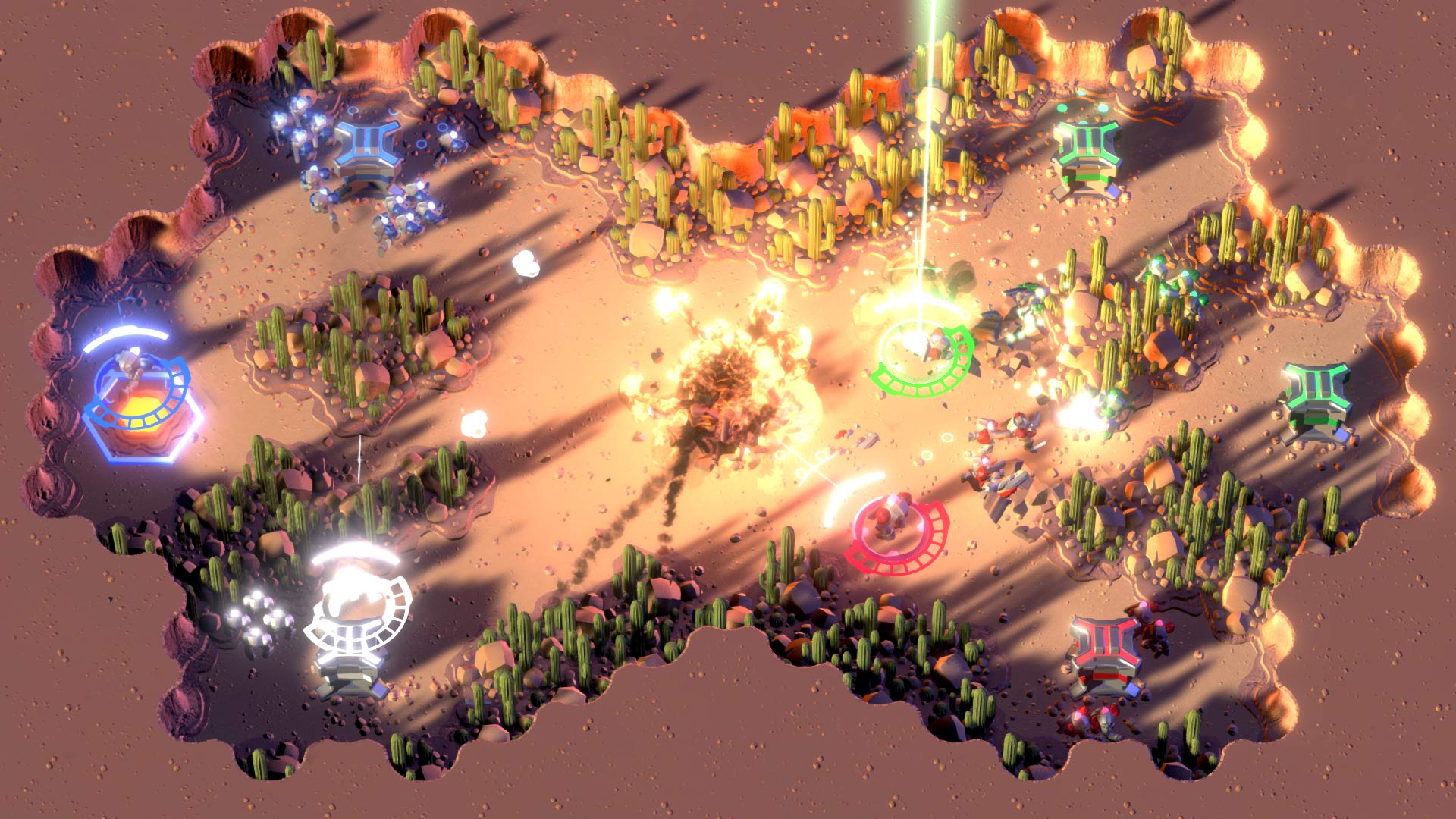 When I first read the words Hellfront Honeymoon and saw it was a twin stick shooter, my little brain hoped that this was in some way connected to HellDivers, one of my favourite isometric Twin Stick Shooters of all time. I wondered if the title was alluding to a game trying to romance me off my feet, send me poetry and chocolates, while gently whispering, let’s kill some aliens together.

In fairness, it starts off promising as it looks like the development team have simply attempted to move HellDivers out of its planet wide coverage, and move it into a two bedroom cosy flat in Manchester, as it is much more compact in both price and execution, even though in terms of value, HellDivers does win by a country mile in terms of the content it has offered.

That is however where the comparison should end, or otherwise this review is going to wear a coat of prejudiced bias, like it is about to go out for a long walk in this bitterly cold month and while there are similarities between the two, there are some distinct differences in how Hellfront presents itself to make you want to take a look at what it has on offer.

Simplicity is the key here when you play Hellfront and you’ll pick up the controls within a few plays. Shoot at things you want to kill. Create a base to give you troops that you can order to go and kill your enemies, or create a turret that automatically kills your troops for you. It’s all very ‘killy’ and while there is a backstory, it’s doesn’t really matter because you’re here for $10 of fun and frenetic action and not some kind of Oscar winning reason to be doing what you are doing. Graphics and sounds are present and serviceable, nothing to write home about and nothing to be angry. Someone spent some time on some decent modelling, it’s really fit for purpose, nothing more really. It does a great job of fitting the theme and doesn’t try to be over flashy. 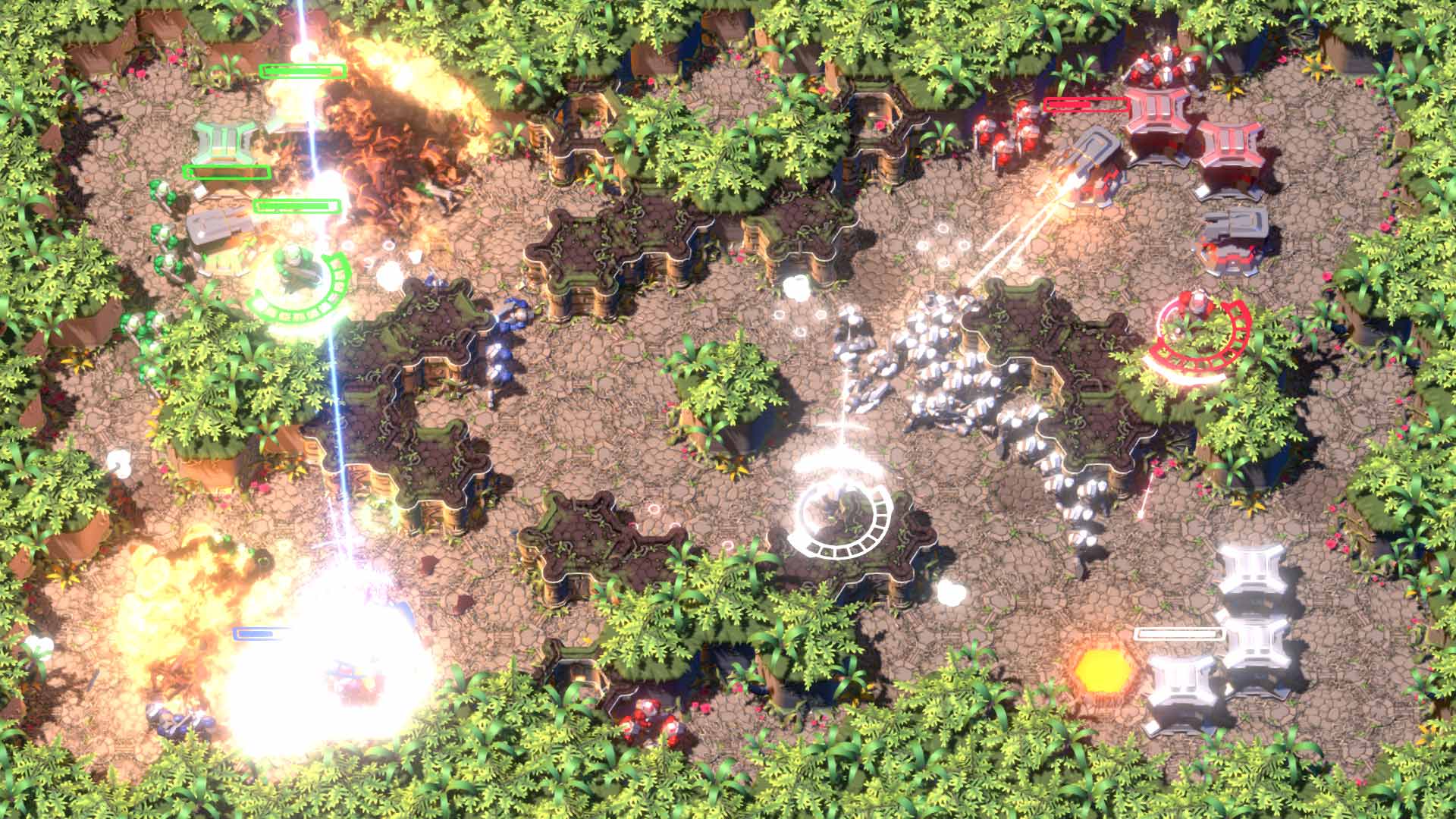 Two modes of play are on the menu, with the campaign mission allowing you to shoot your way through a smorgasbord of levels trying to overrun the enemy headquarters and claiming all of the build spaces available and therefore the match. In an interesting chain of events, you start off in the situation where you are running around, screaming and shooting anything that moves, while later levels require a higher degree of tactics and to which build spots you are aiming to take over.

It adds a certain degree of enjoyable complexity, which on the surface appears to be missing from Hellfront for those who are only willing to dig into the opening of the first couple of levels. Those that stick around will be rewarded (with varying degrees of success) in a more challenging offering, that might find you going back to playing and replaying levels in order to gain the coveted 3 star ratings. If you decide to stick at it. However, don’t expect any other kinds of weapons, this is kind of the vanilla ice cream of shooters. If you wanted strawberry sauce, you should have brought your own.

In my experience with the game, I would suggest you start at the campaign mode and then maybe consider jumping into the head to head multiplayer. Only under the proviso that you’re prepared to be slightly disappointed because there are some bad design decisions that make the head to head mode frustrating and in some cases simply not enjoyable. 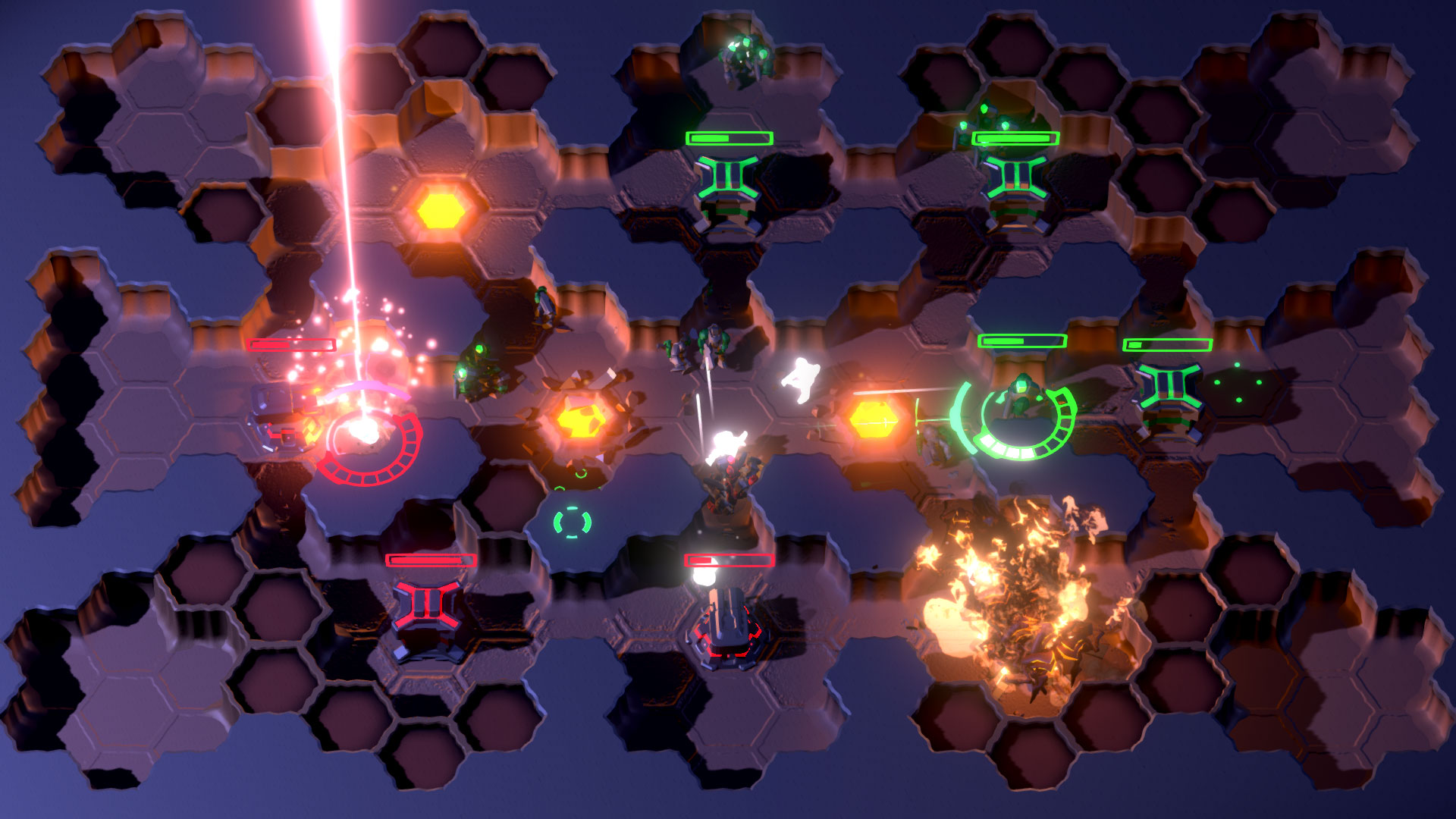 Look, multiplayer isn’t great. In some ways it does the core idea a disservice because of how lacking in fun it can be. More often than not when you end up on the back foot in multiplayer there is little or no way to be able to turn the tide. This is exacerbated by the strange decision to have bugs appear whenever a base is destroyed. Try imagining the ones from Starship Troopers for reference. Then imagine you are trying to take back a corner of the screen, managing to fight off your opponents troops to take their barracks. You’re down to a slither of health, you fire rapidly into the building, blowing it up into pieces. A sense of relief comes over you for 2 seconds until the bugs under the building appear and wipe you out for the twenteenth time. It’s unfair to those trying to catch up, it’s frustrating over a period of time and it all honesty it pushed us back to cooperative multiplayer the more we played. Only because once the battle was heading in one direction, there was nothing that makes you beautiful. I don’t know if it was thrown in as a last minute thing to help with balancing and it simply doesn’t work for me at all.

The other thing that should be mentioned is that for such a simple game in terms of graphics and moving parts, it hit my ps4 like it was trying to run a AAA title. I dunno if it was lack of code optimisation, but as soon as the action started to kick off then my console sounded like a jet engine, something which I normally don’t experience unless I’m playing a much meatier title. It actually shocked me at the time on how much the PS4 had to labour on playing such a simplistic game.

Hellfront Honeymoon is well named. You’ll get some joy as long as you stick to a couple of activities and stay away from the old couple offering multiplayer. This game works best when you’re working as a team, as it falls flat due to some poor design choices when you do argue and face off against each other. If you get a couple of weeks of fun out of the coop and single player then awesome sauce, but apart from chasing the triple ratings, there won’t be too much more to offer. On the other hand, it’s really inexpensive so you won’t feel robbed if you do pick this up as long as you manage your twin stick expectations.

A Twin Stick Honeymoon that may be more like a lover’s tiff.