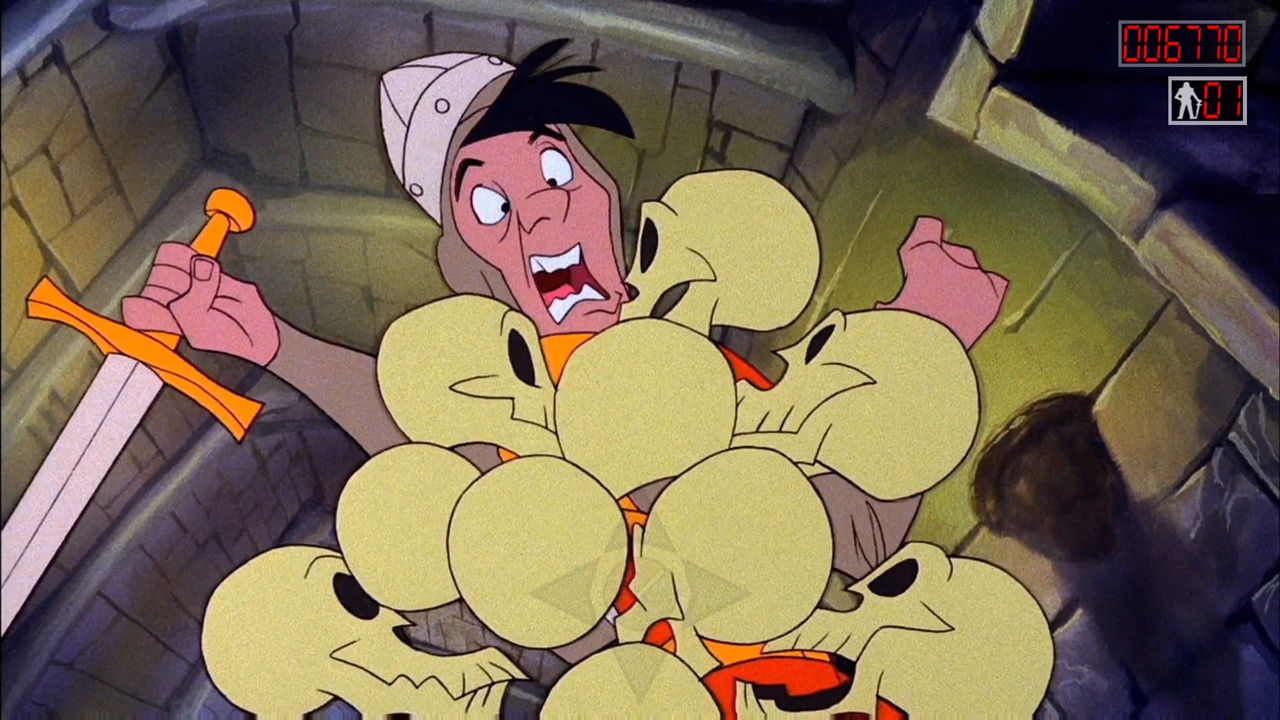 If like me, you were a gamer during the early eighties, then I’d imagine that most of your time was spent down the local amusement arcade with a handful of coins that eagerly fed the latest games. It’s certainly how I spent my time as a young teenager. Amongst the chomping of Pac-Man and the laser shots of Space Invaders, there was always one machine that stood out head-and-shoulders above the competition and drew the biggest crowds around its cabinet. That game was the now classic, Dragon’s Lair. It’s laser-disc technology allowed us to partake in interactive cartoons for the first time ever and it was a style of gaming that had never been seen before. It was certainly a game that ate many of my precious coins. Its success was to spawn a series of similar games, with Dragon’s Lair being followed by the more ambitious Space Ace and Dragon’s Lair II. Now, it’s time to revisit these timeless classics as Dragon’s Lair Trilogy rescues a release upon the Nintendo Switch.

Although the title suggests that what we have here is three Dragon’s Lair games, the truth is we only have two, with the third title being Space Ace. However, whether you were one of the kids who crowded around these arcade games, or are a newcomer to the series, each of these games contains a timeless quality that makes them instant classics and hold a premise that should not be missed, despite their age. This new collection of the three games contains the original laser-disc imagery; one that appears to be of a sharper quality, both in terms of graphics and sound. They also contain a number of extras, such as gameplay tweaks that grant extra lives or easier difficulty levels, as well as promotional videos and developer interviews that provide a backdrop to the creation of these infamous games. 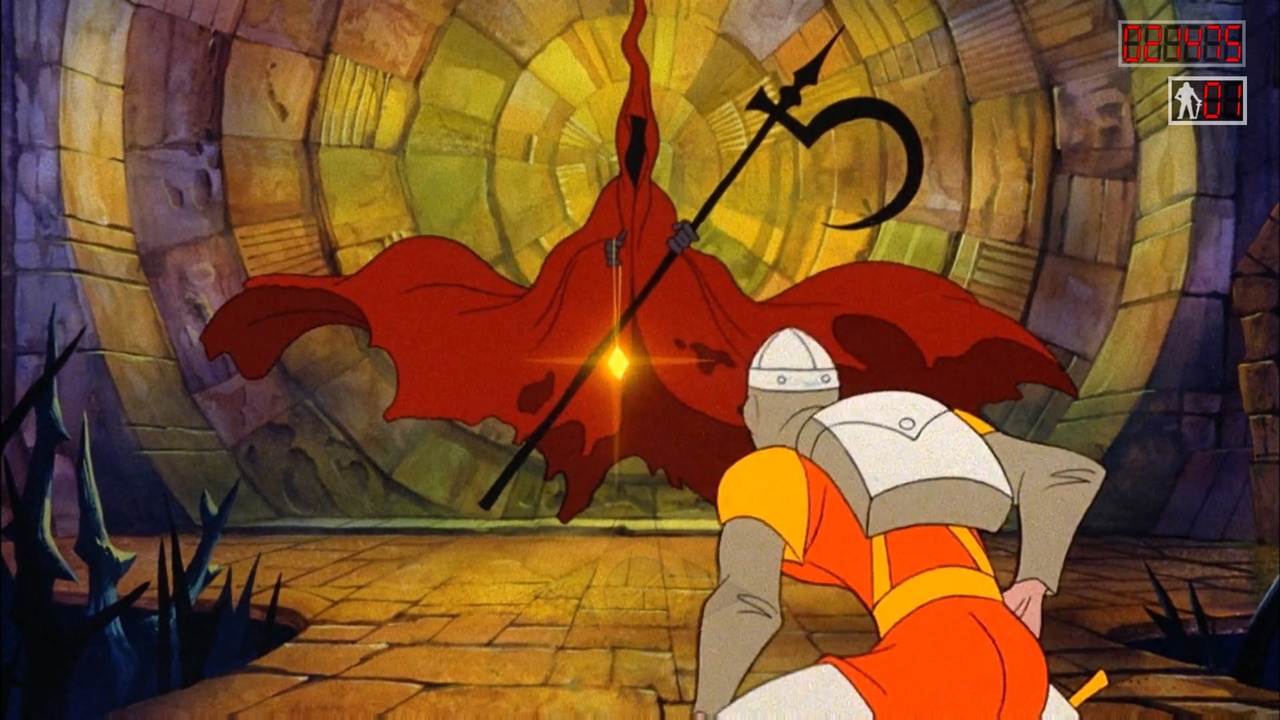 Whatever title you play, each one plays in a similar fashion. Much like the QTE mechanic, or quick-time events found in many other games, an on-screen marker denotes a direction that needs to be input via either the D-pad or left joycon; with a sword action that is activated by pressing the A button. That’s all there is to it. It’s a simple premise that, although creating a game that lacks any depth or real gameplay, does contain that one-more-go element and an addictive quality in working your way through each of the adventures. In terms of how we play games today, these are certainly a series of games that show their age, at least in terms of playability, but don’t let their age or lack of depth put you off experiencing these games, as they contain such charm, that they’re simply irresistible.

Although the three games on offer here contain distinctly different stories, or adventures, they do all run along a similar theme; namely the rescuing of a damsel in distress. In Dragon’s Lair, you play as Dirk the Daring as he enters a mysterious castle that is full of all sorts of perils in your quest to rescue the Princess Daphne. In Space Ace, you play as Dexter “Ace” in his quest to save his sidekick, Kimberly from the clutches of the evil Commander Borf and Dragon’s Lair II reprises your role as Dirk the Daring as the Princess Daphne once again becomes captive; although this sequel contains a much elaborate story with branching pathways and a time-travelling theme.

The games work in presenting a series of scenes that require the correct input in order to traverse them. It’s here where much of the fun lies within these series of titles, as you begin to learn the order of sequences you need to input in order to progress to the next scene and further into the game. Should you fail to complete a particular segment or scene, then the beauty of this game allows you to carry on from the failed scene, creating a promotion to keep you playing further. As well as this, the game also contains an auto-save function that allows you to carry on from where you left should you need to leave the game. Although the game contains these two functions, each of the titles, depending on your reflexive actions and experience, can be completed within fifteen to thirty minutes each; although they possess such replayability, you’ll never get bored of playing them. 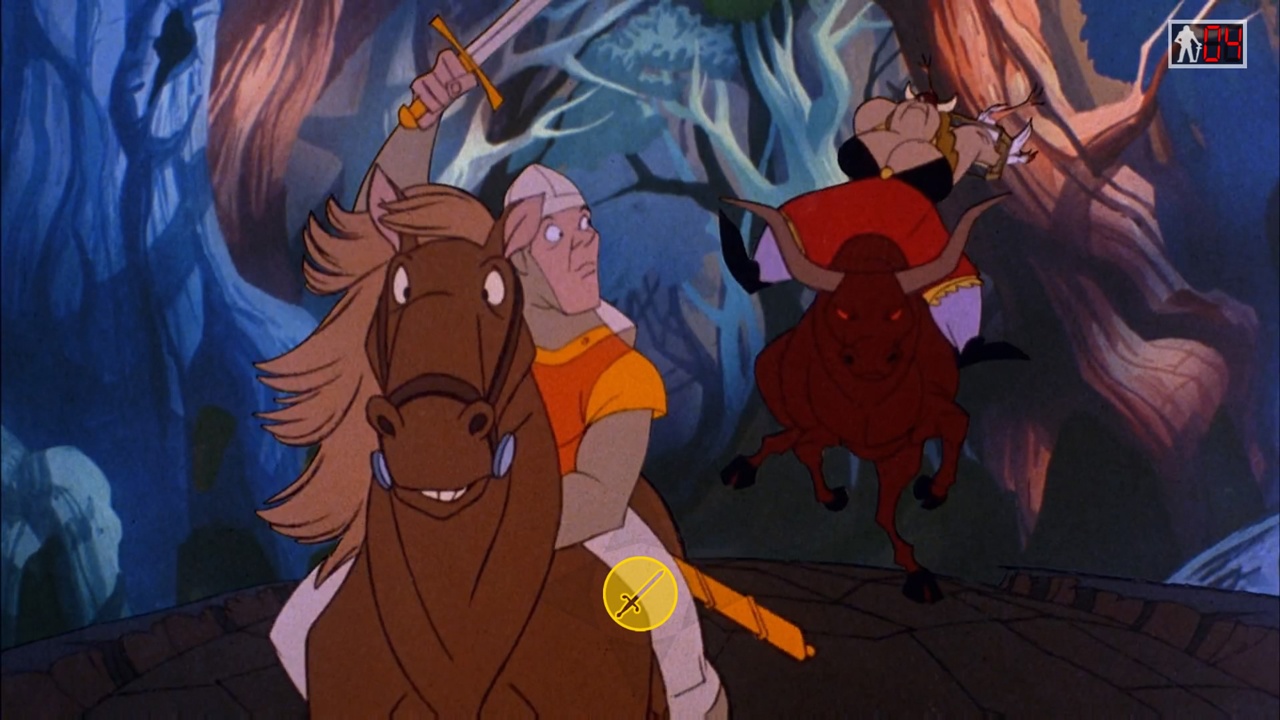 The key to success here lies in how quick you can input the desired location or sword swipe function. Some scenes require lightning reflexes in directional control or button activations, but their patterns can soon be learnt. To help mix things up, some scenes can be repeated, but played in a reverse action to keep you on your toes. However, should you find things too difficult to master, then each of the games also contain a number of options that can increase your number of lives and delay the time needed for inputting the desired controls; making it a more accessible game to all levels of gamer. Other options also include cosmetical changes, such as a border that mimics the original arcade cabinet, the promotional videos that used to play throughout the arcades and documentaries to give an insight into the history and development of the titles.

Overall, Dragon’s Lair Trilogy is a very welcome addition to the Switch’s library and a series of games that sit perfectly upon Nintendo’s console. Whether you’re a seasoned vet of the games or a newcomer to their style of play, there’s a lot here to appreciate and love. If there are any downsides to the titles on offer here, then it has the style in which they are played, as your concentration lies solely on focussing on the input displays rather than the on-screen action, but in time and as you begin to learn the sequence of events, you can be become braver and play the game without the need to watch the input controls and watch the cartoon through as it was intended. This may be a retro game, in the sense of the word, but this is a series of titles that have withstood the test of time and are as much playable now as they were when they first came out. The level of challenge remains the same, as does the level of playability and charm that each of the games possess. If you’re a serious gamer, then you simply can’t afford to miss out on this collection of some of the finest games ever to be made.

Reprise your roles as Dirk the Daring and Dexter “Ace”, as you embark on your quests to save the Princess Daphne and Kimberly in this timeless trilogy.