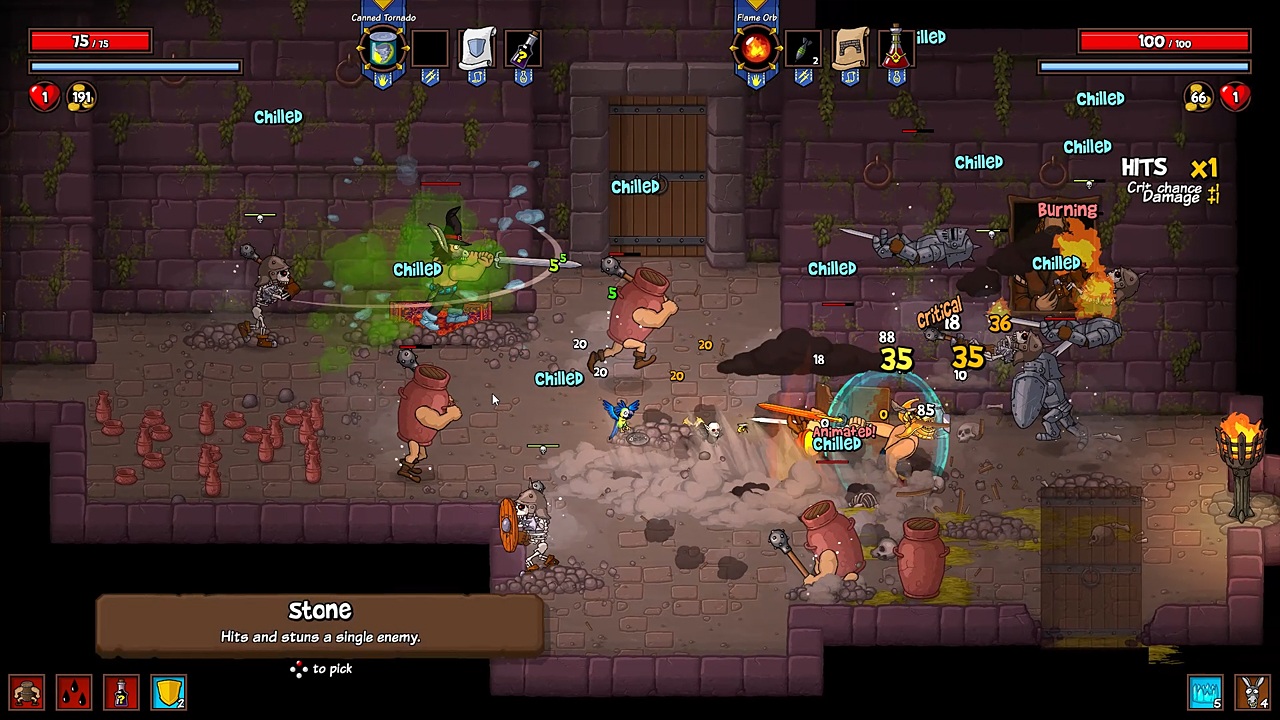 No matter how far we go on the Switch, no matter the amazing advancements in technology and big name publishers signing on to make their next dramatic productions available to the Nintendo faithful, we always circle back to roguelites. Makes total sense when you look at the formula. Portable gaming for games that consistently deliver a new path every single time. Hell, the fact that you can break off JoyCons from the system and suddenly you’ve got two players fully equipped is still something I can’t get over. So the enticement of a roguelite, cooperative beat-em-up is hard to resist, and I’m happy to say that Rampage Knights is an incredibly effective and entertaining game.

The premise is fairly simple: heroes are on their way back from some big loot when they get caught in a magical forest. No matter what they do, they can’t seem to break the spell because they just keep going down the same path of the forest, into a castle, and down into the dungeons and beyond. They’re besieged by monsters, traps and massive bosses at every turn, and, in the end, their deaths simply put them back at the beginning of the forest. So it’s up to you and, hopefully, your friends to make it through room after room of nonsense and heartache in an attempt to get your freedom by any means possible.

Rake in Grass, the developers of Rampage Knights, wanted to make a love letter to Golden Axe with their design, but I’m happy to say that the title is far from as simplistic as that 16-bit era design would suggest. Starting out, the meat and potatoes of this game boils down to the combat and controls, and things are fairly well balanced in terms of how to play and how to get a grip on things. You have only one button for “attacking,” but mixing in directional pushes, longer button holds and combinations with other gestures makes for a more dynamic flow to your comboing off the various baddies that pop up. You swing, you strike, you stomp on people, grab them and swing them around like hammers, and bring death from above with dramatic, leaping attacks. You also pick up various items that can be used in combat, from ranged, one-time-use tools (rocks, bombs, throwing axes) to familiars that float around and do your dirty work. I can honestly say that you don’t need any of those additional items to make things work in the game, simply because the jumping slash is your best friend throughout the game. It breaks shields, it disrupts arrows, it keeps you from getting cornered too long when the mobs descent. If rolling is the key to victory in Dark Souls, then leaping like a goddamn jackrabbit is the magic of Rampage Knights. 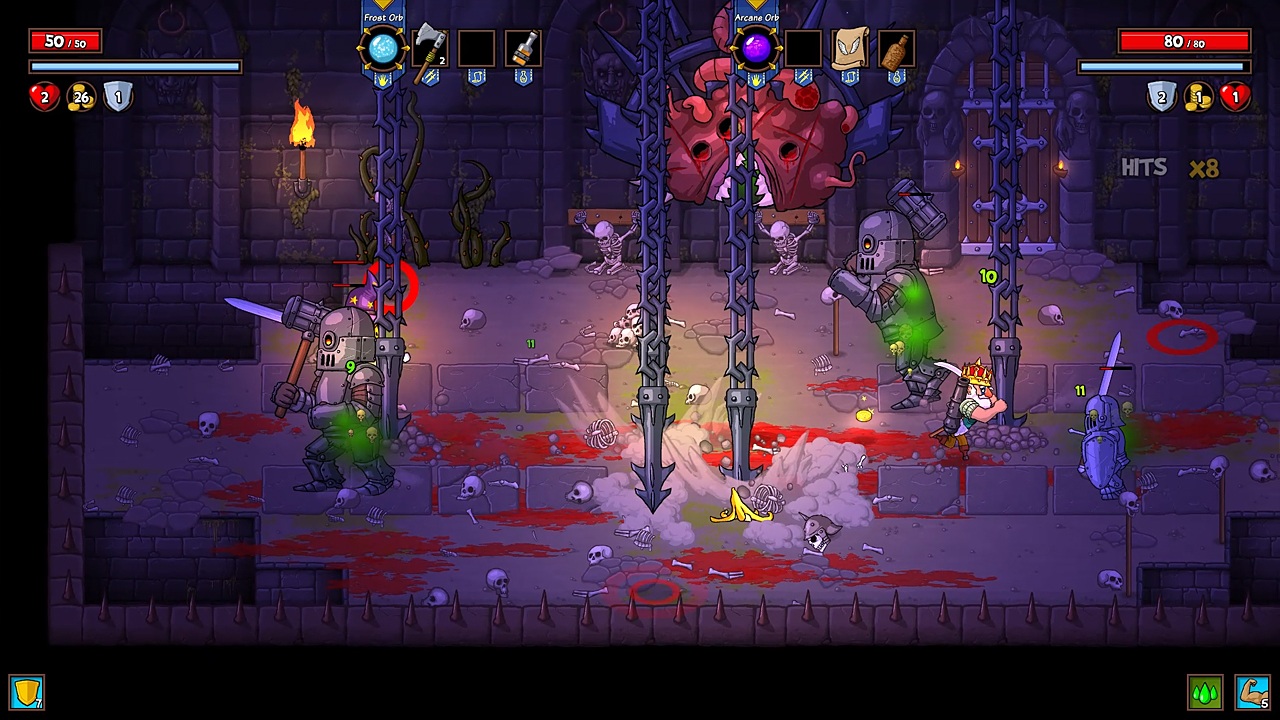 As a roguelite, you also need to be aware of the everything and anything that the game would throw at you. Sure, there are plenty of different enemies, from your standard grunts with swords and shields to witches that cast spells, armored lizards that are resistant to poison, and frigging zombies that will start digging and find a new body unless you curb stomp their heads after dismembering them. There are rooms where you’ll find a cursed game of cards that can reward and penalize you in a hot second. There’s a wheel of misfortune where you actually pay to find out what terrible thing is about to befall you. Minibosses crop up as tall, brutish things that deliver terrible amounts of pain, and that’s well before the actual bosses, who are also randomized in when they appear. The first time, I got beat to death by a horrifying entity that lived inside an Iron Maiden. The second time was some kind of alien variant of a Borg sphere called Legion, and that just SUCKED to get through. After you get your butt kicked enough times, you’ll unlock the ability to go down a difficulty level, which helps out a ton if you’re just trying to see what you can do, since your death brings you back to the start of the level instead of the very beginning of the game. Even still, it’s a bit of a slog.

But, as anyone who’s entered the Gungeon or gone to save Isaac will tell you, it gets better as you play more. And that’s true of Rampage Knights as well. Doing various achievements will unlock new character classes, each with their own specialties and weaknesses. The gold that seems so pointless will suddenly become a boon when you discover your first merchant that sells you new weapons and armor and even enchantments. You start swigging potions even when they say they’re cursed because there’s a couple of weapons that do far greater damage the more you’re cursed. You love the barbarian class because it hits harder, then you HATE it because you can’t equip that awesome Elven armor you found. You make the call between throwing poisonous darts or bombs, and you agonize over whether the Ass Potion will turn you into a donkey (which occasionally kicks enemies across the room) or a literal ass face (which might have some kind of benefit?). At one point, I had a stick that just dropped three bombs every time I swung it during a leaping attack, and I had gotten a springy jump, so I just cartwheeled across the screen, sewing seeds of death like the worst bombardier in history. It gets ridiculous the more that you find modifiers, and that just makes it better. Who doesn’t want to be drunk, constantly running, covered in blue berserker paint and just throwing the 28 rocks that I picked up over the course of the game, simply for the fun of it? It’s silly, and I love it. 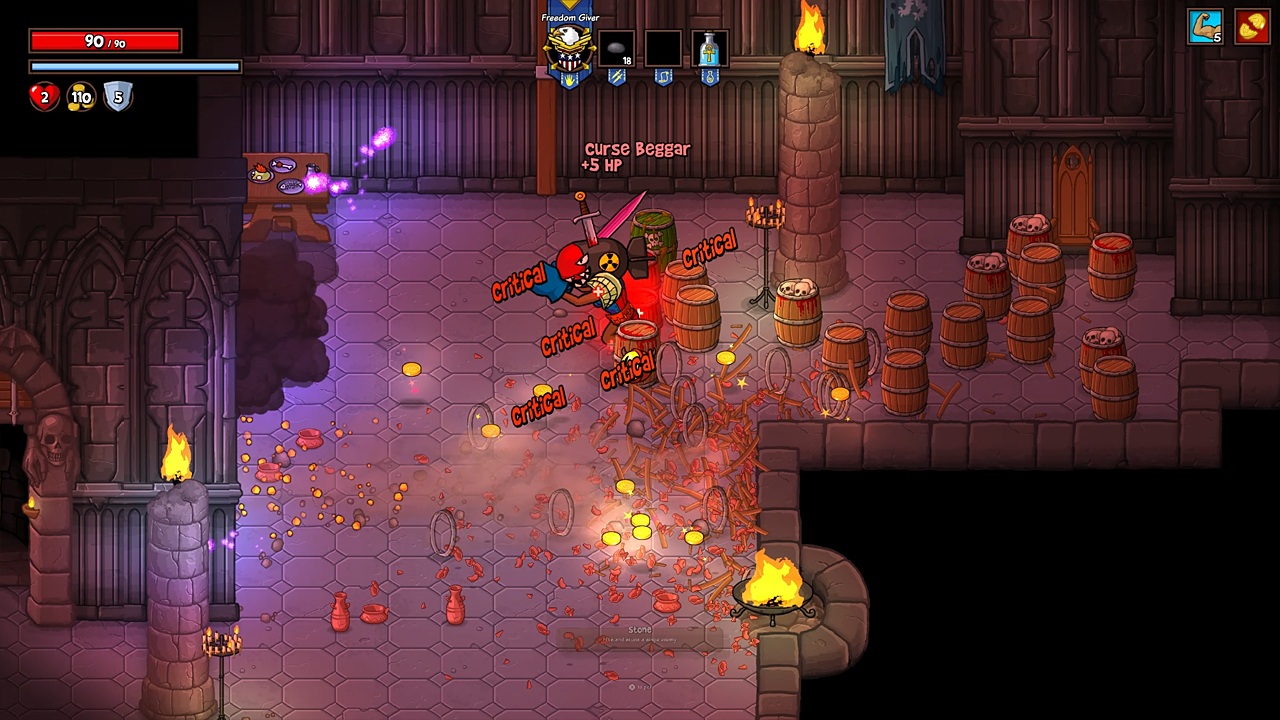 As you may have also guessed, this is one of those titles where the cooperative angle makes it that much better. You can absolutely solo your way through the game on normal and lower difficulty settings, but aiming for the brass ring of higher achievements and such means needing to have a friend or three along for the ride, and it’s worth the tradeoff of needing to occasionally give up loot to a friend. While the enemies never become overwhelming while playing alone, you do end up with a keen sense of getting lost in a pigpile, and you’d rather have someone to draw at least a bit of the crowd so you’re not totally swallowed up in the muck and mire of eight bats, three giant eyeball stalks and a turret that spits out poisonous muck and affects literally anyone in its path. You want a friend to deal with that nonsense as well, if only to have someone to commiserate with.

The nod that Rake in Grass makes towards the Binding of Isaac felt odd initially, but, after a few hours with Rampage Knights, I can see the comparison. You need to have some knowledge about the lay of the land, the potential combinations that happen, and some hard-learned tricks of the trade to get further than the first couple of bosses. You have to have plenty of misfires attempting to pick a treasure chest in record time to weigh whether it’s worth trying to do or not. The game is far from perfect, but I’m honestly hard-pressed to find something to complain about other than the normal “randomized” complaints (some familiar rooms crop up too often, you gotta play a LOT to unlock all the character classes, I keep falling into pits, etc). Basically, if you like brawlers with equipment, love hitting people with other people, and have a friend to come and test Ass potions for you, then Rampage Knights is good, clean, hilarious fun with a long, long future ahead of it.

It certainly isn’t the prettiest game out, but Rampage Knights does roguelite brawlers right, and offers players a real chance to find addicting action within.