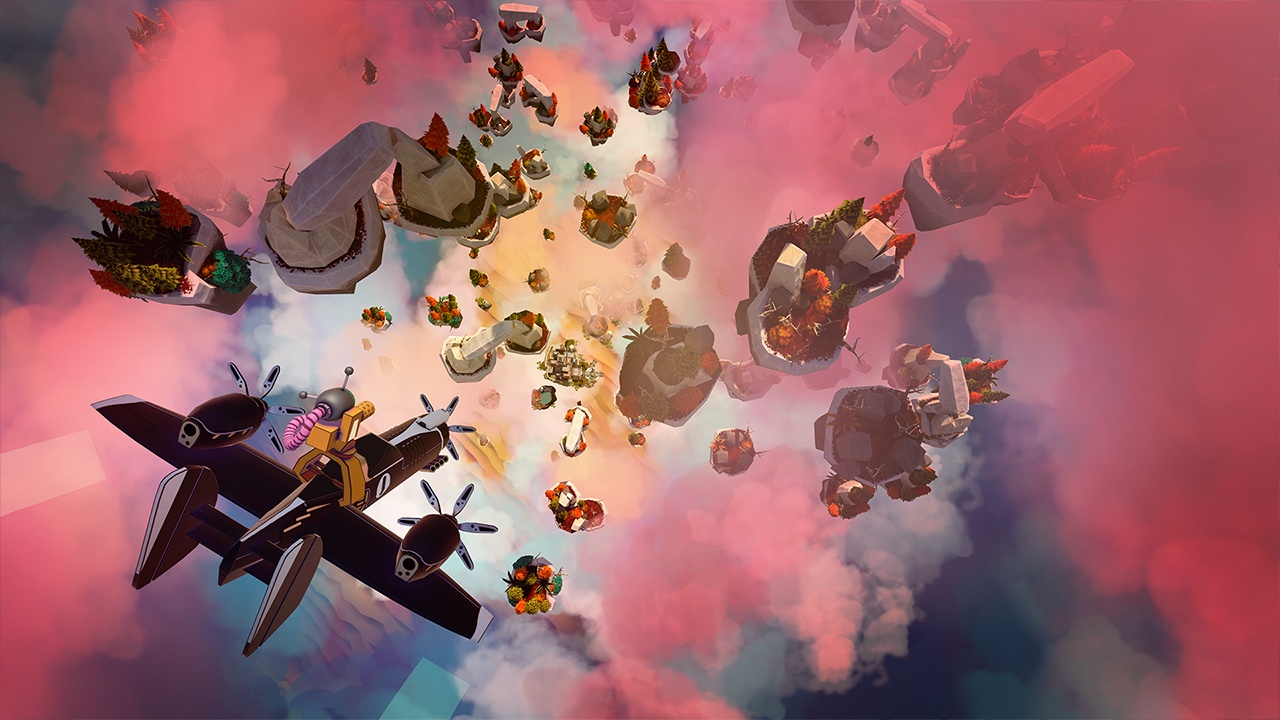 In 1928, Amelia Earheart, pronounced “Airheart”, became renowned for being the first woman to fly solo across the Atlantic. This feat earned her worldwide fame and stature during a time when women were deemed to be less superior to men. Her exploits are re-imagined and act as an inspiration for Blindflug Studios’ new title, Airheart: Tales of Broken Wings as it flies a solo release upon the Nintendo Switch.

Although the world-record breaking feats of Amelia Earheart have loosely inspired the conception of this game, it isn’t a game that is based on her achievements, but is solely used as a loose base for the protagonist’s name and its themes of flying aircraft. In reality, this is a game that is as far from reality as you can get. Based around the floating islands of Granaria, you play as Amelia Airheart who begins a new life amongst the clouds. The game plays primarily as a twin-stick aircraft ahooter, set amongst a steampunk background with a touch of role-playing and the good old classic formula of a shmup.

The main premise of the game revolves around the art of Sky Fishing; the city’s main industry. It’s a dangerous job, one that is plagued by the scourge of sky pirates and the legend of the mysterious Sky Whale; a mythical creature that Amelia vows to track down. In order to reach such dizzying heights, Amelia must navigate her way around the floating islands by catching skyfish, as well as avoiding the unwanted attention of the pirates. By collecting skyfish, you accrue currency that is used to develop new parts for your aircraft, thus increasing its capabilities to allow you to fly higher into the stratosphere and closer to your ultimate goal of capturing the Sky Whale. 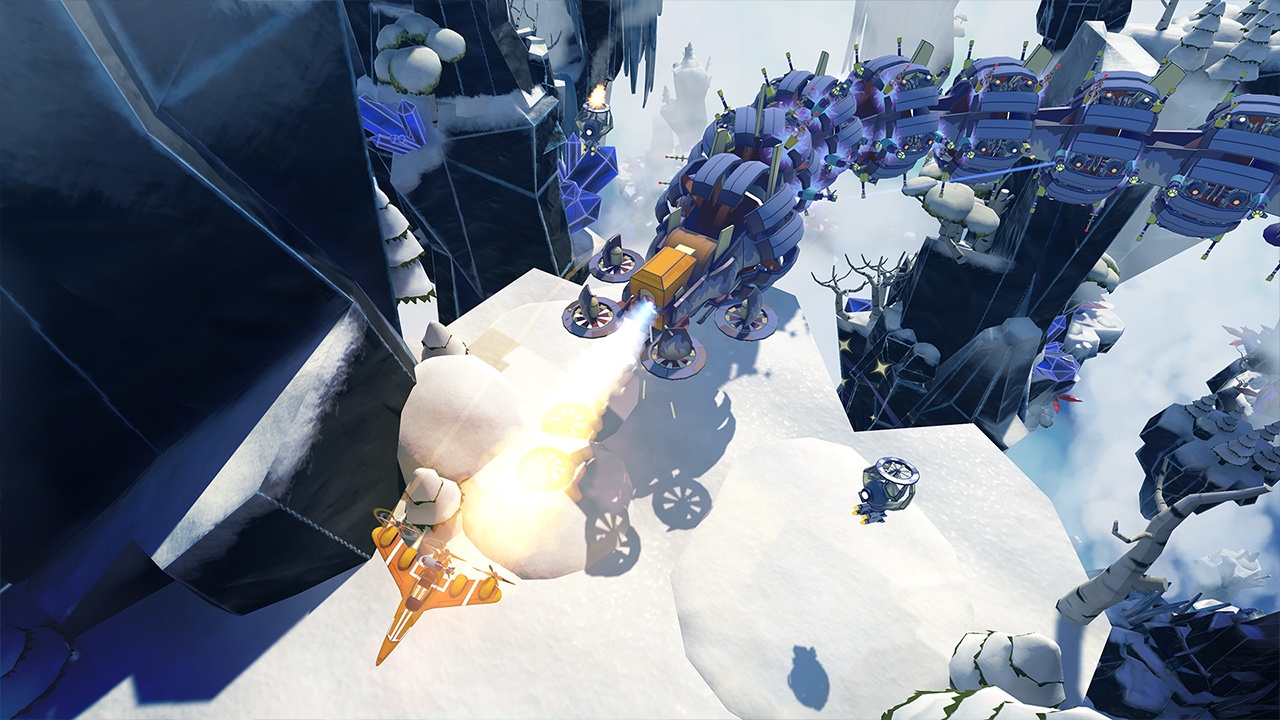 You begin the game with a brief tutorial that outlines the controls and mechanics of how the game plays. By using the left joy-con, or analogue stick, you control the movement of your aircraft in a series of twists and turns. Being a twin-stick shooter, you aim with the right stick, whilst pressing ZR fires your weapons. It’s a simple premise that makes the game accessible, especially if you’ve played twin-stick shooters before, although the gameplay itself is much less forgiving. You also have access to a harpoon-style weapon that is fired with the ZL button, but in reality, this is a function that is rarely used within the game.

Levels are presented as layers; in that each layer represents a different altitude that brings new islands, skyfish and far greater dangers. Once you’ve sourced one layer of all of its skyfish, then you simply fly higher to find a new source in order to fund the development of your aircraft. However, you can also collect items, such as oil drums, to further enhance your projects, as well as collecting valuable loot that may be dropped by destroyed pirates; forcing you switch between an offensive and defensive style of flying on order to maintain the best quantity of loot and currency for easier progression.

When you’re not flying, you find yourself within your workshop where you can begin working on crafting a series of upgrades for your aircraft; or even a new style of aeroplane to give you better advantage over the pirates and a easier implementation of collecting skyfish. This soon becomes an important factor within the gameplay, as taking too much damage from pirate attacks sees you plummeting back down to the blazing deserts below. However, despite the fact that your plane can take a punishing amount of damage, should you find yourself in too much difficulty, the game does offer you a warning of impending destruction; allowing you to vacate the area and return to your workshop where you can harvest any gained loot without the loss of progression. 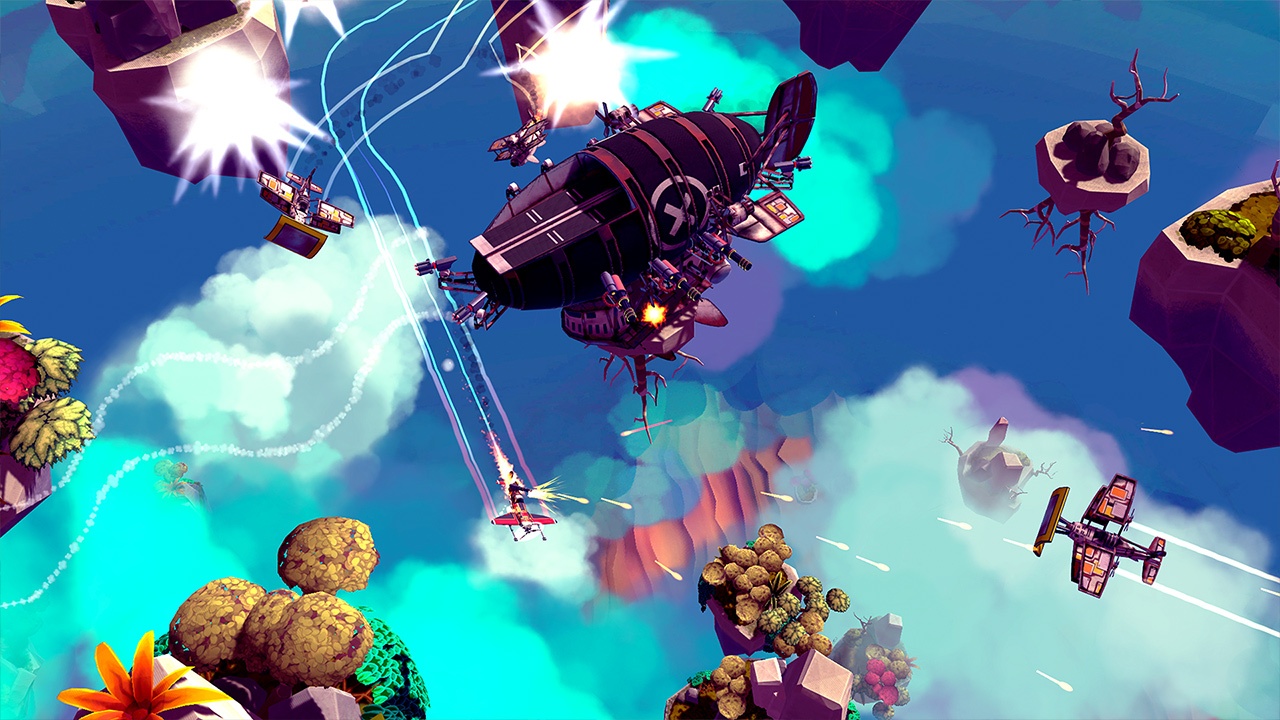 It plays in a rogue-lite fashion; with a permadeath mechanic, depending on your chosen level of difficulty and a constant running of upgrading your craft in order to make it fit for progression amongst the ascending set of floating islands. It promotes a cautious style of play, as well as a factor of risk-taking. However, because of the nature of its style of play, it’s also a game that requires a lot of repetition and grinding; especially as progression brings more expensive upgrades and a lack of substantial funding. It also has to be said that a lack of any real meaningful story brings the game down a bit, with its repetitive nature, there simply isn’t enough going on to help push you along to reaching the game’s conclusion.

Despite these minor setbacks, the game itself does look and play gorgeously. The whole presentation of the game has been expertly done here and there is some fun to be had with the game; especially as you begin to develop more powerful aircraft and weaponry and explore the detailed and colourful islands that stretch skywards for as far as the eye can see. However, its initial enjoyment is one that soon begins to wear thin as you rinse-and-repeat the same style of gameplay across each of its levels. In terms of its style, I can only really recommend the game be played in a casual capacity, as there simply isn’t enough variety of story to truly sink your teeth into or invest yourself in an immersive way.

Overall, Airheart: Tales of Broken Wings is a game of lost potential. Yes, it is fun in places and looks absolutely gorgeous, but its repetition soon produces a lacklustre experience that will have you looking for gaming excitement from another source. It’s a game that’s best revisited from time-to-time, as there is most definitely something here to enjoy. Its visually stunning and easily accessible with some satisfying flying to fish and weaponry with which to combat, plus its perma-death mechanic on the higher difficulties can bring some suspense. But in some of its elements, there simply isn’t enough, making the overall feel of the game as if there is something missing; and this may something that you might find, but then again you might not. In short, this is a game that does get off the ground, but fails to elevate you to any heights of greatness.

A charming rogue-like that soars in some of its gameplay; yet takes a nose-dive with its constant grind and repetitive nature.