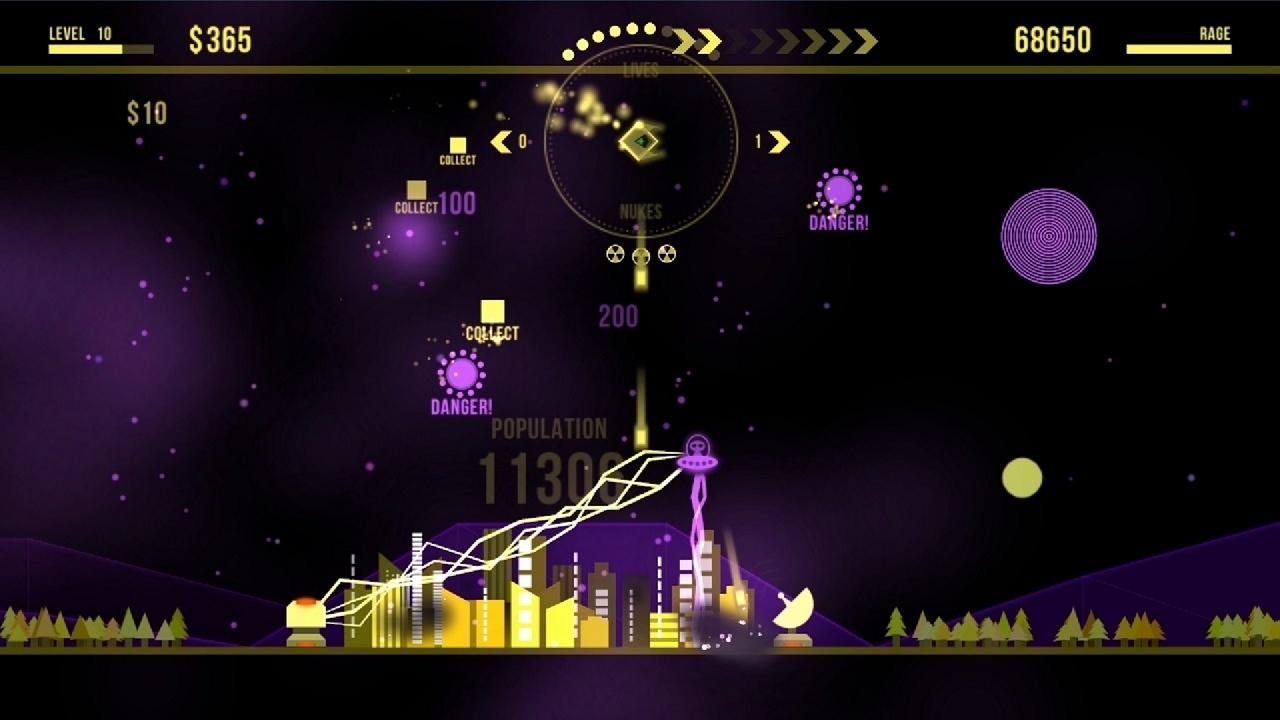 When I first picked up Paladin, I had no idea what to expect. Through no fault of their own, Pumpkin Games Ltd has chosen to debut one of their fantastic, retro-inspired shooters with an appropriate title that, sadly, is one letter off from another, fairly popular game. It’s a perfect storm of terrible coincidences. Paladins is free to play and on the Switch, so there’s that tick. “Pumpkin Games” is a popular term to research when looking for Halloween ideas at your school and there isn’t currently a page available on Nintendo’s home page, so it might be invisible to all but those who know what to look for. So I mean this in the best way: Paladin may ultimately become a hidden gem on the Switch both in terms of quality AND in terms of being able to find it.

Inspired by a lot of the classic arcade situations, specifically Defender and Space Invader, Paladin puts you in the helm of the last spaceship on Earth, the sole defence between an alien invasion and total annihilation. Like all great space battles, the odds aren’t even remotely fair, and you’ll have wave after wave of incoming aliens who continue to increase in number, difficulty, and attack strategy. Starting out with random wanderers, you’ll quickly elevate to shielded defenders, ships that shoot at you, ones that drop essentially “air mines” and ones that make impassable barriers in the night sky. Oh, and there are UFOs that are actively attacking the cities below and killing people off by the hundreds. You gotta deal with them all. Alone. Someone at the State Department really screwed up in partitioning funds for the Air Force, but whatever, we’ll either survive or all be dead soon. 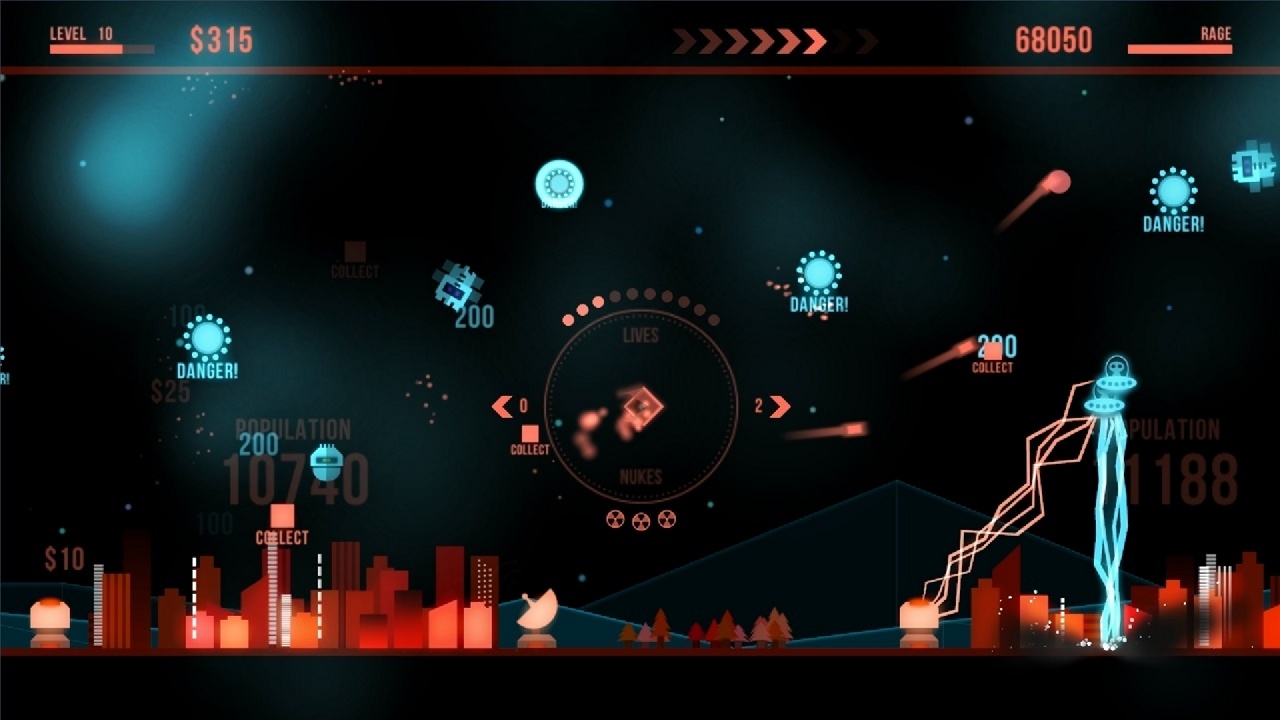 Paladin absolutely celebrates its classic aesthetic by keeping things carefully balanced between retro and modern. Sure, the enemy designs and outlines tend to be more on the minimalist side, but we’re not talking Geometry Wars, more like a very smooth, fluid, neon shooter you might see on the Atari 5200. Instead of remaining in a fixed space or limiting your range, you have multiple screens of scrolling left and right, along with a twin stick approach to dealing with the hordes. This becomes essential in all of the game modes, as you never have foes coming at you in a straight line. Instead, you want to try and lure them as close as possible so that you can easily chain them together and fill up your “Rage” meter. When full, the Rage meter allows you to unleash a timed boost of stronger, longer and faster shots, making clearing the room that much easier IF you’re a good shot. Rage doesn’t automatically indicate success: if you’re poor at your aiming, you’ll just die angry. Rage is also a great way to deal with the first couple of bosses, who crop up on milestone waves to remind you that the game is getting more difficult all the time.

But the thing is, Paladin doesn’t need to remind you that it’s hard: it just always is. Sure, there’s an adjustable difficult level, but it’s like choosing your level of heat at an authentic Indian restaurant: anything higher than one becomes an experiment in pain. After the first wave, it becomes incredibly difficult to survive an entire segment without taking a hit, and I’m saying that as someone who has been playing shooters on the Switch an insane amount of time. You’ll find that the floors and ceilings won’t kill you if you touch them, but they do prevent you from manoeuvring as widely as you’d like when enemy fire is coming in. The alerts when the UFOs begin destroying the cities immediately elicit a “gotta get over there!” response that often means you’re not paying enough attention to where you’re flying. The boss waves are honestly a relief, because I can deal much better with larger ships than all the small ones. Also, I learned quickly that you want to choose a ship that matches your play style in order to make the most groundwork. Having a fast ship is great, sure, but you ever had a Boa ship with some dual blasters right from the start? That’s how you make things sing in your favor.

Additionally, the Adventure mode of Paladin is simply fantastically huge. You’ve got about forty levels, which doesn’t sound like much until you realize that you need to do all forty with all seven ships to consider that mode “complete.” Every stage ends with you taking the cash you got from alien blasting and heading back to the shop to figure out what you want to invest in. Upgrade firepower or fire rate? Give the cities some defence themselves or drop on some nukes so you can clear the screen once? And you’ve got two lives already, but do you think buying one more might be the difference between living and dying? The shop mechanic itself is a head scratcher, as you carve out your own direction in terms of balance and how you plan to succeed. There’s a chance that you’ll find yourself at level 16, with all your money dropped into the biggest guns you can make, but you don’t have 50 bucks for a second life and you just keep sucking out and need to start again from the beginning. It won’t take you too long (you can probably do your first run from start to finish in under two hours), but scrapping everything to reboot is awful. 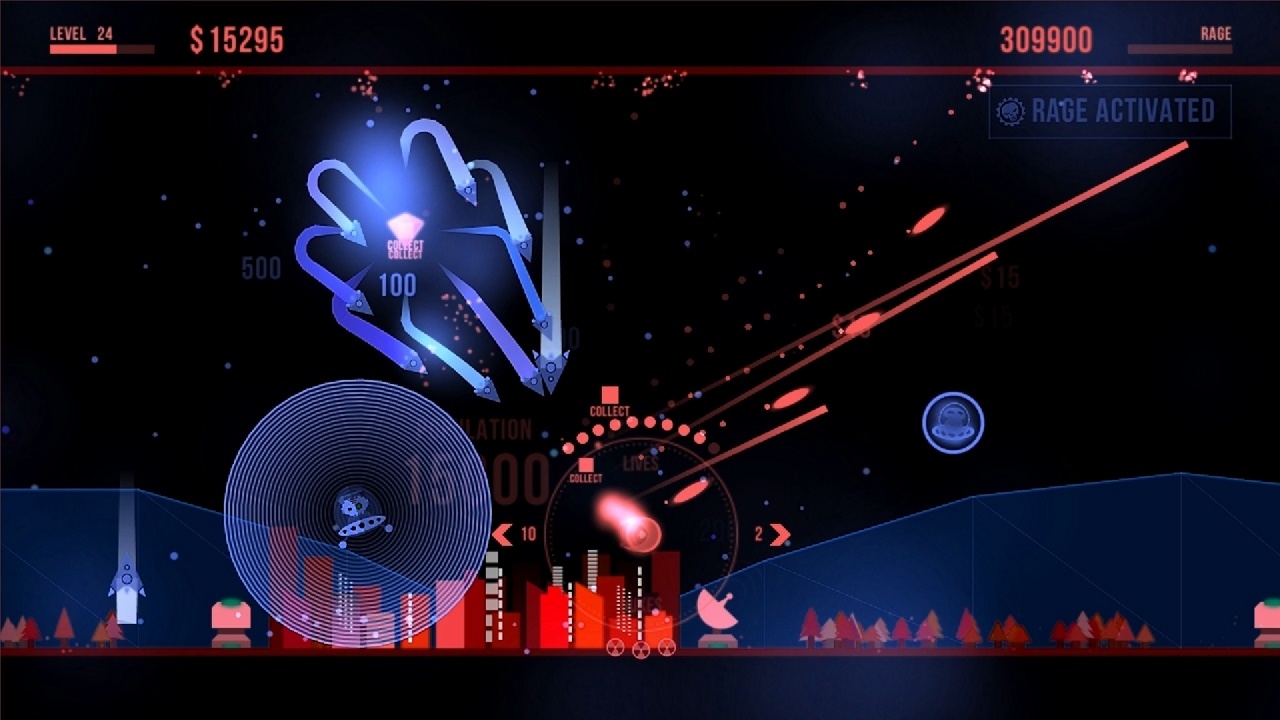 Paladin does a lot to keep you interested outside of Adventure mode. There’s score attacks with limited time but unlimited lives. There’s survival, where you just need to fight off wave after wave while your rage and score increase. There’s a different time attack where you gotta just keep those people in their cities and not in the belly of a spaceship. And, my personal favorite side mode, Guardians, where massive spaceships come at you in a true “us versus them” limited mode. It’s properly challenging, and really gears you up for having to get through Adventure mode in a second ship that maybe you aren’t as comfortable with.

If you’ve been a fan of twinstick shooters but want a different take on the gameplay, Paladin is definitely where it’s at. The gameplay is addictive and smooth, I only got nagged for online scores ONCE when travelling before the game shut up and didn’t ask me again (WAS THAT SO DAMN HARD?!,  and the whole thing is scored with some really sick electronic music that I’m guessing is dubstep. I honestly don’t know my electronica, deep apologies. The point is, Paladin is a crazy amount of fun and contains a massive amount of replay value for a very minimal install size. Switch owners with a taste for the twinstick will deeply enjoy this, and I hope that people will be able to find this game when it launches.

This neon shooter does an outstanding job of keeping tensions high, the action fast and the rewards for well contained rage quite worthwhile.