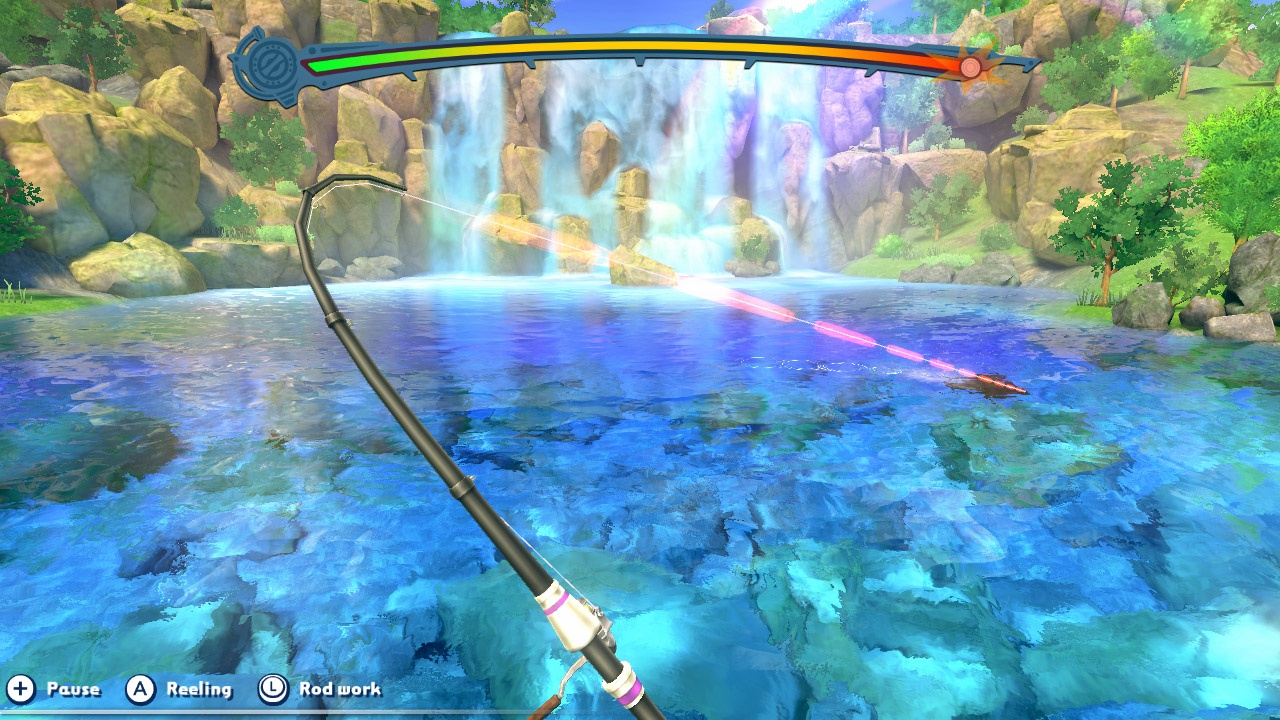 Even though I don’t often play sports games, there’s a certain amount of fresh air that comes with changing it up and giving one a try. And I don’t mean something like Mario Tennis Aces, where there’s this awesome storyline and adventure mode and all that jazz. I mean like the recent rash of bowling games that I’ve invested time in where the objective is simply to bowl. It’s great fun, and, when done correctly, these sports games, especially individual sports, allow for a lot of escapism in a more active and exciting way. So, for the would-be fisherman, there is a ton of joy to be found with Fishing Star World Tour.

Fishing Star World Tour comes to us from Wright Flyer Studios (often shortened to WFS), a solid Japanese group that’s been releasing mobile games for the last four years or so, and has gotten quite famous for their mobile fishing game. While this might seem like a strike against a console port, I’ve seen the quality of the mobile games and it’s got the right amount of incentive to play; graphical quality and easy adaptability to make them addictive without being trash. Fishing Star World Tour, by comparison to some of their other titles, has zero in-game purchase options or that sort of underbelly practice that might otherwise mar a good-looking title. In Fishing Star World Tour, you’re fishing. That’s it. You got a boat, you got a ton of locations around the world in a bunch of beautiful vistas, and you want to catch all the damn fish that exist. In order to get better and find bigger fish, you have targets for each area that must be reached before you can go onto the next locale, and you gotta fish all the ponds in one neck of the world before heading somewhere else.

Visually, Fishing Star World Tour does a great job of adding detail, color and some realism to the fish and the environments without going too heavy in one direction or another. In my own personal opinion, I think a majority of fish are ugly as sin, so it helps for the animals and creatures that you’re catching to be easily identifiable without being too to scale, as the pun would go. While the fish certainly don’t have giant, cartoonish eyes or anything like that, you’re able to get the very clear distinction and breed of every fish without needing a National Geographic examination. For example, one early area has you trying to catch a run-of-the-mill goldfish in order to move on, and you get to gnash your teeth in frustration as you pull in a panda goldfish, a globe eyed goldfish, and even a damn shrimp before you finally get the goldfish you need. And they all look very different once they’re in your boat. Out in the water, they’re just shadows that have a variety in shape and size, but definitely lacking the detail to tell you EXACTLY what every potential catch is. 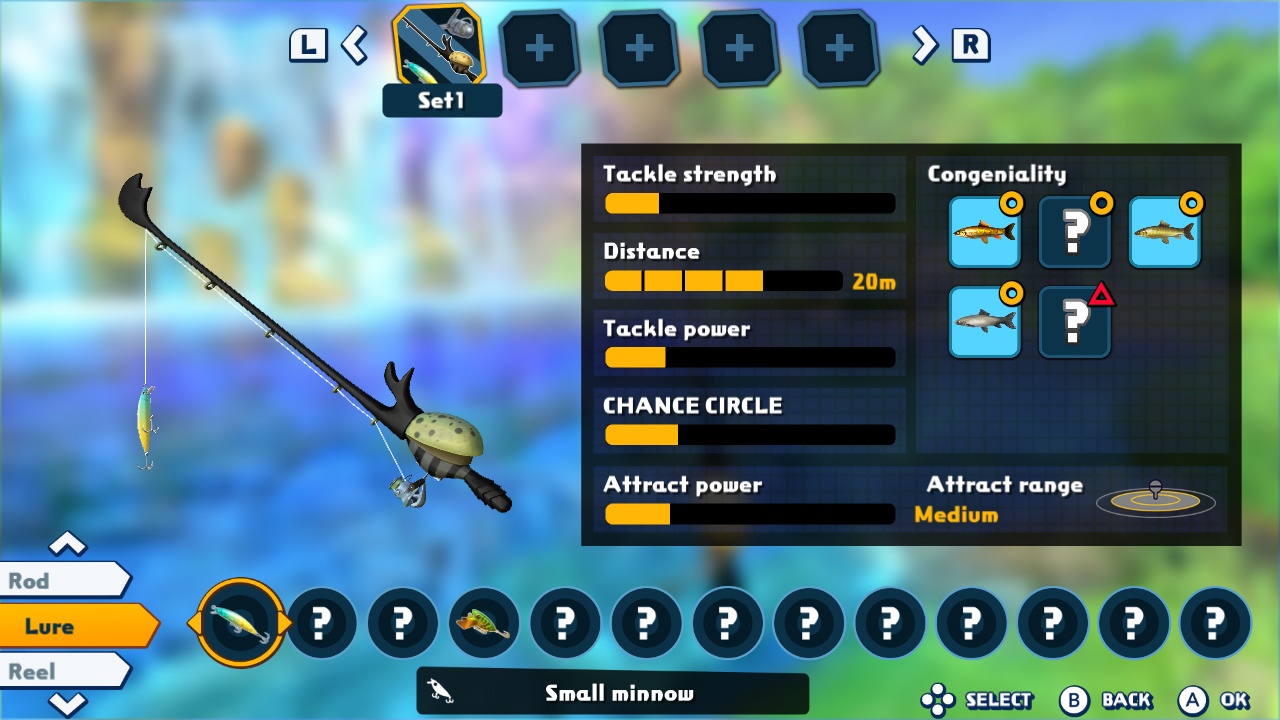 The mechanics of the game are where you’re going to make or break your interest, and I must say that WFS did a bang up job of making motion controls a thing for this game. While you can use a standard button configuration (probably ideal for the train and playing on the sofa), you can use one JoyCon as a reel, the other as the rod, and you can even decide if you’re a left or right-handed fisherman, which was a huge relief for this Southpaw. As you set up in every area, you get a chance to calibrate the “up” position of your rod, which is an unbelievably essential movement to make. Not just at the start of the spot, but inbetween nearly every cast as you move forward. Catching a fish involves a whole lot of attention to detail in terms of the different factors and processes. You gotta keep the rod head angled towards the fish to reduce the increase in tension, as well as knowing when to pause reeling for a second, lest the line get cut and you lose the fish. You need to make sure you don’t stop too long, or the tension will be so slack the fish swims away. Then there are magical elements, when you’ve gotten the fish in a tired enough spot to do a circular “rod hit” where you can close the distance between you and the fish quickly if your reflexes are good. You can align your rod with a ghostly outline to dramatically reduce your tension and make for a quick reel session to finish the job. And then there’s the moment when you get the fish into the catch zone and quickly yank him back up and into your boat (or net, maybe, it’s not clear). You got the damn fish. Nice job.

But now your calibration is all shot to hell because you’ve been waving your arms around like crazy, so you gotta re-center, otherwise up is down and east is blue. Plus there’s the general oddity of how fast the fishing can move. Anyone who’s ever been fishing will tell you that the longest part is the wait and the shortest is usually reeling the fish in. Here, it’s totally opposite, as you usually get a hit within seconds of casting (and, if not, you can just “cancel” your cast with the B button, which is an amazingly unfair advantage over the fish). Once you get it on the line, it’s hard to say how long it’ll take, but I will say that the larger fish in later areas will give you a good, GOOD fight. Be sure to conserve your reeling strength during these moments: it might feel like you need to twist your arm off to bring the fish home, but light, circular movements will usually get the same torque without tiring you out. You need the fish to collapse first, not your carpal tunnel to flare up. 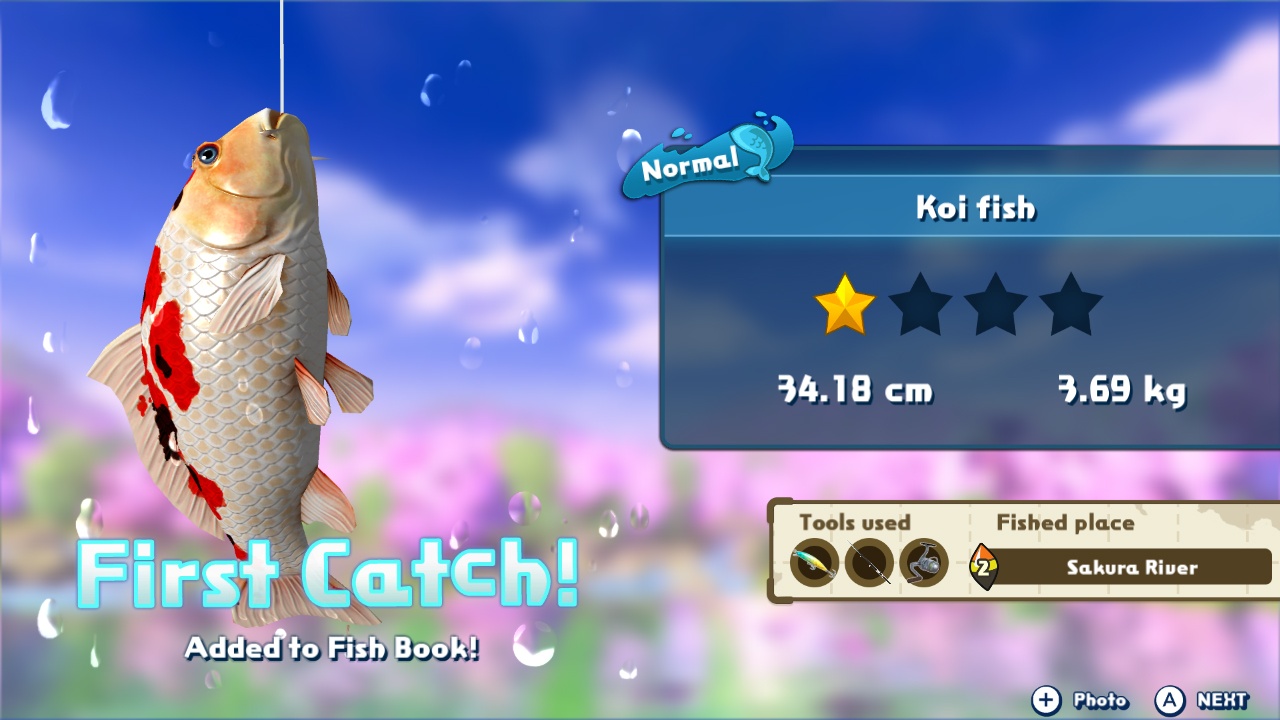 The rate of progression of Fishing Star World Tour is a bit all over the place. In order to move on, you gotta make sure you get those mission target fish, otherwise you’re going NOWHERE. There was one pond where I sat for like an extra twenty minutes, trying to find a single fish that would close my loop and get me off to the next world. This means that I would be at 100% once I got that fish, but 100% is rarely needed to get to the next spot, just getting what you’re told to get, otherwise you’ll be scooping koi out of the same locations all day long. Getting the mission fish then enables you to get more lures and rods, but you sometimes feel stagnant in what you get. The first few rods are only slight variants, and you need to get a decent collection before you see a large jump in quality from the original to the current. Although I do suppose that’s true of most fishing equipment: you’re not playing Dynamite Fishing, this is real fishing, so there’s no explosive option to suddenly catch all the fish at once.

There’s also an entire separate mini game built-in for folks who’ve purchased the fishing kit with the Labo, and, sadly, I wasn’t able to give it a try. However, I wanted to mention it because I like the fact that a development team made a point to incorporate a bit of that into their main game. There’s more than enough for standard players to get satisfaction and their money’s worth out of the game without some cardboard (and there’s probably plans online to just make your own, probably), but it was really cool to add a bit extra for the crafty players who are also probably fishers. Hell, I’d wager that anyone who has the Labo but doesn’t really go fishing will still dust it off to give this a whirl in order to experience what looks like digital ice fishing.

Issues with controls aside, I seriously enjoyed Fishing Star World Tour. It got me out of my normal comfort zone, reminded me that I liked fishing, and was involving without being too time consuming. The locations were varied, beautiful and quaint, and there were a ton of fish to find all over the world. I did enjoy setting some “favorite” gear setups so that I could easily switch between grabbing the distant jumpers and trolling for smaller fish that might be nearby. If you enjoy fishing and want to have a good motion controlled experience, this is a great game to reel in.

A damn fine fishing game that does a great job of balancing the joys of the catch while taking out the agony of sitting in a boat for eight hours.