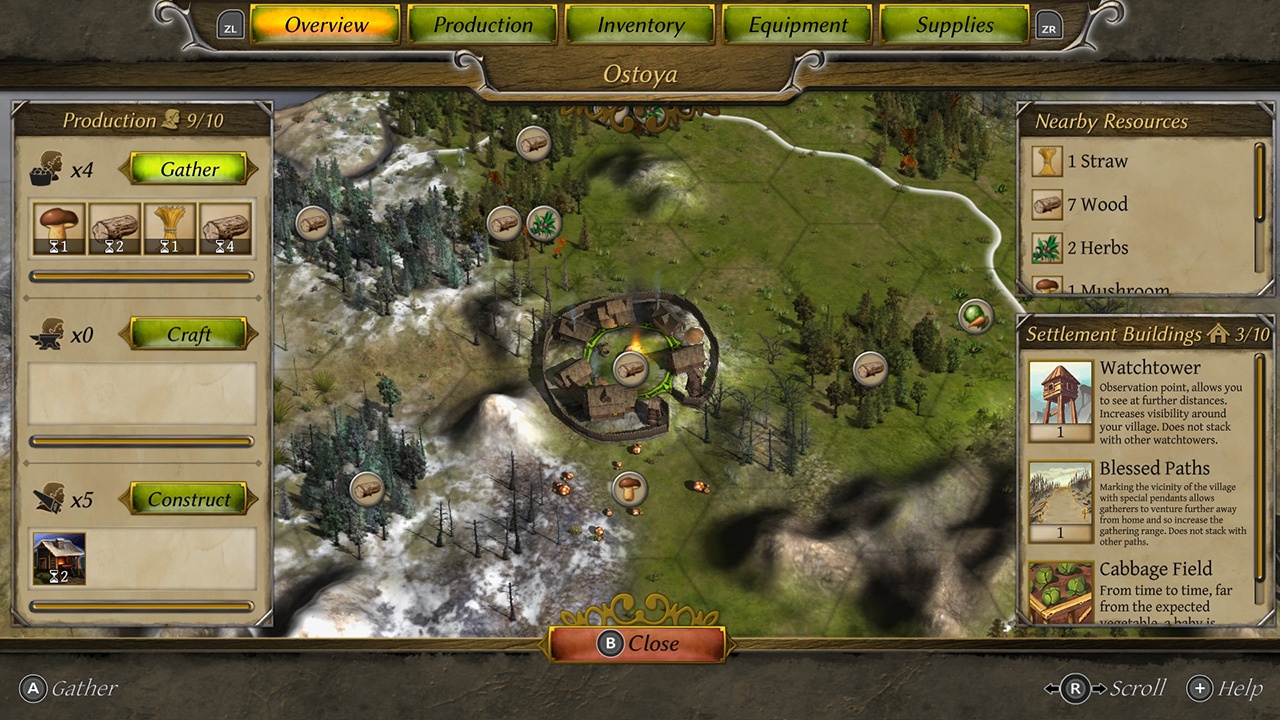 Every now and then, a new game comes along that tries to shake things up or produce a new formula for us lucky gamers to enjoy. However, it can sometimes be risky trying to be fresh or innovative, as the game can go either one of two ways. They can become an overnight or astounding success, or they can simply fall by the wayside in a forgettable mess. One of the latest titles to see a release on the Nintendo Switch, Thea: The Awakening, is one such game trying to produce a new take on things, taking snippets from a variety of genres to produce its own distinctive style.

Developed by MuHa Games, with publishing through Monster Couch, Thea: The Awakening takes a variety of elements, such as turn-based strategy, card-based battling and a Civilization-style aesthetic to produce a role-playing and survivalist game that contains more than a sprinkling of table-top adventuring and role-playing. The premise of the game revolves around the land of Thea and its consumption by the forces of darkness. After years of no light, the sun has risen again, bringing with it a future of hope. However, once the sun sets, the dark evil still dances under the shadows of the moonlight. As one of eight deities, your task is to rid the land of its dark curse and bring prosperity again to Thea’s people.

Although a god, your powers are weak and generally ineffective during these dark times. In order to fulfil your quest, you possess your being through the eyes of the people as you help them to survive against the odds, explore the regions of the land and battle the dark forces. The first thing that you’ll notice upon loading the game, is that this is a title that is based on choices. Although there are eight gods to choose from, only two of them are playable at first. However, each of the gods possess different abilities and buffs; each one distinct enough to offer a different playthrough for each one chosen. 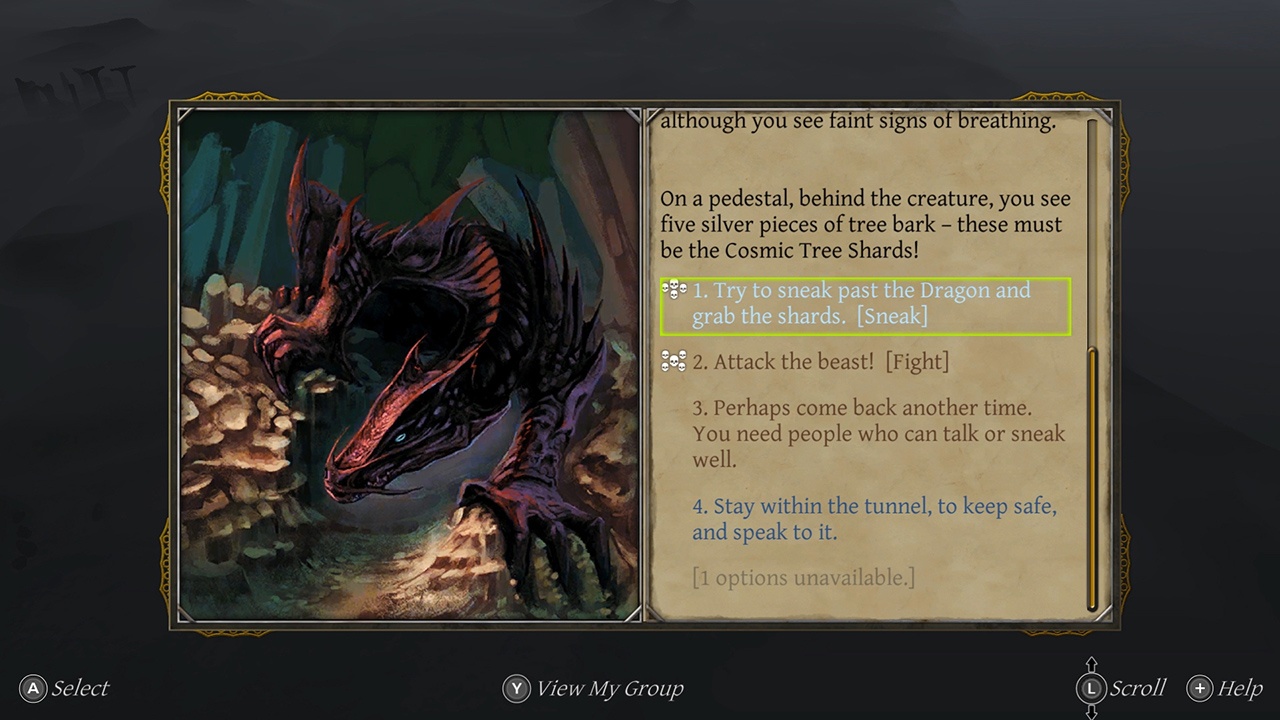 You begin the game by taking control of a small village and its inhabitants. Again, you are presented with a choice here of how the villagers live their daily lives; either as warriors, herdsmen or craftsmen. Whatever path you choose, each are equally important as it’s here where the survival aspect of the gameplay comes through. Warriors are adept at fighting, yet need herdsmen to collect food and materials for the craftsmen to produce better goods, such as buildings to develop your village or apparel to make you stronger. It’s down to your decision-making that plots the course for the game; creating a substantial amount of depth, as well as a micro-management system to start producing results.

It’s a very clever premise that works well for the most part, but only if you can get to grips with the mechanics of how each of the elements work. In simple terms, you need to create parties of villagers and set them on different tasks to gather resources, craft items and explore the regions. It’s only when you start to learn these techniques that the game open up to reveal its role-playing and card-battling elements. Much like the Cvivliaztion games, the land is obscured by cloud cover and through moving your party of explorers across the land, do you reveal a variety of locations and story triggers. As you search each locale, a narrator describes the events that unfold, usually culminating in a fight or two.

Combat is determined through turn-based card battles; each of them based on a series of numerical values, such as attack, defence and health. The gameplay here runs in a similar fashion to other card-based games; although it does contain some complications that make these parts of the game more a battle against the mechanics, rather than wits. However, you do get the option to auto-determine these sections, although by doing so, you do miss out on a lot of what the game has to offer. In fact, in terms of all of the game’s various elements and mechanics of playstyles, each one contains a level of complexity that takes time to learn, as well as a lot of reading in order to fully understand how each section works. 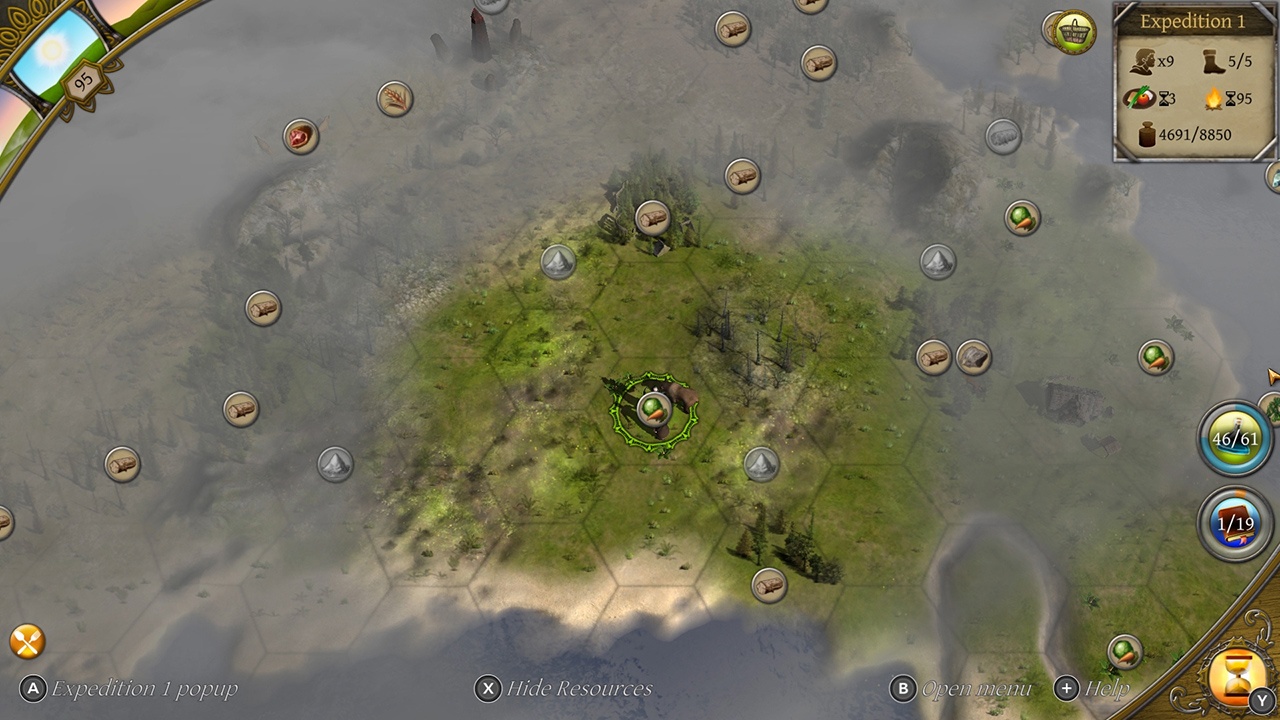 It could be said that this brings with it an insurmountable level of depth and in some ways it does. However, it also requires a good deal of commitment to fully understand everything it is trying to do. Admittedly, once you do begin to get to grips with the game, it does become a compelling and addictive experience, but at the same time, after all of your efforts, you soon begin to realise that the nature of the game revolves around a very repetitive structure that soon becomes tiresome; making the whole experience one that isn’t really worth all of your efforts. Narratives become repeated, as do the events that follow. The constant need to harvest and craft becomes laborious and the card-battling system just simply becomes overwhelming.

It’s a shame really, as the presentation of the game, both aesthetically and in its audio quality really shine. But it just ends up being a game that is trying to do too much, asks too much of you and ultimately, doesn’t do the things it is trying to do, very well. The biggest element of fun comes from the exploration of the land and the story that unfolds in a quest-master style of play. But in order to get the most out of these elements, you have to go through all the other, rather lacklustre elements to get there; making this journey more of trudge than an exhilarating experience. It’s got some promise and some genuinely exciting moments, but the overall execution of its parts soon creates a tiresome game.

Overall, Thea: The Awakening is a game that contains some interesting elements, but ultimately becomes a game that tries to do too much. All of its separate game styles are too overly-complicated to encourage investment and its constant repetition soon becomes a grind. It’s not necessarily a bad game, in fact, in some aspects of its gameplay, it is a thrilling affair but for the amount of work it asks you put into it, it simply doesn’t offer enough of a reward to make it justified. If you’re willing to put in the time and effort to learn all of its mechanics meticulously, then you might just find this a journey worth taking, but I fear that for the majority, this is a game that will become tiresome before you find its awakening.

A game that asks too much of you and doesn’t offer enough reward for your commitment; making it difficult to find an awakening here.