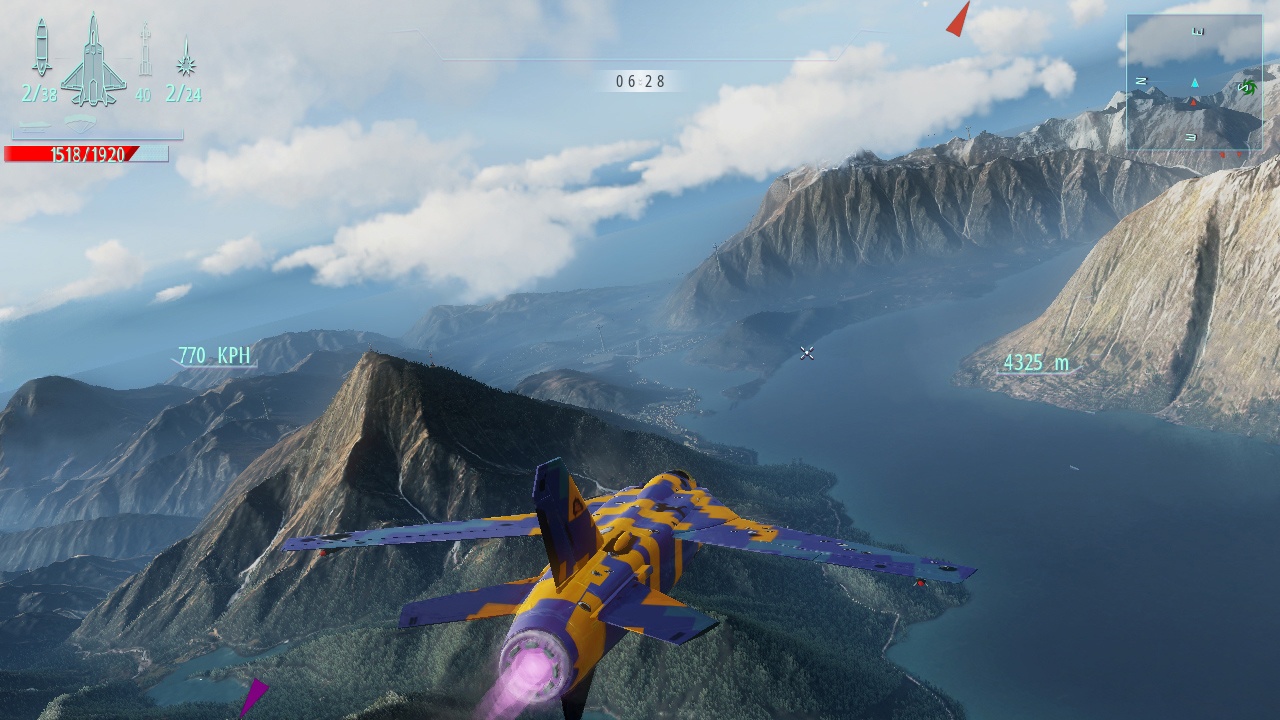 I’ve always held an interest in flight simulation/dogfighting games; it’s been something that’s always stayed with me since my Commodore Amiga days. Much like any genre of gaming, you get your good titles and you get your bad, but no matter what their worth, they always provide me with some form of excitement. However, it’s always a genre of gaming that can be pretty light on the ground within the vast expanses of console libraries; especially on the Nintendo Switch; and most definitely in terms of flying modern fighter jets. It’s an issue that’s about to be addressed though, with the release of Sky Gamblers: Afterburner upon Nintendo’s hybrid machine.

The title comes hot on the heels of Atypical Games’ previous flight-simulated release, Sky Gamblers: Storm Raiders; except this time around we get to wear the flight suit of a top gun pilot within the cockpit of a jet fighter. Much like the previous title, this game also comes with a wealth of options and play modes; as well as the ability to take to the skies in online multiplayer match-ups. In fact, in terms of presentation values, this game runs along pretty much the same mechanic, although its flight model is significantly different with an emphasis on smoothness and speed. However, not all is as it seems and I’ll get to that later, but first let me just run you through the basic premise of the game.

The time-line for Afterburner takes place in the near-future, with a campaign mode that sees you chasing a renegade general who has turned his guns on your alliance. The plot and themes of the story are rather clichéd and there’s nothing here too unique or particularly outstanding. It follows a run-of-the-mill path, although it does involve you in a series of sorties that take place in a variety of real-world locations. However, the main attraction of these games is usually the jet fighters and the flying mechanics that go with them. It has to be said that there is nice variety of aircraft on offer here; some of which are unlocked at first and others which you must purchase through monetary rewards from successful sorties. 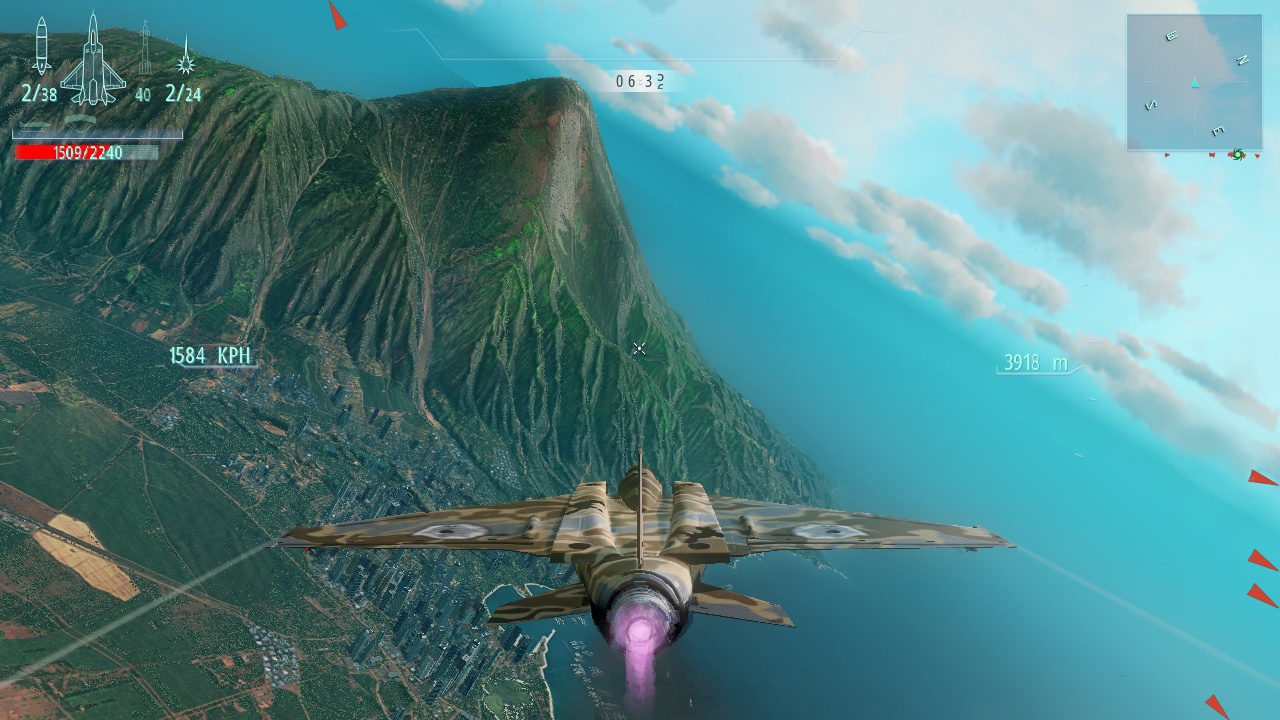 Although the game does contain a good number of fighter jets, none of them possess real-world names; although their basic modelling do represent familiar aircraft. The mechanics of flying are also nicely done here, with a simple control scheme that uses both thumb-sticks and makes good use of button layouts. For the most part, you do get a good sensation of speed and the general dogfighting and flying mechanics are silky-smooth. The sceneries too, are nicely implemented with detailed horizons and realistic looking locations; at least from a distance they do. However, it should also be mentioned that I did experience the odd frame-rate stutter, although it was never anything major or particularly game-breaking.

The campaign runs over fifteen levels, with each one roughly lasting around ten-to-fifteen minutes each. Each of them are nicely presented with radio chatter and narrated cut scenes to push the story along. There’s also some nice little features here too, with good wingman elements and a variety of land-sea and air based targets. Much like the first title within the series, the emphasis here lies solely on an arcade experience; although you can tailor-make a control scheme to produce different style of flying mechanics. Multi-firing missiles and auto-replenishing flares are the call of the day; giving less urgency when compared to a more realistic simulation.

As well as the story mode, the game also caters for a varying style of play, with more arcade-styled game modes that also carry over to an online multiplayer. These games contain objectives such as Team Deathmatch, Free-for alls and King of the Hills; whatever the mode, I’m sure they’re all familiar to most of us. These can all be played against varying degrees of AI enemies; as well teaming up against randoms, although at the time of writing, I was unable to find any occupied lobbies to try out this component of the game. Completing missions and partaking in game modes, rewards you with XP and monetary values that help to level you up and purchase upgrades and new aircraft. 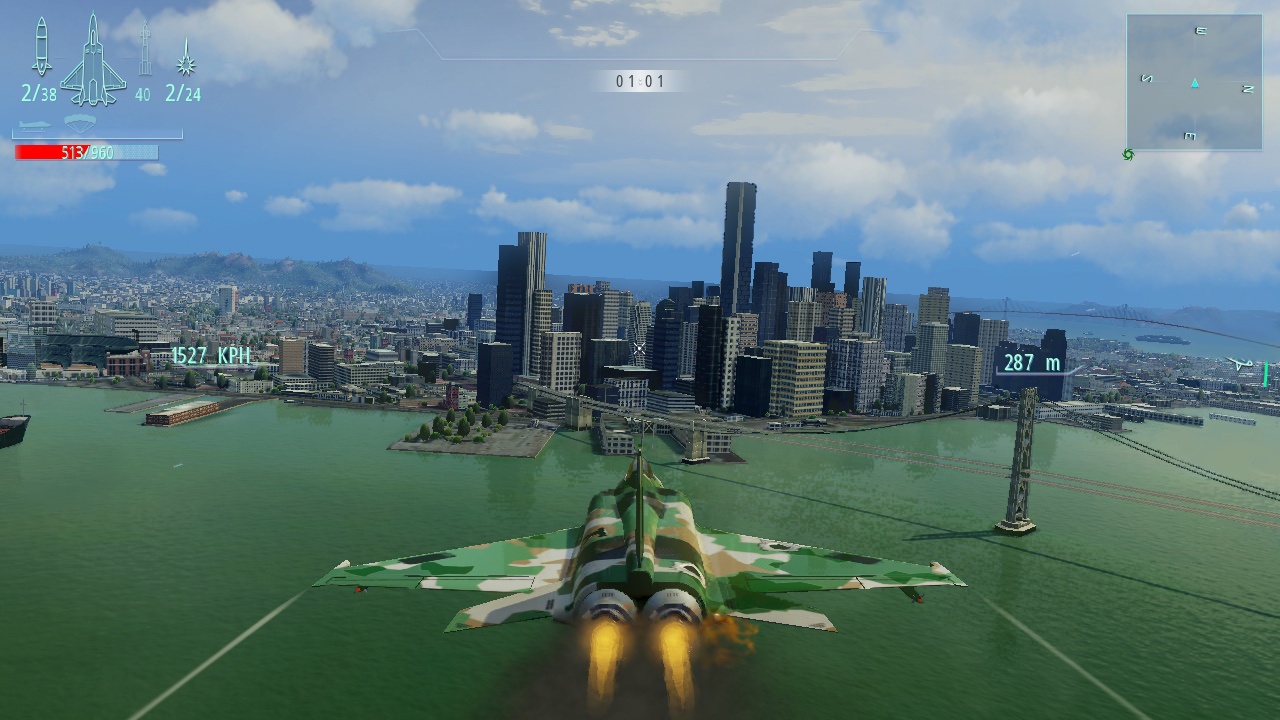 I can’t say that I noticed any discernible difference between each style of aircraft in terms of handling; although the cockpit models were the same throughout. It does add a touch of disappointment, but again, it wasn’t anything that took away from the gameplay itself. However, the HUD displays some good information that is easy to read; as well as provide information of certain key bindings for quick referencing. There’s also a good deal of personalisation options too, with the ability to choose your own load-outs and specific paint-jobs and decals too; a particularly useful tool for showing off your designs and flying skills when the online component of the game becomes fully functional.

Despite containing a good amount of options, game modes and personalisations, the main function of any good flight simulator comes down the gameplay element. Although its control scheme and flight mechanics are generally sound, smooth and responsive, the actual levels of gameplay never feels particularly exciting or urgent in their execution. Much like the story, the flying and combat contain a very run-of-the-mill feel to them; creating a game that soon becomes a bit stale as it simply runs through the motions. A few technical errors also bug the mechanics of the game; although, hopefully, these will be patched in a future update. Completed story-mode missions weren’t ticked-off as completed, gained XP and levelling weren’t saved or carried over to my next game and at times, my guns simply wouldn’t register a hit.

Overall, Sky Gamblers: Afterburner does offer a solution to that itch of wanting a good jet-fighter simulation game; albeit one that runs down the arcade path. It’s control schemes are responsive and the flying is super-smooth; producing a good sense of speed and manoeuvring. Although its story is nothing to write home about, it does entertain, but only in a casual capacity; the same can also be applied to all of its game modes. In reality, it offers a nice distraction from time-to-time, but for a more long-haul flight, soon becomes a flight-simulator that feels distinctly grounded. Add this to a few technical errors that can hamper your progress or enjoyability with this game, then you simply end up with a title that has the potential to be good, but in its current standing, rarely flies above that standing.

Despite containing smooth controls and flying mechanics, too many technical errors make this nothing more than a gamble.