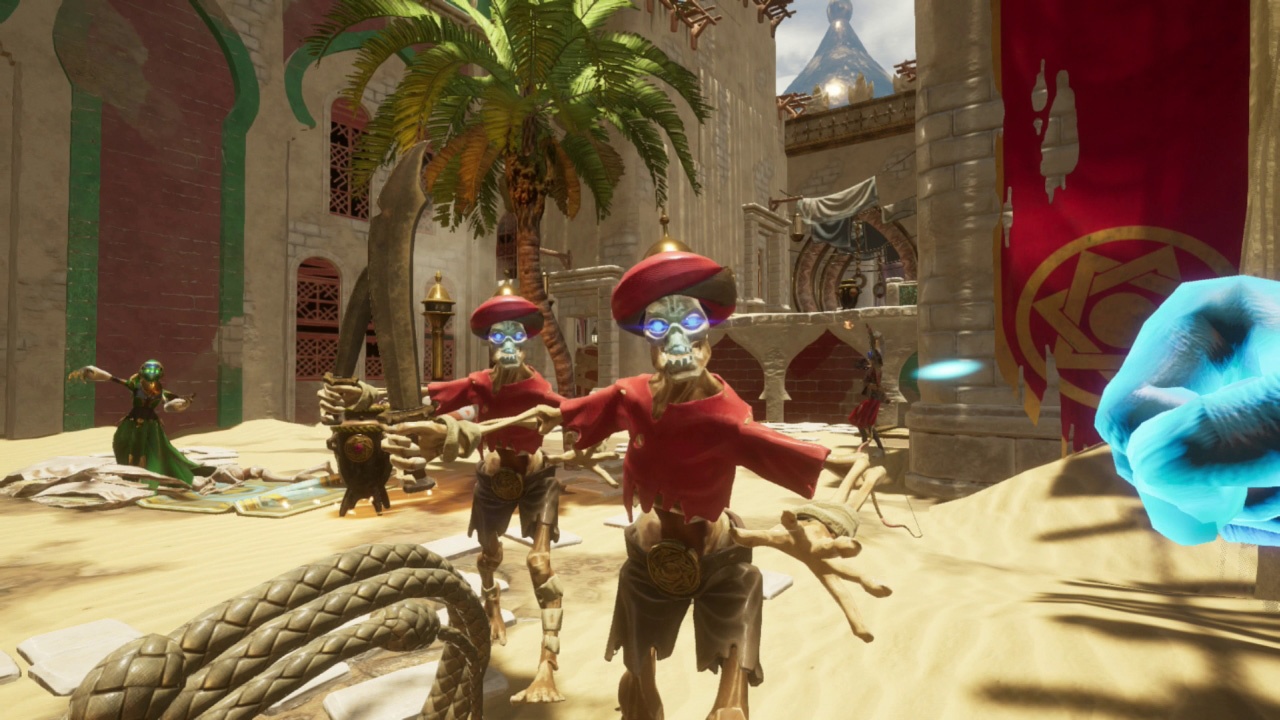 The current rogue-like renaissance has put out some fantastic titles over the last few years, but it’s had its fair share of duds too. City of Brass sits somewhere in the middle, because while it’s a sometimes enjoyable hack n slasher, it’s also a frustrating and mostly forgettable experience that you’ll wish could live up to its premise.

Initially, City of Brass is refreshing; the first person take on the die-repeat genre within the Arabian Nights inspired setting is exciting, interesting and visually satisfying. Working through a series of procedurally generated environments, you’re tasked with finding the exit of each area before the hourglass hits zero. On the way, you face both enemies and traps which all culminate to cause some seriously tense moments, especially if you find yourself lost as the clock nears its endgame. Each character always dual wields a sword and whip and the latter can be used to grab items from afar and trigger traps, as well as acting as a long-range weapon. While you spend a hefty amount of time avoiding traps, you can also use them to your advantage and its enormous fun leading a horde of the undead into a spike pit.

Along the way you can collect gold which can be used to upgrade yourself and your weapons; but it’s not as simple as just clicking to upgrade. You have to find genies which are planted throughout maps who act as shops to help you buff out your character. Most genies offer upgrades to weapons and armour, but the most useful genies allow for buffs such as disabling certain traps or summoning a companion to help you fight. 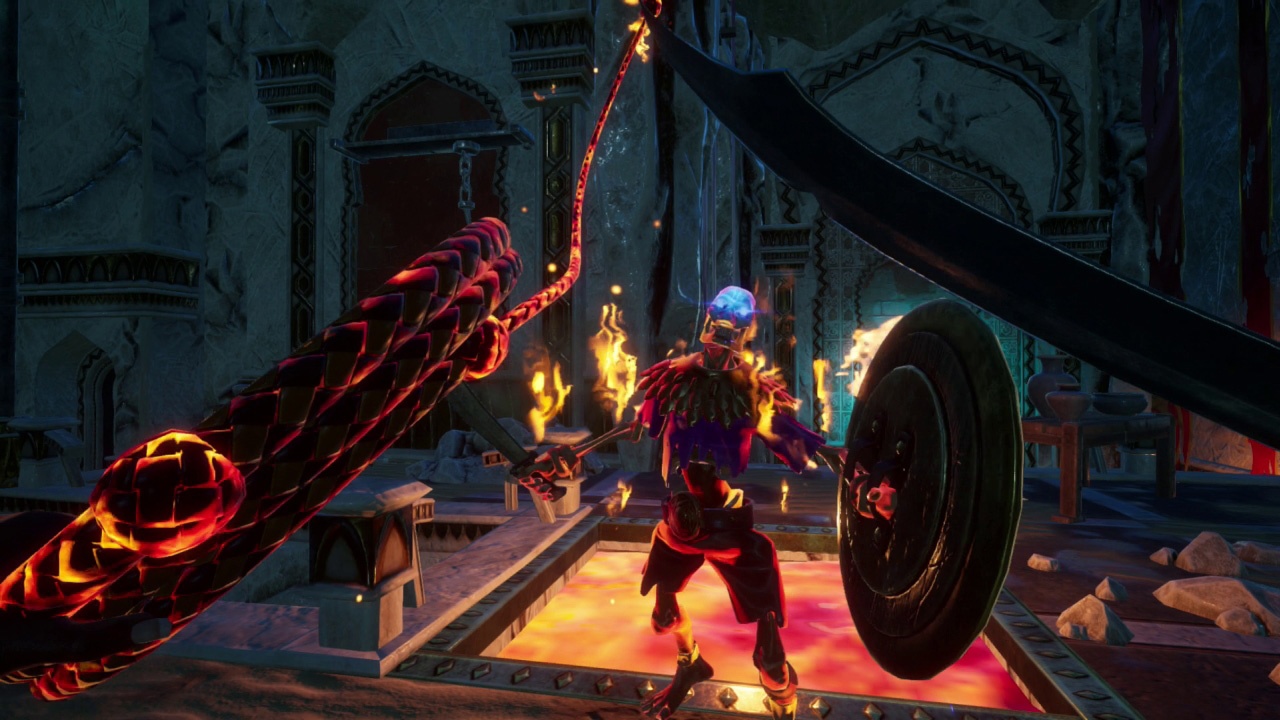 While these progression-based genies are useful, you’ll ultimately be most grateful for the few genies that allow you to heal because, oddly, this is the only way to get extra health throughout the game, including between levels. This wouldn’t be that much of an issue if the game seemed anywhere near fair, but the mixture of tough as nails bad guys and inefficient, clunky and sometimes unresponsive controls make the game painfully difficult. On multiple occasions I’ve found my sword pointing wildly into the air while I’m being pulverized by a legless demon, because the controls are so inefficient.

The same pain goes for turning and aiming with your whip. Its hard to make accurate shots due to the teeny hit spots, and despite headshots being a useful way of temporarily stunning bad guys, it’s almost impossible to successfully conduct, unless the enemy is already face to face with you and by this point stunning your foes is too little, too late. General handling of your character isn’t much better either and its all just a really floaty experience.

All of this frustration wouldn’t be much of an issue if the game didn’t incorporate rogue-like values, meaning once you’re dead, you’re dead, so any progress made is lost and you’re back to the start. Obviously, this is the quirk of the genre, but unlike games like Dead Cells that reward death with small permanent buffs, City of Brass puts you on an almost permanent reset. You do level up which reaps rewards (like unlocking new characters and weapons) but the desire to repeat is low and replay value is sparse. 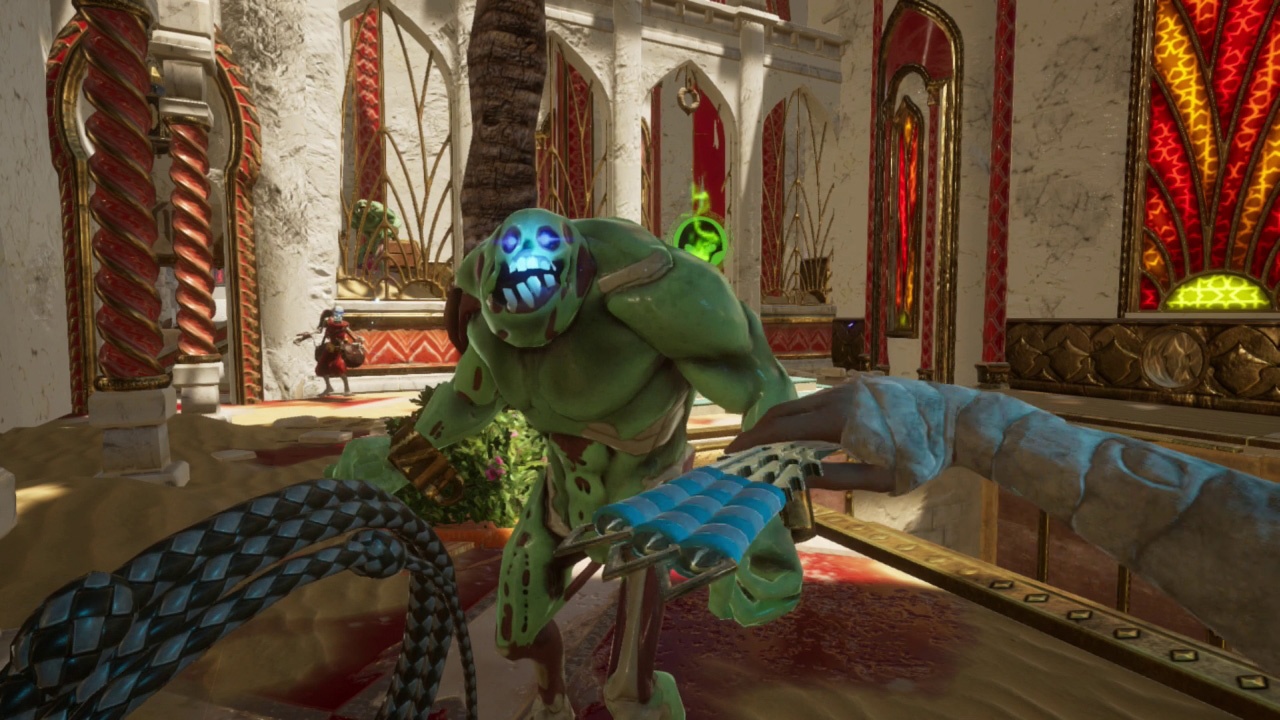 If you’re a glutton for punishment you can make the game infinitely harder by equipping enemy buffs that can do anything from give enemies extra health or increase spawn rates. On the flipside of this, players can equip their own buffs (or blessings as they’re called) which make the game infinitely easier, like equipping you with more health or decreasing enemy and trap spawns. On the surface, this sounds like an easy way to solve the difficulty issues but equipping these disables leader boards and it kind of feels like you’re entering a cheat mode which frankly cheapens the experience.

There’s an old school Doom vibe to the bad guys, from skeletal foot soldiers and archers to flying, explosive skulls and fire wielding genies. There’s some commendable variation between character and traps design and even though environments can be a bit samey, even late game, the package has made a decent jump to the Switch in both handheld and docked modes.

If you’re having rogue-like fatigue, it’s hard to recommend City of Brass, especially if you already own better games in the genre. While the setting is refreshing and the enemies are varied and interesting, the cumbersome controls and uneven difficulty take the fun out of this Arabian adventure.

The rogue-like renaissance has put out some fantastic titles, but it’s had its fair share of duds too. City of Brass sits somewhere in the middle.