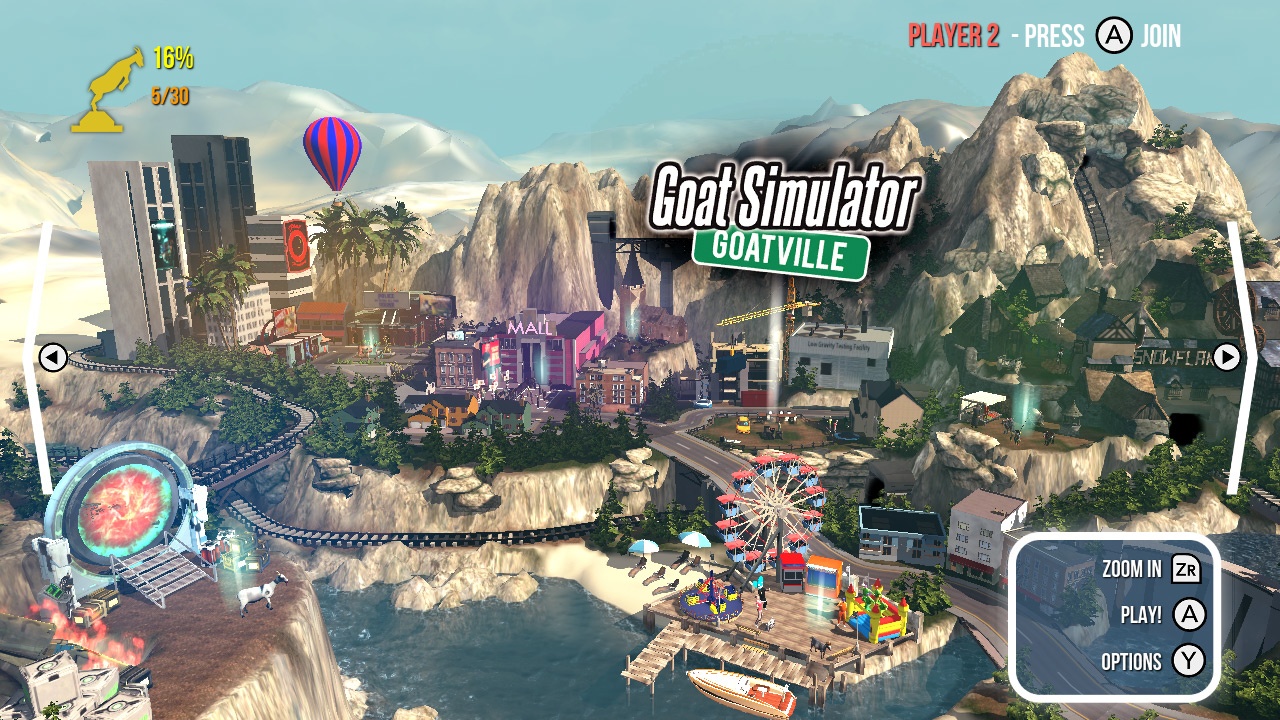 There are days where I feel like the Internet has too much power to make things happen ironically. As disappointed as I am that Sweet Victory was not played in full during the Super Bowl (it really shouldn’t have been teased at all if the NFL wasn’t going to go for it), I’m secretly relieved. Give a mob an inch, and they’ll take a mile. I don’t actually think Shaggy will end up as a playable character in Mortal Kombat 11, but the fact that there’s even a petition for it scares the hell out of me. Then again, had the Internet not been so widely accepting of buggy, hilarious and somewhat pointless games, Coffee Stain Studios may have never found success with its wonderfully bizarre title, Goat Simulator, which had a lot of fame thanks to streamers and gif sharing. Now, five years later, the game has developed into something truly unique, and the Nintendo Switch is now home to Goat Simulator: The GOATY.

For those unaware, the original Goat Simulator (which is still present in the GOATY edition) put you in the hooves of a goat who is just wandering around, indestructible and aimlessly. The game got a ton of acclaim for being intentionally broken in terms of a physics engine, as well as letting players be amazingly creative with how this goat would explore a town and nearby city. The primary objective USED to be to explore, find funny and strange Easter eggs and generally have a good time. Since then, the core game has expanded significantly, now including things like achievements, objectives, and, most importantly, Mutators. The Mutators allow your goat to change their action and appearance in some way, from either exuding a smelly fart cloud that knocks out people around it to a literal jetpack that you can barely control. You can stack some mutators as well, making you a giant flying zombie goat in a world that doesn’t deserve your wrath. But the mutators aren’t all available from the beginning: you gotta unlock them through exploration and trial and error (or looking up the locations online, but that would be cheating).

If you were only here for vanilla Goat Simulator and had never played before, you wouldn’t be in a bad spot with just the primary game and the pierside carnival that acts as a bit of an expanded map/DLC. The game is still as fun as I remember it, with explosions, incredulous reactions to actions (I licked 35 cars!) and seeing how far you can push the idea of “this goat can’t die or be hurt, let’s go nuts.” Even having played the game on multiple platforms previously (PC, XBox 360, iPad), it was still genuinely some stupid, silly fun to dive into the ocean and watch my crazy goat carcass flop around in the waves until I found the underground sewer where certain beings may or may not live. Coffee Stain Studios has done a bang up job of optimizing the game to run well on the Switch without removing all of the glitches that make the game worth playing. Accidentally teleporting through a glass door without breaking it, or getting a whole car stuck to my head? Awesome, keep it going. Massive slowdown when I try to apply a couple of mutators? Not cool, and, thankfully, not present in this version of the game. Sure, it took them a few years, but it really is the best version of the vanilla game so far. 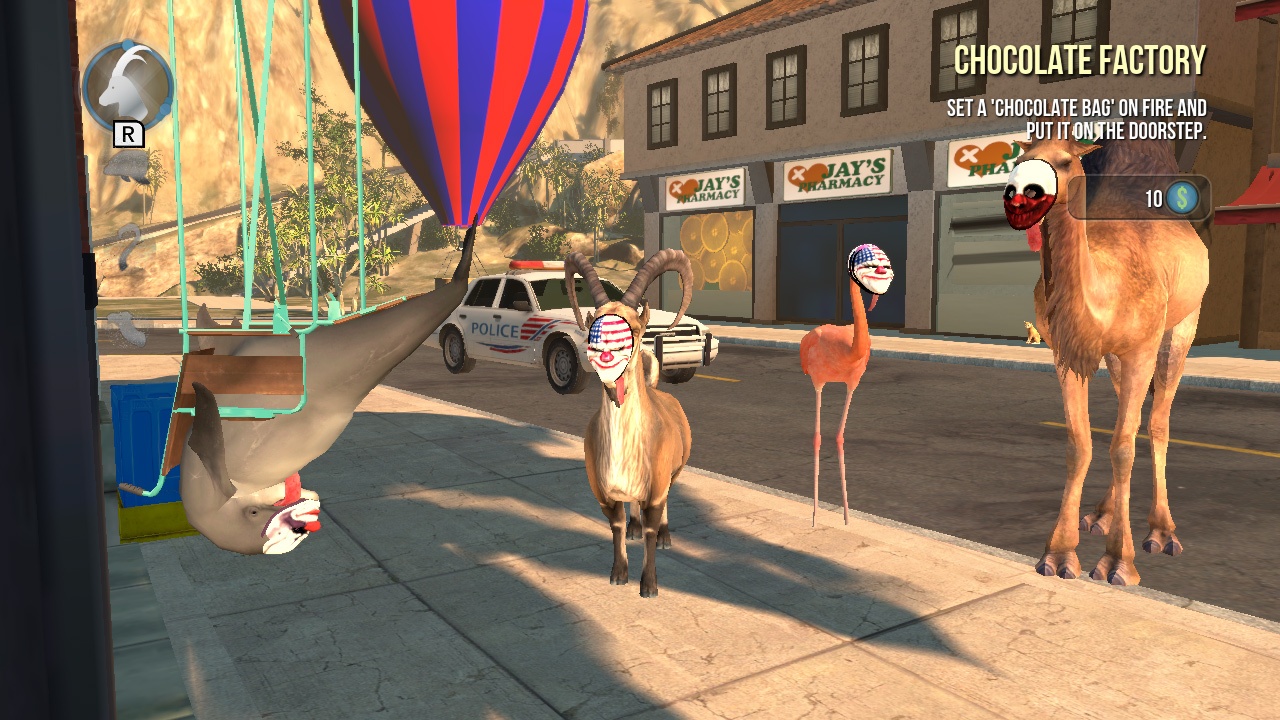 This is one of those rare times when this extra edition is well worth the price, because of how much the game has expanded as a result. Most of the time, GOTY or Season Passes include some content that’s really cool and important, sometimes some stuff that’s just cosmetic, but all need you to care about the main game in order to make the most out of it. Could you imagine entering Minerva’s Den without having to trudge through Bioshock 2 first? You’d never know how good it was compared to how bad other things were. The GOATY, however, is packed full of DLC that lampoons and pastiches existing games and game genres and all act totally independent of the main game. The MMO, for example, is a great showing of how something as weird as Goat Simulator can work in an online sense, granting classes and quests to the otherwise pointless endeavors of the goats. It’s a surprisingly robust world, and there’s actually still people online who play it as such, albeit far less than when the DLC first dropped. Hell, I logged in and was promptly getting my butt griefed by some goat with a fishing rod who proceeded to drag me along most of the map before dropping me in the ocean. Fun? Debatable, but certainly entertaining.

The Zombie mod is also one of the most flushed out ideas I’ve seen in terms of adding zombies to any game. Remember when zombies were everywhere, in everything, and then we got goddamn sick of them? Well, they’re still here in Goat Simulator, if you want them, and there’s actually a great implementation of how to go about it. Either you’re a goat trying to survive the apocalypse, or you’re a zombie goat trying to cause the apocalypse. This could be one of those instances where it depends on your gaming background, but I love playing both sides of the coin, and the small world of Goat Simulator is the perfect microcosm to see what happens when you’re the survivor or the plague. Plus the physics of it all makes for some great moments, like springing off a zombie’s head and inexplicably launching yourself somewhere around three miles away. Hey, how did YOU survive the apocalypse?

After that, the other DLCS (which are arguably newer and more specific) are middling but still worth a play. Waste of Space pokes fun at both space colonization games and microtransactions in the realm of referencing Kickstarter and failed crowdfunding applications. You need to destroy things and basically appease the “backers” in order to unlock more of the game, which was less than fulfilling to me. It ultimately leads to Goats in Space, which was definitely entertaining, but it just felt like I had to do a lot of things that I’d already done to death in the other games, but now I was being told that I had to do it. Running around headbutting people because it’s violent fun is one thing, but doing it because I wasn’t able to even open a door unless I did it first is another. There’s probably a way to skip right ahead, but I didn’t bother searching the Web to find out. Oh, and this also felt like the most unoptimized area of the game, probably due to how things need to be gradually toggled on through accomplishments. As a result, space goat or not, I’m not coming back anytime soon. 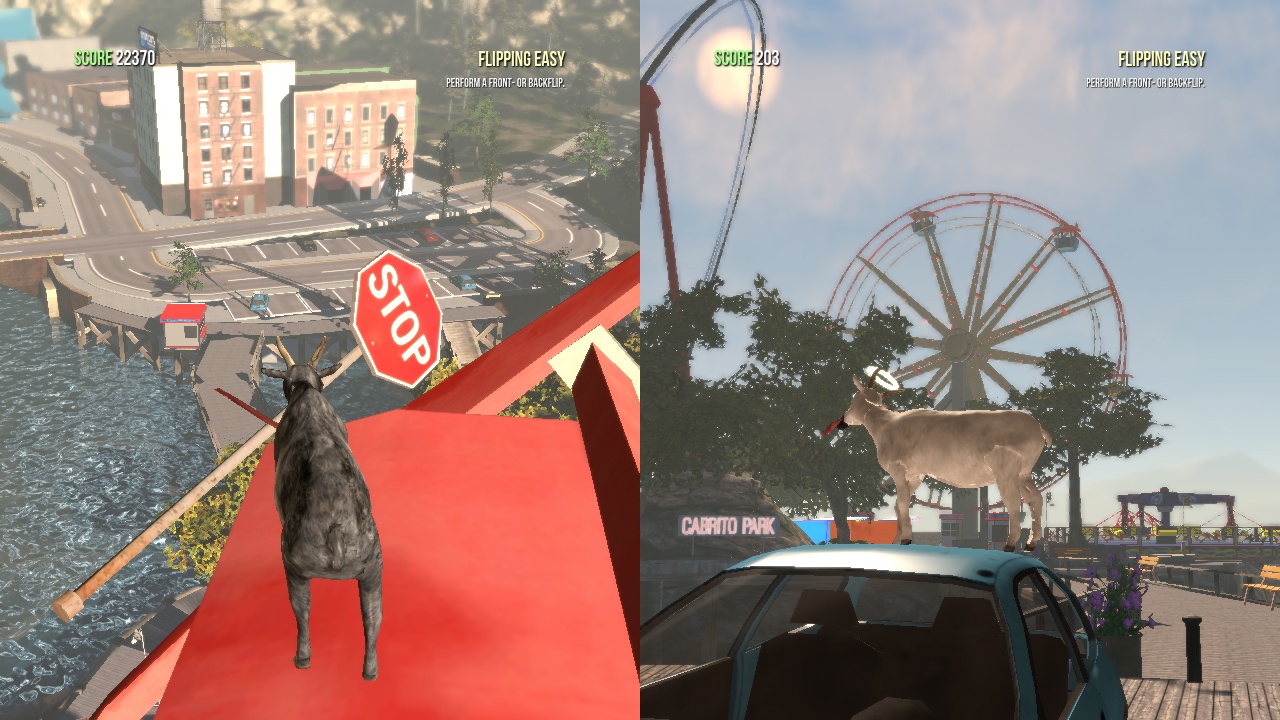 Lastly, there’s this Payday DLC that is a serious collaboration with Overkill Software, and it’s one of those odd experiences that I don’t think anyone would believe could happen several years ago. You play a crew of four zoo animals (goat, flamingo, camel and manatee in a wheelchair) who all work together to rob a bank. In theory. In practice, this is a hellish kind of situation where you’re operating the whole heist as a one person operation, and everything can go very wrong, very quickly, because it’s impossible to fully coordinate everyone and everything in the time that you have with the controls that you have. Now, to be fair, this is still in line with Goat Simulator’s mission statement: you’re mostly invincible, everything is broken in terms of physics, and the objective is mostly incidental in terms of how you play. But, given that certain game modes have two players, you’d think this one would have it so that you could coordinate shenanigans with friends more succinctly.

The long and the short of it all is that Goat Simulator: The GOATY is the product of a joke from a few years back that’s spun wildly, successfully out of control, and we’re all better for it. The game has a lot of awareness, heart, fun and exploration, and, as much as I dislike the Payday DLC, it’s probably the biggest of all the maps and has hours upon hours of stuff to do. While the pricetag may seem steep, this is essentially five games combined into one with the added benefit of being set up well for the Switch and lacking in additional DLC to purchase in the future. It’s insane, it can be annoying, but it’s a great time, and one of those games that you want to introduce to people for the first time over and over. Wait for a sale if you must pinch pennies, but this goat’s worth every damn cent.

While the pricetag may seem steep, this is essentially five games combined into one with the added benefit of being set up well for the Switch and lacking in additional DLC to purchase in the future.