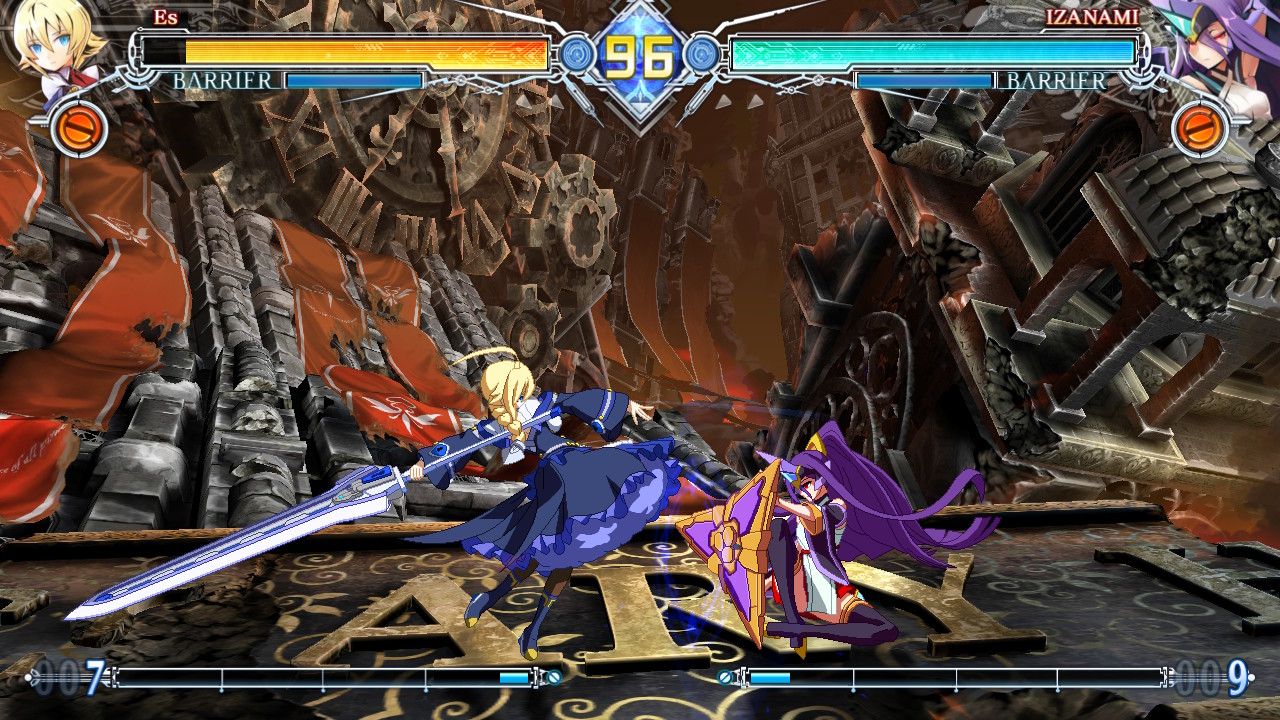 When I was young, I was invited to join a group of friends to play Dungeons and Dragons. I was super excited, but, sadly, had soccer practice until the middle of winter. When the season concluded, I asked if I could still join. The DM said yes, but warned me they were right in the middle of a huge campaign, and that they’d try to fill me in on the details but couldn’t promise everything. I agreed, and what happened next was several weeks of fun and utter confusion, as we’d stumble upon NPCs, locations and brassed off gods that I had no clue as to their purpose or existence, and people saying “Oh, right, there was this thing…” It was still massive fun, but I don’t know for certain, even as we concluded the quest weeks later, if I fully understood everything the way the other members of my party did. That is the best possible way I can equate my experience with BlazBlue: Central Fiction Special Edition. Beautiful, entertaining, and completely lost on me.

Arc System Works has been in charge of the main games of the BlazBlue universe, as well as the side titles, and I’d like to think I’ve gleaned a bit of the information through the process of playing them and watching others play them as well. I know that the main dude is Ragna, and he’s infinitely powerful and hellbent on revenge for the death of his family. There’s this whole thing with the powers of the world, and some kind of infinite loop on the creation myth, and a cat who’s also an assassin, and it could honestly take pages upon pages to explain the plot as it is. There isn’t anything clean and tidy about “a tournament of fighters” or all the other wondrous plots that made up fighting games back in the 90s. This thing has a massive, overarching plotline that’s packed to the brim with characters, settings, plot twists, alternate universes and the horrifying prospect that Central Fiction is only the end of Ragna’s tale. There will be future BlazBlue titles, under a different protagonist, and that might be enough to frighten me off from future installations. 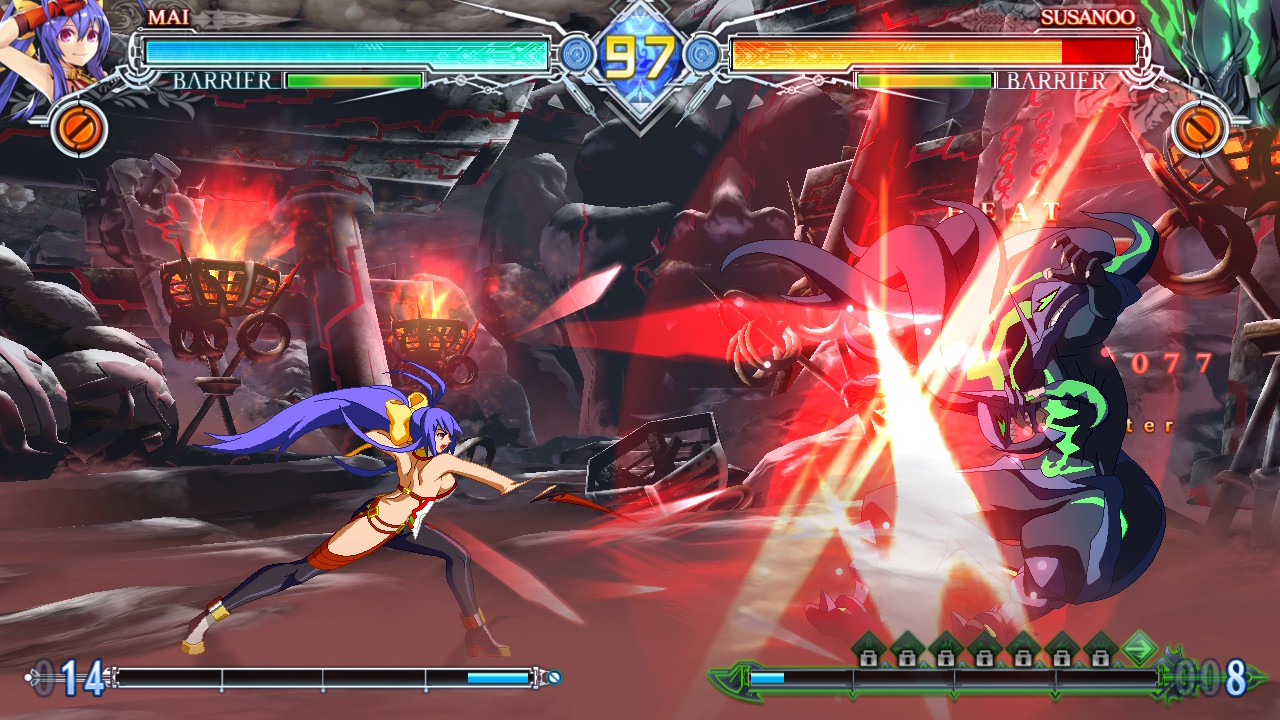 Nodding to the plot, this might be one of the few games where “Story Mode” is very honest with what it’s attempting to present. Far from something where you have the same key elements copy and pasted into all the fighter’s runs, BlazBlue: Central Fiction does something truly remarkable by essentially marrying a visual novel to a fighting game. Sure, you can do the “arcade” mode, wherein a very thin version of the plot intermingles between all the fighting, but Story Mode has a complete setup, full voicing, and, I’m not exaggerating, about 10 minutes of just reading and listening and meeting/remeeting characters before a single fight takes place. There’s even an option at the beginning to get a catchup on what happened in the previous games (Calamity Trigger, Continuum Shift and Chrono Phantasma) if you really are fresh-faced to the scene and need all the events laid out for you. This was fascinating to me, and I sort of wish I had taken more time with the story mode. It totally draws you in, describing all the inner conflicts and public battles that happen in the lives and worlds of the characters, and then breaks things up by letting you get your butt handed to you by the AI. Hell, if you missed something, there’s a Library that you can explore in the main menu that will be the official encyclopedia of BlazBlue should you need to know more about anything.

If we divided BlazBlue into two separate yet equally important parts, the story mode (and the story therein) are the sides to the main dish. You can enjoy the story, and you may even fill up on it completely if you’re totally engrossed. But the fighting is where the real magic happens. BlazBlue: Central Fiction Special Edition is the culmination of all the experiments that Arc System Works has been doing with the series over the years and bringing it together into a final, blazing format that is incredibly intimidating to newcomers and so satisfying to long time players. This is a fighting game that’s held to a standard similar to chess: you can probably get through a match just blindly guessing what you’re doing, but understanding the moves and the probability of it all makes for better results. There’s OverDrive and Heat, two different gauges that allow you to eventually execute Exceed Accel, which could result in the ultimate of finishing moves (provided that your opponent isn’t tactful in Guard Crushes). There’s a whole thing with Active Flow, that makes you more powerful but also only works once per round and can easily end with you having wasted your single opportunity if the other player is keen to be on top of you in a hot second. There are strong, medium and weak attacks, combos, ranged and close damage, no finishing moves but every possibility that you’ll get caught in a riptide of pain that makes you wish they’d just pull out your spine already. Like Guilty Gear, the name of the game in BlazBlue is to find out who you gel with best and get really, really good with them, because others have been doing the same. 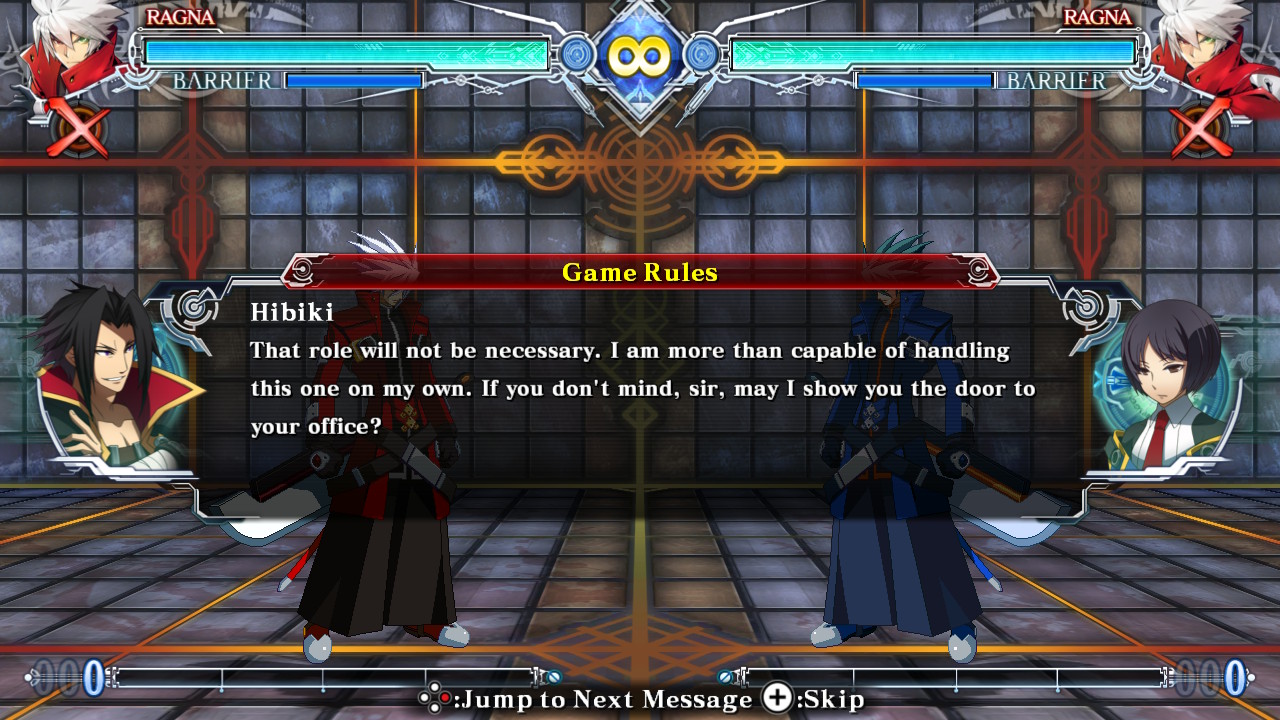 The Special Edition of Central Fiction has all the DLC characters that’ve been released to date, bringing the roster to an astonishing 36 fighters of all shapes and sizes. And I’m not exaggerating: if you can imagine it, there’s probably representation here. Men, women, children, evil spirits, robots, puppeteers, chick with a giant sword, magical girl who clearly got lost from another game…all this and more. The game is so colorful and filled with oddball entities who are 100% serious about their role in the BlazBlue universe that it’s insane to think this isn’t a crossover game with another series. And, as a special edition on the Nintendo Switch, it runs…well. That’s all I can really say is well. The online matchmaking was decent with actually finding a couple of rounds for me to get murdered in, and there was no discernable drop in framerate on local fights (I often attribute online lag to my own connection as not to malign the game itself). The biggest difficulties I can see Central Fiction overcoming on the Switch is the install size and the price. At a whopping 12 GB, Central Fiction is going toe-to-toe with Smash Bros in terms of occupying memory, and I have to stop and just be astonished that Nintendo still hasn’t added USB HDD support. Seriously, this isn’t a fighting game that I’d want to play on the go: I’d want the big screen and a proper controller. Why can’t I offload it to something that’s much bigger, with more read/write allowances, and not risk borking my poor, abused 200GB MicroSD?

Lastly, yes, BlazBlue: Central Fiction Special Edition is a bit pricey. It’s the cost of a premium game. But I would absolutely argue that this IS a premium game. Arc System Works put a ton of time and effort into getting this title to the Switch, and it’s poised as something that will take months, not weeks, to lose steam over or stop enjoying wholeheartedly. As such a competent fighting game with a big roster and a crazed storyline, plus a pretty damn loyal following (it’s still dubbed in Japanese, please understand), I think that Central Fiction will do just fine on the Switch, and fans of the more intense fighting games will bode well as we head towards a brighter, more fight-filled year with Nintendo. Just be sure to never slow down, as the wheel of fate is turning and even more is around the corner.

Truly a strange but wonderful experience, I don’t think I’ve ever played a fighting game where I needed to read this much in my life.