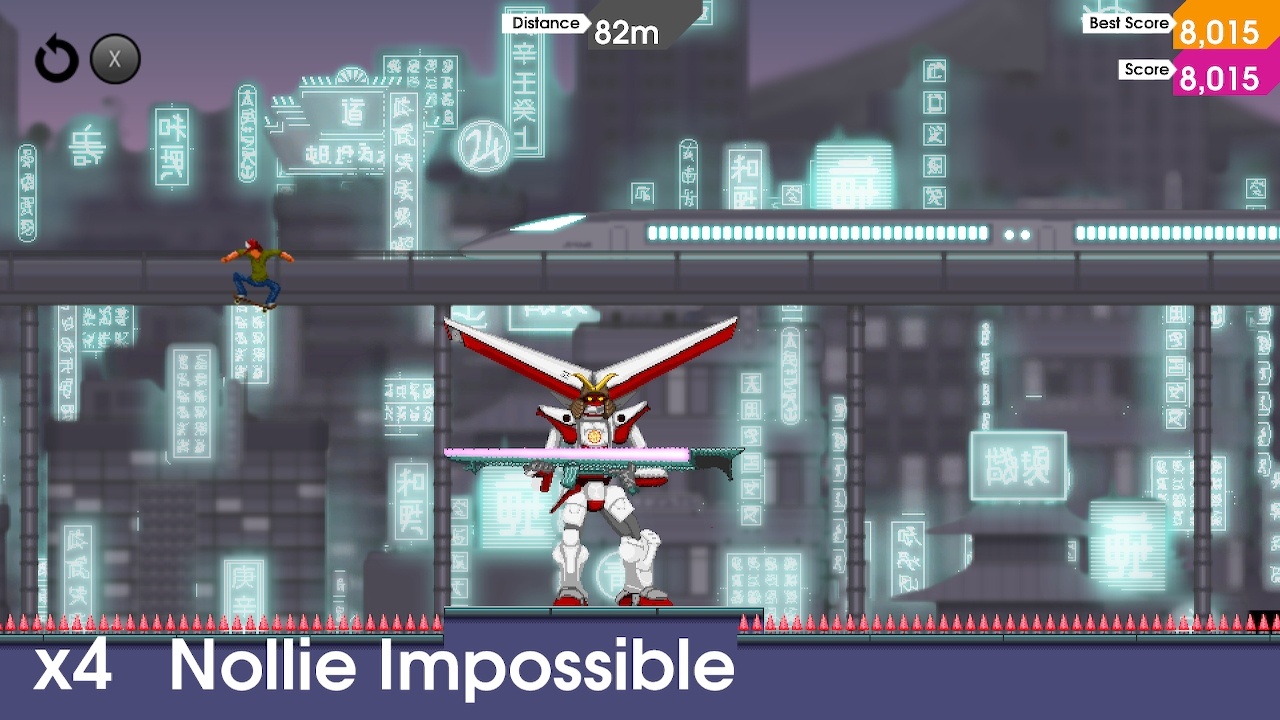 Ever seen someone (usually a middle schooler) who was really, really good at spinning pens? They just sit there, twirling the pen between their fingers like they’re damn magicians and you’re enchanted by it even though there’s no applicable skill set that this can lend for the future. You’re just totally on board for the few seconds that this BiC wizard is doing their thing. Then you get over it and move on with your day, but there’s a small part of you that wishes they could accomplish that level of expertise on something that impresses two people: yourself and whoever is watching. That’s the kind of enjoyment and crazy level of intensity that I get whenever I step on board OlliOlli: Switch Stance. And I think you might find the same kind of fruitless but fufilling level of excitement when you jump on board.

OlliOlli and it’s sequel, OlliOlli2: Welcome to OlliWood, are a set of fantastic skateboarding puzzle games that ask you only one thing: be as sick as possible on a deck in a short course time. Unlike the great Tony Hawk experiences of days gone by, OlliOlli is all about 2D and very, very timed, paced out reactions. Whereas with an extreme sports game that you might have played on a console, OlliOlli wants you to do awesome tricks and survive. Each stage that you encounter is a carefully mapped out series of flat areas, rails, edges, stairs and, on occasion, totally unskatable areas that will instantly turn you floppy and ruin your run. You get exactly zero chances to get back up and try again, instead needing to learn that failure means starting from the beginning and running all those perfect landings and nosegrinds from the top. It’s a harsh lesson, but one that you need to understand.

Switch Stance divides the games into two separate entities, which I found a little odd as it disallows swapping between titles easily. You gotta force quit and start from the beginning if you want to bounce around, and, to be honest, OlliOlli2 loads a bit slower than the original. In fact, it just feels like the second game runs worse on the Switch in comparison to the first, but that’s understandable when you look at the improvements that happened between the two games. The original OlliOlli is more high density pixel graphics, whereas the sequel is a smoother, more cartoonish sort of animation that looks pretty dope as you surf through the different levels and stages that make up OlliWood. This also means that the levels themselves look better. Whereas the first game has some pretty rough looking snowmen, dump trucks and graffiti all around (it’s charming but arguably low fidelity), the landscape of OlliOlli2 really pops, especially with the Carnival of Dead area that reminds me of a Sonic the Hedgehog layout. Additionally, there are some extra goodies that we’ll get into in a moment. 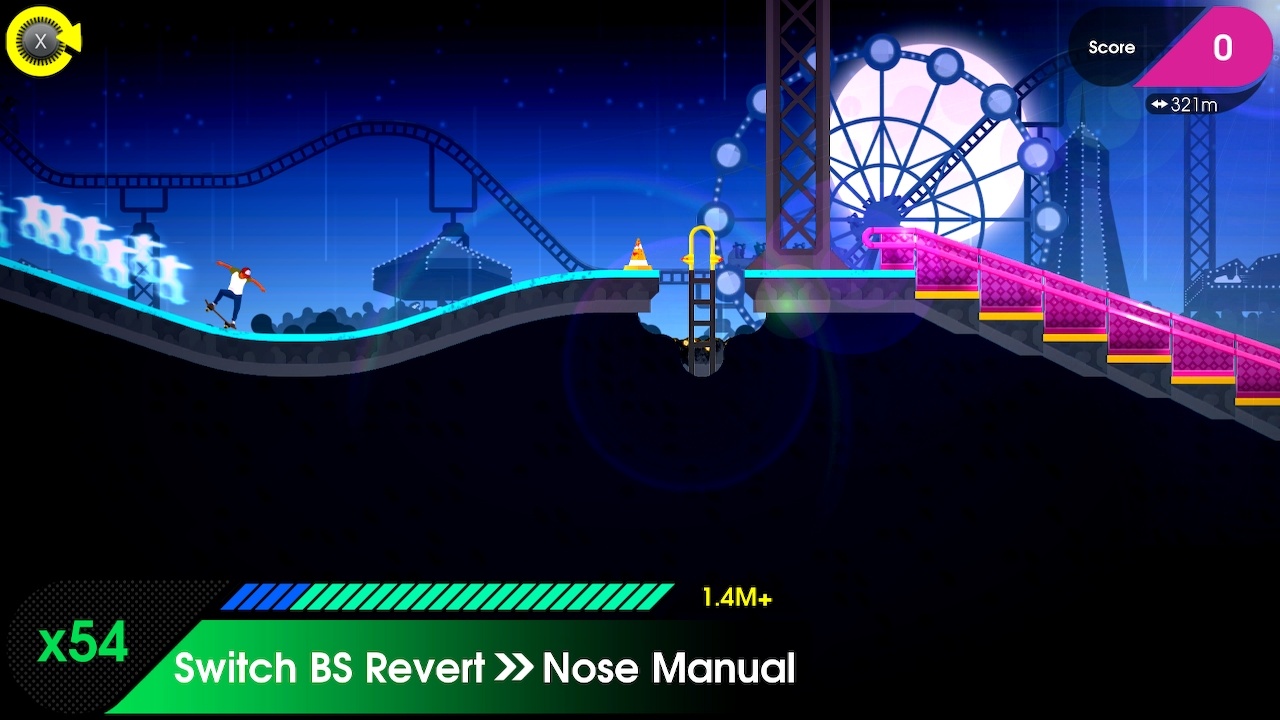 When it comes to just enjoyment of the core gameplay, nothing beats the first OlliOlli. The levels progress so naturally in difficulty, starting out with you being absolutely cocky with how high a score you can get and ending with positively choking on your own rage at hitting a dump truck wrong. Everything flows and feels so natural in terms of the buttons and the mechanics converting to motion. You keep it going with B, jump off with a random direction and turn of the joystick, land pointing one way or another to simulate a slide (use a shoulder button to variant your move even more) and time your landing right with a B press to get the steadiest stick. The better the landing, the higher your score, the better your momentum. There’s nothing worse than being sloppy two landings in a row and then running out of steam while grinding a railing and failing for flunking physics. You have a set of missions for each level that come down to doing tricks, not sucking and getting a high score, and achieving all of these means unlocking a pro version of the stage. On the Pro, you get substantially higher mission targets, and you do your best, and you fail time after time until you get it right. It’s both cathartic and infuriating in the same moment and it’s positively wonderful. OlliOlli is the culmination of what an indie title strives to be: memorable, exciting, enjoyable and insatiable.

OlliOlli2, on the other hand, seems to have taken a bit of a wrong turn in trying to evolve itself, and maybe that’s why there isn’t an OlliOlli3 at the current time. Sure, the core mission statement is there, but it feels like it was trying to scratch too many itches at once. For example, with OlliOlli, you can just start the game and immediately start failing at life. The game asks if you want a tutorial, and you can say no, and then you feel the consequences. If you’ve never played before. Obviously, if this isn’t your first rodeo, then you can skip the annoying training wheels and just get on with it. OlliOlli2 takes no chances and makes you relearn your steps all over, even though nothing has fundamentally changed from the original. Then, once you get going, you realize that there’s a bit of a timing tweak, and now the window to land a perfect landing has shortened from the first game. Getting squarely on your board and scoring higher than “sick” requires tighter reflexes, meaning that this game is simultaneously more attuned to longtime players and more adamant on getting new players up to speed. As someone who is inbetween – familiar with the game but not stringent enough to have unlocked all the Pro levels in the first game – it leaves me in a strange position of now feeling more mediocre than before. 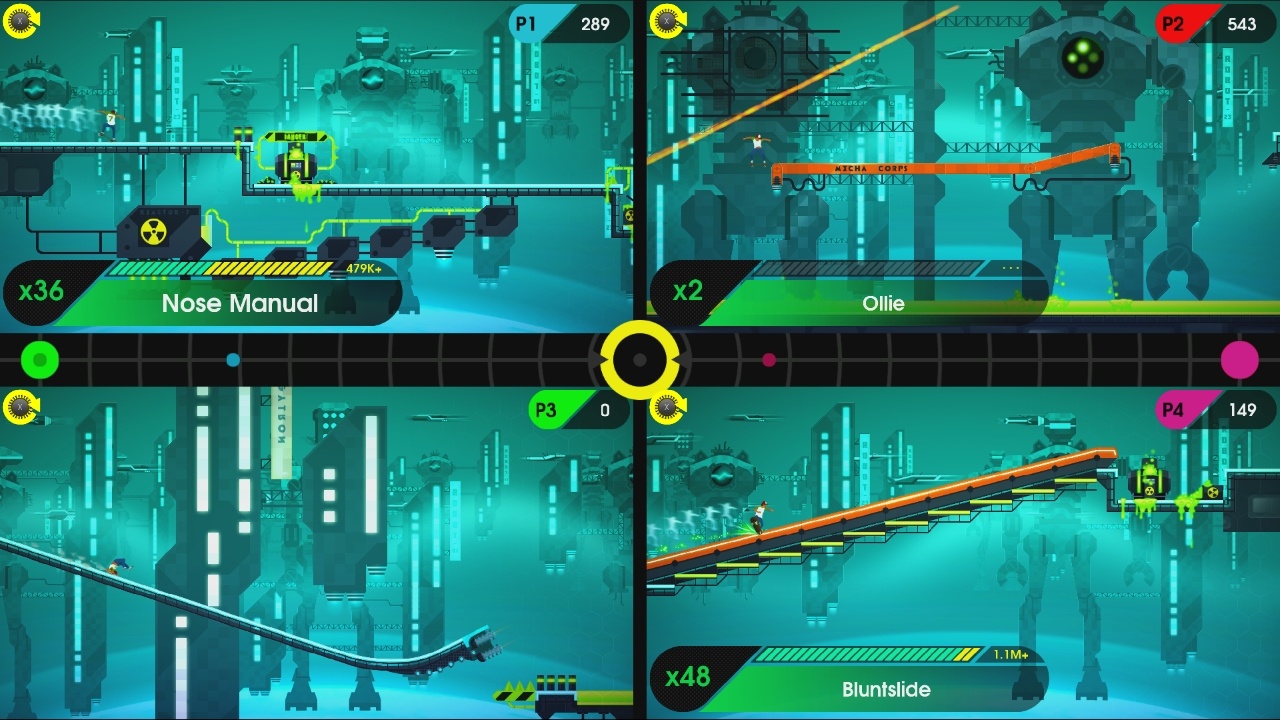 However, OlliOlli2 does make up for it with some additional content. The first game has the career mode, a daily run and that’s IT. Simple at best. OlliOlli2, on the other hand, has a Pro circuit where you get one chance to do one trick for maximum points, which is the best kind of pissing contest, especially with all the leaderboards (both online and offline) that exist. There is a Skatepark Mode to allow for more freeform practice and fun, though I argue it still doesn’t work as well as the 3D skate games do it. The best part, for me, is the multiplayer, where you can go against three other friends in a 4 way split screen. This CAN be done on the Switch, but I highly recommend docking and using the television in order to do it. Additionally, unless you are super dexterous and comfortable with the L/R buttons on a single JoyCon, carry around additional controllers. The level of complaining I heard from people trying to do backside noseslides on a half controller was comparable to what I heard when I made friends play Smash with one JoyCon. If you don’t like it, bring your own controller next time, MIKE.

The great part, though, is that Roll7 isn’t making players decide one or the other. For Switch players who either loved these games in the past or never experienced them, OlliOlli: Switch Stance is the best of both worlds with a good separation between them. As always, my only complaint is the constant nag to connect to the internet for leaderboards, but it makes sense due to the importance of registering high scores. For Nintendo fans who played the original on the WiiU/3DS, this is a great chance to play the sequel with all the extras and still enjoy the first without needing to carry around their 3DS anymore. And, seriously, it’s a great price for all the content within. Highly recommended to anyone cheering on the Nindy machine.

A fantastic puzzle game that incorporates the flair and excitement of skateboarding with some serious, tight-as-a-drum coordination.