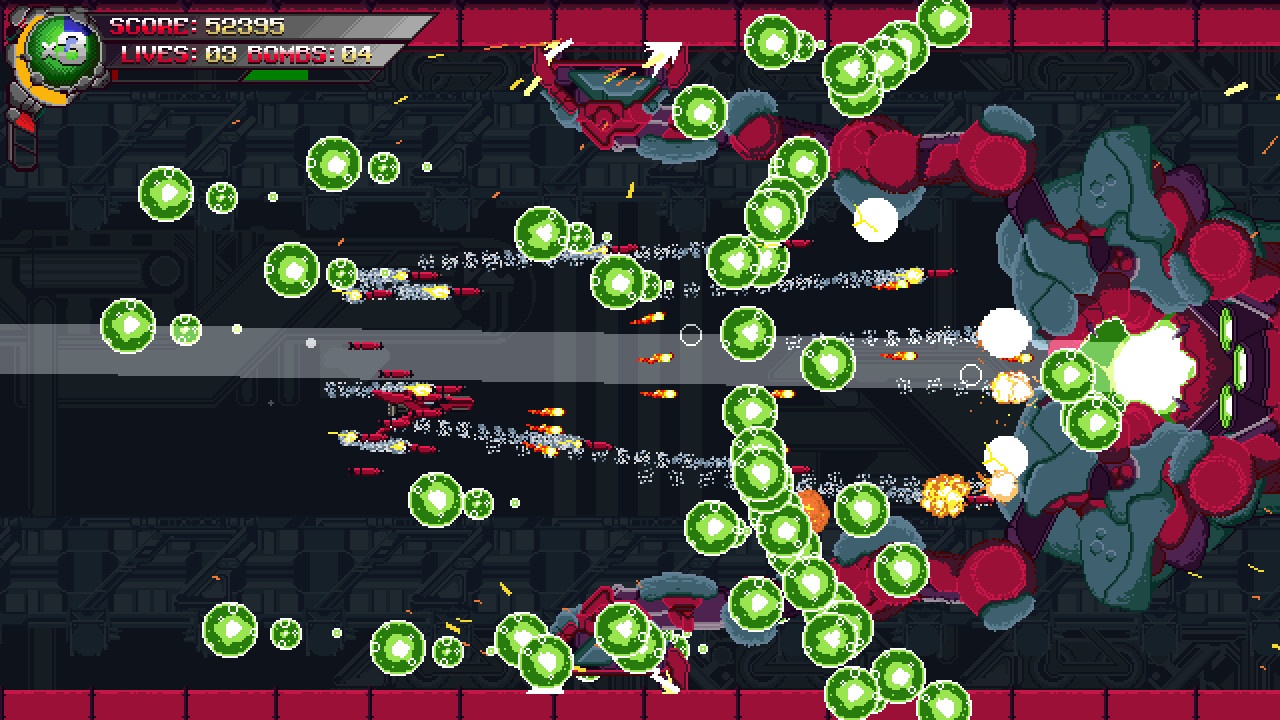 Usually, when people think retro, they tend to think of the 8-bit and 16-bit eras. Take a look on the Nintendo eShop, and you’ll find an abundance of new games that look like they were created on the NES or Mega Drive. What about the 32 bit era though? Too ugly? Well, for the most part, I totally agree – the majority of 32 bit games were foggy, muddy and largely unpleasant from a purely aesthetic perspective. They may have been cutting edge in the mid-90s, but unlike their 8 and 16 bit brethren, their unsophisticated 3D visuals have aged like a warm glass of milk. What about the Saturn though? Yes, 3D games were even uglier on the Saturn, but if you were lucky enough to have owned a Japanese Saturn (worth a purchase even to this day), you’ll know that it was home to some of the best looking 2D games ever made. It might have been sold as a 3D console, but at its heart, it was a 2D power house.

Protoculture Games’, Devil Engine, is that kind of retro – a horizontal 2D shmup that would have looked perfectly at home on a Japanese Sega Saturn. I appreciate that the Japanese Sega Saturn crowd is probably rather small, but allow me to assure the uninitiated; like Cave and Treasure’s finest mid-90s offerings, Devil Engine is an utterly gorgeous shooter – both beautifully retro and unequivocally gorgeous, it is a game that embraces its love for retro shooters without ever being hindered by the limitations of the time. It might have a few rough edges and doesn’t always run quite as smoothly as you might hope, but any minor issues (and the issues really are minor) are easily forgiven in light of its gorgeous art style and fantastic gameplay. From deep space to what I presume to be a very deliberate nod to the Neo-Tokyo of Katsuhiro Otomo’s, Akira, Devil Engine is a consistent if somewhat simplistic delight from beginning to end. 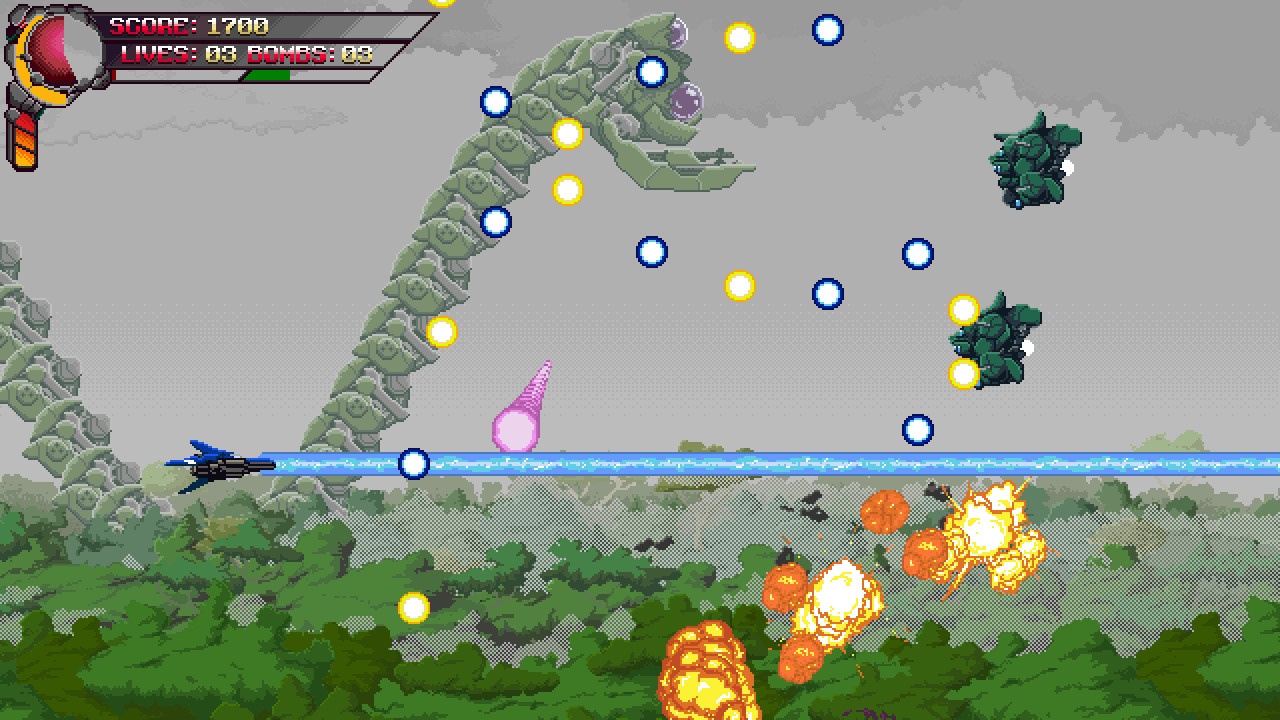 Calling it simple might seem like a slight, but in an increasingly complex genre, there is something to be said for the relative minimalism of Devil Engine’s base gameplay. There is depth offered by its addictive combo system and complex bullet patterns, but at its core, Devil Engine is happy to strip the mechanics back to basics and embrace its love of the Thunder Force’s and Gradius’ of this world. With 3 speeds right from the off and only 3 weapons that can be picked up as power ups as you play, Devil Engine is undoubtedly old school in its design, but like the best shooters of yesteryear, it’s the purity of the gameplay that ultimately makes it so consistently compelling.

Beyond the obvious draw of the leaderboards, Devil Engine does a great job of doling out new modes and cool aesthetic options to keep you playing long after you’ve died for the millionth time. And yeah, you’ll totally die a million times. This is a game that has two difficulty modes – very easy and very hard. Chances are, if you’re playing a game like Devil Engine, you’ll find it hard to bring yourself to take it down to very easy, so yeah, very hard it will be and, well, very hard it most certainly is. A lesser game would become infuriating in no time at all, but like the best shooters out there, Devil Engine instils that one more go mentality very early doors. 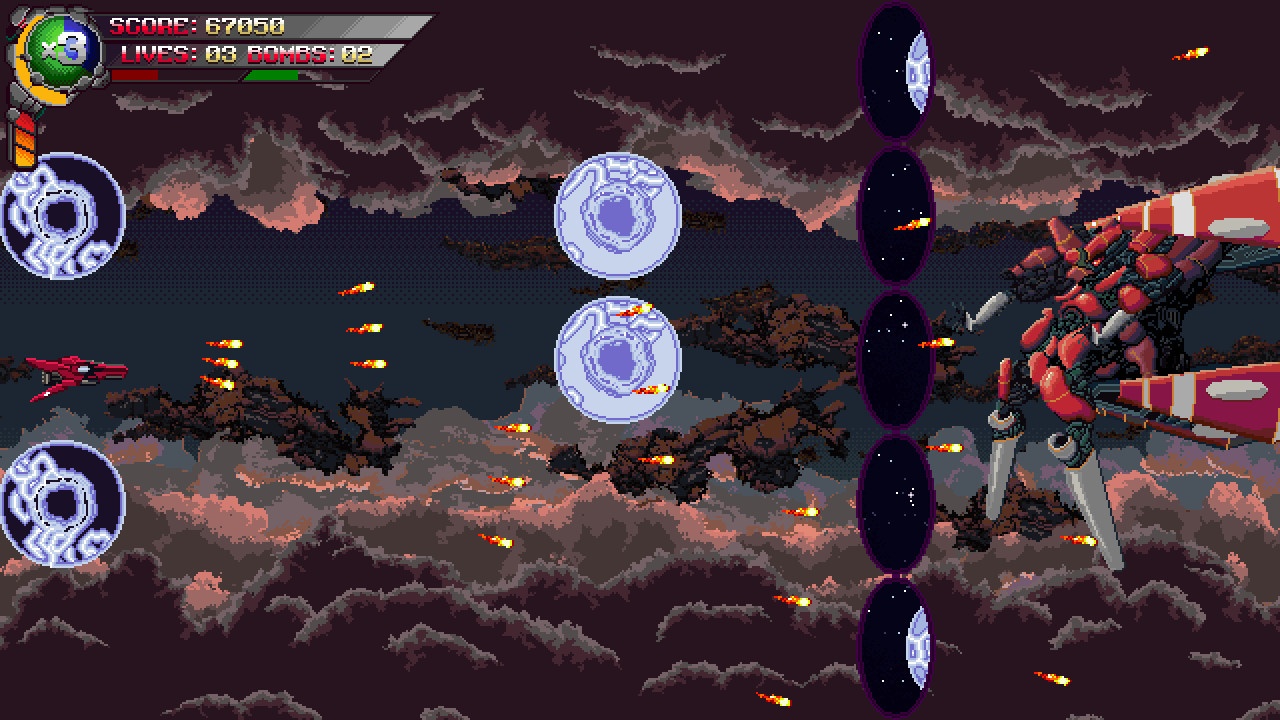 It’s not just a looker either – composed by Joseph Bailey with input from legendary composer, Tsukumo Hyakutaro (of Thunder Force 5 fame), like its gameplay and visual style, Devil Engine also finds that perfect audio balance too. Familiar without being overtly reverential, Devil Engine’s soundtrack is perfectly pitched, and alongside its dramatic audio effects and striking visuals, combines to create an energetic and consistently striking experience.

Some might argue that its basic to a fault (the weapon system could arguably do with a little more refinement), but as a counter to the increasingly complex shooters coming out of Japan, Devil Engine feels like a well-timed throwback, a game that embraces the design ethos of its inspirations while adding enough in the way of fine-tuning and additional content to make it comfortable in more modern company. The core gameplay never feels quite as sophisticated as the genre’s finest offerings, but what it lacks in exemplary level design, it more than makes up for in charm and sheer fun (I can’t remember a shooter that does explosions as well as Devil Engine). From an audio / visual perspective, the game is spot on, a 32 bit shooter dragged in to the modern age, and yes, while it does lack that magical sense of depth that is so apparent in the likes of Gradius V, its moment to moment gameplay is never anything less than hugely enjoyable.

The core gameplay never feels quite as sophisticated as the genre’s finest offerings, but what it lacks in exemplary level design, it more than makes up for in charm and sheer fun.