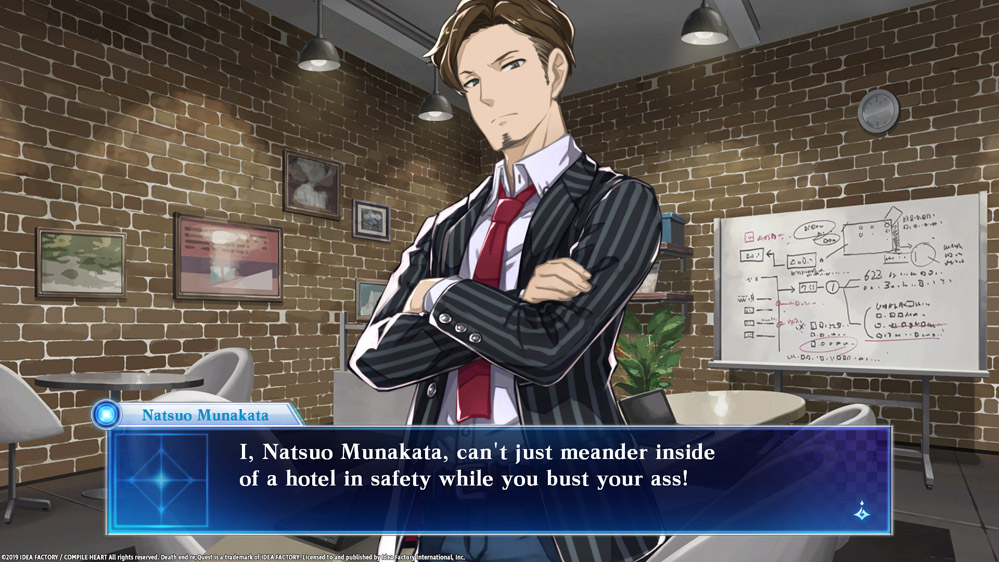 Death end re;Quest, referred to henceforth as Death end, isn’t the first to tackle the “trapped in a video game” theme, but it’s certainly one of the first to add elements of the occult. From the Store: “When video game programmer Arata Mizunashi receives an email from his missing colleague Shina Ninomiya, he soon discovers she is trapped as the only player in the virtual video game world they created–World’s Odyssey (W.O.D.).”

You play a more personal role as both Shina, who has no idea where her real body is or what the hell she’s been doing for the past year during which she’s been missing thanks to a plot convenient bout of amnesia, and as Arata who can see the effects their tampering in the digital world has on the real world. You find yourself waist deep in a conspiracy theory that threatens to fray the very fabric of reality and it makes for a pretty compelling reason to keep on playing.

If you’re familiar with IF or Compile Hearts, then you’re already expecting a certain quality of character design and Death end delivers. The playable characters and those essential to the plot are illustrated in anime style and the 3D character models are just lovely. Even better, your combatants will carry the actual weapon you equip them with, adding a bit of reward to levelling up and getting better gear. This has always been a pet peeve for me in RPGs where the model doesn’t reflect changes in equipment, so that scored some points for sure. 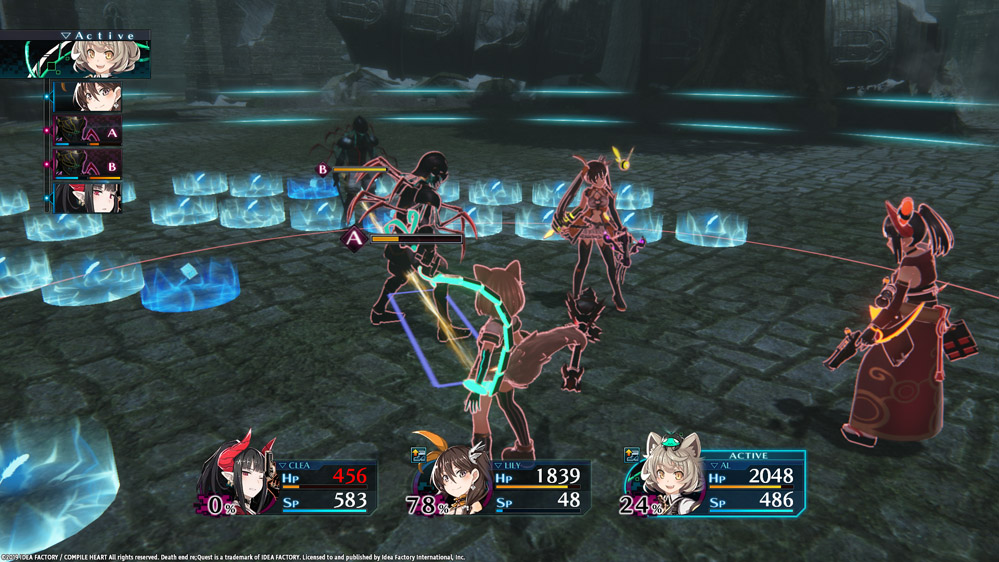 As far as audio goes, the music bounces between grungy guitar riffs and soaring orchestral melodies. The game strikes a good balance between the two, adding in flourishes to make scenes more tense and even taking advantage of radio silence to drive a point home.

Death end is voiced in both Japanese and English with English subtitles, so pick whichever suits you. I will note that the developers made a strange decision in having the main character, Shina, pant after moving some distance. It doesn’t matter what speed she’s moving, she’ll periodically and raggedly attempt to catch her breath, which is not only a little off-putting–its also pretty obtrusive. What makes matters worse is that if you play with English VAs, the panting is that much louder for whatever reason whereas the Japanese VAs are more subdued and almost able to be ignored. There’s no way to turn off this occurrence and it was something I just had to live with when I was exploring the field.

Normal progression consists of field exploration during which you must navigate through hordes of monstrous Martyrs to find a boss monster known as an Entoma Queen. Obstacles that impede your progress can be dealt with by finding key items within the dungeon and also by switching over to the real world, where you take control of Arata. Some items found in the game don’t belong there, which is your cue to investigate. These instances have you diving into the occult world and for those who are easily spooked, Death end can get pretty disturbing–per the warning at the beginning of the game. Once you’ve made progress in W.O.D. you’re presented with a story cut scene, which typically consists of live 2D characters speaking over a static background. I was a little disappointed, especially considering the game’s asking price, to find that action heavy scenes were also presented in this way, rather than in 3D or even as a series of images. The story cut scenes felt as though they had been made in a visual novel maker rather than in a powerful 3D engine, relying entirely on black backgrounds or static images combined with slides of text. 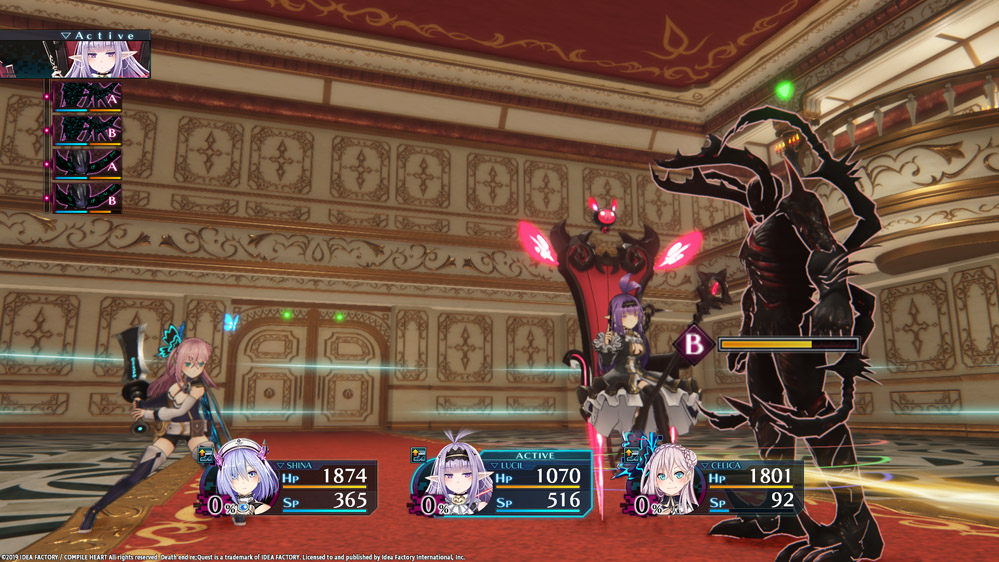 On that note: JRPGs are known to be long-winded, but Death end takes the cake. Some stretches of exposition last for upwards of half an hour, breaking for a quick battle or two, and then diving right into another text dump. This made progression slow to a crawl as I spent more time reading than really doing anything else. There are a total of 12 chapters to play through, during which you’ll complete what are called episodes. These instances are when you make decisions that could possibly end the game, which in turn allows you to reload your game and select the alternate option. Seeing as there was no real penalty to getting a game over screen, these moments were just another slowdown–especially since some of them didn’t end the game immediately, but led me down a rabbit hole of text only to end the game some time later and force me to skip through all the text I had just read. Like most VNs, Death end allows you to save at almost any moment during text cut scenes, so making use of this system will hopefully allow you to skirt around most of the hassle.

Battle, though nearly secondary, is challenging and unique. At its most basic level, combat is reminiscent of the Hyperdimension Neptunia series, where you need to position your characters–a party of up to three–so that the enemy falls into the range of their attacks. You can move freely around the battlefield, which is nice, and character speed dictates where in the battle participant list their turn will fall. There are basic attacks and abilities, but where the game breaks from the mold is the Flash Drive mechanic. Chaining together attacks has a chance of creating an entirely new skill, which the character can then use whenever they wish–SP willing.

Where the game really does something different is the bug system. The game Shina is trapped in is fraught with bugs, which result in paths being blocked and NPCs acting weirdly. These come into play in battle as tiles that will damage and corrupt characters who step on them. At the end of your attack chain, you’re able to knock back and enemy and aiming wisely will use them as a mop of sorts and eradicate the bugs on the field. A meter keeps track of the percentage of said bugs and, once it dips below 50%, Arata is able to use his knowledge of coding to give you some assistance in battle. Death end’s main draw is this helper function where you can change combats genre or summon a frightening foe you’ve defeated in the past. Now, don’t get your hopes up as changing genres functions in the most basic of ways, but it’s still a cool feature and one that I’d like to see expanded upon.

The RPG tag feels misleading considering just how much of the game is spent reading text and listening to voice overs. While Death end’s story is solid and the writing is good, albeit flawed from a translation perspective, it would have been nice to see more of a focus on combat and exploration. The battle mechanics are very much unique, but due to the nature of progression being split between the game world and the real world, it feels more grindy than it actually is. For the price, you could get a better RPG or a better VN, but likely not both in one, so this hybrid may be worth your time as long as you’re willing to overlook its flaws.

Sometimes more VN than RPG, Death end re;Quest offers unique gameplay and is set in a world that is being torn apart by supernatural phenomenon.