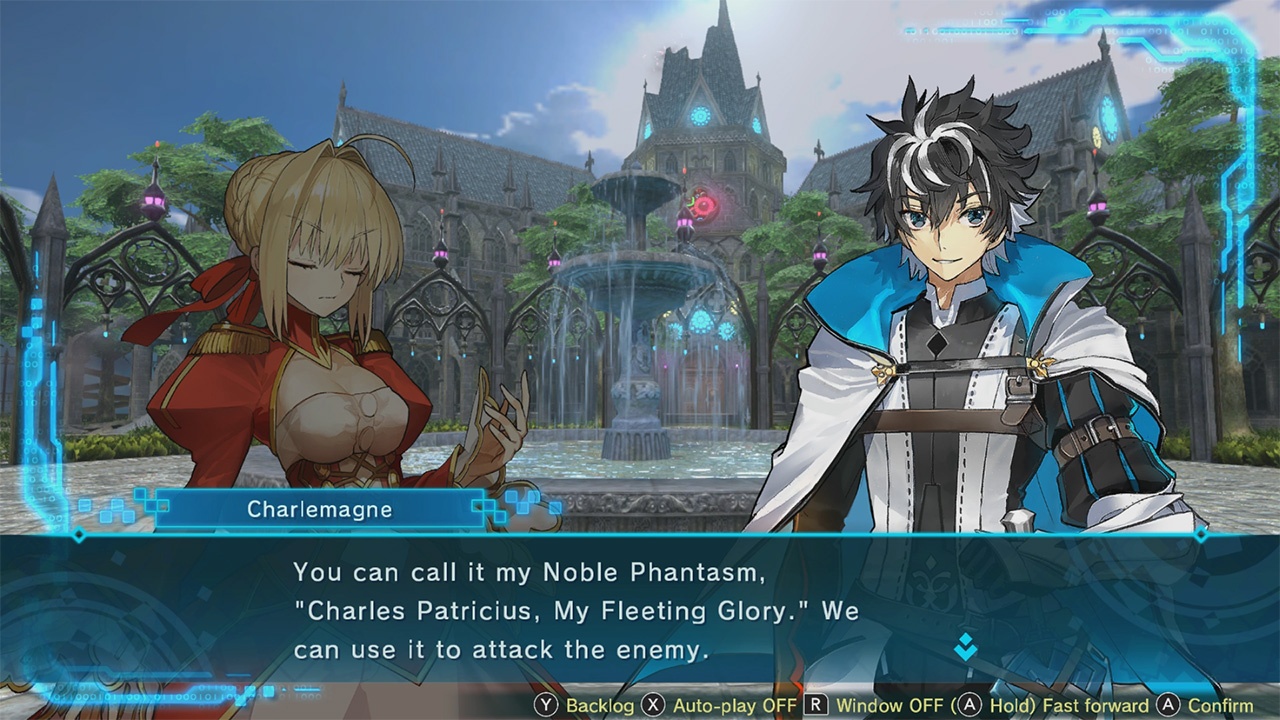 Marvelous is one of those gaming companies that really lives up to its name. When Fate/Extella: The Umbral Star landed on the Switch last year, it was a thoroughly confusing, complicated, and very enjoyable experience. It was clear, though I had no idea what the hell was going on for quite a while, that this wa a well polished sort of stone, one that XSeed took time and care in getting out to the masses, and was very easy to get sucked into. A musou game with a distinctly visual novel undertone, the storyline and the fates of Master, Nameless, Nero and other reincarnated(?) historic figures kept me busy for days on end. When the storyline concluded, I felt at peace: the kingdoms were united, I had a dope servant calling me her Husband, and the bizarre future of an anachronistic empire on the Moon seemed to be promising and bright. But who are we to simply leave the future to the imaginations of the fans? Marvelous has now created the sequel, Fate/EXTELLA LINK, and things could not be more insane, exciting, and the best of the musou inspiration.

Taking place shortly after the events of Umbral Star, Fate/EXTELLA LINK puts you back in the role of Hakuno Kishinami, the Moon Master, and everything seems hunky-dory in the land of Rome. However, the little Servant that you save/adopt at the end of Umbral Star, Altera, is almost immediately kidnapped by opposing forces of unknown design. Needing help, Master attempts to summon one of his Servants, only to accidentally call forth a new Servant: in my case, Charlemange, aka Charles. Charles helps me out, I get back to Rome, and we find out that things are bad all over, as Servants have apparently “awakened” and are fighting back against the empire we’ve carefully crafted. The dude at the core of it is named Rex Magnus, and his objective is to “Oraclize” all the Servants to make them see the best way to free themselves and make a better tomorrow is to destroy the current establishment, making it somewhere between an anarchist movement and a cult following. Taking care to make good decisions, you, Master, must help direct your Servants as to where to go, from the helm of Charlemagne’s flying fortress, which is such a cool ass base and really helps out compared to the last game.

Like Umbral Star, Fate/EXTELLA LINK lives and dies by exactly two elements: the musou combat and the connection to the characters. The story continues to get even more convoluted and insane from what you just read, especially when it comes time to face familiar and new faces in the arena. Defeating them will, over time, add more Servants to your roster, allowing you to better customize who you bring into battle and what sort of angle you’ll be approaching. 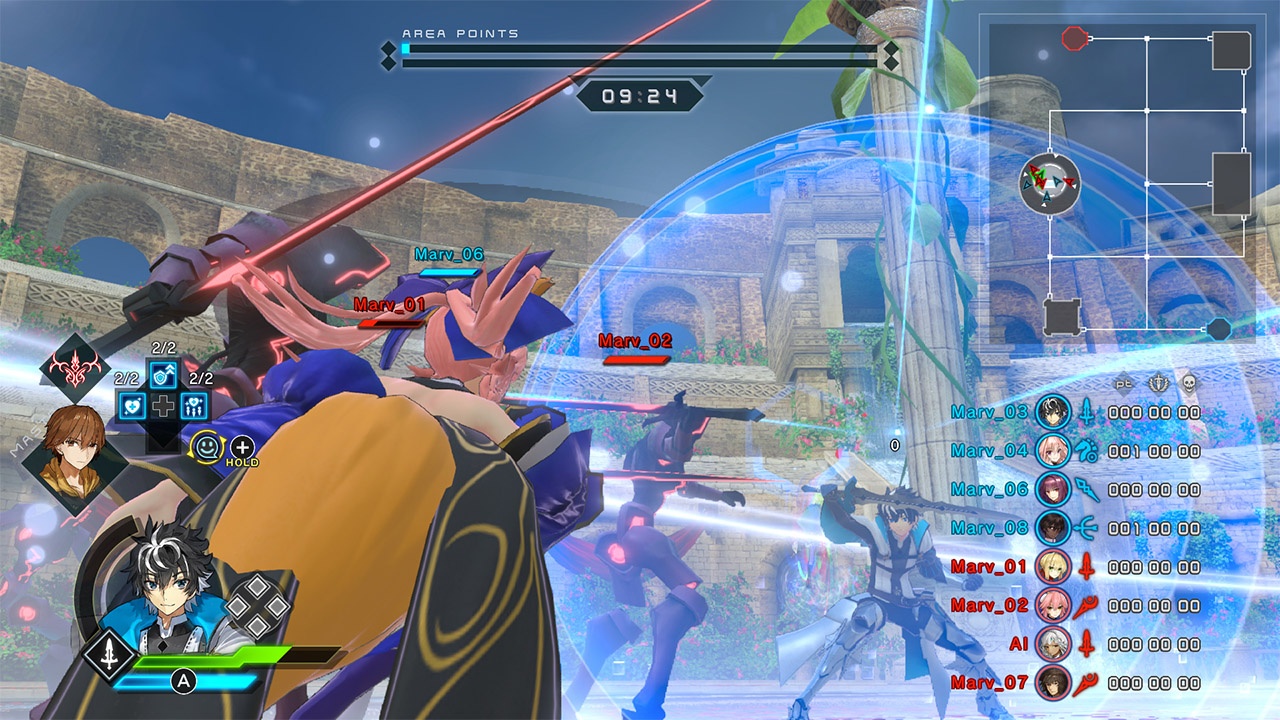 The gameplay has also changed a bit, for the better, when it comes time for the fighting. Instead of merely focusing on survival and defeating regional commanders, there’s more of a “quest” feel to each stage, asking you to protect Hakuno, help out other Servants, find and destroy jammers, and finding as many sparkly power ups and skills as you can. While smashing enemies to death with your standard attacks will always be paramount, there’s more focus placed on utilizing the different Code Casts in order to create more mayhem. What’s more, you’ll pick up and find things called Active Skills, which, ironically, grant passive attributes to your Servant, like increased stamina or the chance to add elemental damage to your hits. You can use some Active Skills in conjunction with additional Servants in a single battle space to create a Rush, where you and your friends mercilessly beat the holy hell out of a single enemy, and that’s all before you charge up enough to deliver a Noble Phantasm and wreck everything on the screen. If this all seems scary and like you need a flow chart, please relax and understand that reading the terms and trying to label everything you do is the most difficult part. Once you’re in the thick of it and just fighting, you don’t really think about the terminology, just the strategy of when to use what. And there are different difficulty levels for each stage, so feel free to stay on Easy until you get things balanced out. There are benefits to the higher difficulties, but there’s no joy in getting your ass kicked over and over, so take it slow and get the feel of things.

The Fate series has long been about fan service without going overboard, and they’ve done a solid job here in appeasing Fate fans as well as musou fans. In terms of gameplay and execution, it really seems like Marvelous has learned and added a lot from the original release of Umbral Star last year. Combat is significantly smoother, though I will admit it’s something like warming up a car. Everytime I boot the game, it takes a couple of minutes of jittering and stuttering before the game seems to settle into place, and, after that, it’s crystal clear. I was so disappointed when I saw the opening MV jump along, and then was shocked to see that actual gameplay with dozens of enemies on-screen had no problems whatsoever. It’s a bizarre situation, but it’s hardly insurmountable, and just spending a minute on base, walking around and maybe chatting with the Servants to build better bonds, seems to clear it right up. After that, you’re left with a game that has a comparable install size to Umbral Star with more Servants, more missions, and better looking fights. I’ll take that any day of the week.

Speaking of Servants, we’ve added several new ones with different styles that really help add to the variety of the game and combat. Most are returning from previous Fate games, including long time fan favorite Francis Drake, who’s massive pistols have come blazing onto the Switch. Most are quite cohesive, and I adored being able to use the brutality of Lancelot to justify my own approach to combat, which is, well, berserker. I can’t tell if I’m not using Robin Hood strategically or if we just don’t click well as a player/character type combo, but I was not a fan in any aspect. Each of the new Servants brings additional gameplay style and brand new conversations and side missions, essential for milking every second of the game that you can potentially get from the experience. Let’s not forget that, once everything is said and done with the main storyline (and unlocking the different endings, if you’re classy), we get to the real enjoyment of the musou games: the multiplayer. 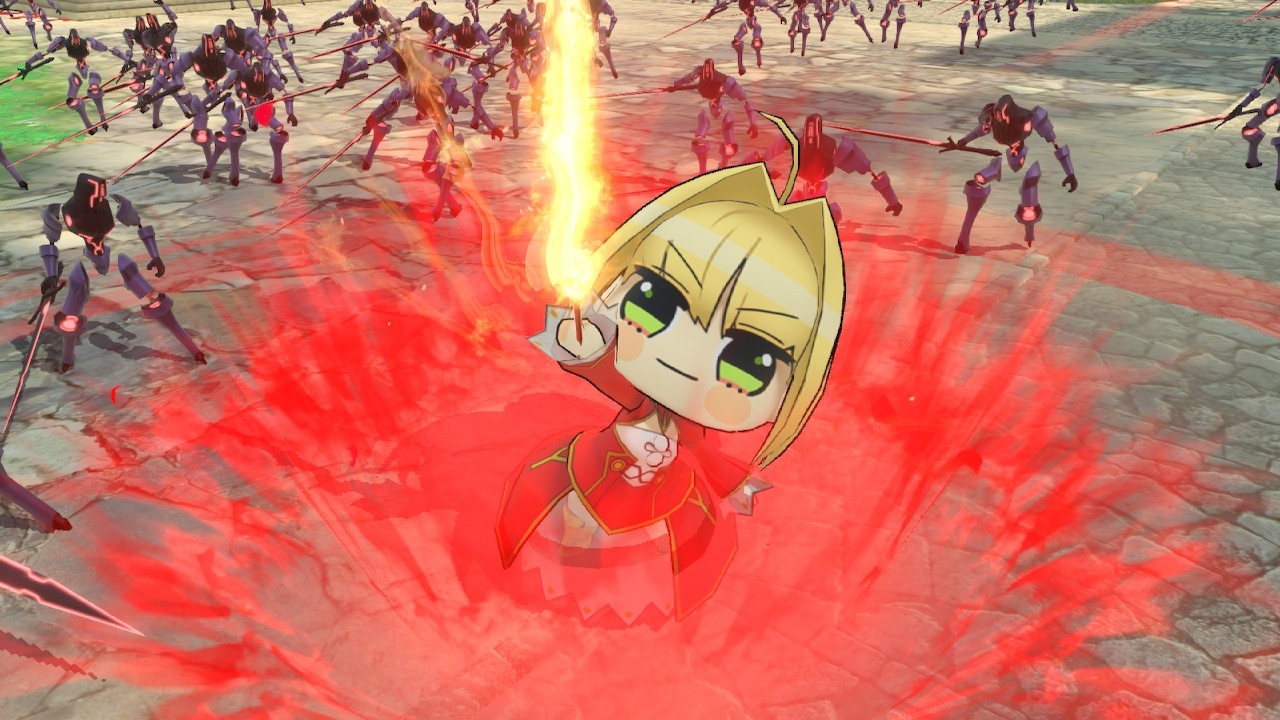 It should be noted that, at the time of this writing, I have been WILDLY unsuccessful in being able to connect to any random matchmaking in order to get Internet speeds and pings for the different kinds of multiplayer games available. However, I was extremely lucky to run into another holder of LINK and try the local multiplayer, and the results were incredibly satisfying. We did a King of the HIll style match, where we kept taking over different regions of the map and trying to maintain them as long as possible. In terms of latency, I had zero issues doing a wireless connection to someone else in the fight, and had some good laughs at trying (and failing) to assert dominance and defend my honor in the same breath. The game looks fabulous in handheld mode and I didn’t see a problem in playing this on the go against someone else. This was, however, only versus another player, I simply can’t speak as to how well it’ll work with four players, much less four players online. Good luck to everyone who’ll be enjoying that hurdle in the next couple of days.

The only thing that I can really say, in the end, for Fate/EXTELLA LINK is that there has never been a game that I’ve previously played that’s more dependent on you playing the first. While all the Fate games hold a common storyline (even with parallel universes and whatnot), LINK basically demands that you understand what happened in Umbral Star or you can get the hell out. There’s no hand holding, there’s zero explanation as to why everyone is living in a computer on the Moon named SE.RA.PH. or why Cladius Nero is a blonde lady, everything just is where it is. You need to pick up on the combat as fast as possible, and the tutorial there is brief but fair and definitely addresses all the changes from the previous iteration. And, when you look at those collector’s editions that are available (the Emperor of Paladin’s Edition is divine), it’s clear who the game is for, and there’s no fault there. Marvelous sees you, fans of the Fate series, and they respect and honor you. Here is the game you asked for. It has more Servants, more insanity, better performance and a ton of costumes (as well as the hilarious chibi DLC costumes baked in). This is for them, and that’s more than alright. Enjoy everyone, and good luck on the battlefields!

As the Switch continues to be the new battleground for Japan fandom games, Fate/EXTELLA LINK gives Type-Moon musou worshipers a new jewel in their collection.