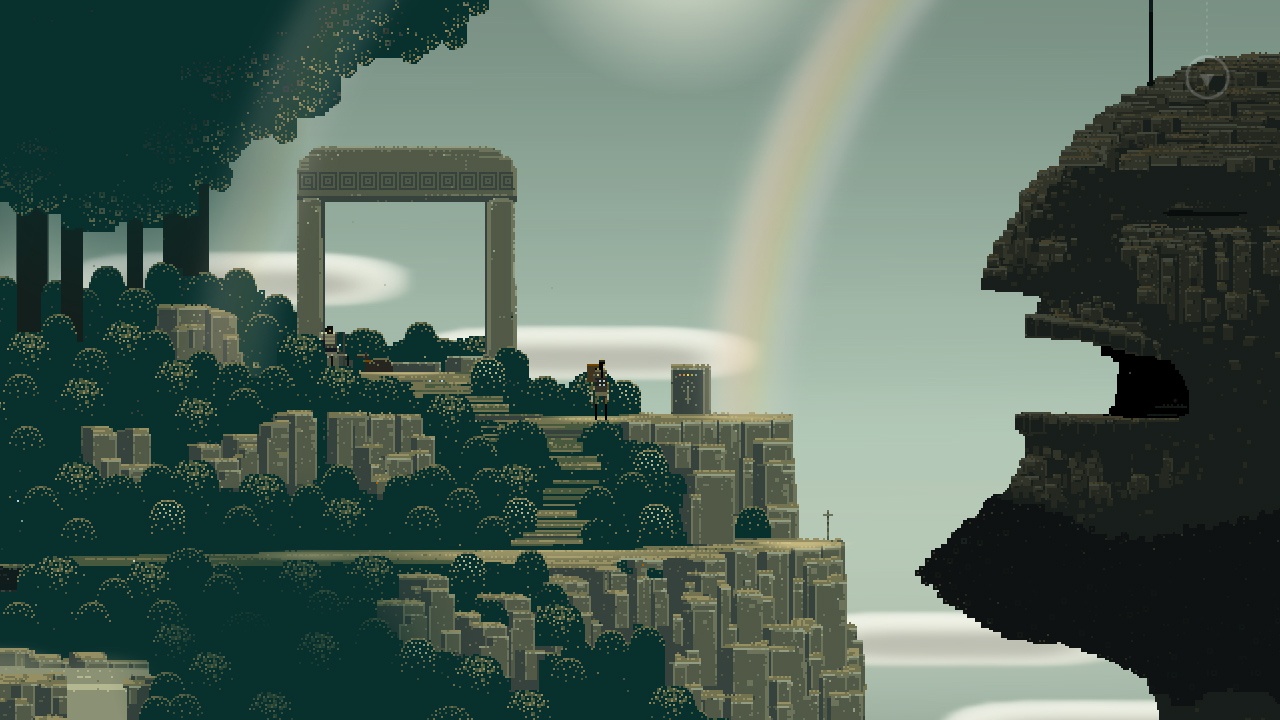 Ever heard the saying “Speak the Devil’s name and he appears?” I think I’ve namedropped Superbrothers so much in my reviews for anything with pixel art that it’s a wonder I haven’t ended up looking at a Switch copy earlier than now. Yet, when I think of pixel art being used for modern game design, I always circle back to this game. Maybe it’s because it was an early indie entry for me in terms of “someone doing something different in gaming.” maybe because it was one of the first iOS titles I ever played that actually did something for me in terms of engagement and excitement. Or maybe it’s because I’m still bumping the soundtrack all these years later. In any case, we can tick off another title from the long list of “awesome indie games that need to be ported,” because here we have Superbrothers: Sword and Sworcery EP from Capybara Games.

To start with, the story for Superbrothers is a very convoluted yet clearly explained one. You play an unnamed character, referred to as The Scythian, who is on a quest of an unspecified nature. You meet several characters, including a girl named Samae and a woodcutter named Logfella (and his dog, Dogfella). You align with Samae and Logfella, who decide to help you out on your quest to find something called the Megatome. It’s really crazy hard to talk about the plot of the game without spoiling everything, because the story, front to back, can be accomplished in under five hours, with some good trial and error, and talking any further about the story basically spoils the entire first chapter of the game. Let’s just say things go awry with the quest, and the cigar smoking narrator, called The Archetype, is trying to help you out, maybe, and you just sort of need to deal with it. 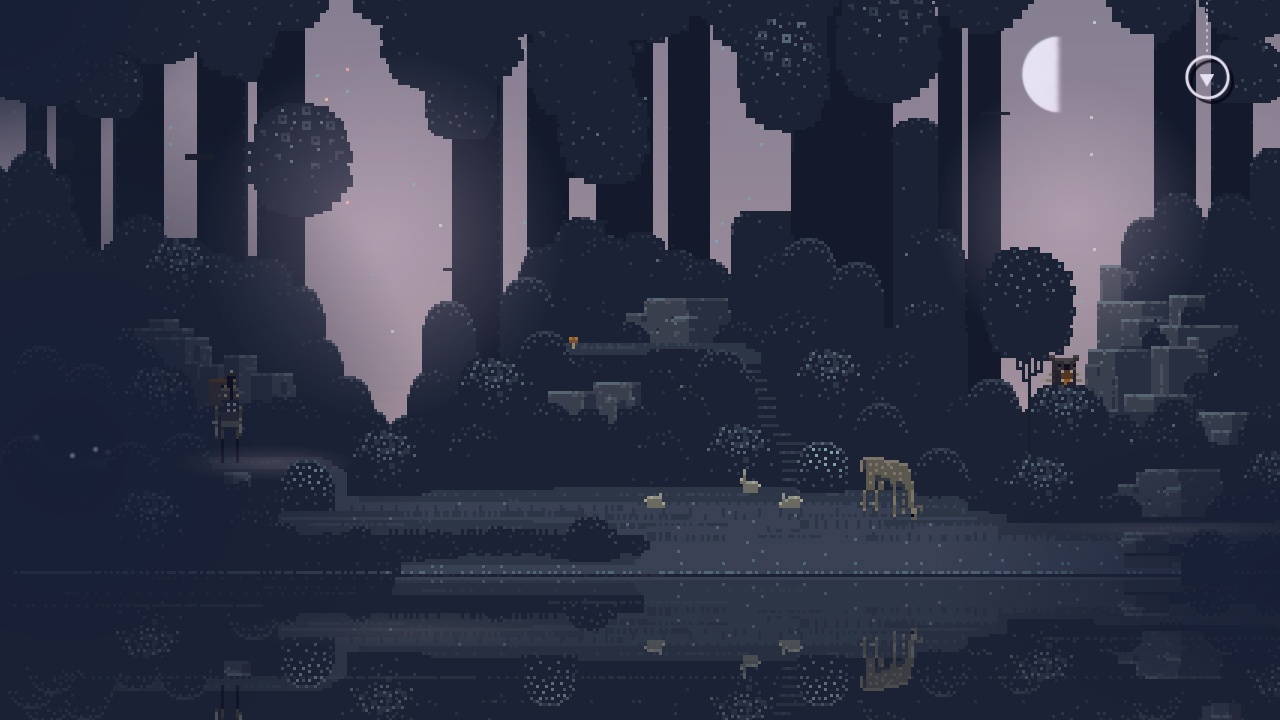 The story of Superbrothers: Sword and Sworcery EP is kind of, sort of a tried and true formula in terms of fairytales and what you would expect from a story about a hero trying to do something and not succeeding. There’s darkness, there’s magic, there’s dreams and visions, there’s music and sacrifice and a ton of details inbetween. What makes the game work, however, is the tonality that’s used to tell the different parts of the story. Capybara Games decided on this wonderfully weird tone shift where they continually interject moments of “low class” conversation into otherwise dramatic and explicit readings. Things like “The Tome had been wrestled successfully from the hands of darkness and we were super proud of that.” or “The gathering darkness suggested a sinister presence and that totally wasn’t cool.” It’s a funny, humanizing sort of trait that doesn’t pop up line after line, but it reminds you of how people nowadays would actually think and feel in these kind of fantasy settings. Not to mention it gave birth to one of my go-to lines whenever it’s a beautiful day: “We Scythians hate rainbows.”

As for gameplay, Superbrothers has a real interesting and intense balance between exploration, fighting and puzzling. You spend a good amount of the game (if it’s your first time) figuring out where to go, though there are plenty of clues and helpful indicators when you feel like things aren’t quite playing out where you’d like. Especially when you get to the 3rd EP and things get WEIRD, it’s helpful to have some nudges as to where to go, what to do, and when to do it. While the game starts out simple enough, you eventually add more things to your inventory, including the important Song of Sworcery, which is an ability that activates about 85% of the puzzles and engagement for the remainder of the game. While there’s almost nothing in the full experience that leads to things just “grinding to a halt,” there are a couple of puzzle moments where you’ll need to find out, through trial and error, just what you’re supposed to do. Which is next to impossible if you’re not listening to the soundtrack, which needs to be addressed right the hell now.

Jim Guthrie has done a bit of music in his lifetime, and you may have heard it in several indie films (including the score for Indie Game: The Movie). But I would argue, maybe even to his face, that the soundtrack for Superbrothers: Sword and Sworcery EP is his crowning jewel. Not only is the game totally focused around the music, the shifting ambience and atmosphere from the music helps to shape the world even better than the delicious pixel art style. You’re constantly pulled along with electronic waves to instill hope, pride, success, dread and acceptance in stages that would rival the loss of a dear friend.  This is as close as you can get to being reliant on the music to help you without straight up playing a rhythm game. There are hidden rooms and moments that have music specially tooled for those places, and ferreting them out and hearing everything that’s been composed for this game is a quest unto itself. This is one of those games that I have a hard time playing on the train because I need headphones to enjoy it and the likelihood of me missing my station is higher than you’d think. It’s seriously that good. 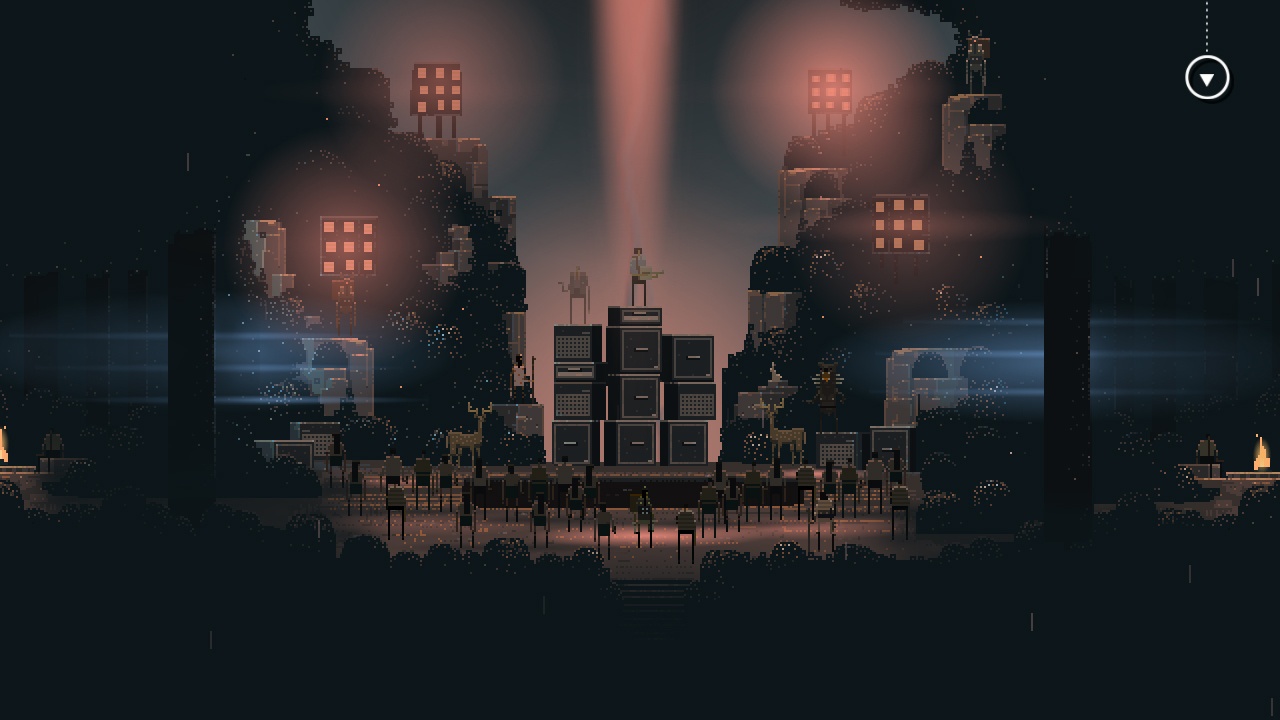 Naturally, the pixel art also brings the game to life in a whole other dimension a well, and should not be overlooked for a hot second. One of the reasons that I compare it so much to other games is because, when you’re zoomed in and looking at the Scythian, Logfella, a random tree or a Sylvan Sprite, you really see the blocky detail. Since first playing this on my phone almost eight years ago (oh God no), I was under the impression that the game would ONLY zoom out at certain times. This time around, however, I spent most of the game zoomed out, and I could sincerely appreciate the high level of craftsmanship that went into the game’s design. It’s a visual stunner, and it makes me wonder why I don’t play more games that look like this. I think I’m just jaded and need more time playing games that I enjoy instead of whatever wanders into my queue. Oh well.

One last, important note. Superbrothers: Sword and Sworcery EP is very, very aware of the fact that it’s been around for a while, and it should be noted that care and detail went into this port. Firstly, I love that the Archetype addresses that the social media features have been culled, because that was an aspect of the game that didn’t make a lick of goddamn sense to me back in the day. Secondly, I can’t say with certainty that the music has been remastered, or that it just sounds better on my Switch than an iPhone 4 did, but the score is so much more dynamic and clear than it used to be. Lastly, there’s been a lot of consideration into how to play and giving the player choices. The touch screen approach is still grand if that’s your thing, but you don’t then have to move into a floating cursor for a point-and-click variant. Mapping actual movement to the right directional stick is so pleasant and makes certain events (like running for your damn life) more executable than ever. Fast zooming in and out with a press of a button allows for exploration and appreciation in the same swing. And opening the Megatome with minimal effort means more time reading the insane, inane thoughts that everyone is having over what’s going on in the world.

This is a wonderful piece of art that hasn’t had a chance to tell its story on a console before, and the Switch is the perfect place to let that tale unfold for a brand new generation of gamers and would-be artists. Get some good headphones or speakers. Clear your schedule for the afternoon. Indulge what will be coming for you. Believe when I say it’s a better use of time than re-watching another season of the Office on a rainy Sunday.

The legendary marriage of gameplay, design and soundtrack comes to the Switch, the first console port every for this amazing indie adventure.