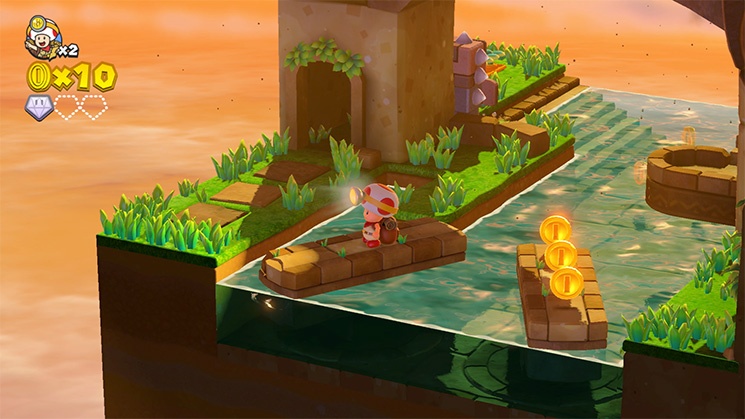 Nintendo has a very, very hard time admitting their mistakes unless they’re cataclysmic. When we look at misfires in the Nintendo history line, the Virtual Boy stands proudly at the front of the line, it’s less-than-one-year lifespan a testament to Nintendo being able to read the writing on the wall. Nintendo isn’t ignorant, they just try their best until it really can’t go any further. People call the WiiU a failure, but it was more than that in terms of innovation, accessibility and game library. It just didn’t sell as well as the Wii did, and that was most certainly a marketing problem. Yet Nintendo recognizes all the great games that came from the WiiU, which is why so many of the console exclusives (Mario Kart 8, Tropical Freeze, Bayonetta 2) made their way to the Switch for a new generation to find. And now, here, we see one of the crown jewels of the WiiU, brought to the Switch with not only a fantastic port, but with some brand new content and interaction. This is Captain Toad: Treasure Tracker, and it’s now available with a Digital Bundle of DLC.

Captain Toad was a mini game of sorts that was spawned in the ill fated (but unbelievably fun) Mario 3D World, which will hopefully find its way to the Switch one day as well. Captain Toad eventually spun off into a solo title all his own, which is where we stand today. Everyone’s favorite mushroom mascot from the main Mario marathon gets to set out in, of all, things, 3D puzzle games. Captain Toad’s primary objective for each level is to work his way through a multi-tiered, cubic room with enemies, pitfalls, traps and goodies strewn about in order to get to the star at the center. Captain Toad cannot jump, a massive caveat for people used to doing the classic plumber stomp, and, instead, must rely on running away or finding a turnip (callback to Super Mario Bros. 2) to throw and dispatch random enemies. Toad’s story is to get back Toadette, his fellow Treasure Tracker, who is kidnapped by a massive bird during a particularly ill-fated star hunt. Captain Toad will make his way to Toadette and rescue her, but he’s gotta pick up treasure along the way. Hey, we gotta pay the bills somehow: no sense rescuing someone and bringing them back to a mushroom house that’s been foreclosed upon.

One thing that really works for Captain Toad is that, for a majority of the levels, it seems to circle back to the core of the original Nintendo mission statement in terms of gaming, enjoyment and interaction. The controls are extremely uncomplicated (not simple) and allow for nearly everyone to participate and play. You learn the limitations of Toad early on, seeing how fast he’s able to run and how quickly things change for him when hit by an errant enemy missile, or run into an aggressive Goomba. Though the game isn’t a full hand holder with keeping you invincible or showing you where to go (quite the opposite), the pace of the game feels unhurried, patient, and gradual. You slowly piece together the correct pathway, what needs to happen next and what sequence, and then go from there. It’s almost like a game of self discovery for a majority of the execution, wherein you are sometimes surprised by how Captain Toad reacts to falling down, finding certain things hidden amongst the brush, or watching him emote throughout different terrifying but exhilarating moments. 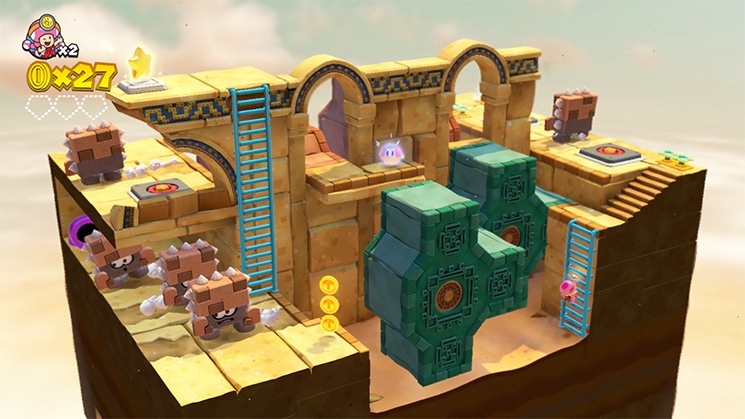 When Captain Toad: Treasure Tracker decides to change gears and offer you a little something extra, that’s when you get to see the fine attention to detail that went into the Nintendo Switch port. When it comes to the standardized levels, the transition from manipulating the perspective by rotating via R stick or physically moving the Switch around is akin to what was done with the WiiU gamepad, so there’s nothing as spectacular there. However, adding in the movements and details that come with the Switch give it some serious flair. For example, the minecart levels (wherein you change to a FPS situation and hurl turnips at things) is infinitely smoother than the last generation of gameplay, and I felt I was seriously more successful in hitting targets the first time through. Additionally, things like spinning wheels to rotate around stages was more enjoyable using the JoyCon than drawing circles on the big WiiU pad (that poor touch screen got so much damage). In terms of the Captain Toad experience, having played it on three consoles now (WiiU, 3DS and Switch), this is the best version, both in terms of content, graphical representation and performance. Hell, even when you have those bizarre stages later when you’re trying to handle five Captain Toads at once feels so much more satisfying in the hands of my Switch than clunking around with the WiiU Gamepad.

Additionally, for the first time in forever, we have the Digital bundle edition to add the new, Switch-exclusive DLC directly into the game. Players should know that the core game itself has a ton of content already; there’s the additional stages from having a Mario Odyssey save file, there’s the “find the 8-bit Toad” extra challenge, and there’s actually doing a total success of the core missions, which is an endeavor unto itself (collect 190 coins in Kamek Keep, are you kidding me?). The new courses, which bring Toad and Toadette together to find a special crown hidden someplace far, far away. These special courses are not for newcomers, as they involve a lot of out-of-the-box thinking and dealing with some serious head scratching, even from the very first stage. You have to throw the key EXACTLY where the game plans in order to be able to finish the game at all. Though difficult, these levels just feel like a natural next set of missions for our fungi frontman, with perfect cohesion to how the rest of the game felt. Captain Toad doesn’t miss a beat, and you would be shocked to learn the amount of time that’s passed between the first incarnation of the game and the current version. 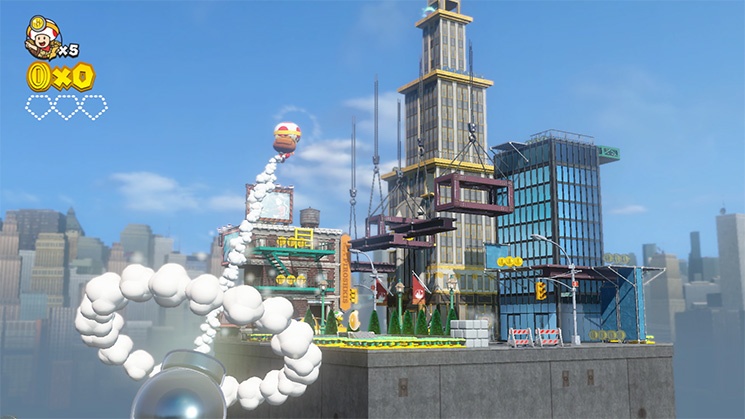 The only, ONLY problem I have with Captain Toad is the touted “two player version” that comes from the game. When I first read that, I got excited, trying to figure out how we’d make the game work with a second Toad or Toadette on the screen, and if the levels themselves might change a bit in order to accommodate the extra adventurer. Instead, they’ve taken a classic page out of the Mario Galaxy playbook, and the second player is an invisible presence who can interact with the screen from an unseen vantage point. This is definitely something targeted at having a child or younger sibling help out in the game without making any issues, but the effect sort of hamstrings the overall success. For one, sometimes the second player can just straight up take out enemies in situations where Captain Toad could not, eliminating some of the challenge. What’s the purpose in timing things perfectly to outrun the ShyGuys if Timmy is just going to ping them from afar? Additionally, it takes you out of the moment when you realize that a second player is keeping watch for you. It changes your gameplay style from cautious and calculating to more relaxing and almost foolish, charging ahead and knowing that some of the bigger hurdles are being taken care of. I wasn’t a fan, but I’m sure there’s a grateful older sibling or parent that can let their young ward be a part of the game without relinquishing the whole console.

The biggest word that I have for Captain Toad is charming. The game is such a delight from start to finish on multiple levels. The aesthetic is right in line with classic Nintendo ideas, but using modern technology and available graphics engines to deliver the best situation. The soundtrack is ambient and cheerful, even in scary ghost houses, so that you never lose sight of who is playing or where you’re going. Each stage asks for a significant amount of time to be invested in both completion and then full exploration, so it’s a game that can be done in a massive sitting or broken down over multiple trips. Lastly, the potential for even more Captain Toad in the future is high and probable if the DLC is successful: I have to believe it’s a joy to develop as much as it is to play. If you’ve never played before, the Nintendo Switch is the right place to find Captain Toad and see where his adventures lead. If you’ve been here before, you may be hesitant to double dip, but having Captain Toad be portable and top quality is worth the secondary price of admission. C’mon, everyone, let’s go on an adventure!

The only game in the world where I wish they would make another Amiibo so I could specifically have a Captain Toad on my shelf.