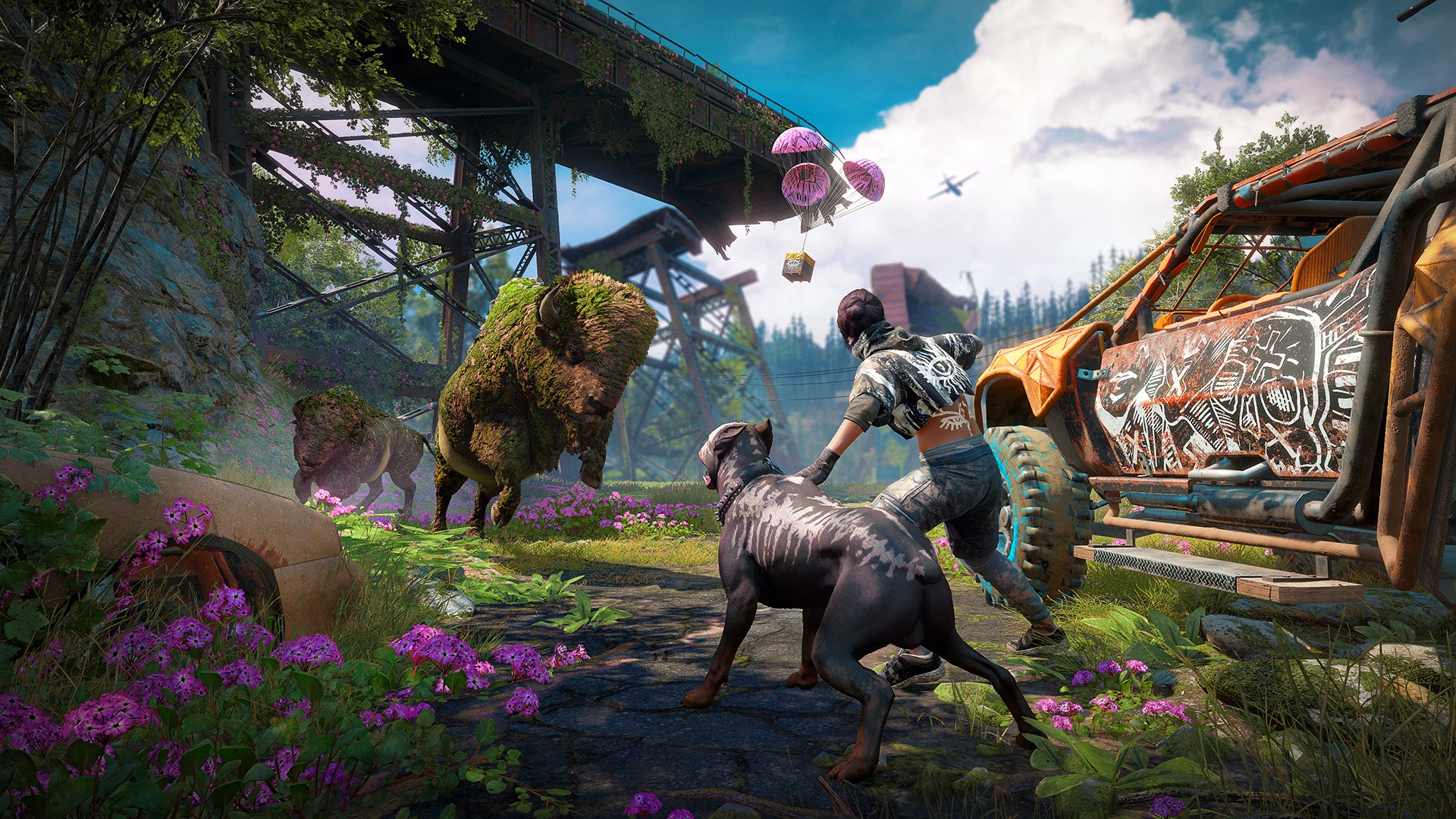 Ubisoft’s Far Cry series is known for mixing action, humor, and open-world checklists into predictable but fun 20-hour experiences. If you’ve grown accustomed to that brand, you’ll find more to love in Far Cry: New Dawn, a direct sequel to Far Cry 5 set 17 years after that game’s explosive finale. You’re best off having played and completed the previous entry, but newcomers are offered plenty of exposition to get the gist of things if they’re fresh to the story.

The game picks up in a time where civilization is rebuilding and thriving in the post-apocalyptic remains of Joseph Seed’s grand plan to destroy everything. You’re still exploring Hope County from the previous game and even visiting plenty of old landmarks, but things have no doubt changed since your last adventure in Montana. It’s very aesthetically obvious that 17 years have passed, with vegetation clearly taking over and painting the world with bright pink flowers and gorgeous greens.

Even the gameplay has grown for better or worse. Many of Far Cry 5’s mission types are in place, such as treasure hunts or tracking down new party members to aid you in combat, but much of the core gameplay loop has been streamlined effectively. For instance, I found that I vastly preferred New Dawn’s approach to crafting, relying wholly on finding resources in the world to create and upgrade weapons along a tier list from best to worst. Since enemies are now ranked from level 1-3 in difficulty, it’s extremely important to collect those resources and continue to level up your favorite weapons to stay ahead of the game. Waltzing into a level 3 enemy encampment with lower-tier weapons will almost always end poorly. 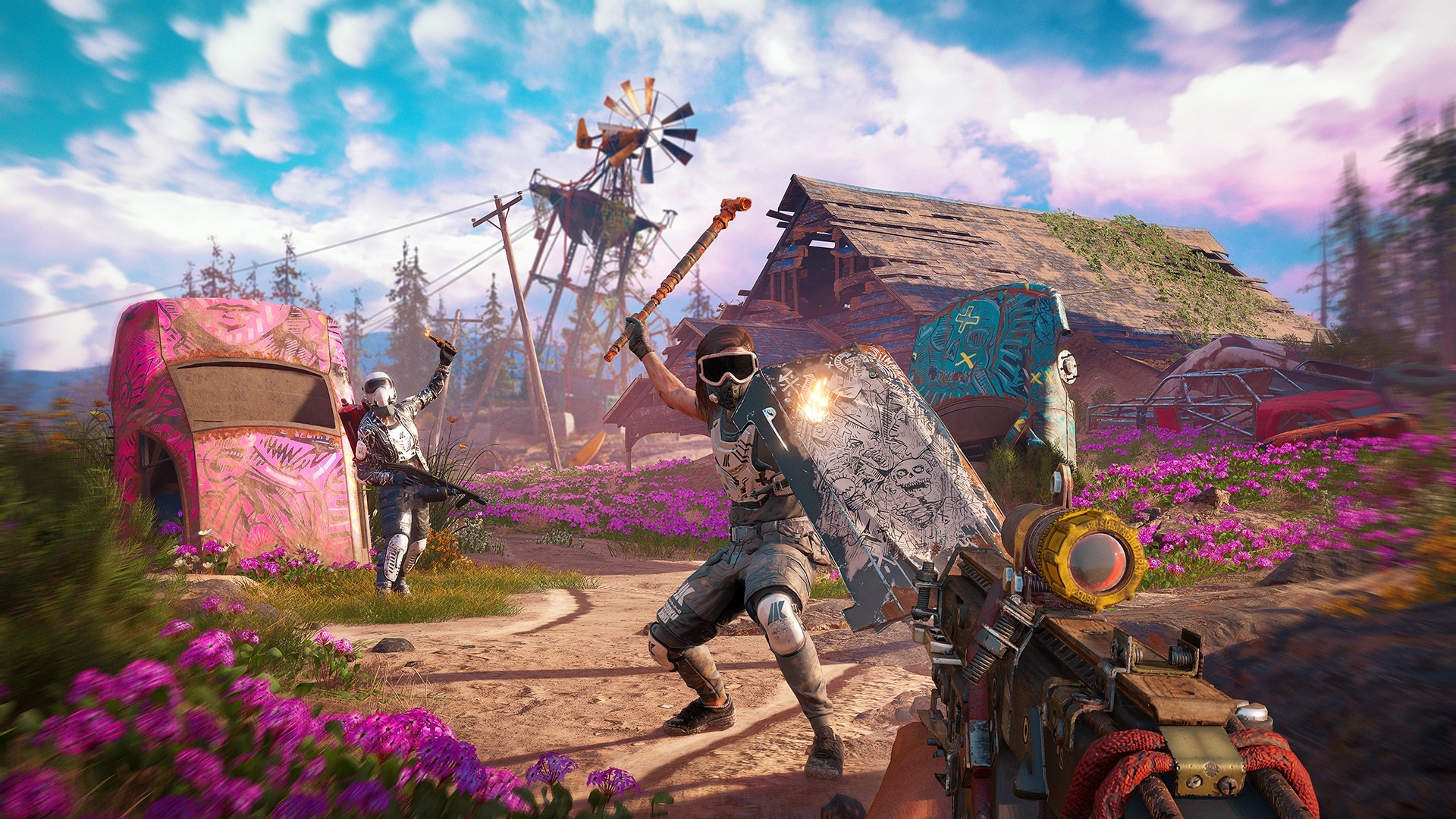 While most of the weapons are the generic and expected, such as shotguns, bows, and machine guns, the addition of a saw launcher changes up gunfights dramatically. It’s quite easy to mow through large swaths of enemies by firing a barrage of saws at them, and since the saws ricochet and slice and dice randomly, you can rest assured you’ll make some contact even if your aim isn’t perfect. It’s overpowered in most scenarios, so it’s always worth keeping on your weapon wheel alongside a stealth weapon and some all-out firepower.

New Dawn opts to bring Gun for Hire and offers up a bevy of new faces. They’re all colorful characters worth tracking down and bringing on board, but some feel unbalanced compared to others. A few of them seem to drop in combat quickly due to being relatively basic companions, while others feel like unstoppable super-heroes. Thankfully, the best characters to use also happen to be the most likeable, such as an old lady appropriately named Nana who uses a sniper rifle with pinpoint accuracy while delivering humorous quips. I wouldn’t have minded a few more solid options, but with each character having such unique and hilarious personalities, what’s offered always feels like enough.

New to the series is a home base. You’re given freedom to upgrade various facets of the base throughout the game, but I found focusing on one or two major areas worked best for me. Obviously, ensuring you have upgraded weapons is always a top priority, so pumping most of your resources into offensive options never fails. Seeing your small encampment expand and feel like a living, breathing home for the rebellion can be emotionally rewarding, but I would’ve liked to have seen this mechanic expanded beyond the very simplistic delivery on offer here. Nevertheless, it’s a nice change of pace from climbing radio towers. 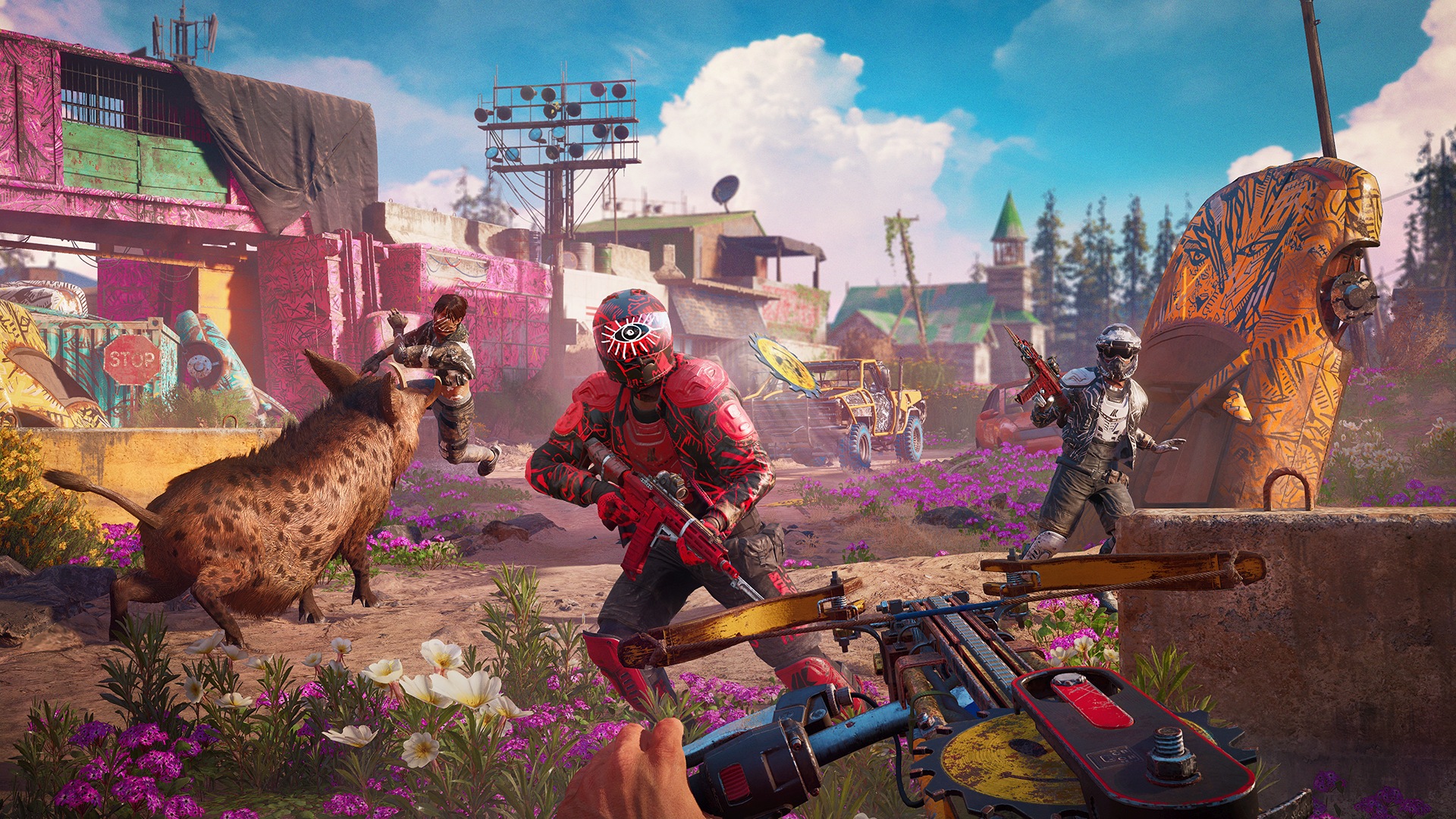 This central hub is also home to Expeditions that take you to new and exciting locales for short snatch-and-grab missions. They’re pivotal to undertake for anyone looking for the best weapon upgrades as they’re one of the only methods available for finding what is best summed up as “epic” parts. They can become a bit repetitive after a while, but the brevity of the missions keep them from being too much of a hassle.

If you’ve played a Far Cry game, you’ll be no stranger to clearing outposts for fast travel points, but this time around it’s one of New Dawn’s best features. Since the game is based around 3 increasing difficulty levels, Ubisoft decided to include the ability to reset an outpost and tackle it again at a new difficulty. This can be incredibly fun to tackle, especially since each difficulty decreases the ease of a methodical stealth approach and forces you to play smarter. But even better, overcoming the increased challenge rewards you with more resources to use for upgrading your home base and its various areas.

There’s not a lot about New Dawn that drastically alters what players have come to expect from a Far Cry game, but it consistently engaged me enough to make me happy to return to Hope County. It touches all the highest points with its usual humor, tight gunplay, and interesting missions. Considering its reduced price point, there’s no reason a Far Cry fan should pass up this opportunity to revisit Montana and see things through to their rightful end.

Considering its reduced price point, there’s no reason a Far Cry fan should pass up this opportunity to revisit Montana and see things through to their rightful end.