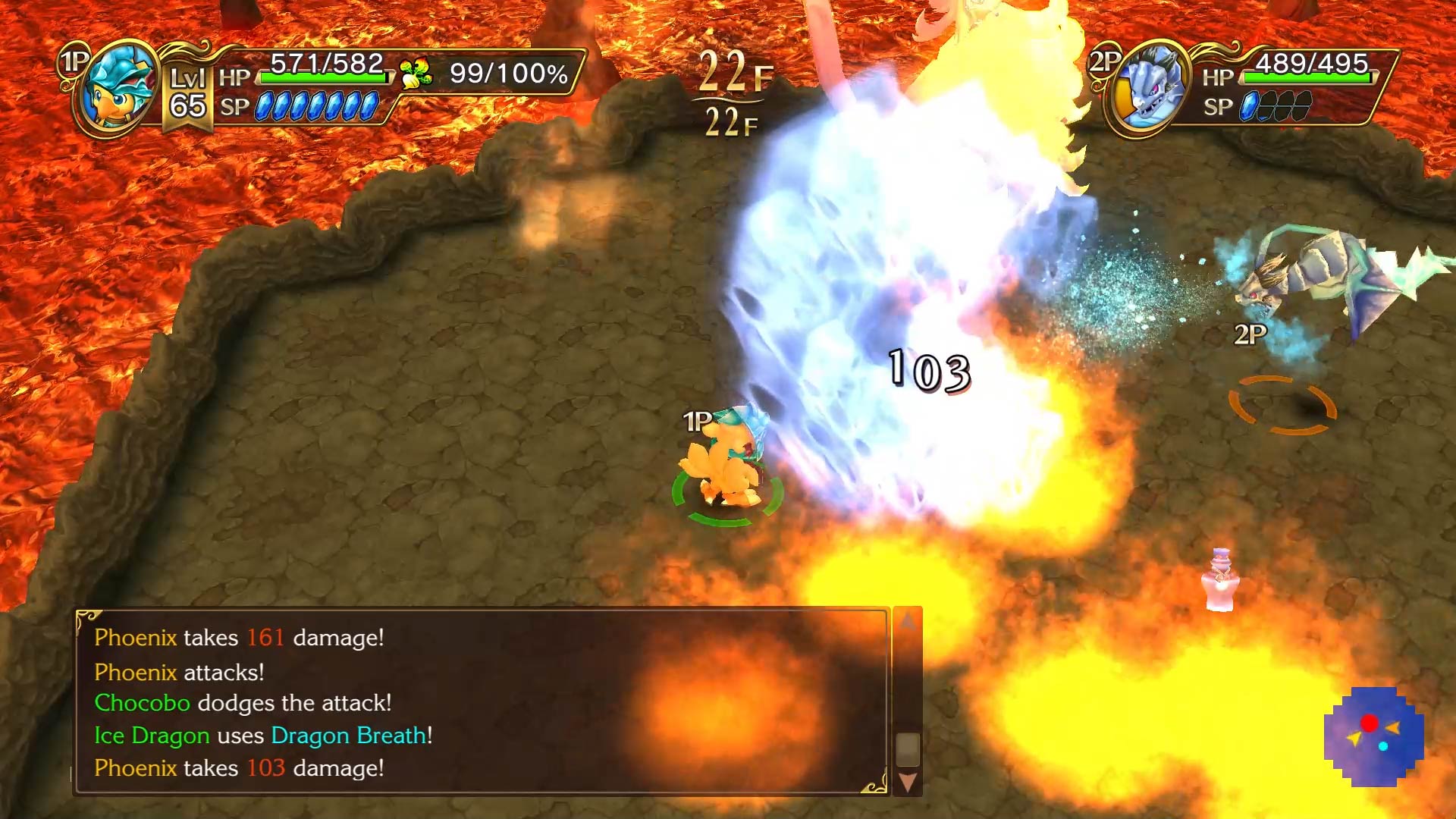 Chocobo Mystery Dungeon (henceforth CMD) is adorable, but its outward appearance belies its challenging and sometimes unforgiving nature. You play as Chocobo, who gets sucked into another world and finds himself and his treasure hunting partner, Cid, in the town of Lostime. Time isn’t the only thing that keeps getting lost here–every time the bell in the town square rings, the people who hear it lose parts of their memory. Fortunately, a mysterious green-haired baby falls from the sky in an egg and allows you to enter the minds of town residents and restore what is lost. It’s up to you to figure out why things are the way they are and how to get back to your world. True to the genre, CMD has you delving into dungeons, fighting off enemies, and managing a limited inventory. The name of the game is risk versus reward and you’ll have to play strategically in order to progress.

​CMD is split into an overworld, which acts as a hub where you prepare for your dungeon dive, and the dungeons themselves. There are shops and characters to meet, which themselves serve as dungeons thanks to the forgetful nature of the town. There are your typical places like a storage centre and item/equipment shops, but there are also places to buy mystery seeds and to sell your fish–two of just a few activities you can take part in outside of dungeons.  Dungeons are comprised of floors, the total of which are shown to you from the get-go. Chocobo moves across a grid and each tile traversed, each action, counts as a turn passed. Enemies move based on turns as well, so planning out your moves is key to getting the upper hand in combat. Traversing dungeons also drains your hunger meter, meaning that dallying too long will leave you without Gysahl Greens in your belly and your HP will drop.  As you explore, you’ll encounter traps and treasure aplenty, which introduces a risk versus reward factor: should you keep exploring with the hopes of finding better equipment or run the risk of running out of supplies, getting hungry, and turning tail and fleeing? 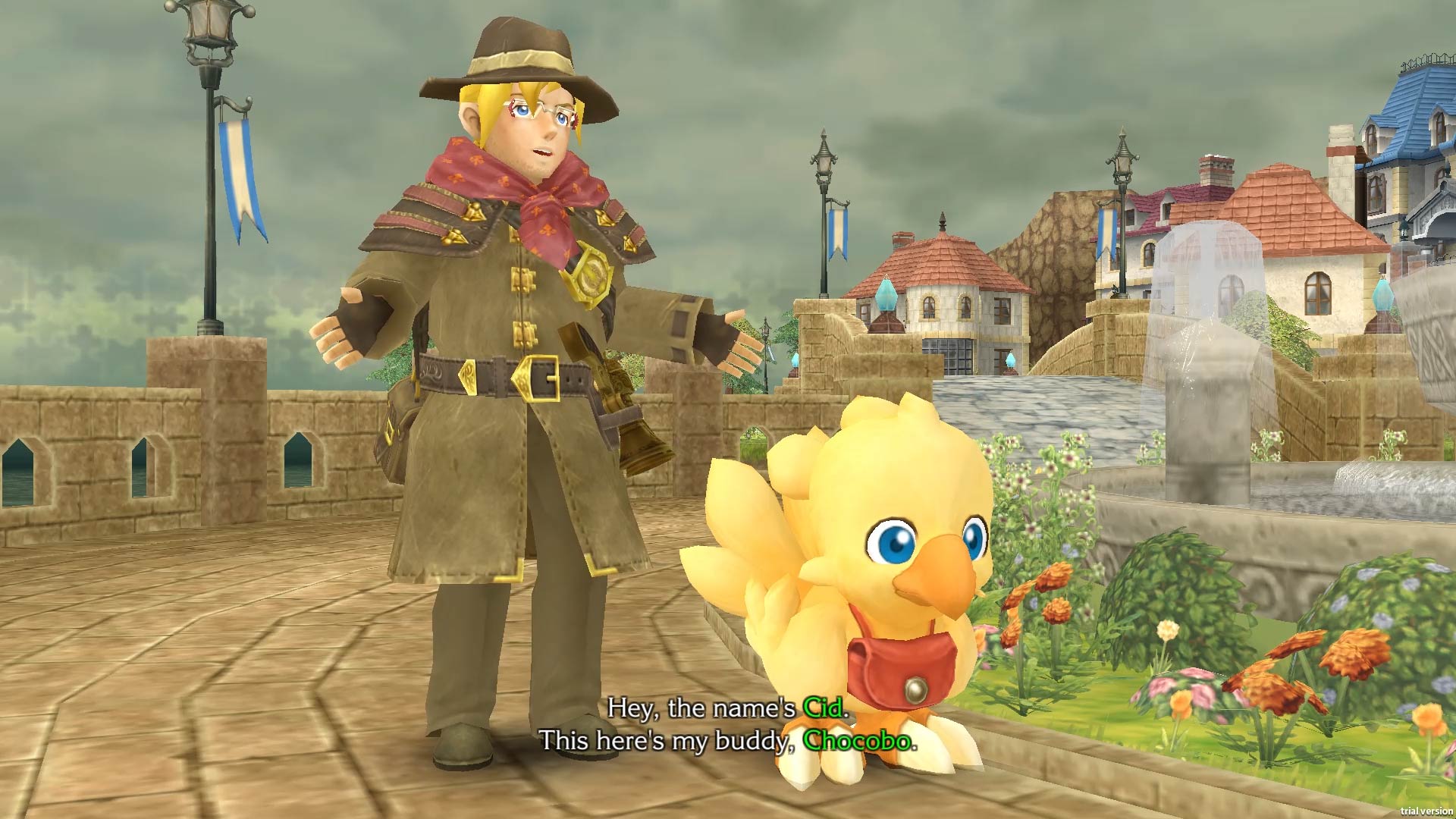 ​As a genre veteran, I can safely say that CMD checks many of my boxes. First off, there’s the job classes. I’ve always been a fan of these in RPGs. They’re not only familiar to fans of the series–Black Mage, Paladin, Thief, etc–they’re handled well as far as learning skills and levelling up. You can change classes before entering a dungeon and enemies you defeat reward you with job points (JP) towards your equipped class. Skills are learned automatically upon gaining a job level, which unfortunately limits the number of skills you know at first and progress can be slow. Buddies, my second checked box, are treated the same way. I’m old school and /catching em all/ is in my DNA by now. Defeating enemies within a monster class nets you buddy points (BP) that unlocks buddies within that class.

There’s a hierarchy of monsters within a class and any BP earned goes towards unlocking each monster in order by tier. As long as you’ve defeated the monster in question at least once, you’re able to unlock and pair up with that buddy. The third box CMD checks off is the “one more run” mentality the roguelike aspects inspire. When you’re defeated, you lose everything that you’ve picked up during your run, but it never feels like the game has it out for you and it feels possible to dust yourself off and try again. This is made possible by fair check points that you can skip to in longer dungeons. Finally, there’s the equipment management aspect of the game. I’ve always had issues with limited inventories in MMOs and the like, but in dungeon crawlers for whatever reason it’s almost fun to play inventory Tetris and figure out what’s important enough to keep versus what isn’t.

​The game is adorable. Seriously. Chocobo and his friends have been chibi-fied so that they’re cute and cuddly–yes, even monsters like the hideous Malboro. The music, a jazzier version of the familiar Chocobo anthem, is something you can tap your talons to. Characters are fully voiced during cutscenes and partially voiced during normal gameplay, and the writing is intriguing enough to keep you playing even when the going gets tough. 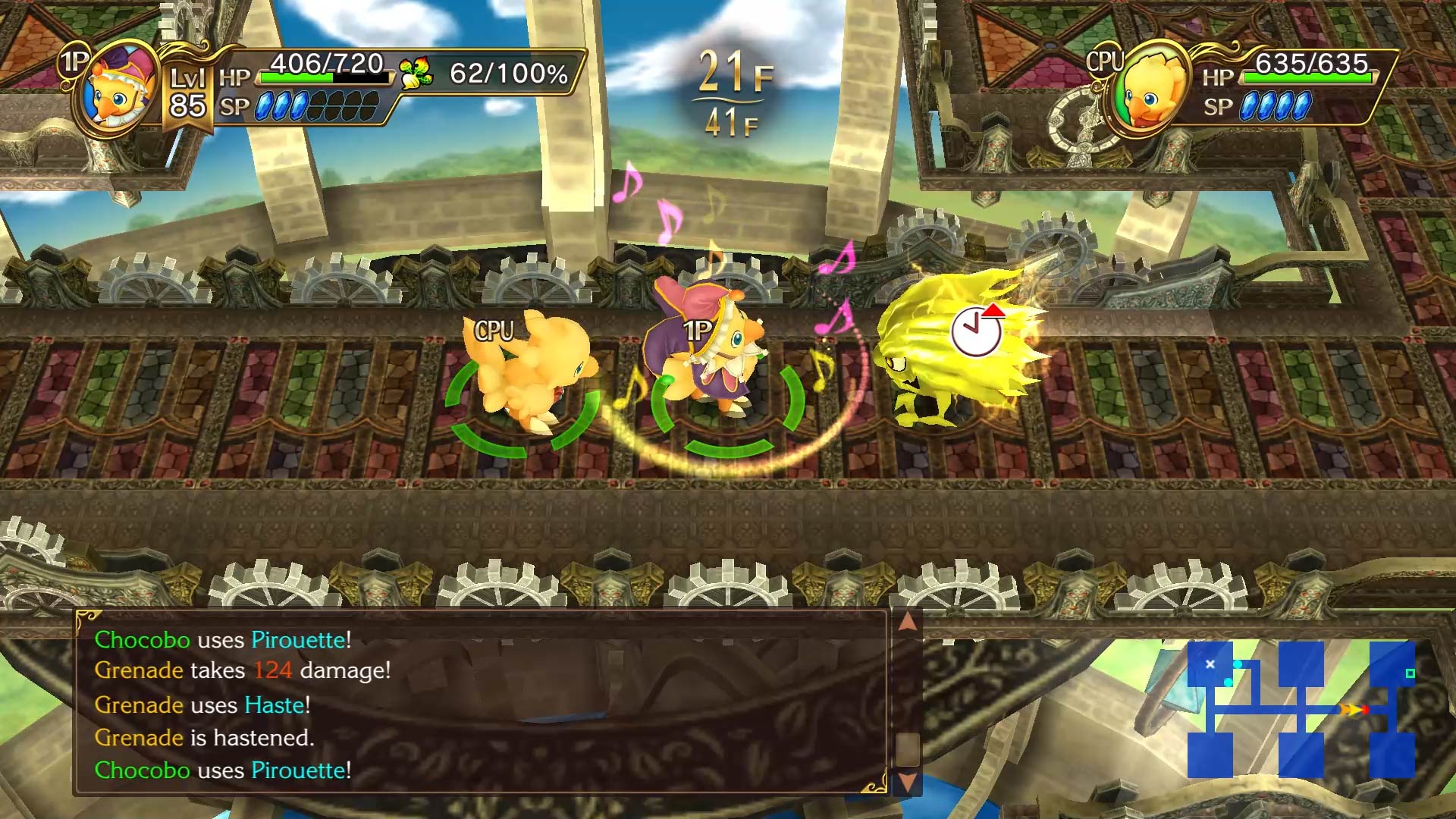 Unfortunately, not all is rainbows and puppies here. Progress can be slow thanks to the grindy nature of the game and getting your job class leveled up can be a chore. Without a range of activities to do outside of dungeon running, things get very repetitive very quickly.  That being said, if you’re a fan of the genre, you’ll be right at home here.

Chocobo Mystery Dungeon has all the makings of a good dungeon crawling RPG with the added bonus of allowing you to bring your friends along for the journey. While the co-op could use some tweaking, it’s still a good time. Because of the unforgiving and repetitive nature of the genre, this game won’t be for everyone, but for fans, Chocobo Mystery Dungeon has hours upon hours of content and is well worth the cost.

​Chocobo Mystery Dungeon is a second chance for those who didn’t play Final Fantasy Fables: Chocobo’s Dungeon to brave the depths of mystery dungeons–now with Buddies!