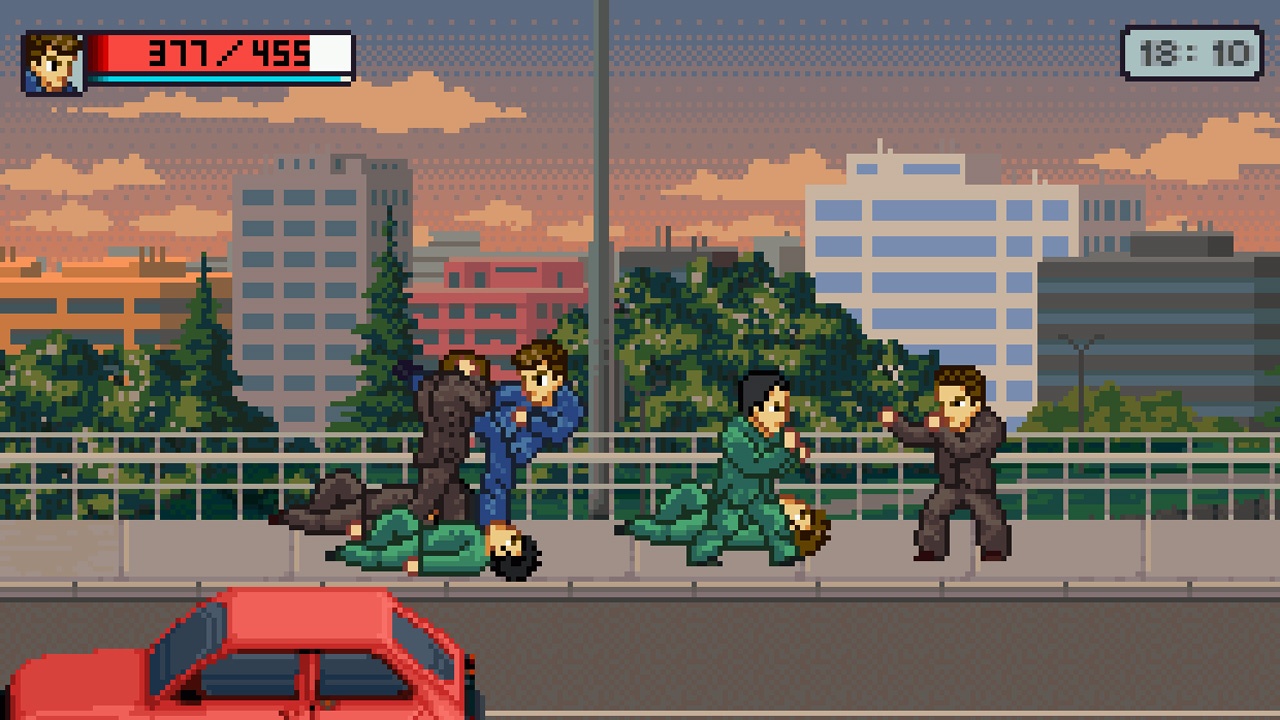 Who can remember the struggles of high school? There’s a certain lens that we view our adolescence through, and it’s one that either filters to rose or black. For many people, they have fond memories of their teenage years and what high school meant to them, as they had their friends, their clubs, their late nights and crazy parties, and I might be describing college for some but you get the gist. Then there are others that absolutely abhorred the experience, remembering feeling isolated and miserable, constantly at the whim and punishment of a ruling class and just counting the days till they were able to escape, one way or another. High school had a lot of ups and downs, but here’s the thing: almost everyone went through it. Around the world, in city after village after metropolis, high school was a place where we all had to flock, to be molded and informed, to conform or rebel, and to make a choice, ultimately, about what we would become. With that all in mind, let’s take a look at The Friends of Ringo Ishikawa.

Ringo Ishikawa is in his final year of high school, specifically in autumn, and he only has about six months until high school ends and the next leg of life begins. Ringo isn’t your typical boy: he’s an adamant delinquent, leader of a gang at school that is currently sitting at the top of the food chain as far as gangs go. He and his friends dream of getting recruited into the yakuza upon graduation, and, someday, becoming great gangsters in the heart of Japan. But, as our real story begins, the principal reminds Ringo of something: you’re smarter than you think you are. Ringo has potential and talent, as one doesn’t just get to be the leader of a gang through muscle alone. Ringo has to decide what he’ll become and how to do that, whether it be to attain the highest rank of fear and respect in the whole school, or to turn it around and try to become a scholar. Ringo isn’t alone, and his gang, his loyal friends, will be there every step of the way. The path isn’t easy, but Ringo has a future: just what it’ll be is up to him. 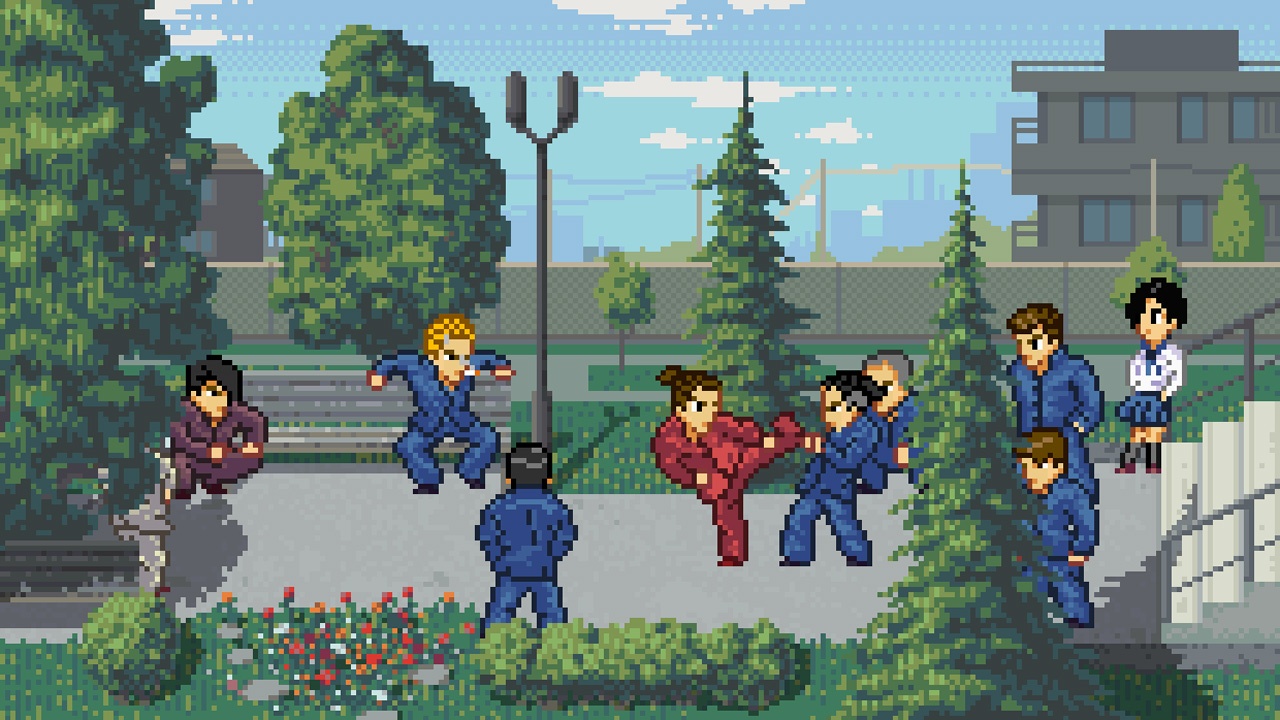 There’s no easy way to approach this game. The Friends of Ringo Ishikawa drops you into the game in the middle of a fight on a train, and you need to figure out FAST that the only way out of this brawl is to be the winner. After that, you need to see what Ringo is capable of. For a short period of time, the game is simply a 2D beat-em-up as you and your friends gather together, encounter other gangs, and simply rage on each other until the opening title appears. After that…well, after that, it’s up to you. The game is very, very open world, with suggestions and ideas about what you need to do to move along the story, but the way that you do that is entirely up to you. You can explore your school, your home, the town around you, the tall grass and graffiti emblazoned train tracks, and any number of other places. Sometimes you travel alone, and, others, you walk with one or more of your friends. Ringo has a lot to see and a lot to do, and a shockingly short amount of time to get there.

Presented in an homage style to the Kunio-kun games, it’s easy to misconstrue how detailed and in-depth this game becomes.  You punch a lot of folk, true, but you can improve yourself, work out, get your technique up and learn new skills, new abilities, become a real fighter. But you can also study, making sure you hit the books regularly and improving your grades in all fields. You want to be a badass, yet you have the intellect to know that certain activities can help you on the sly. Winning awards for your services might convince the principal to use the gym whenever you want so you can really get buff and majestic. Build some relationships, ruin others…it’s a lot of decisions and ideas that, despite being through the view of a potentially criminal mind, feels oddly familiar and has a bit of truth to it. Remember that a lot of the gangs that exist in the East and the West are built as sort of a familial extension. It only makes sense that Ringo and his gang build to be more like brothers than just acquaintances.

One of the things you might see and hear about this game is the fact that it drops you in with little to no preamble and very, very little direction. And it’s true. There are moments when you see something and wonder how important or not important it is, like, for example, eating. You might not even realize it’s a big deal until it suddenly becomes a HUGE issue, and then you need to figure out where to get food and how much to eat and what’s alright for you to eat. You struggle to understand how you’re going to get money to buy things until you realize you have the ability to loot people who you beat up, and then that raises the moral question of “what kind of person am I who robs people for pocket change?” It might fly in the face of what you’re seeking to accomplish for Ringo outside of the world of “future yakuza” but only if you embrace what truly could be or might not be. Then again…it might already be too late. 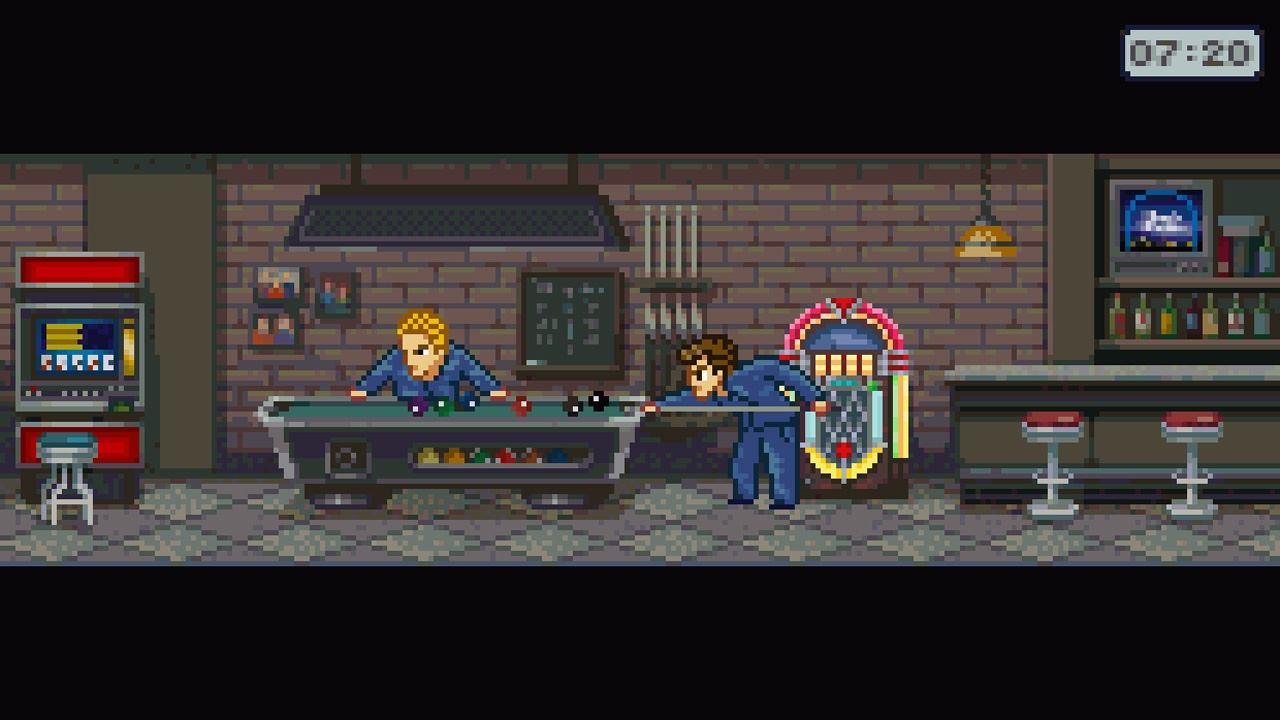 What really sticks with me about The Friends of Ringo Ishikawa is what the game means in terms of presentation. However frustrating it must be to get into this game and have no idea what direction you’re supposed to go, it’s a perfect representation of what that period of life is like. You have your ideas, your own supposed goals, but everything changes everyday. What was cool yesterday is downright gross tomorrow. You want to try and appease everyone, even though you say that you don’t care and want to just do right for yourself. Even if you’re sincere and want to carve your own path, how the hell do you do it? Is there really a right or wrong way to do something, or is everything just subjective and, ultimately, meaningless in the face of how the die was cast before you could even being to plan? There’s a certain amount of existentialism in this game, and it feels very intentional and morose. The developer’s take on refusing to divulge additional information or hints on how to do things seems like the right take not only on how to experience the game, but a further facet of the life that you play within the world. That feeling that someone might have all the answers and, for whatever reason, they aren’t telling you. Perfect.

I won’t pretend that The Friends of Ringo Ishikawa is a perfect game. It tells a fascinating story, but the dialogue fluctuates between compelling and natural to a bit dramatic and stereotypical. The controls can be frustrating for new players to pick up on, and they only get more complicated as your character evolves. Frankly, the ending of the game, which I’ve come to realize is the ONLY ending, speaks volumes about the nature of certain things in this world, especially in the world of the youth of today and certain cycles of ideology. But that ending does feel extremely apt, and it brings everything around to the true state of Ringo’s life. It’s a strange journey. It’s a long one. And it can be downright disheartening. Yet…it’s a beautiful tale, and one that deserves more exposure and more people to hear it. It launches on the Switch at the same price as Steam, and you might as well bring the game along with you. It’ll make sure that you, at least, remain a Friend of Ringo Ishikawa.

The friends of Ringo Ishikawa Review

The Friends of Ringo Ishikawa: because we all need a reminder that life in high school was a convoluted mess, no matter what we tried to do right.