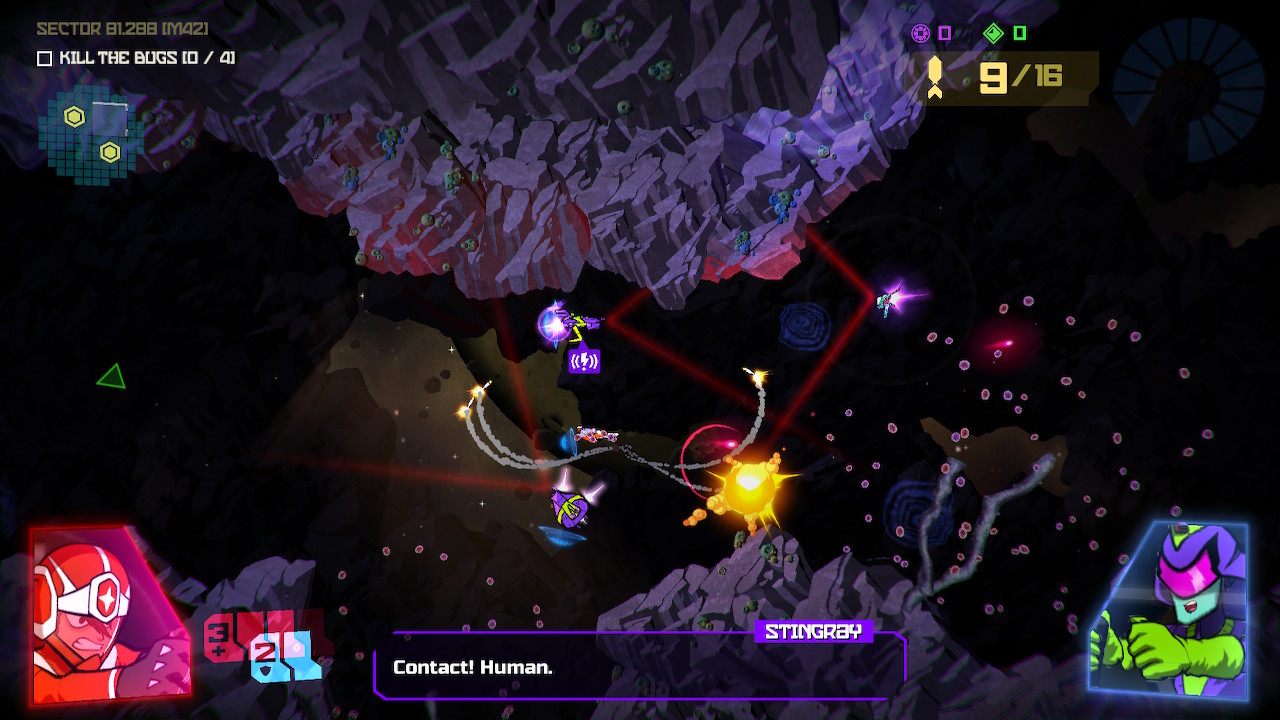 It takes a special blend to make a proper homage to something without it becoming a pastiche or a parody (or just a ripoff). You need to have enough of a nod and a wink that everyone can guess what you’re alluding to without outright saying it, but you also need to provide enough original backbone that we don’t just say “Oh, it’s REDACTED with a fresh coat of paint.” I think there was a bit of confusion when the Five Nights at Freddy’s “fan games” started cropping up and they were mostly just the same exact model with different characters, but that’s not the point. When 17 bit set out to make a massively ambitious title that was equal parts R-Type, MUSHA, Macross and Gundam, they wanted to capture both the gameplay spirit as well as the tropes and storylines that existed therein. The success was apparent, and, now, they bring the definitive edition of their game to the Nintendo Switch with Galak-Z: The Void: Deluxe Edition.

Before we can even get into the storyline, it should be noted that Galak-Z has gone through several upgrades and iterations before arriving on the Switch and, as such, has kind of a diverse set of options for gameplay. For example, the Arcade mode is probably the best place to start, even though the Rogue mode is specifically touted as the way to go for the “true” Galak-Z experience. The Void mode isn’t even unlocked from the very beginning, and you’ll need to fight for a seriously long time to unlock it (unless you’re a seasoned Galak-Z vet and you’re just transitioning to Switch, at which point it shouldn’t take too much).  Each of these modes is different enough that they deserve to be tried in turn, because the approach to the game changes drastically with every iteration. Still, the core mechanics stay the same, though how they become utilized is a whole new approach. 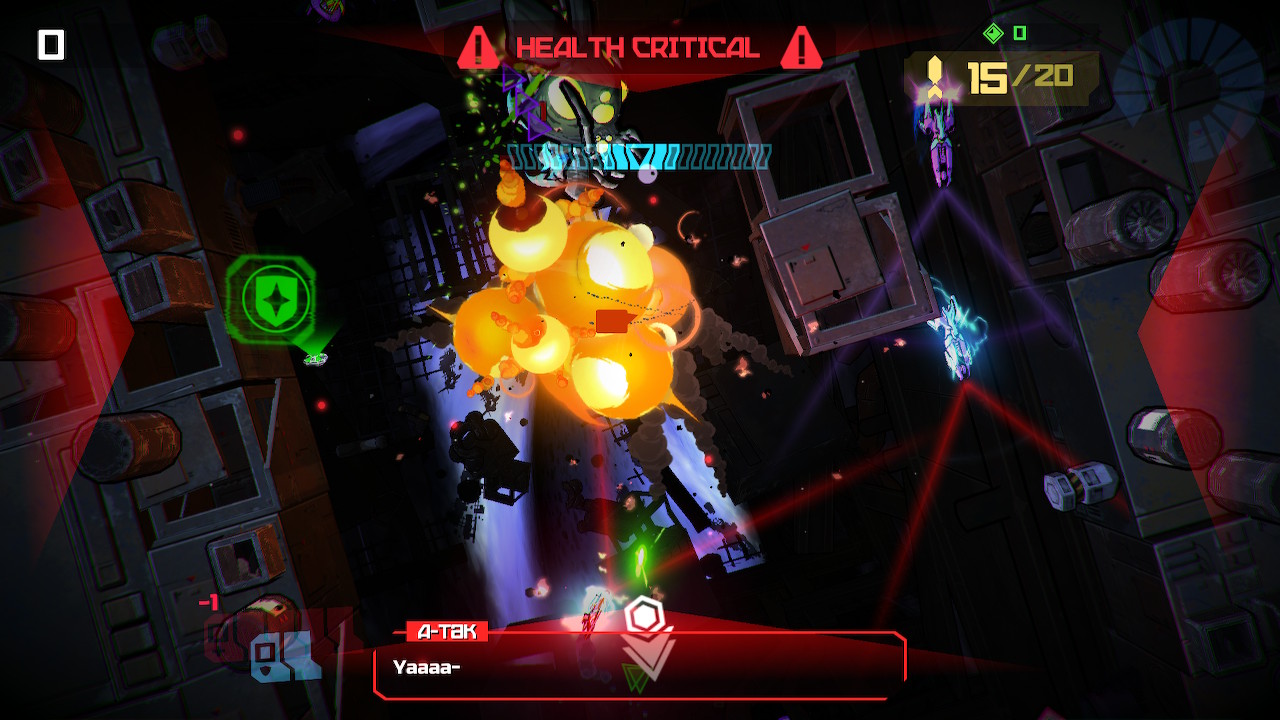 But I digress: the key storyline is that you are A-Tak, lone pilot who is the sole survivor of a massive raid from the evil Baron and his galactic, oppressive empire, the Imperials. You are trying to get your revenge as well as keep the crew you stumble across on, the massive, Yamato-inspired Axelios. The ship’s commander, Beam, designates you to go on various missions, starting with rescue and salvage and, eventually, working up to some real revenge and assault missions, trying to strike at the heart of the Imperials and make Baron pay for killing everyone else in the squadrons. The arcade mode does a lovely job of painting a pretty good picture of what you need to do and giving you incentive in terms of storyline, so, if that’s something that you need to compel you, stick to Arcade till you finish all four seasons of the storyline. If you’re more of a “I like blowing stuff up with minimal reasons” kind of person, then Rogue might be alright.

Galak-Z has two different fight patterns, and you’ll spend a fair amount of time in both. As a free form sort of shmup, you need to navigate through surprisingly big stages to reach your objectives, rocketing through asteroid fields, dangerous space plants, hostile ship innards and generally bad places to be. In theory, you only need to get to the point that’s indicated on the map with a big white arrow, do that, and then get the hell out so Beam can get a warp point open and you can move on. However, exploration of the stage leads to finding more blueprints and upgrades for your ship, and then the proper amount of scrap metal from blown up ships to pay off the mechanic (Crash) to install the upgrades. Enemies are hilariously voiced and given real personalities, so you can hear them as you jet about space, trying to sneak up on them or sneak past them in order to get to your next objective. You may want to try and stay focused at first so you can simply unlock more stuff, but there’s no trophy for being first: take your time and find everything that levels have to offer, especially in Rogue mode where you don’t have the luxury of saving between chapters, only full seasons.

There’s something very cool about when you finally can transition your ship from a normal shooter pilot to a full on space mech, complete with laser sword and wings, that makes the game exciting in that aspect. The combat of the entire thing changes, shifting you from defensive dogfighter with a perchance to flee to a bonafide anime hero, screaming lines and hurling yourself down the enemy’s throat. Galak-Z really wants you to experience the full spectrum of what it means to be a protagonist in a space opera, even if the plot gets dropped and becomes downright insane at points, but that’s not really a problem. You learn to shoot, snipe, dodge, strafe, and you’d better get damn good at leapfrogging over bullets in order to stay alive and let your shields recharge. When the combat clicks and you have the Imperials fighting with the Bugs or Void Raiders while you just hover quietly out of detection, you can swoop in, pick off the last few and then collect a ton of scrap for upgrades. It’s not meant to sound exclusively like a “best case scenario” sort of deal, but that’s what makes Galak-Z shine is the perfect culmination of what the game wants to do and what it successfully does. 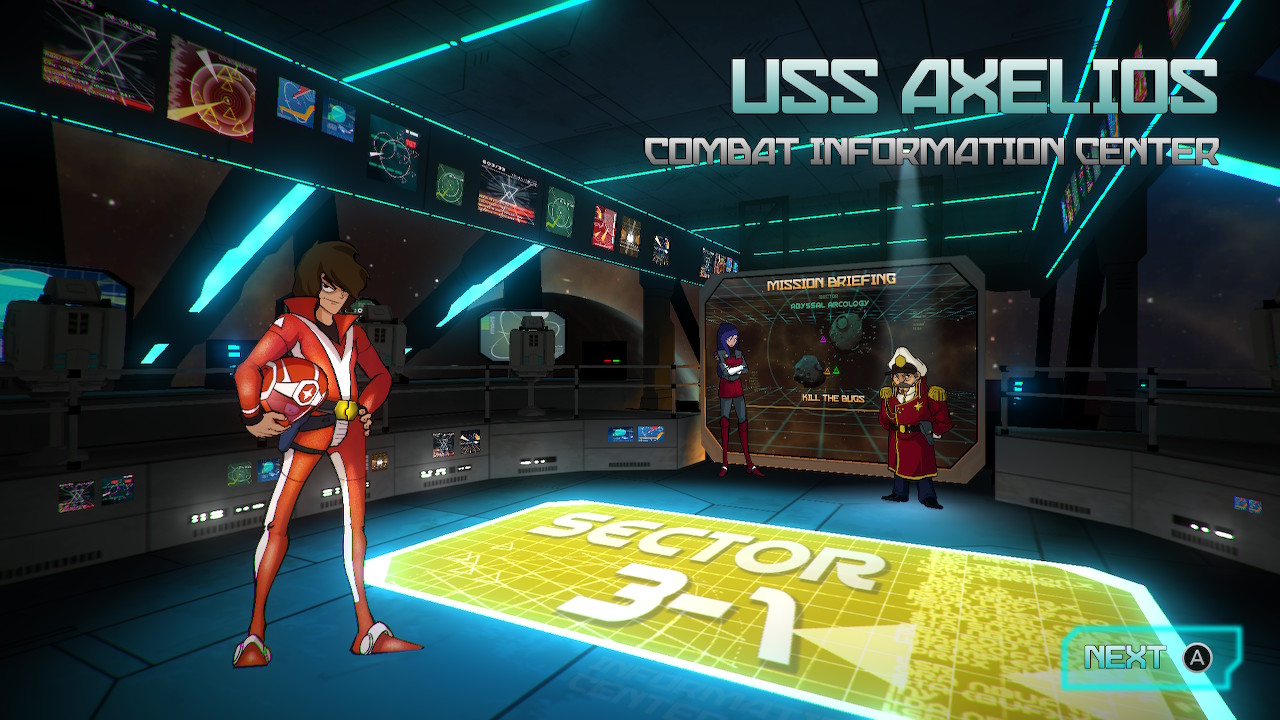 However, in order to get there, you need to subject your hands to some pretty harsh punishment, and that’s where I take a bit of umbrage with Galak-Z. While the number of buttons you need to press isn’t too unreasonable and all the options lay themselves out neatly, executing a good flight often results in serious hand cramping. To move, strafe, boost and stop, you need to keep all four shoulder buttons handy and dancing in sequence. Then you’re probably going to want to hit things, which is a different button, unless you want missiles, which is a different button again, and you’ll 100% need to jump over laser fire, which, surprise, is a third button. It sucks just a little because this game is clearly designed for long play, not short bouts, but goddamn does my hand hurt after doing a single season of the game, much less a full Rogue playthrough or even 20 minutes in the Void. Maybe it works better on other consoles with the ability to remap buttons, but JoyCons aren’t the best fit (though the HD Rumble is beautifully implemented).

Galak-Z: The Void: Deluxe Edition is gorgeously presented, with really great animation and form, solid voice acting, a dramatic soundscape and plenty of excitement on-screen to watch. The loyal following for this game means that players who have invested time in the mobile variant for their phones should definitely move over to the Switch for their daily driver, and there’ll probably be quite a few. New players, though, are going to feel that the setup is rather daunting, and it’s slightly disappointing that you need to work to unlock the brand new Void mode that’s specifically in the title of the game. I’m sure it’s to keep players from falling into a game mode that’s been viewed as too difficult, but, since it’s not really a spoiler to see what happens therein (more like an alternate universe, in my opinion), I would have liked that there from the very beginning. Still, it’s fun, it’s interesting, and I plan to play a lot more once I find the right 3rd party controller that lets me juke without getting a cramp.

A game that’s so joyful in presentation and concept but slightly painful in player execution, Galak-Z is sure to be treasured by long time fans.