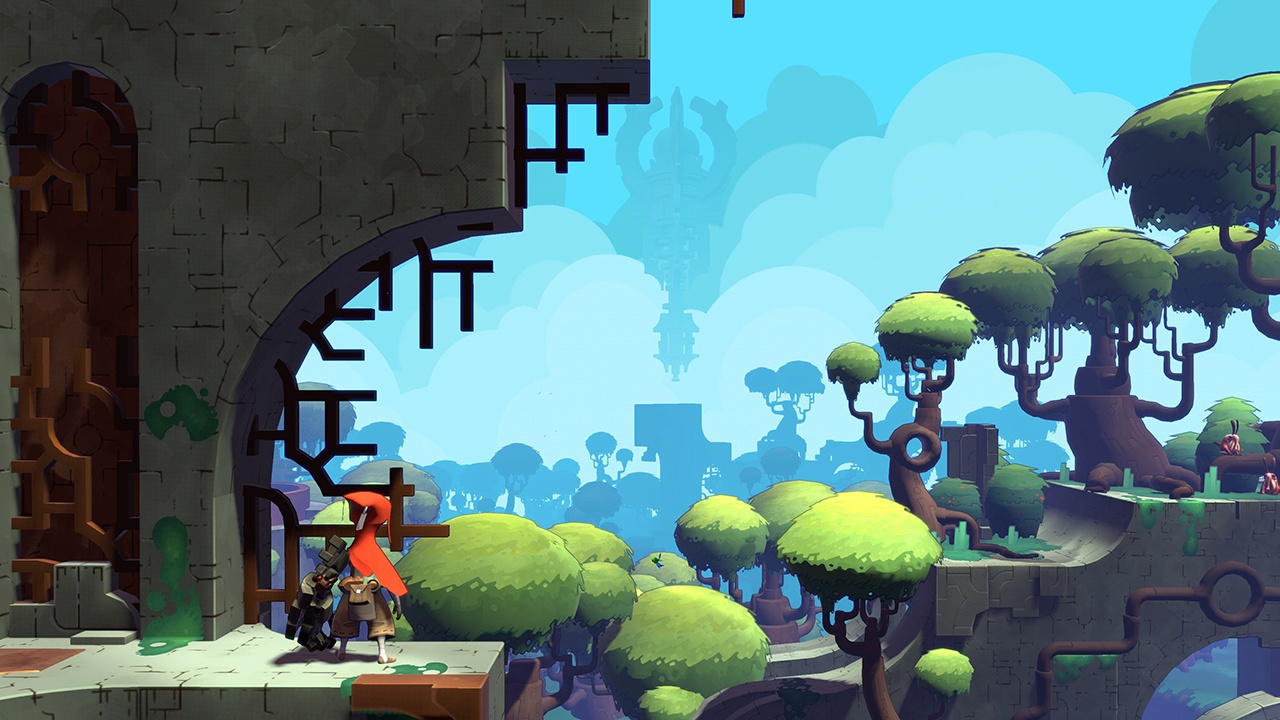 Quick, tell me the story of Metal Gear Solid in two pages or less. You could probably do it, but either the font would be size four or you’d be truncating so much that you’d totally skimp on entire chapters of the saga of Solid Snake. Games have massive storylines, and that’s been a wonderful revelation for those of us from the generation of “see that block? Eat that block. That’s all.” Yet, at times, we get bogged down in words, and we have to be reminded that it’s also acceptable to show, not tell, your game. I’m not sure what it is that inspired the sadly now defunct Runic Games (creators of the Torchlight series) to bring us the action/adventure of Hob, but we’re here now on the Switch with Hob: The Definitive Edition, ported by Panic Button and published by Perfect World.

There is a story here, but you aren’t going to get it in words or even real pictures. From what I can tell, I think Hob is the name of our little character who is freed from a prison-like home at the very start of the game by a Laputa-inspired robot, and things just go from there. Hob follows the robot around until a poisonous plant fungus attacks Hob and makes the robot cut off Hob’s arm to save him from succumbing to the venom. The robot, being the best new friend ever, takes Hob somewhere and gives Hob his own damn arm. Hob is admittedly confused when he wakes up, but finds out fast that the arm is awesome and does a lot of cool things, like punch through walls and activate steampunk machinery. The robot sort of indicates to Hob that there’s something messed up going on in this planet (the twisted, dark architecture scraping against the sky ominously fits the bill) and Hob, bearing a freaking robot arm and a sword he smelted himself, decides to go do something about it. This is all conveyed through watching and piecing together details with zero dialogue or written text to confirm this. Think Hyper Light Drifter in terms of “figure this out yourself.” 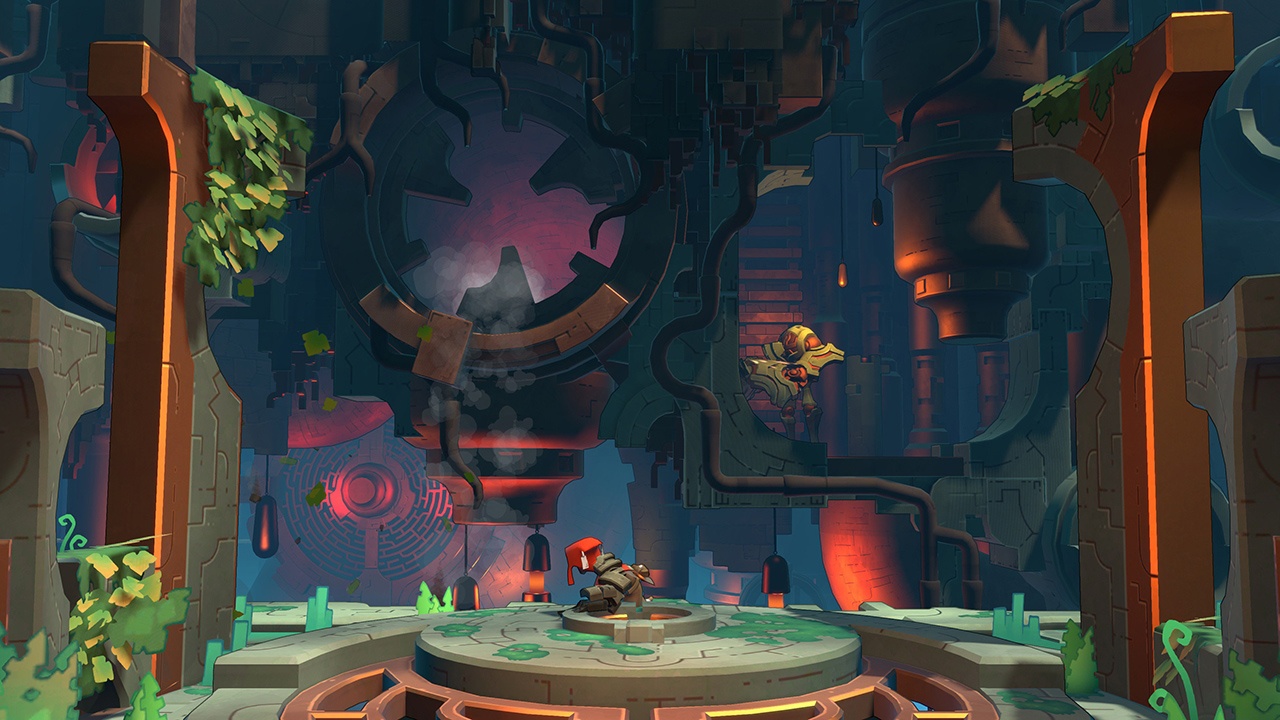 The crazy part about Hob is that, once the game gets going, it simply goes, and you just need to run alongside it. You have a map that isn’t really detailed with anything except your next suggested objective, a general understanding of what to kill and what not to, and a plan to save the planet even though you’re not sure quite how to do that. Hob can walk, sprint, roll dodge, hit things with a sword, jump and hit things, and, over the course of time, do some sweet moves and actions with your massive glove. Additionally, there is an upgrade system that is totally and completely optional: you can, theoretically, go through the whole game, from start to finish, as you are, and still beat the game. However, the upgrades, which are scattered throughout the world in small, hidden pockets, do make the game more enjoyable and, in some instances, easier. A very early upgrade is the ability to activate a temporary shield to ward off certain projectile attacks, which can be a make or break as you get your bearing on the control setup, which does take just a bit of getting used to. I spent a good amount of time trying to make myself okay with just walking at normal pace because the sprint button was making my finger tired.

For those unaware, Hob (non definitive edition) was originally a next generation console title, and had a lot of horsepower behind it to properly render the game and give life to Runic Game’s vision. Panic Button, who’ve become the pseudo wizards of the Switch, did a very good job of porting it, but players should still be sure to trim their ambitions before coming into the game. If you’ve seen how Hob looks on, say, a PS4, you might be a little disappointed by the use of cell shading and a more angular approach in order to make the game work smoothly on the Switch. Don’t get me wrong, it still looks great, and the moments when you unlock memorial snapshots of Hob’s adventures can still stun you into your seat with the overarching appearance. The truth is, it simply isn’t as pretty as the original incarnation, and, unlike titles like Doom or Wolfenstein, players could potentially take umbrage with this. Especially when the decrease in graphics doesn’t totally make for a perfectly smooth experience, as there were a few moments where I noticed the game lag just a little, consistently, in the same spots (though arguably for just a moment).

There is a lot that Hob: Definitive Edition does right that kept me coming back time after time. Firstly, the combat of the game is fun and engaging. You learn to get great at dodge rolling, blocking, swinging a sword or even landing a powered up robo punch in order to keep yourself alive. There’s never a moment where you feel overwhelmed, but things are also never so relaxed that you doze off in the middle of exploration. The game has excellent pacing in terms of offering opportunities to fight or flee, to prove your mettle or simply allow you to exist. You’ll easily get wrapped up in the wordless quest of Hob, and, with the map to help guide you around, you won’t get as lost as you could. 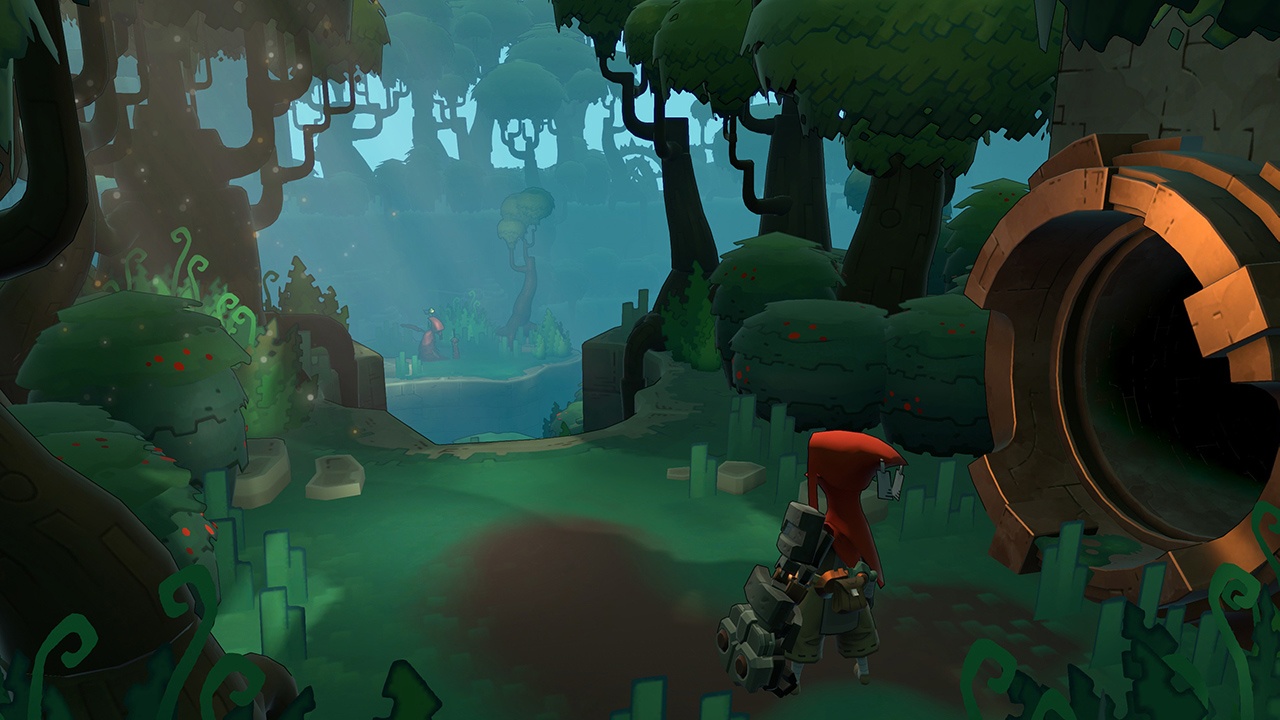 Then again, there were times where the lack of exposition sometimes left me a bit brain dead as to what I was supposed to be doing. Since my first quest was simply a “red dot on the map,” I went to a place and just kept doing things, like activating mystical power pillars and moving around cool UFO-like obelisks until I couldn’t do more things. At one point, I made some really cool looking lightning happen in the background, and I was like “oh, that’s awesome, I wonder where the boss of this area is.” Turns out there wasn’t a boss, that was all I had to do, and I didn’t realize I should pack up my stuff and move on until I arbitrarily checked the map and, behold, my new mission objective is over there. Players who aren’t ready to basically check in periodically to see if the game’s changed its stance might get frustrated. Additionally, the lack of a soundtrack helps to accentuate some things and diminish others. Small swells of errant music and focus on sound effects helps to paint a great picture of being the sole hero on a mission, but it also can leave you with moments of “wait, really?” as a result.

Still, Hob captivated me, and I think that’s an important element to any game, especially one that will ask so much of your time and patience. This wasn’t something where I just listened to what I had to do and did it; I looked around, explored, and had a great time ferreting out hidden treasures and additional photo spots. I think the game looks great overall, and the charm of Hob and his world still ring true, especially now that the world can travel with you. It looks good on the Switch’s mobile screen (better than my television, surprisingly) and the performance is solid, and, hey, it’s Runic Games. If you want to tide yourself over before Link’s Awakening with a brand new adventure that poses similar mechanics (and a whole lot of monster blood), then you should embark on a quest with Hob and see what the future holds.

The journey of a lifetime is full of wonder and sights, no words, and a surprisingly solid Switch port.