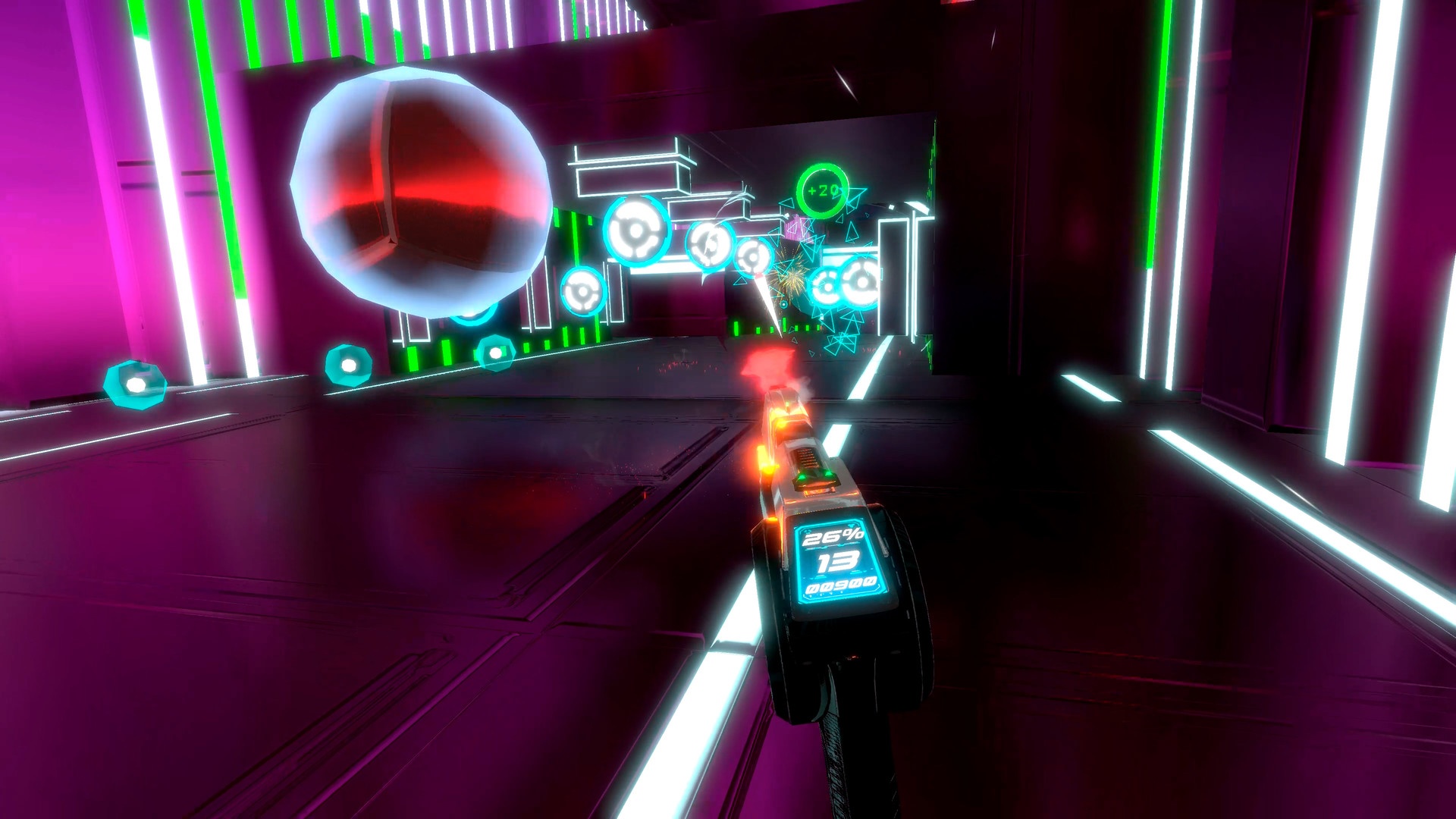 Let us start with what Beat Blaster is, besides being a fun game. Beat Blaster is a game where you travel through the level trying to dodge being shot and weave around obstacles; all while trying to earn as many points as possible. All this, while you get to listen to some decent music which can react to the speed in which you are travelling through the level. If you slow down too much, then the music will start to slow down and stop. You are thrown into the game after selecting your preferred control option, with no instructions, or even that much in the way of options.

The game has 30 levels… well personally, I would say it has more, a lot more. You see, here is the thing about the game, every time you die the level changes. They are randomly generated. I would say consider the 30 levels more as the level of challenge possibly. Every new level has something new added or adjusted it seems, from cannons appearing on the walls, mines floating around to boost pads on the floor that you may have to fight against depending on the direction and more.

Here is the thing, this is one of those double edge sword moments. On one side, this gives the game plenty of re-playability. On the other side, however, it means that you are unable to get use to a level and learn how to beat it, or even complete it with the highest score possible. The best way to approach it is to not learn the level, but figure out the obstacles that appear in the level. Despite failing levels near the end, I have yet to get mad knowing that now I have to start again on a new level layout or anything like that.

With things being randomly generated for the levels it can, and has on times, produced some amazing moments of having weave in and out, dodge and shoot things with in a short space of time. It has also produced those moments where you will be nervous of in games like this… the moments where there is nothing you can do to avoid something and end up getting hit and have to restart the level.

The game only has two guns in which to select from, double handguns, or what looks like a sub machine gun. Both come with unlimited ammo. You won’t be allowed, however, to just hold down the fire button as you go through the level, as the guns can overheat and not fire for a couple of seconds.  I would have liked it if there was maybe some more weapons to choose from. It may help create new challenges. You may also fail to notice that things can tend to move to the beat of the music. 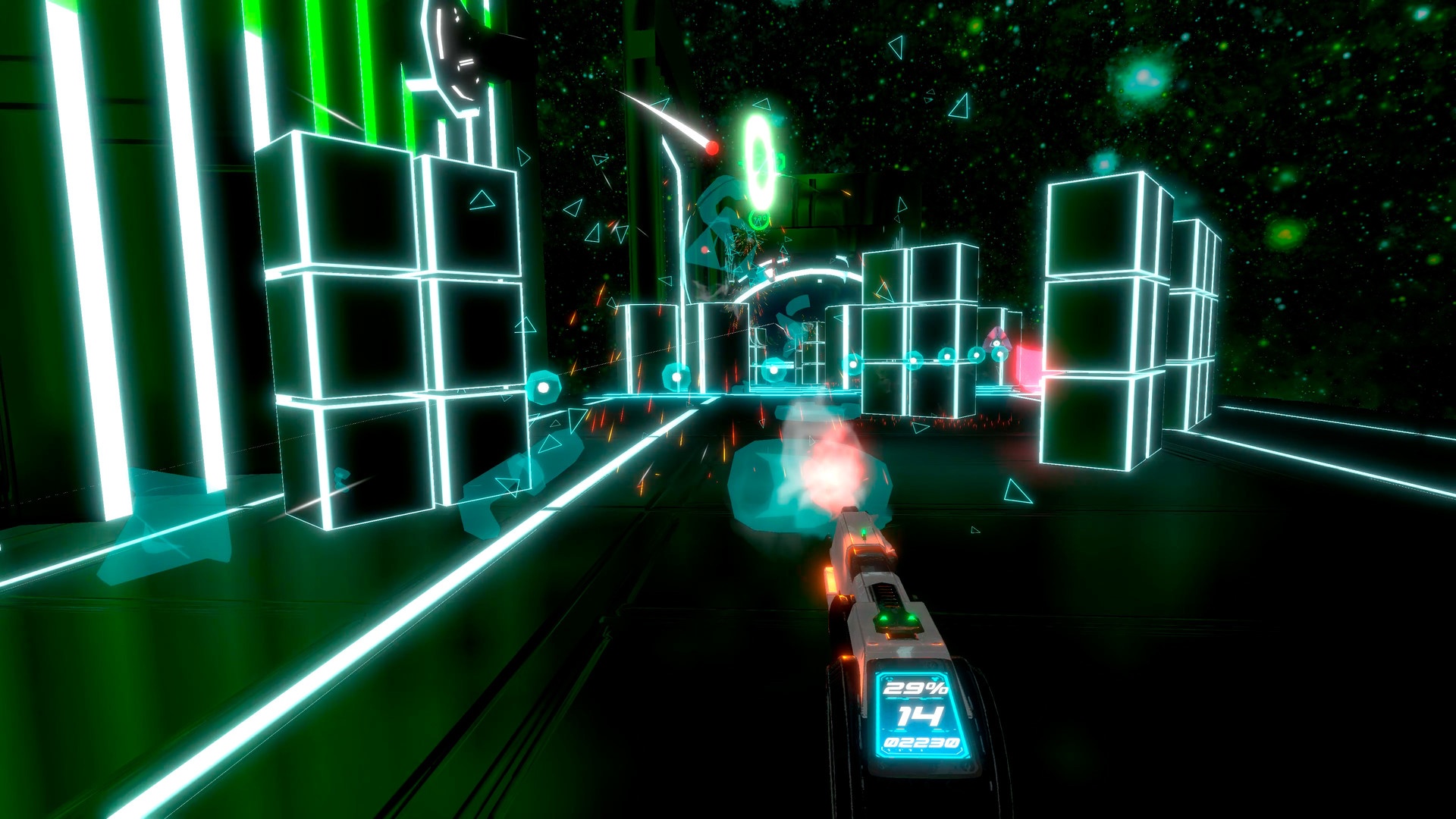 In terms of movement, well you never really stop as you are travelling along the path towards the end of the level. You have a couple of options when it comes to how you wish to move left or right. Using the headset to move you are able to select from the “move” option or the “tilt”. I use the move option, it’s the free movement option moving your head left to right to dodgy things, or tilting your head forward to speed up or tilt back to slow down. The tilt option is where you would make a quick tilt in the direction which you want to move.

I will say if you are using the “move” option like I do, then it is best to also make sure that you are back in the position that is comfortable. I have start a couple of times quickly after dying while still leaning forward, and the game has declared this the position for an average movement. Meaning that I had to lean forward even more in order to move faster. 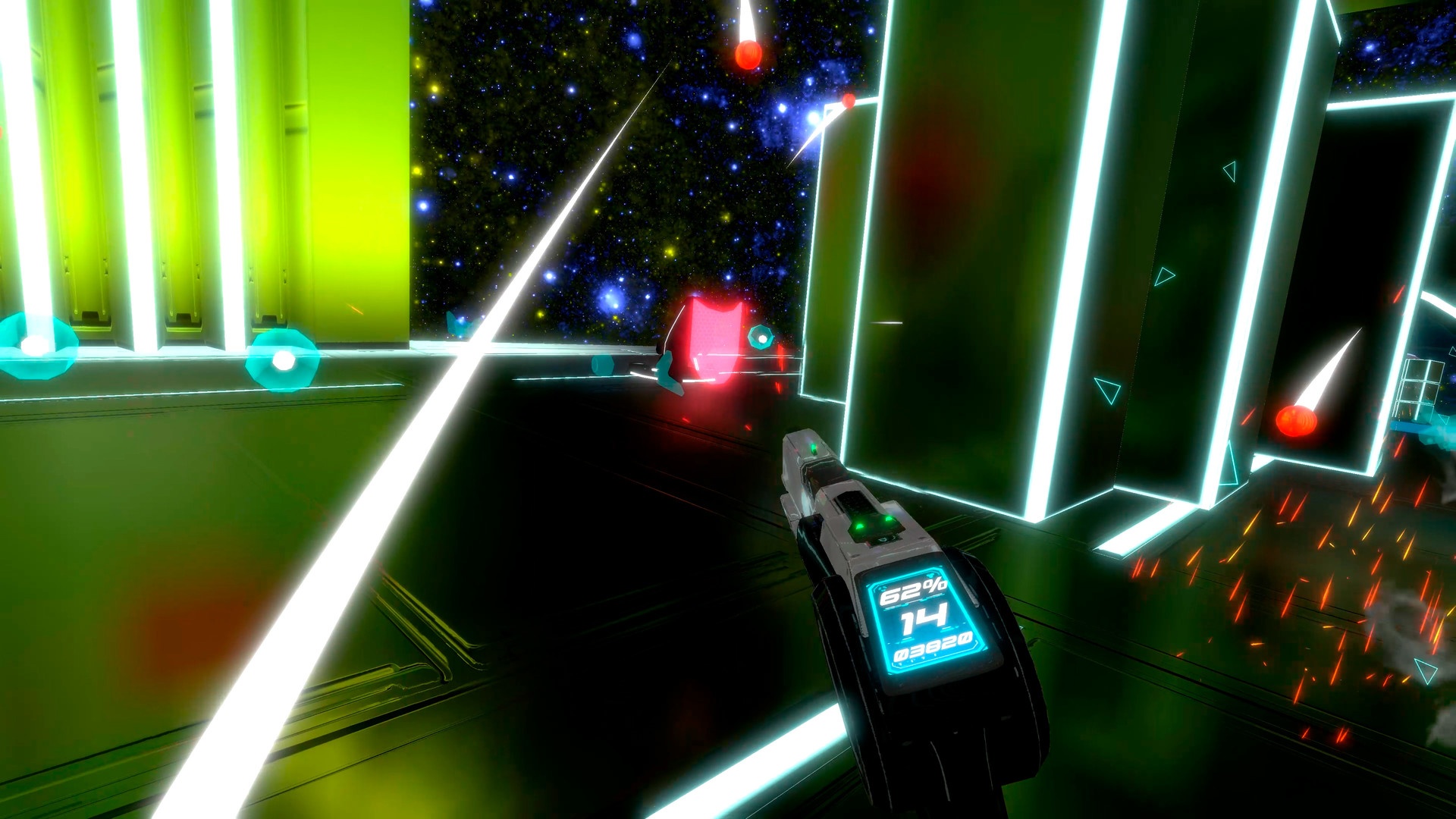 Beat Blaster’s soundtrack is great, each level having its own that plays, and they have always seemed to make to want to go faster through the level. There will be times that maybe you are focusing a little too much to truly notice which can be a shame. One thing that I think might be a nice little thing to have is the ability to select the kind of music that is played while you are playing orr even being able to use your own music, so you can overcome each level to your favourite songs and seeing how the level reacts and moves to the beat of your music.

This is an amazing game, that offers a nice challenge from level to level as you try to move up the leader boards; all with a nice soundtrack to accompany it and with the randomly generated levels offering plenty of re-playability to be had. It would be nice to be able to add your own tracks or select the genre of music maybe.

Again the randomly generated levels can be both a positive and negative depending on if you’re in the mood to just beat a level and get to the next level, with not being able to get use to the level.

For all you trophy hunters out there as well, all you need to do to get the platinum is beat all 30 levels and it’s yours. With 23 levels down, I am eyeing it up as platinum number 51 for myself.

Beat Blaster is a game where you travel through the level trying to dodge being shot and weave around obstacles; all while trying to earn as many points as possible.