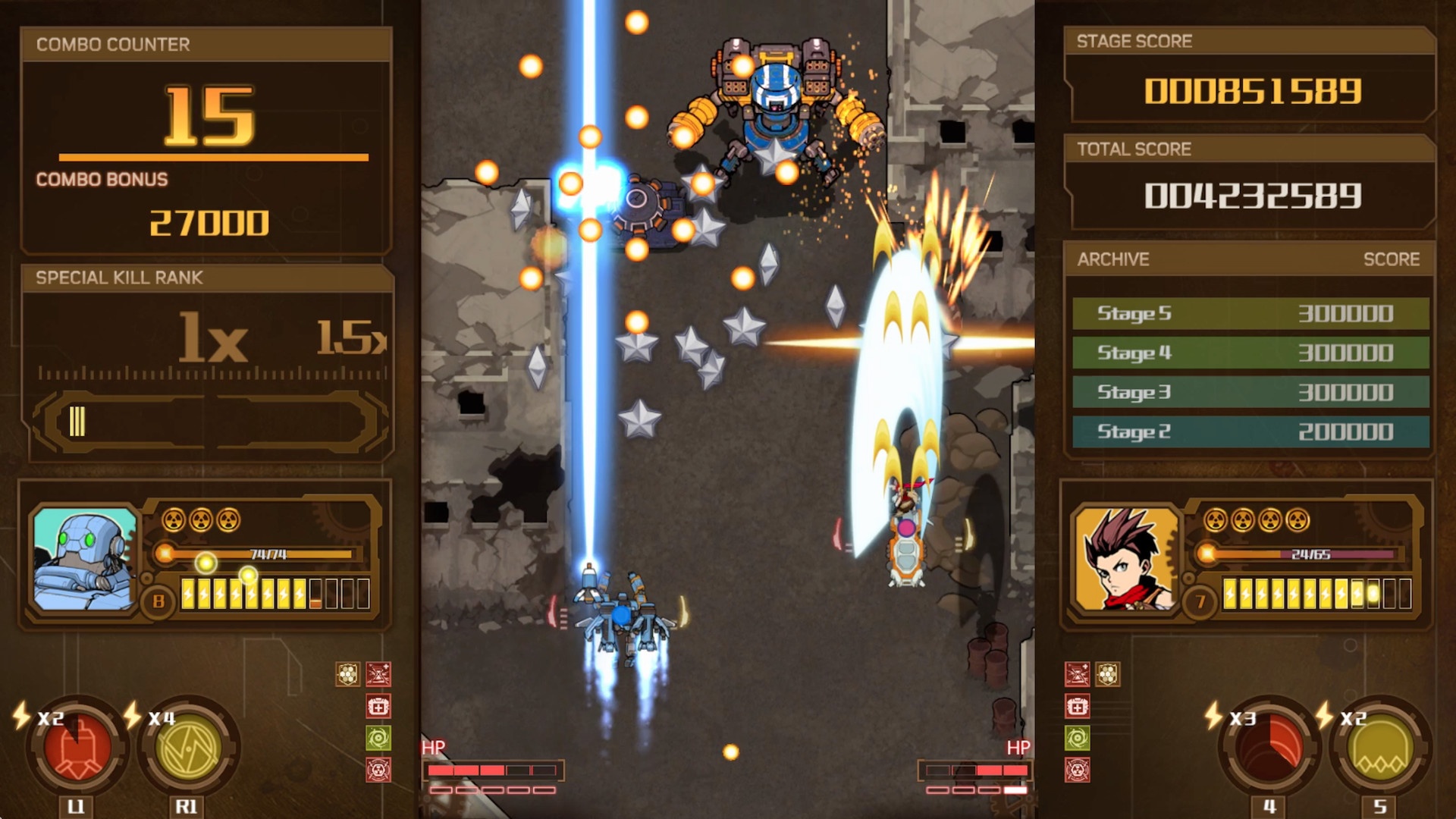 If there’s one genre that’s done to do death across the indie circuit, it’s on-the-rail shooters. It’s a formula that’s easy to replicate, but difficult to make distinguishable in a sea of carbon copies. AngerForce does enough to keep itself from being diminished by the many similar titles, but still not enough to make it stand out in an often bloated genre, making it viable, even if it isn’t vital.

You can expect a similar experience from AngerForce as that garnered from shoot-em-ups, with the typical run and gun ethics remaining at the forefront of your adventure. As you progress through each level you face hoards of enemies, which you mow down with an arsenal of weaponry as you slowly make your way across each map. While it’s an on the rails experience, you can zoom back and forth between enemy attacks, with sharp controls making it easy to dodge bullets on the fly.

You can choose form four heroes, all of which have different stats and abilities to make each journey feel unique. Each hero is equipped with a basic weapon, as well as an ultimate that’s charged as you attack, and two alternative abilities each. They vary from slowing down enemies with icy blasts to deadly electrifying walls that slowly creep across the screen, hurting every foe they come in contact with. Each hero has its own upgrade tree as well as a generic one, so there’s plenty of leeway with regards to making the adventure your own. 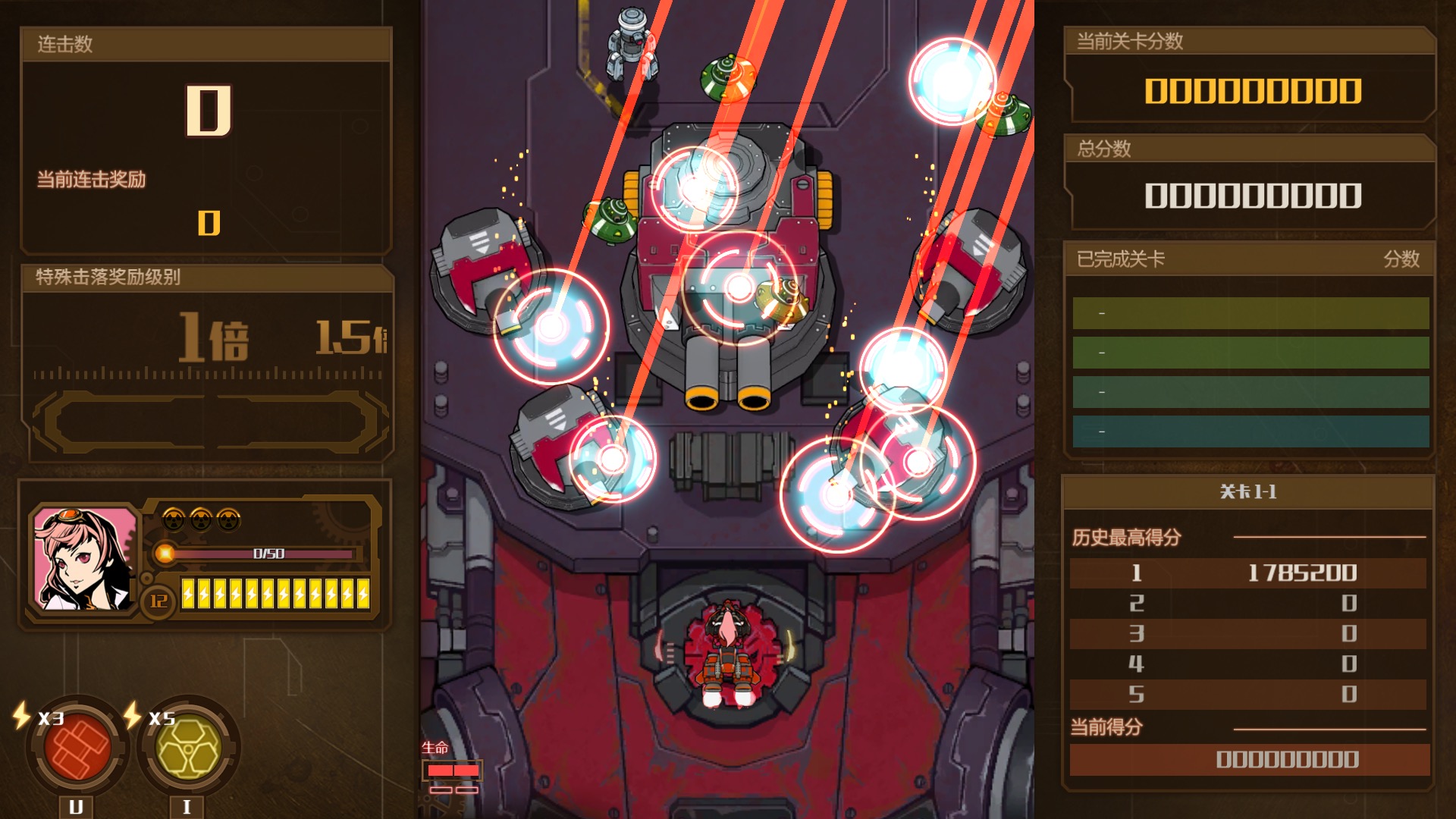 The character design is one of the best things that AngerForce has going for it. Both your heroes and enemies are well realized, giving Metal Slug vibes throughout, with its giant mechs and elaborate robots causing havoc across the ever-moving map. There’s a decent amount of variation with enemy attacks and abilities which keeps you on your toes when planning your attacks.

Obviously, the most interesting situations arise when facing bosses of which AngerForce has plenty. Mjd level bosses and end level bosses are often multi staged and tough to take down, but the main takeaway is they’re fun to fight and satisfying to defeat. It’s super enjoyable to work out an enemies attack pattern, dodge your way through their bullets and finally laying waste to them with your special attack you’ve been saving for that moment.

Testament to its visual polish, the whole thing looks pretty neat. The colour pallet compliments the vibrant character design and the maps are unique and sharp. The only criticism is that there just isn’t enough of it. While each level is different enough, there’s no more than a handful of environments to explore. It never really cashes in on some of its finer points, but for the small price point, I guess you get what you pay for, even if there isn’t a considerable amount of content to get your hands on.

That being said, there’s still a campaign mode and an arcade mode to get stuck into, even if they are made from the same cloth. Strangely, the amount of campaign levels differ depending on the difficulty, with the lowest rank only giving you three levels to play through. Basically, if you want more, you have to try your hand at the more punishing difficulty levels. Arcade mode however is your more typical run of the mill quest for a high score, with more of a no-risk feeling. There’s also a co-op mode if you fancy bringing a friend into bullet hell with you. 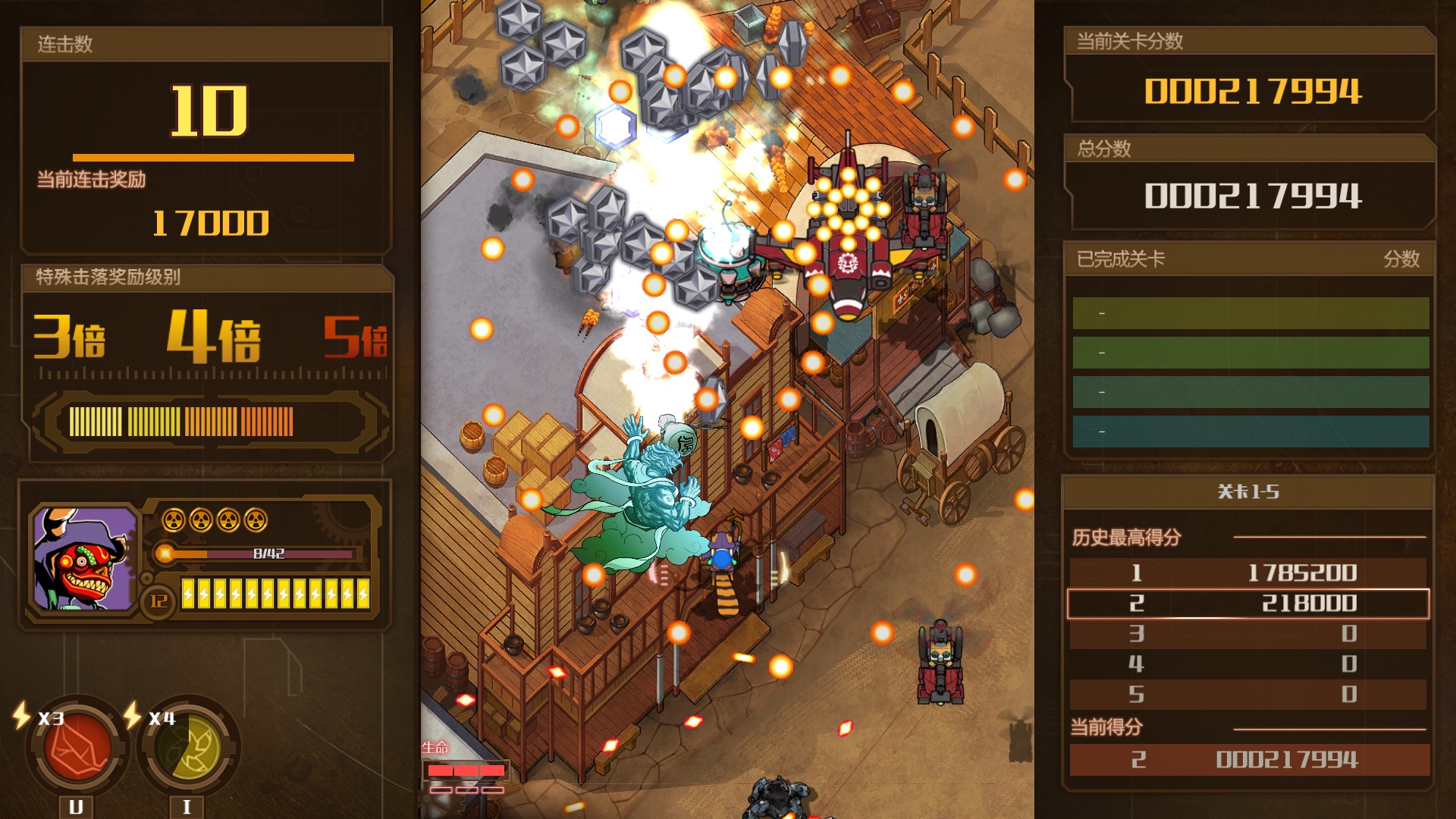 And while the campaign helps give the game some structure, one of the most confusing aspects of AngerForce is its pushy replay structure. The handful of levels in the campaign require you to repeat your actions over and over to successfully unlock the many add-ons and upgrades you can kit yourself out with. Granted, these upgrades are useful but the grind isn’t something you ever feel like you’re interested in doing.

The game plays better docked than it does in handheld mode, oddly choosing to squish the action on a thin rectangle that limits the visibility of your gaming. The rest of the screen is made up of stats and the like, which is fine but it feels like taking up so much screen space is a waste of potential environment. You can however rotate the screen, but it means you’re forced to try and balance the console precariously if you want to play the extra few millimetres gained from playing in portrait mode. Many of these issues are dispelled when played docked, but it’s not really made for handheld gaming. There’s also some distracting lag that causes massive issues when too many enemies appear on-screen. Its most noticeable when you kill a boss, filling the screen with your bounty that causes the game to nearly completely halt due to hideous lag.

AngerForce is polished fun that focuses on the wrong things to make it stand out. The gameplay mechanics are strong and it looks great, but the rinse-repeat workings of some of the titles better parts make it more of a chore than a focused shooter more often than not.

AngerForce is an enjoyable shooter, but one that doesn’t do enough to make itself vital in a bloated genre.