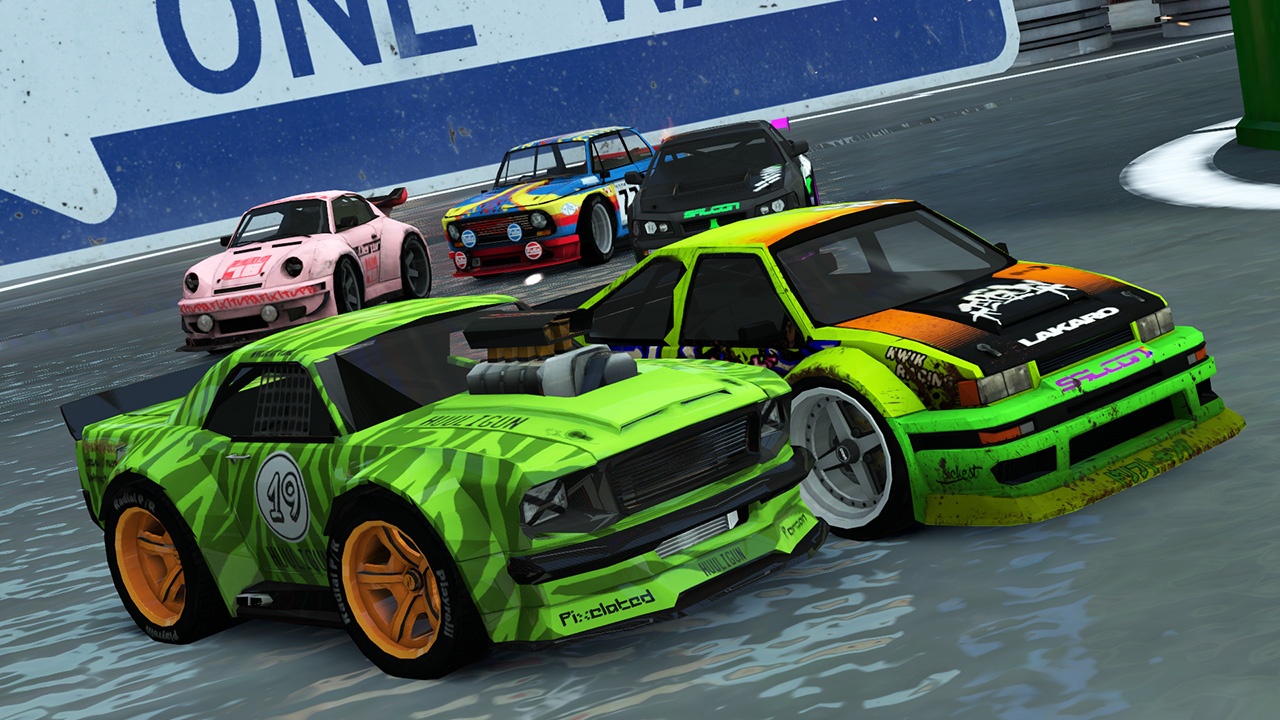 It’s probably correct to say that most boys grow up with many fond memories of playing with miniature vehicles. From the die-cast Corgi or Majorette ranges to Micro-Machines and even the slot-car varieties of Scalextric, each one has in one form or another played a part in the development of boys and their toys. In fact, it can’t be denied that for the majority of males, there is a close relationship between the testosterone-fuelled and the petroleum-fuelled. It’s a form of role-play that can easily carry over to adulthood, either within becoming a real racing driver, car mechanic or simply carrying on your childhood varieties through the form of digital media; namely video games that depict any form of vehicle racing.

As far as video-gaming goes, there’s a huge variety of different styles to suit any budding driver. These can range from top-down racing, realistic scenarios and the madcap mayhem of more cartoon-styled racers. The latest of such titles to drive a destination to the Nintendo Switch, comes in the form of Table Top Racing: World Tour – Nitro Edition; a game that has seen previous releases on various platforms in the past, but this new edition hosts a few exciting new features, making it the most definitive version of the game to date. As the title implies, Table Top Racing: World Tour – Nitro Edition revolves around a series of races using miniature vehicles across a variety of tracks that mimics playing with toy cars as a child; albeit one that contains a few more bells and whistles than just simply using your own imagination.

Developed and published through Playrise Digital and Greenlight Games, Table Top Racing: World Tour – Nitro Edition boasts an impressive roster of sixteen miniature vehicles, more than thirty different tracks and over one-hundred and eighty various events, as well as the ability to upgrade vehicles and their components. However, this is all further bolstered with a series of mechanics that introduces a series of power-ups from full-scale weaponry to speed boosts, interchangeable wheels to add bonuses or deal damage and for the first time ever, the ability to play the game in a split-screen mode; both offline and online in a series of combat races in eight-player skirmishes. 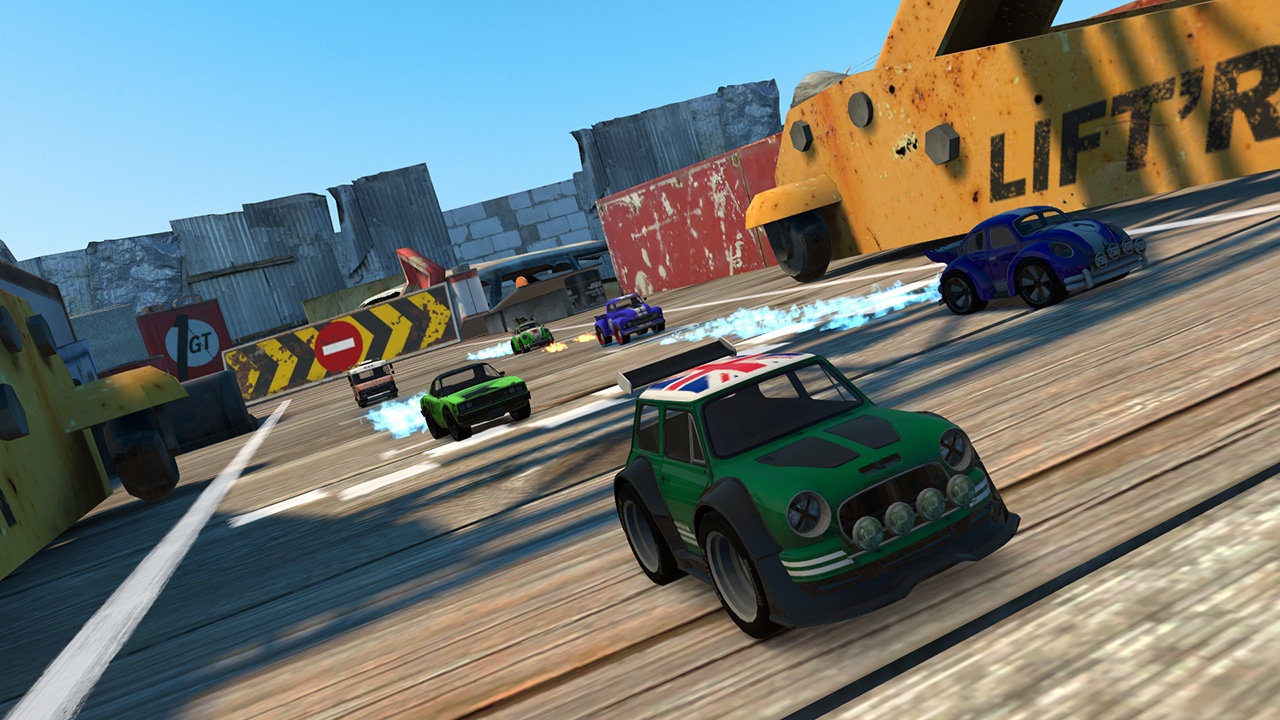 In terms of content, you simply can’t fault the game in any way. Its single-player offerings alone produces over twenty-five hours of racing exhilaration, with its online component potentially offering a limitless amount of entertainment. The main premise of the game involves racing over a series of championships across three different classes of vehicles. Each of the championships, from the Spark-Plug Trophy to the Twin-Cam Challenge are broken up into a series of events that take place over eight themed locations. One minute you’ll find yourself racing around the conveyor belts of a fully-licensed YO! Sushi restaurant, whilst the next you’ll be racing around a scenery of eighties-inspired toys and around the wine glasses and sub-rolls of a yacht-decked picnic.

Each of the tracks offer a variety of game-styles too, with time trials, all-out combat races, eliminations, chases and drift courses. Whatever race you may be partake in, each one offers a series of stars based on performance; accrue a specific total of stars and the next championship or car class event is unlocked. Successful racing also awards XP levelling and gold coins, all of which are used to upgrade any owned cars or purchase new ones, allowing you to partake in events designed for street racers and supercars, or just simply tweak your existing vehicle to produce more acceleration, faster top speeds, increased handling or simply bolstering your defences. Each of the tracks also encourage some form of exploration with a series of short-cuts and bonus coins that can give you the edge over the competition and award bonus values in your monetary prizes.

Car models are based on real-life variants, although they contain a distinct aesthetic that gives them a toy-like appearance. From the VW Beetle to the Ford Escort Mk1 and the Subaru Impreza up to the Pagani Zonda, each vehicle model resembles its counterpart in a recognisable way; each one hosting a series of different skins to add a touch of personalisation. Wheels too, come in a variety of forms that allows you to add your own touch; each one hosting a variety of buffs from extra coinage awards, more drift and protruding spikes. However, the most important aspect of each vehicle is how they handle, with each model offering a distinct variation, but also a tightness in their control that produces a pleasing racing mechanic. 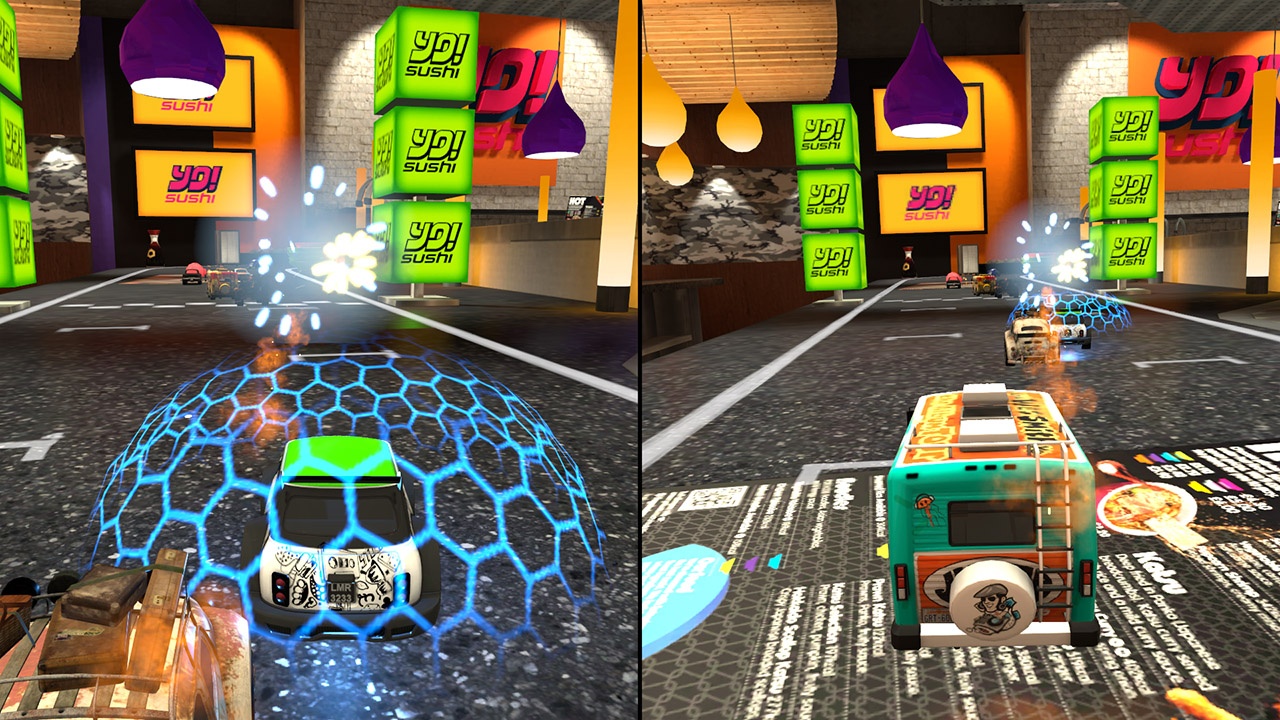 The control scheme, however, can take a little getting used to; especially with braking and acceleration being mapped to the right thumb-stick. It can feel a little unnatural at first, but with time, soon becomes a scheme that feels super beneficial in terms in controlling the speed of your vehicle. It allows for light touches on the brake, allowing you to perform drifts with ease, as well as maintaining a clean racing line through each of the interesting tracks. This soon becomes paramount as some of the courses also contain physical attributes such as lane-littering tin cans or pool balls; each of which require some smooth manoeuvring in order to avoid them should they stray in your path from the impact of another competitor.

Performance-wise, everything runs super smoothly with no apparent bugs being experienced throughout my time with the game. Even in split-screen, the game runs at a satisfying pace and with a silky smoothness that fully compliments the control mechanics. Everything just feels tight and you always feel as if you are in complete control of your vehicle at all times. The only disappointment I encountered, was in the fact that this review copy of the game was being tested before its release, meaning that I was unable to fully play its online component with a full lobby. However, what I was able to experience produced the same satisfying feel of gameplay as the single-player element of the game produced. I can only wait and hope with abated breath for the release date and hopefully, a series of fully crowded lobbies in which to compete.

Overall, Table Top Racing: World Tour – Nitro Edition presents the best version of the game I have played to date. Its satisfying racing mechanics, vehicle models, variety of courses and play-styles and smoothness of performance and control all adds to produce one of the better racing games available on the Switch today. There’s plenty of content and depth to get yourself stuck into, as well as the new inclusion of split-screen racing in all of its offline and online modes. It simply looks really good and also sounds great with an exclusive soundtrack of break-beats by producer Wes Smith of Juice Recordings. For a mid-range price, you’re simply get a top-end racer that delights with its revisiting of childhood dreams and simply defines the meaning of boys and their toys.

Its satisfying racing mechanics, vehicle models, variety of courses and play-styles and smoothness of performance and control all adds to produce one of the better racing games available on the Switch today.