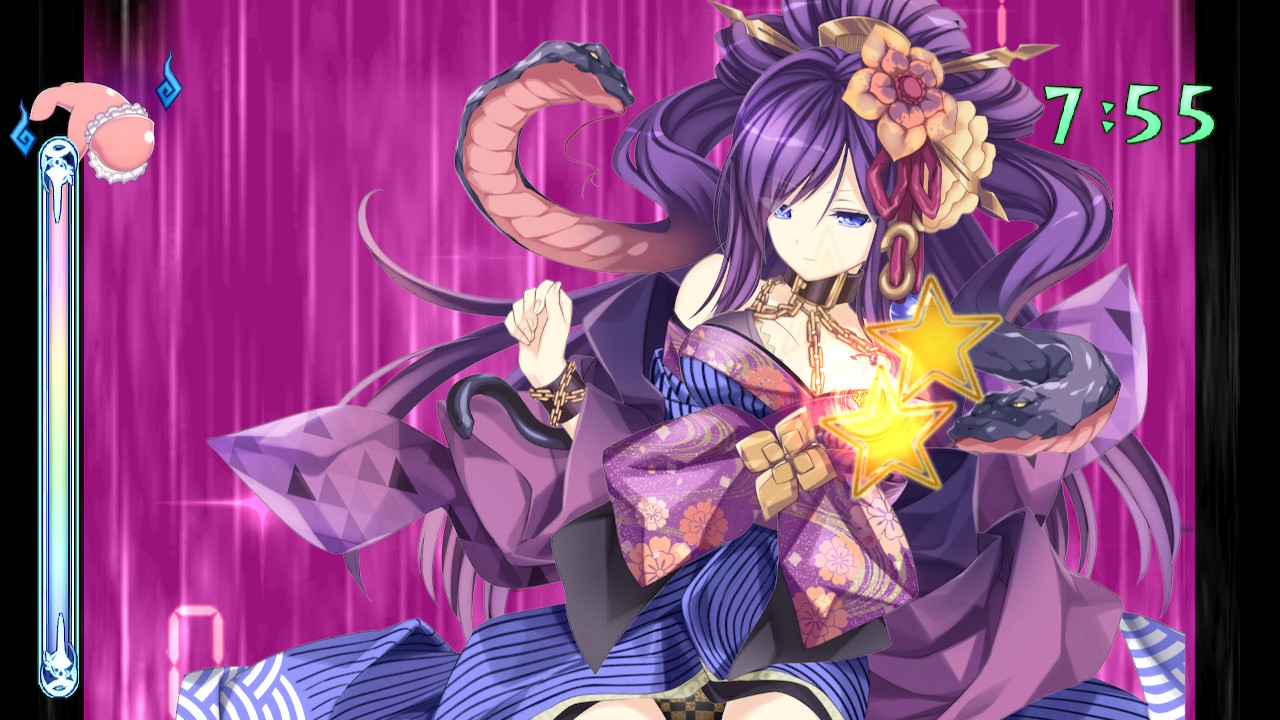 Nintendo, you really just can’t stop surprising me, can you? Sometimes it’s a great surprise, like finding out I can play Super Mario Odyssey in VR (once I get my hands on a LABO kit). Sometimes it’s confusing and upsetting, like the 8.0 update allowing for sorting by Publisher but not, oh, allowing folder creation. And sometimes it catches me off guard, like a hard right cross straight into the jaw and now this is the SECOND Chuck E. Cheese that has me banned. You forget, on occasion, that Nintendo has really rolled back some of their content restrictions and we’ve seen games like Gal*Gun 2, NEKOPARA and Senran Kagura: Reflexions already raise a ton of eyebrows. Still, when I saw that Moero Chronicle was coming to the Switch, I was a bit taken aback. “Wasn’t this the game where I grope demon girls until a seal orgasms?” Why yes, yes it was, and now it’s here, on the Switch, in the all new Hyper Edition.

If you read my original review of the PC version from a couple years back, you’ll be pleased (?) to know that the plot and core game intent still hasn’t changed. You’re Io, a dude who cannot talk to women without freezing up but seems to align with monster girls no problem. Io learns, through a series of brutally funny exchanges, that there’s something going on with monster girls across the land and they’re becoming aggressive and hostile towards humans. Io is chosen, through a series of hilarious lines, to find out what the hell is going on, and also why the monster girls are suddenly very vocal and angry about different sexual styles as well. Io and Lila (monster girl friend from childhood) venture off and quickly find Otton, a talking seal with a beautiful voice and a perchance for panties, who guides them in the right (?) direction. There’s something going that’ll lead you to the front door of several monster girl queens, and things really just get funnier and weirder until it all leads to a big climax. I am so sorry for that last line. 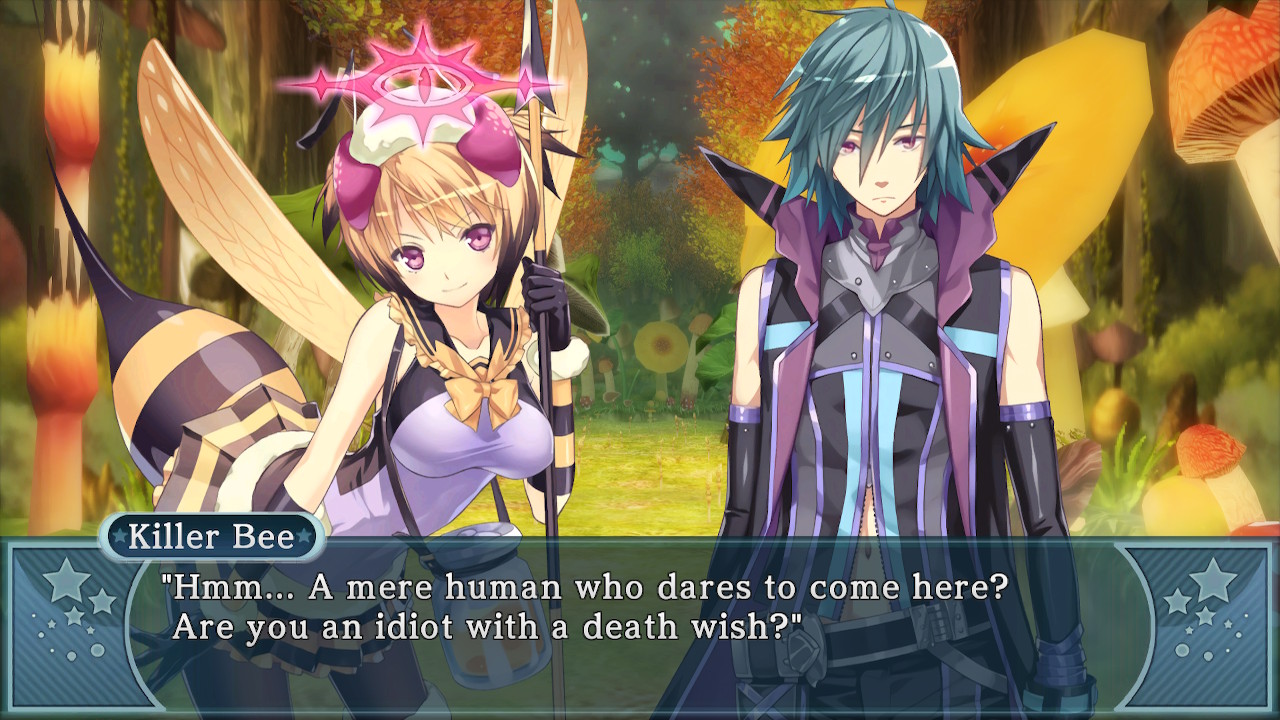 Moero Chronicle Hyper is still a first person based dungeon crawler with a max of five party members, a very classic style (if not aesthetic) and tons of stuff going on behind the scenes. There’s a matter of elemental weaknesses to consider, the ability to change the different characters skills through giving them different underwear, building relationships that affect battle through conversation and gifts, and tracking down, battling and recruiting 50 monster girls, not to mention occasional random mobs who want to join your party. When the game gets going and you’re focused on the strategic essence at hand, Moero Chronicle really does go toe-to-toe with modern dungeon crawlers like Grimrock or Vaporum, though on drastically different terms. If you’ve got any inclination of what Idea Factory and Compile Heart like to do, you know there’s nothing subtle about the underlying sexual content, and the fact that the game is “Hyper” but often shortened to “H” is as subtle a nudge as getting rabbit punched. Anyone who gets this game and then gets offended by the sexual content is a fool and an ignoramus for ignoring all the signs.

Moero Chronicle H supremely delivers in the Switch port in terms of graphics, sound and streamlining, as well as making it more tactile for the console. Everything from the cute characters to the lewd monsters and all the graphical designs of the dungeons have come over with zero compromise to the detail or the color balance. The game looks even better on my Switch than it did on my computer because the machine is optimized to run the game instead of my clunker trying to figure out the balance of visual and actual performance. The game is listed as having an HD upgrade for graphics, and I feel like the difference was clear without being a total 180 from the original. Moreover, the voice over talents of each character are intact, in full Japanese, and crisp and clear as you could hope for, even when they’re feebly protesting you destroying their clothing. Additionally, Idea Factory took mercy on Switch players in two different ways, cutting the game’s install size in half from the PC and keeping the price at the same level during the launch window. Seriously, bless these guys for allowing such a gamble of a title to get released and to have it at a sweet twenty-dollar spot that should encourage a lot of impulse buying, especially when players find out they can a.) play the game great with a smaller memory card and b.) can play it far, far away from the living room. Additionally, the ability to select a spot on the mini map and have your party “auto move” there without needing to figure out navigation yourself means being able to simply “set and forget” destinations, so you can focus on fighting and if you’re about to miss your bus stop or not.

What many players will be interested in is how the BumpingScratch, aka “touch girls until the seal has had enough,” mechanic has been implemented. As the only way to recruit more monster girls to your party (and the only way to move the story along most of the time), the game has graciously allowed for both button and touch screen activation of finding the sensitive spots on the girls, poking/rubbing vigorously and eventually unlocking the nude flash for full coin overflow and the deepest feelings of shame. The touchscreen version is probably the easiest, allowing for two hands to probe the girls, though you do need to have the JoyCon at the ready to pan up or down to reach different areas. If you prefer button controls because you have the game up on the big screen, it’s simple enough to move around, poke with a button and then simulate rubbing with the right joystick. Either case is infinitely easier than the PC version, where I would sometimes not find the right spots in time and need to go back and fight/capture the girls all over again. Also, the HD rumble has been put in with generous (but not overly sensitive) feedback to ferret out the right spots, so do your thing and get those girls, because the game is ready for you. 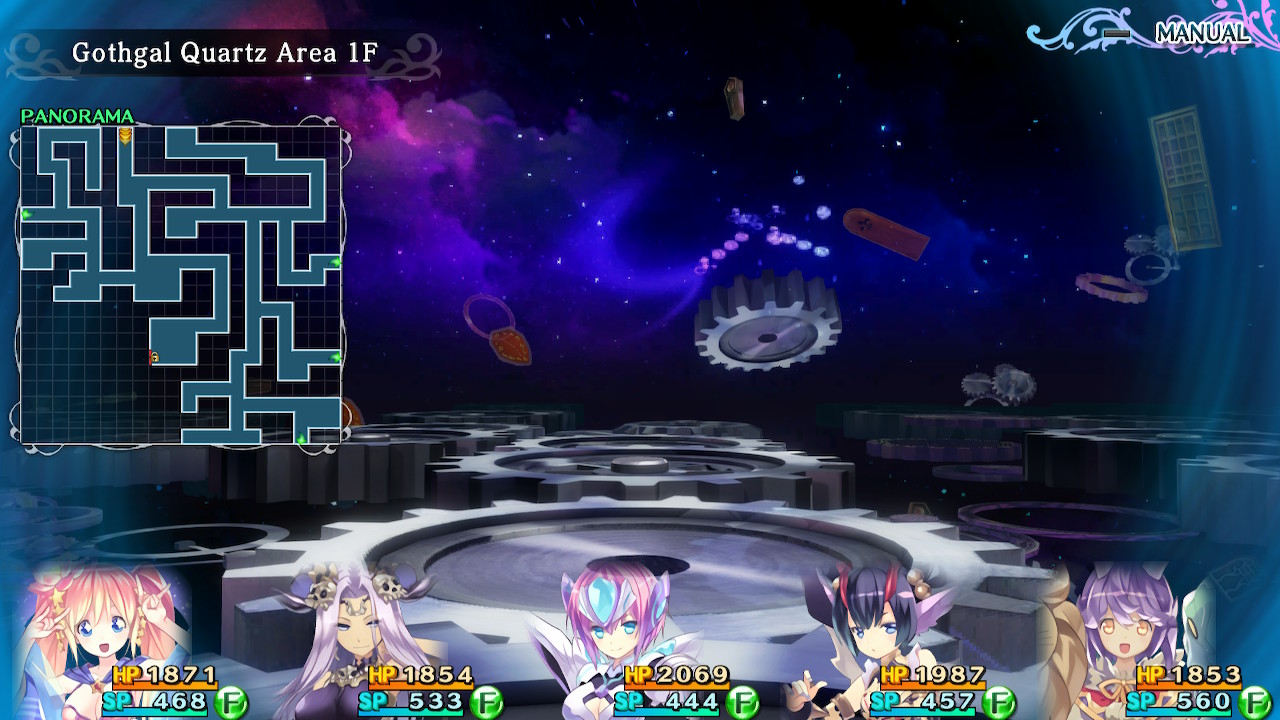 My only complaint with Moero Chronicle Hyper is the very nature of the game now that it’s portable, and I think this might be an isolated complaint. One thing that Idea Factory does over and over is have very straightforward and simple save systems, meaning they’re affixed to save points and the slots have no descriptor or note other than the time when you saved. Now that the game is portable, players are able to play for longer tracts of time, meaning they can get further and further without making sure they find save spots in time to go do other things. I don’t have to save as I walk out the door, I can simply throw my Switch in my bag and then resume on the commuter rail if I feel comfortable enough. This is a time where I think the game would have benefited from having anywhere saves so that the game could be turned off at a moment’s notice or, if your battery goes dead, your progress isn’t totally wasted. I got cocky early on and flew through two levels of the mushroom forest, only to get my butt handed to me when I stumbled, under-leveled, onto the next floor. Not only did I have to go back to my last save, I had to re-capture Latte and a couple of other monsters. Save early, save often, don’t get too distracted by monster girls. And make sure to head back to the nearest save spot as soon as you defeat a prominent character!

Overall, Moero Chronicle Hyper is still the same joyful, hilarious and ridiculous experience that it was on the PC, but now it brings better aspects to the table. You can play it anywhere. You can dedicate more time to building relationships, finding hidden treasure chests and getting the right traits and skills to overpower your team. You can sit through the long-winded exchanges between everyone and just enjoy the nonsense of the storyline and the characters. This game is still perfect for those of us who like humor in the same vein as Phil Foglio or Heavy Metal, and even more for people who like ecchi comics. This shouldn’t be the dungeon crawler to start off with, but it’s damn fun eye candy and has enough clout behind it to keep players invested for multiple runs. Don’t forget to adjust the difficulty depending on if you are focused on gaming or focused on the girls, and just have a good time. If this is on your radar, don’t sleep on the launch discount.

With better graphics, HD rumble and fast travel options, Moero Chronicle Hyper is the Switch’s own guilty pleasure with more than just boobs & butts behind it.