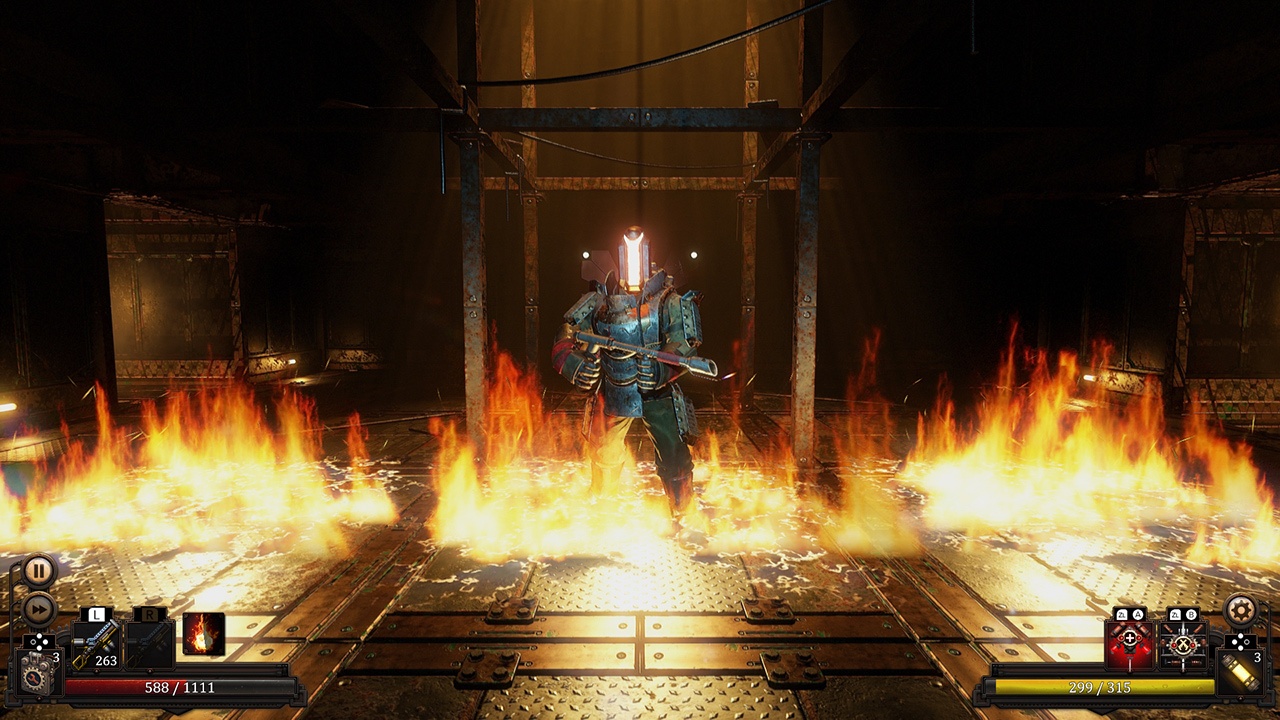 Console games were always meant to be the easiest vessel for the medium of interactive entertainment. You buy a game, insert the disc, and simply play. In fact, the current generation went even a step further by slowly eradicating the physical games, allowing you to simply purchase a digital copy without leaving the comfort of your own home. However, as convenient as digital-only games may be, they do come with their own array of issues and the recently released Vaporum, the RPG of yesteryear, comes with its own, little, uncomfortable budget.

When I first fired up Vaporum on my PlayStation 4, I was faced with an error which disallowed me from creating any save files for the game. But after playing countless indies, which featured similar bugs and glitches in the past, I made nothing of it, as even acclaimed titles such as The Binding of Isaac to this day suffer from this error. However, a simple restart of the game doesn’t fix it for Vaporum. So if you decide to pick up this rather impressive steam-punk RPG of yesteryear on PlayStation 4, you will most likely have to rebuild your console’s database to make it work as it should and if you want to know how to do it, then scroll to the bottom of this review for a quick guide.

Besides the abovementioned issue, this is not solely on the part of the title, or even the developer, as it is likely that Sony is playing a big part in its occurrence because in essence, Vaporum is a downright flawless experience. On the technical level, it tops the majority of modern indies, as despite its rather pleasing visuals, it doesn’t suffer from stuttering, frame drops, or even screen tearing and this is especially impressive, due to the fact that in-game, you can do a 360-degree turn in a split of a second. Even when you are in a room filled with steam, lighting effects, enemies, and moving machinery, Vaporum never drops a single frame and while this should be a standard for every game, then unfortunately it isn’t and that’s why it is so impressive for Vaporum to work so incredibly well.

As mentioned above, Vaporum is a fully three-dimensional release, but it is not a half-baked title unlike some of the modern indies. It comes packed with a wide array of lighting effects, special effects and high quality textures. The latter are truly a thing to behold, as even up close, they don’t lose their fidelity, as they are simply razor-sharp and sure, the environmental design did allow the developer to not go out of its way to create hundreds, upon thousands of objects and textures, but even with that taken into consideration, the quality of Vaporum is still a thing to behold. 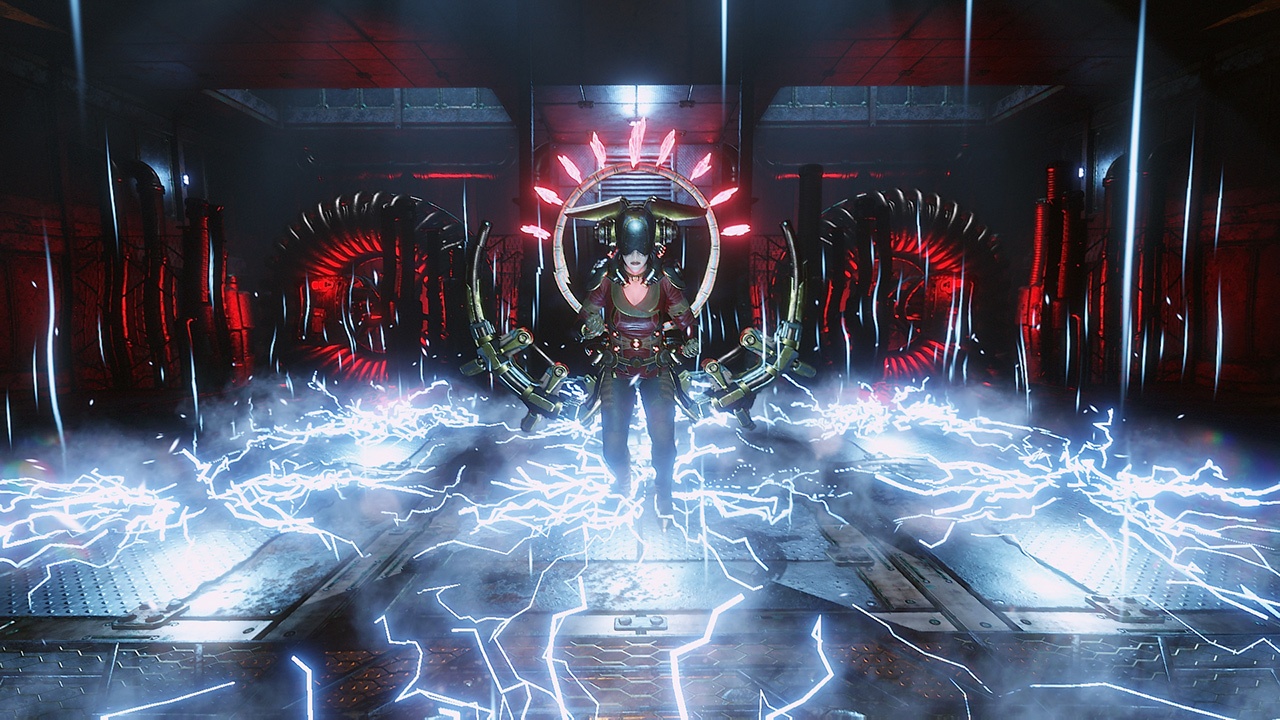 The overall quality of Vaporum will be up to everyone’s liking, but unfortunately the same cannot be said about the title’s aesthetic, as the deeply entrenched steam-punk vibe of the game can, and likely will, put some of the potential players off, as those who were growing up in the early-to-mid 2000’s will remember the cringe which the steam-punk, rugged top hat and monocle wearing crew has been responsible for creating. But even if you can’t take the aesthetic of Vaporum seriously, then you should still give it a go, as it’s simply a title worth experiencing.

At its core, Vaporum is an old school RPG and I don’t mean old school as in Gothic, or even The Elder Scrolls: Morrowind. I mean old school as in Eye of the Beholder, or Wizardry, as it is a first person perspective title, with limited movement where you move block by block and deal with the world and its surprises as they come. Even though it is a FPP title released in 2019, it does not allow you to simply move with the left stick, and simply turn around using the right, as in-game, you turn by exactly 90 degrees whenever you move the right analogue stick and can only scour the environment when moving the right stick, while holding R2.

When it comes to exploration and combat, such is also old school to the bone, as you interact with the world using the cursor, which appears on-screen when you hold down L2 and defend and attack using the bumpers. You can’t just hack away at the countless, Tesla inspired death machines, as each and every in-game attack comes with cooldowns and while you can hold down L2 and attack over and over again, then even those attacks go into action whenever their corresponding cooldowns finish. While some of you may not be used to such an approach to combat, then ultimately, it does add another layer of complexity to the game, as it constantly forces you to adapt to your circumstances, instead of just holding a button like in Dragon Age and hoping for the best. 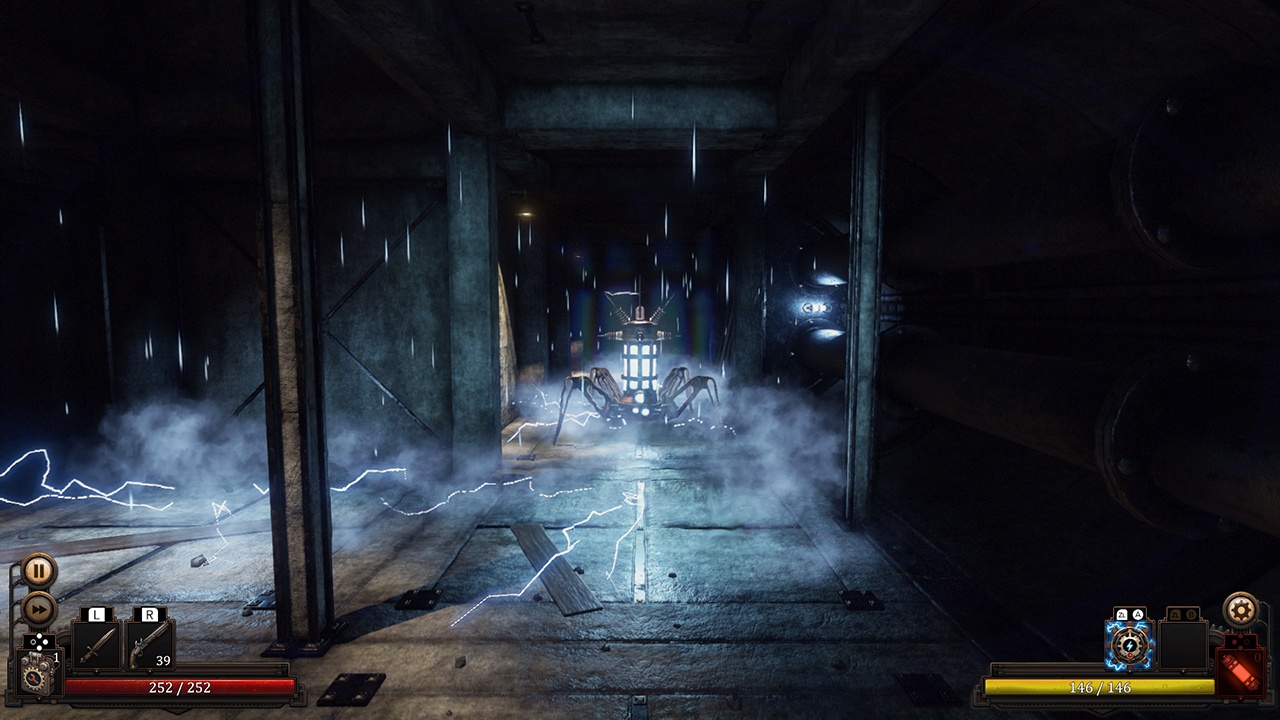 While on your way through the chambers and corridors of Vaporum, you will come across countless weapons, perks, equipment and consumables which allow you to further customize your experience. However, the in-game menus, while working well on PC, can be a little difficult to navigate on consoles; as without mouse and keyboard, moving items from storage to your inventory and subsequently, your equipment slots can be a little cumbersome and finicky at times. With time, you will likely get used to it and find a way to navigate it effortlessly – very likely with the use of L3.

Usually when discussing a title I like to cover its playtime, longevity, and difficulty, but Vaporum can be as long as you want and as short as you desire. In the same way it can be as easy as you want it to be, but it can also be brutally difficult and it is simply all up to you. Want to blast thorough it in couple of hours, while being damaged by one health point by each and every enemy? You are welcome to do so. Want to spend half a dozen hours getting mauled to death by what appears to be flying vacuum cleaners? Go ahead.

The sheer customizability of the Vaporum experience, overall quality aside, is the title’s best feature – at least to me. It allows you take in its world and the haunting tale which it tells at any pace and intensity, which you desire and that’s great, as it allows both the thirty-odd year old veterans of the grid-based dungeon crawlers to feel right at home; but it also gives a newcomers a chance at giving it a good go and even beating it. Even if you opt-in for the easiest possible playthrough at first, you can always go back and ramp up the difficulty and give it another go, because ultimately, Vaporum, just like the old-school dungeon crawling RPGs of yesteryear, has been designed to be played multiple times.

To conclude, all that really has to be said about Vaporum, is that it is simply an incredible game, as from its technical cellar, all the way through its mechanical floors and to the top of its audio-visual roof, it is simply breath-taking. At times though, it can feel a little too-old school as the lack of any profound combat animations can be a little off-putting, as white slashes across the screen only go so far and they don’t really give the in-game encounters the weight and gravitas which they really deserve. But even with that taken into consideration, Vaporum is still a title which should be given a chance, even at full price.

Rebuilding PlayStation 4 Database: In order to rebuild your console’s database, you have to first power it down completely (do not put it in rest mode). Turn it back ON using the power button, and hold it until you hear a second beep. Once your console has beeped twice, let go of the power button, and follow the on-screen instructions – which will ask you to plug-in your controller using the micro USB. Once faced with a black and white, BIOS-like menu, scroll down to ‘Rebuild Database’, and simply Press X. This should resolve your save data problem, which you may come across while playing Vaporum.

Vaporum is a surprisingly strong title, which does not only uphold the values of gird-based dungeon crawlers of yesteryear, but also gives the absent genre a breath of fresh air.