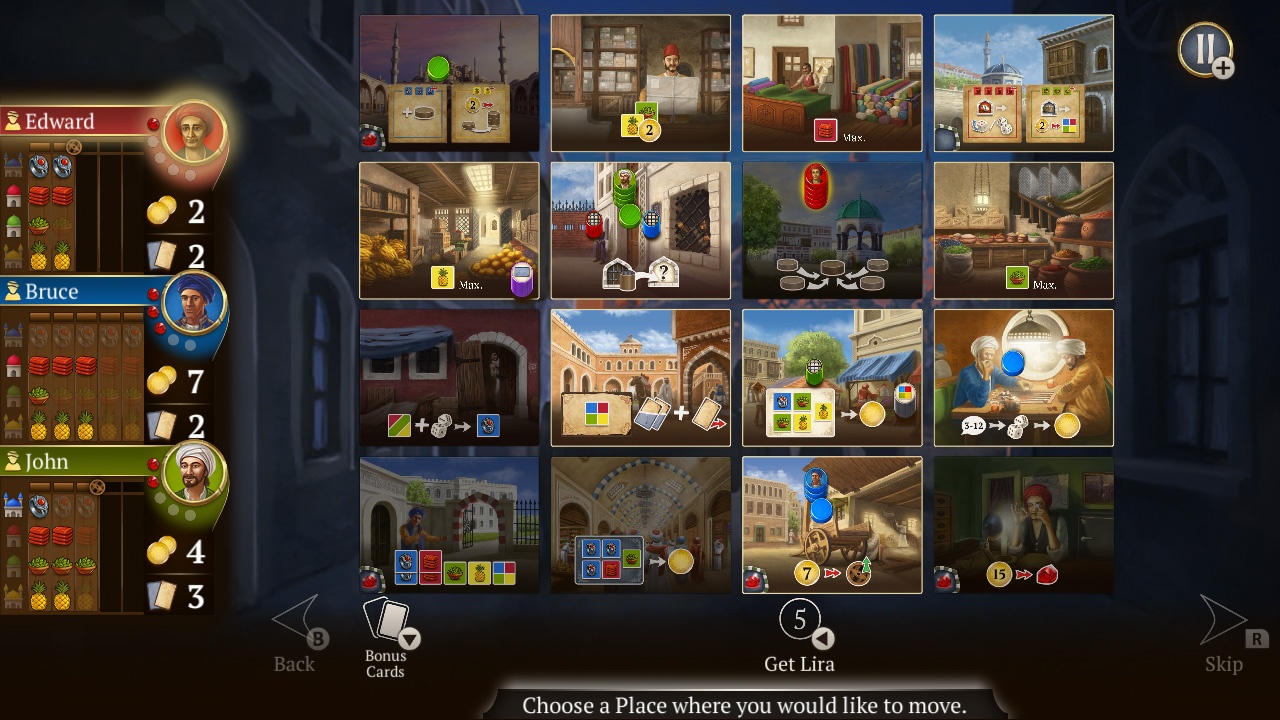 Board games have seen a surge of popularity in recent years, they’ve even overtaken video games as the most popular category on crowdfunding site Kickstarter, with several video games getting board game adaptions. There have, of course, been adaptions going the other way with family classics like Chess, Monopoly and Risk getting the digital treatment – plus a steady stream of Warhammer games. Although it doesn’t have the pedigree of the aforementioned titles, Istanbul has made a name for itself among the tabletop community, so it makes sense we’re now seeing it converted to a video game.

The ‘board’ in this case is actually a grid of 16 tiles that represent a bustling bazaar, which plays host to 2-5 players competing to become the top merchant by being the first to earn five rubies. The market theme is one of Istanbul’s best features, with some nice colourful art on each tile depicting each location. It also has a fairly unique gaming mechanic as rather than scoring points with your merchant, it’s your apprentices that you drop off at various stalls and locations that can trade and complete tasks for you. Gameplay therefore, revolves around planning your route so you’re able to efficiently collect apprentices again, plus it’s possible to block other players so that the only way they can enter your tile is by paying a penalty. 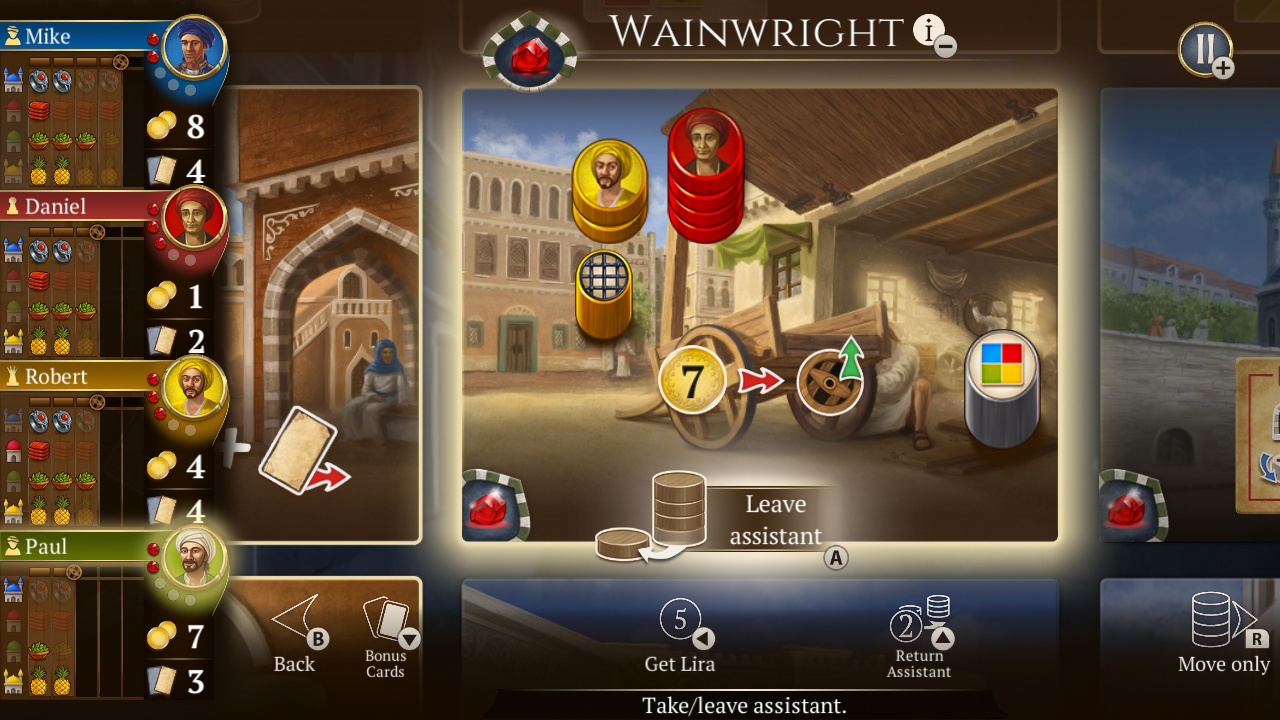 Released into the crowded world of board games in 2014, Istanbul quickly garnered a host of awards and has been ever-present in the top 100 list on BoardGameGeek. Despite this, I’d never played it before and I didn’t find the digital version a useful place to start. The brief tutorial wasn’t particularly helpful and although all the rules are accessible during the game, it’s not the same as having a printed version available to read. This was quite a problem as although Istanbul isn’t the most complicated game, it is initially overwhelming trying to learn the rules of each tile and the various scoring mechanics. Playing against CPU players doesn’t really help you learn either as they complete their moves so quickly, although there is at least a replay option so you can double-check what moves they made.

Of course, a game like Istanbul is best played against other people and once you have all learnt the rules to a basic level, it is very fun as you all race around the board trying to complete various objectives to earn rubies and get in each other’s way. The fact there are so many ways to obtain rubies is great and adds much variety to the game, and makes those moments when you do come into conflict with other players even more fun. Although online multiplayer is available it kind of defeats the point of this sort of game (although there don’t seem to any players online anyway), but playing locally is good fun – which makes up for the fact playing single-player against the CPU is pretty dull. 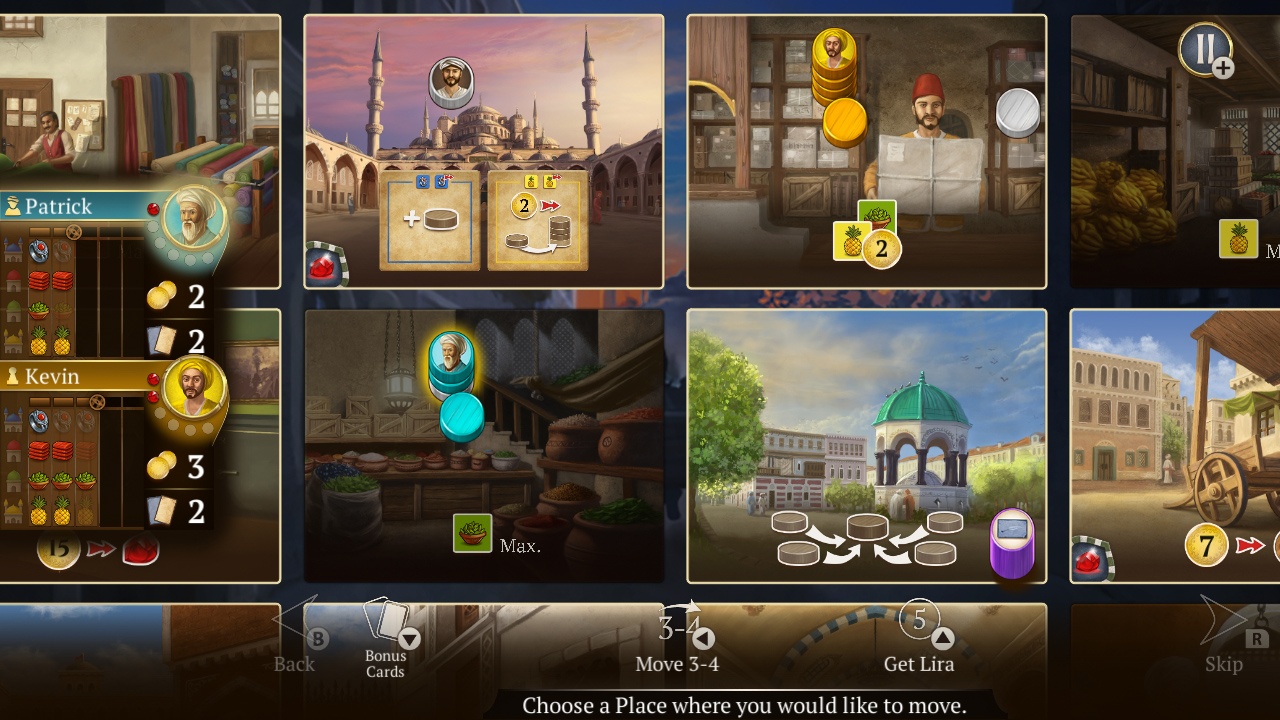 Another glaring issue is the fact that on anything but a very large screen, it can sometimes be hard to make out the various icons and figures (don’t even consider playing in handheld mode on the Switch). The lack of clarity is further exacerbated by the lack of any kind of graphical flourishes to raise the digital edition above the tabletop original. It already loses out on the immersion factor by not having the physicality of a real board and pieces. Admittedly there is a basic soundtrack of vaguely middle-eastern music but it is very basic and doesn’t add much to the experience. In fact the only innovation that the digital edition brings is a colour-blind mode, as it’s always good to see developers taking accessibility into account.

While the core gameplay of Istanbul is very enjoyable I can’t see this version appealing to newcomers and for existing fans it’s clearly an inferior experience to the physical version. Admittedly, it is quicker to set up and pack away than the board game version, but when that’s the most positive compliment I can provide then you know there’s a problem.

A disappointing adaption of a great modern board game that brings nothing new to the table.