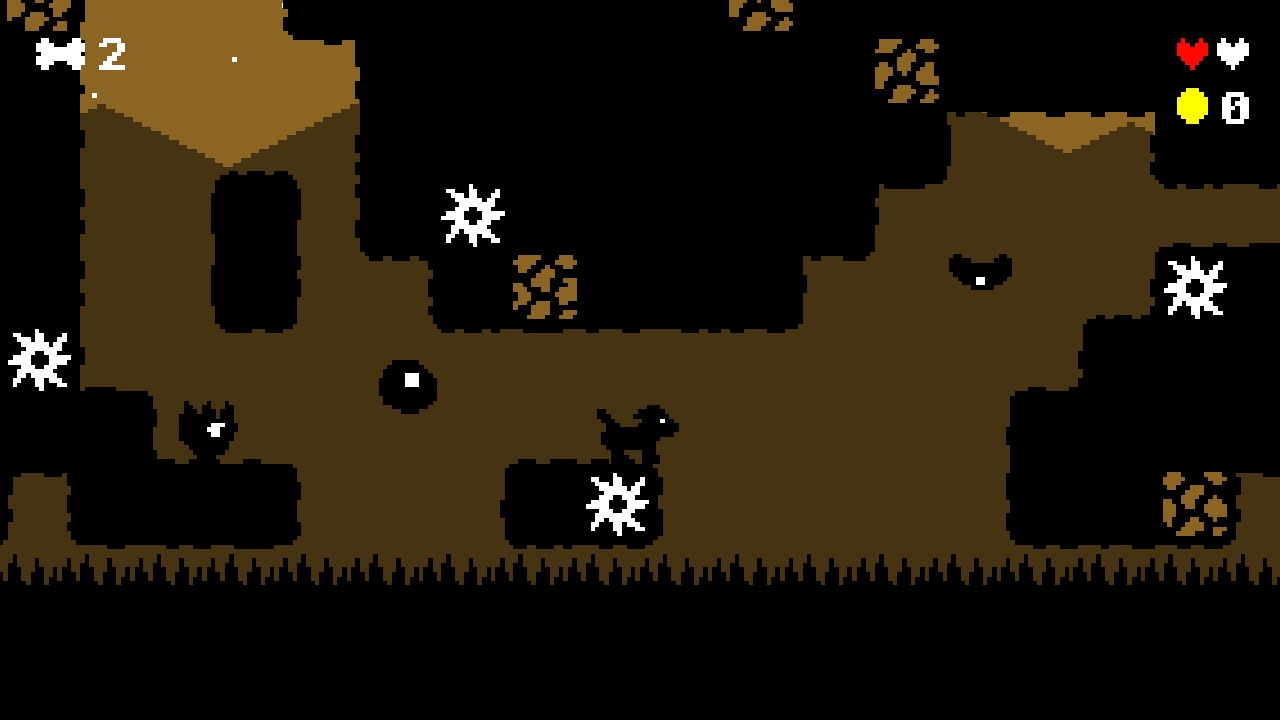 There’s a moment when you simply can’t put something into words, and just need to trust that you’re doing something or going somewhere because of intuition. When I take detours or new roads on my way to point A from point B, it’s mostly in the name of curiosity and boredom, but there’s also an element of “why not?” that stems deeper. That’s the same kind of feeling I got when I laid eyes on Dig Dog, a game from Wild Rooster. There’s nothing about it that looks particularly crazy, but there’s just the right combination of things in the screenshots that call to me, and I have to answer. “Worst case scenario,” I thought, “I’ll be done in a few minutes, tops.” Instead, I ended up putting several hours in, and I gotta say that this is my best surprise of the year so far.

Dig Dog is a simple, procedurally generated action platformer about a dog trying to get a bone. Each level is full of traps, enemies and randomly placed things that will either help or seriously hurt you on your way to the bone, which is buried down deep in a 99% destructible level. Dig your little heart out, get to the bone, and get to the next level. You can jump on enemies, you can do this awesome doggy power slam into them, and…well, initially, that’s it. But you want that bone. Have you ever seen a dog trying to get a bone that he NEEDS? That’s you. Do it. Get that bone.

On paper, it might not seem like much, and there technically isn’t. You can dig on regular blocks of dirt, you can’t dig through the slotted blocks that look like metal rebar, and you seriously don’t want to dig into the giant buzzsaws that exist throughout the levels. You can either do the Free Dig (easy) mode or the Bone Hunt (hard), and I recommend doing the Bone Hunt first to get a feel for how bad things can be before doubling back to Free Dig. I don’t know if there’s an end to Free Dig, but I got to level 50 of digging before I decided that I needed to give it a break. Don’t get me wrong, Free Dig is great, but the easiness of it is pretty heavy-handed. There are enemies after a while, but they aren’t anywhere nearly as threatening as you might think, and you can die and simply start again from wherever you left off. With Bone Hunt, you have only one life to live, and stepping onto spikes, hitting a buzzsaw or, like me, accidentally killing the shopkeeper will end you fast and leave you frustrated. 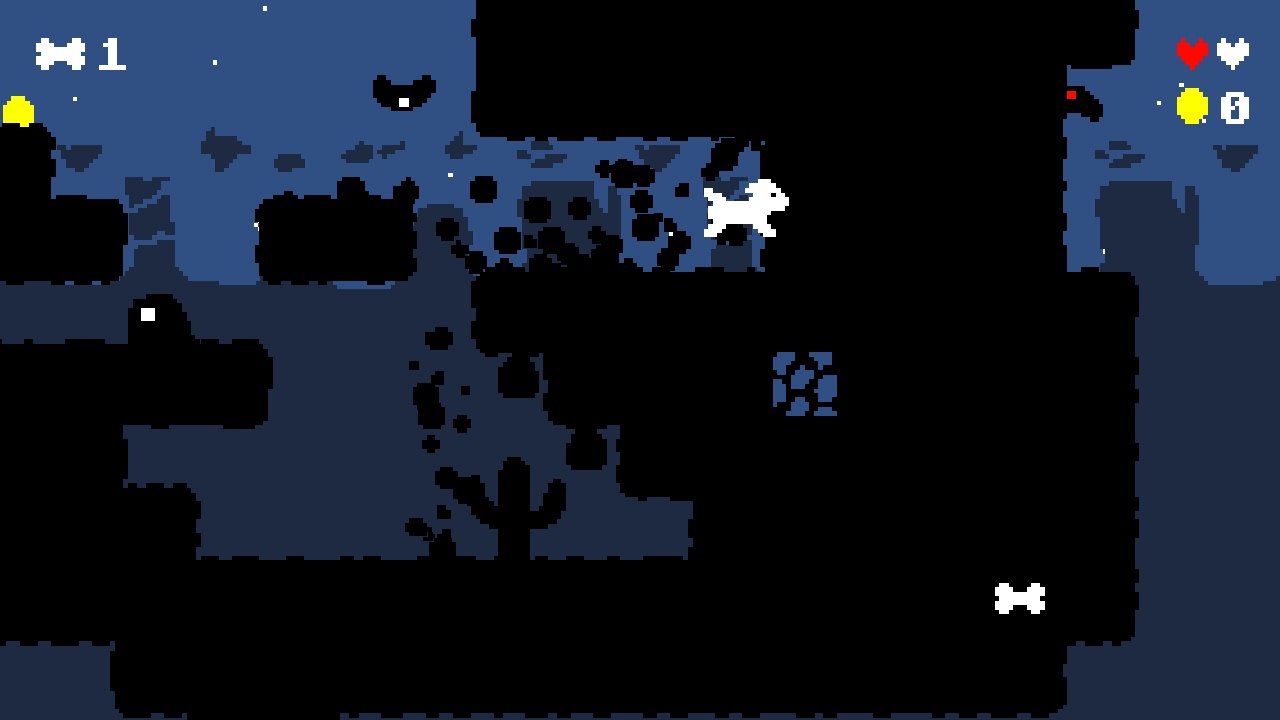 Right, the shopkeeper. Here’s my only real issue with Dig Dog, and I want to get it out of the way early. Enemies will occasionally drop coins, which can be used at the shop to get various “power ups” to use for your run. These powerups include things like being able to reflect projectiles, extra health, and something to do with buzzsaws that I didn’t get to work properly. But there’s also really cool stuff that feels more integral to the dog’s actual movements, like ledge grabbing and an increased jump distance. I wish there was a third mode where these powerups were cumulative, because you lose everything when the game over screen comes, which usually renders the hunt for coins and the subsequent hunt for the shopkeeper useless. Although, I will say there’s brilliant strategy in luring some enemies into the shop and either a.) having the shopkeeper go aggro on them or b.) having them kill the shopkeeper and face the blue buzzsaw’s wraith. Generally speaking, though, you can do most of your runs without getting to the shopkeeper.

Yet, for Dig Dog, that’s my only issue, and I’ll chalk that up to personal selfishness more than anything else. The game looks fantastic in a real, dark pixel style. The way everything stands out against a stark background makes for minimal install size, easy differentiation and unique properties to the multitude of enemies that you face, from your simple runners to those little beggars that shoot things at you. After close to a hundred runs, I can earnestly say the bats are my number one most hated thing, because of their flight patterns, their ability to start following you even though you don’t see them AND that you can’t tell if they’re holding coins or heal hearts until after they’ve unfurled and start pursuing you. When you travel between the different worlds (after four stages in the previous world), everything changes, from the color scheme to the enemy type and even the type of land. Starting in the second world, you get these explosive blocks that can detonate several spaces around you, making for faster digging but also triggering buzzsaws (which, again, fatal). You have this whole shtick with the fourth world where there are long tunnels of undiggable area that you just have to deal with or die. And then for it all to loop back together should you successfully complete the stages feels strangely satisfying. After all, the dog isn’t trying to save someone or take down somebody, he’s trying to get some damn bones. Of course he’s going to keep going, he’s a dog! There are more bones! Get in there!

Additionally, Dig Dog packs some of the best background music that I’ve heard in recent memory. Each level has its own appropriate soundtrack, giving you this classic adventure feeling that combines energy and jauntiness with a bit of foreboding and menace without anything being horrific. While every track is special and cool, I have a huge affinity for the Desert melody, and I wish I could specifically lock that one track in for the duration of my plays. It has this air about it that invokes “if Balloon Fight was made today,” and I mean that in the best way. Additionally, since I’m trying hard to get the full loop down to under three minutes, I’d prefer not to have to swap the songs as quickly as possible, though I know I’m still a ways away from that milestone. 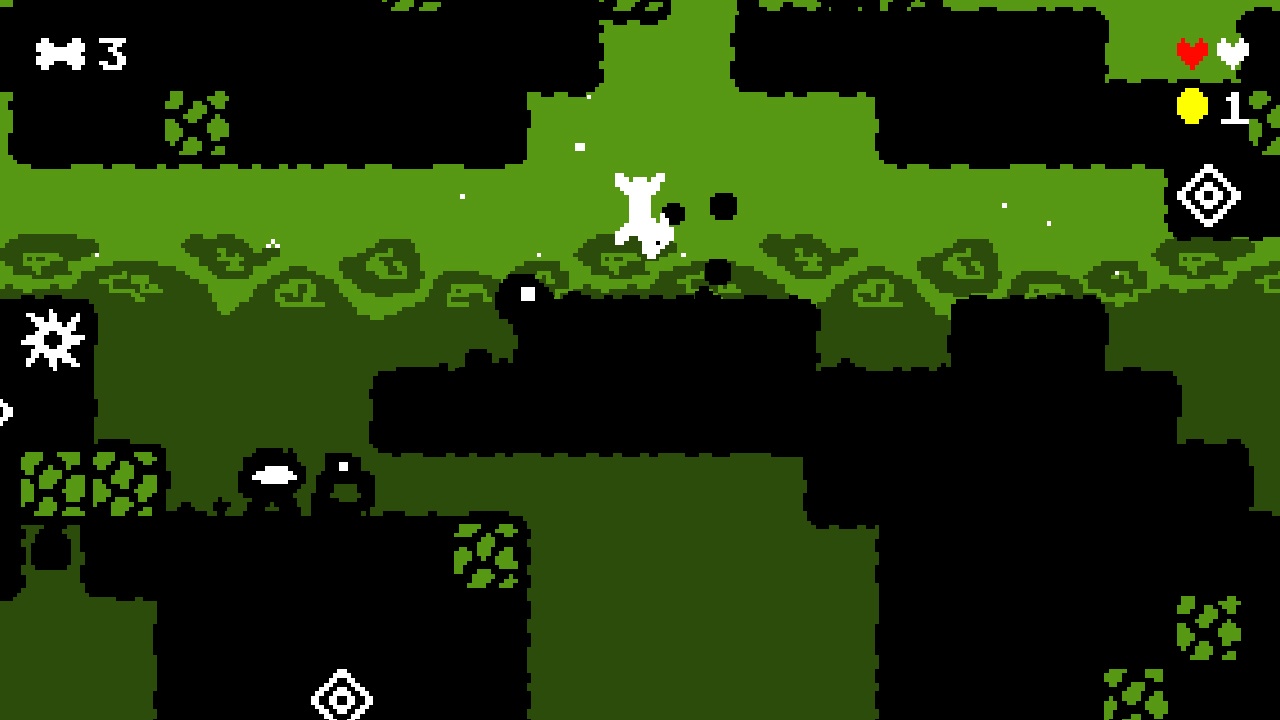 There’s plenty of reasons to keep going back down as well. Dig Dog has packed in a combination of achievements and unlockables in the form of color palette swaps, and each has their own goal posts to work on. Some, like dying 1000 times or digging up 1000 bones, feels borderline Sisyphean and I wouldn’t recommend that to be anyone’s primary directive unless they’re already enjoying themselves. There are, however, a couple of hidden achievements that are worth hunting down, and I think I was able to get one of them (though I won’t spoil that here). The color swaps are worth their weight in bones, which is also how you unlock them, and I’ve already fallen completely in love with the Wave Dog neon aesthetic. Please note that, when you do a palette swap, EVERYTHING changes color, so don’t get freaked out and suddenly think every enemy has a shopkeeper-style buzzsaw inside. They just have coins, and the color is a coincidence.

I play games, I enjoy them, and I move on. But Dig Dog is a special sort of creature, and it’s just stuck, fixedly, on my Switch. It’s small, it’s an exceptionally good price, and it has that certain charm and appeal that keeps roguelite addicts coming back again and again to try and get their time better, to find all the hidden gems, to try and see what that fifth bone is all about. Additionally, I CANNOT believe that the primary developer, Rusty Moyher, was able to program this entire game through voice recognition software alone, and design the characters with a reflector hat to mimic a mouse. I can’t even type up an article unless I’m using a specific keyboard, and this man did an entire game without his hands, AND IT’S FUN AND GOOD. Seriously, kudos for this accomplishment, and thank you for setting a whole new bar for would-be designers and developers. Don’t just enjoy this game: dig it.

Dig Dog proves that simple ideas, when executed beautifully, make for some of the most enjoyable experiences, bar none.