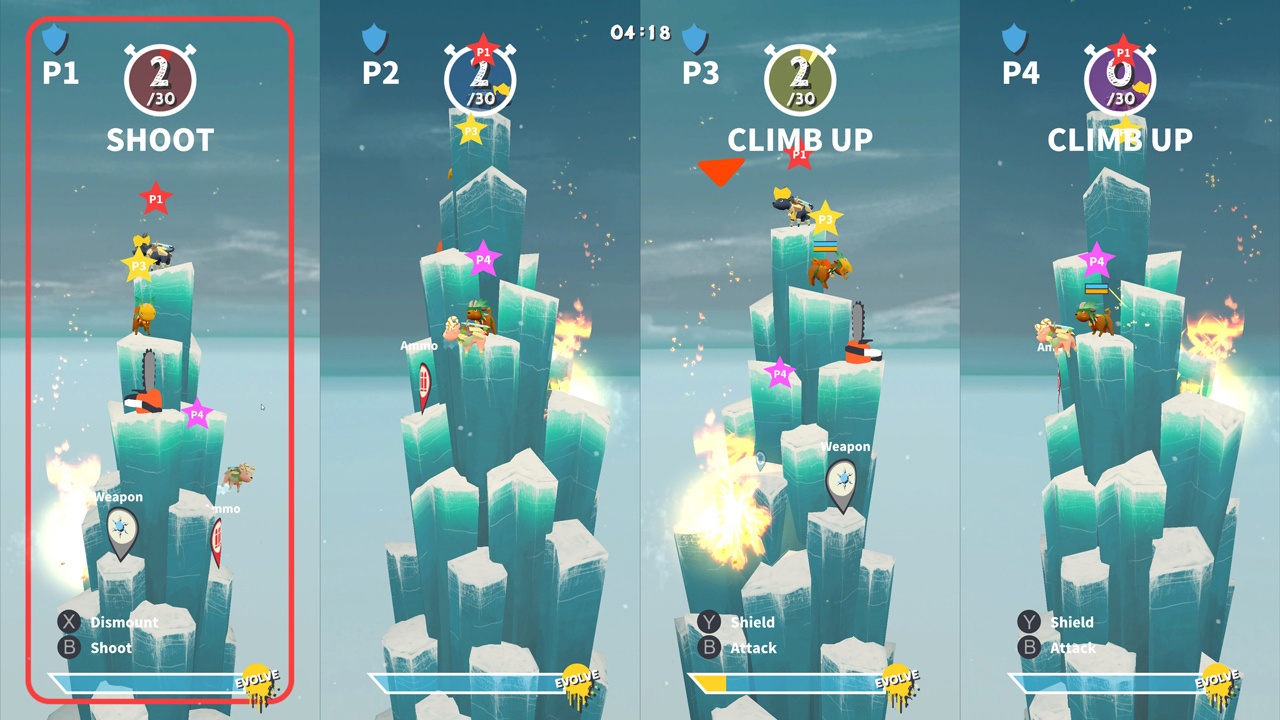 The Nintendo Switch is going far and beyond what I think anyone at Nintendo or the video game world in general could have anticipated, and there are just so many factors at work here. Yes, it’s a properly powered, portable console, but that’s only a small bit of it. The Nomad was a full Genesis that you could carry around, but it was crazy expensive, ate batteries like Pringles and was counting on a dying library to support what was essentially a new system. No, the Switch is more than a go-anywhere game station: it’s a friendship keystone. People who are a tad older can understand that they get friends and keep them even if they don’t see them everyday, but children, especially ones who are preadolescent, can’t always grasp that intangibility. As much as kids love playing Fortnite and winning the battle royale, it’s bragging about it to friends the next day at school, or doing the same goddamn dance every day at recess together that makes the whole dynamic work. And it’s this sort of thinking that brought GoatPunks to the Nintendo Switch, and why it can potentially succeed.

GoatPunks, from Studio Canvas, is a one to four player action/party game where you take the role of a goat, trying to get to the top of a mountain. There are a handful of play modes, but the base idea is that you want to get to the top and stay there for as long as possible. You can unlock different, colorful and detailed goat avatars to use in the process, and the mechanics and idea are far sillier than simply a goat leaping up a steep cliff face. When you get to the top, you have the ability to shoot rockets and try to knock other goats off as they attempt to usurp you, and there’s plenty of goat on goat combat while you’re all actively scaling. There’s local and online multiplayer, so you’re never forced to goat alone, but single player options do exist if you’re interested in perfecting your leaping, trying to conquer the tournaments solo to unlock other goats, or generally just want to be a gruff goat, isolated. Naturally, that last choice isn’t one the devs expect you to take often, though I’m glad it exists, especially since this week my kids are especially busy with field trips and such and I didn’t have hands on for players two and three that much. 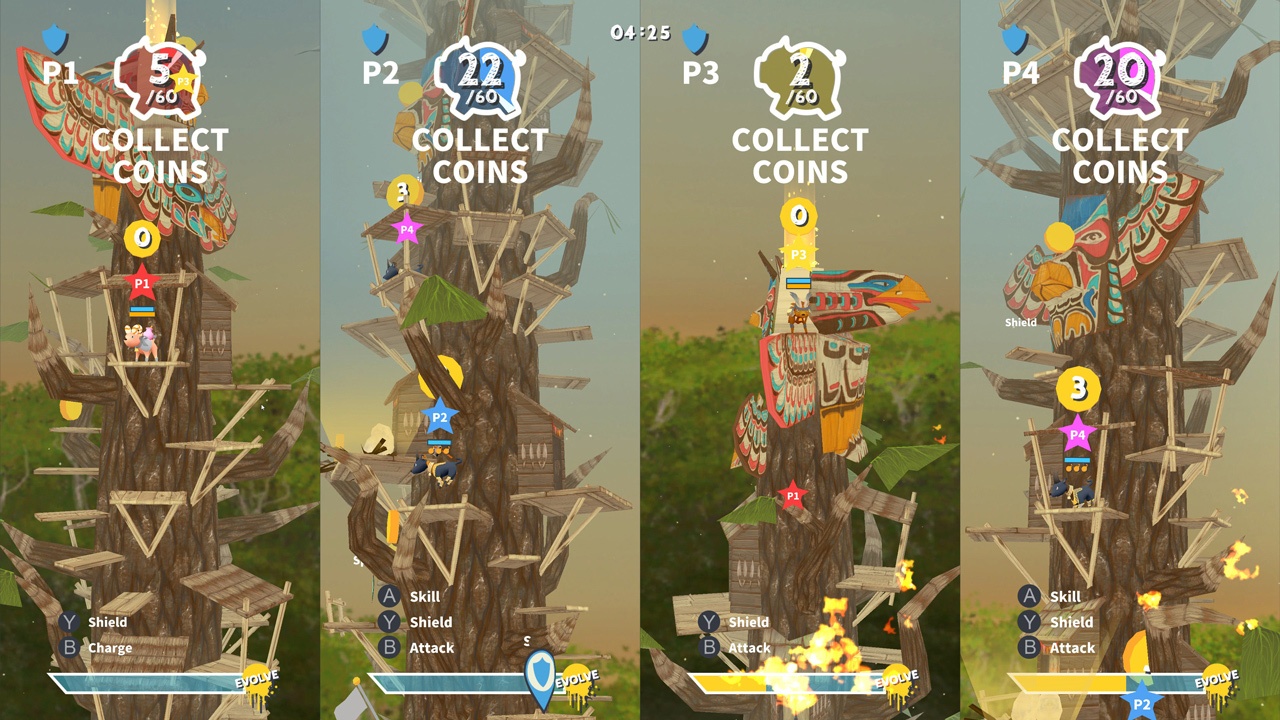 Conceptually and visually, GoatPunks strikes the right chords with the players they’re trying to entice. The game itself is very cute, from the different areas of desert, candy and other types of mountains (I like the Ninja Lanterns), and all the goats themselves have endearing qualities, even the overdone stereotype of the Hipster Goat. When the goats leap about, they have tight and short animations, not overly flailing or gesticulating, so thought went into making the game pleasing to behold but not too invested in arbitrary design. There’s pleasant, forgettable background music as you move about, and the goats have small sound effects that are distinctly not goat bleats. Instead, they’re almost generic little coos and cheers, like if the Minions were kicked up a couple of octaves and their vocabulary was significantly shortened. The game presents well, and the choices of avatars from the beginning are solid, with more being offered (and some variety of customization in terms of colors and additional hats).

Also, GoatPunks did a good job of making sure the limited kinds of gameplay still had plenty of choices within. You can just do a party mode with friends, participate in a tournament, try and attain certain goals and targets or head online (single player only) to goat (is that a verb?) against people around the world. Hopefully, now that Nintendo is focusing more on their online after the Smash Update Fiasco, there might be steps made to help better pair up players for online enjoyment other than emailing friends and trying to coordinate through text messaging. In any case, GoatPunks takes full advantage of Nintendo Online, allowing you to have fun with other players at (hopefully) any time. Plus, if you’re doing local, the game loads up particularly fast, so if you’re hoping to work together and dethrone the Goat King on any tournament difficulty, or just want to be the first to collect 60 coins in Treasure Hunt mode, the game has you covered.

As cute as the game is, GoatPunks isn’t without some minor and preventable frustrations. Things like charging, weapons and speed boosts (as well as the critical shield) are great extras and power ups to the game, making sure that there isn’t simply a vanilla run and done every time you play. However, the most basic idea is one of the most annoying: the movement style. Studio Canvas made sure that the mountains weren’t simple, linear things to climb, so ledges and jumping points exist at angles, both up and down, allowing for goats to traverse strategically in multiple directions. When you’re aiming with the JoyCon, though, it’s very easy to make missteps and end up going the wrong way from where you’d like. Additionally, if you don’t get the angle exactly right, your goat sometime ends up just standing in one spot for a few seconds, which makes you an ample target for would-be goat assassins on high or even more localized goats who’ll butt you off without a second thought. The name of the game is to keep moving, and it genuinely takes a bit for players to get calibrated with the how and why of the movements. Strangely, this kind of prerequisite for patience and trial/error alienates younger kids who might otherwise be intrigued by the aforementioned visual presentation. 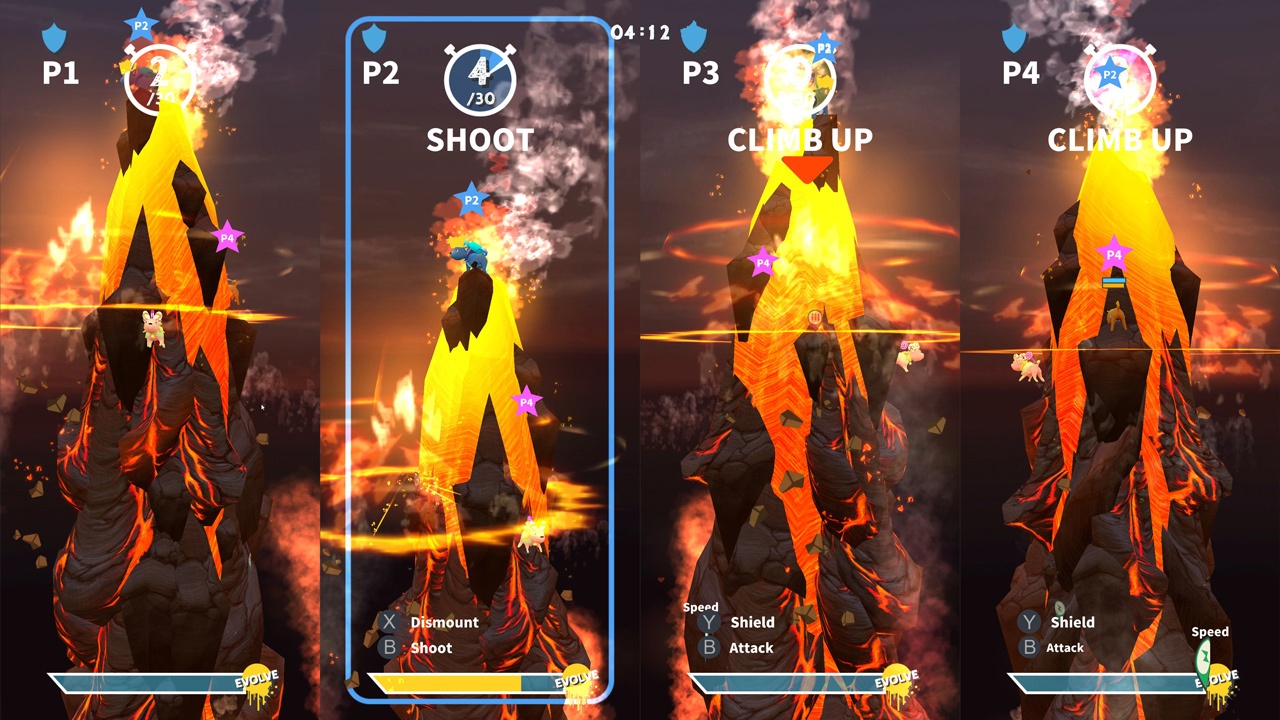 Also, the way the multiplayer works isn’t my favorite. The screen division makes total sense: the objective is always to go up or down, not side to side, so having narrow columns of screen for each player to focus on allows for four equally divided viewing estates, thus ensuring four player equality. Yet, with such a cramped screen and not a ton of differences between the goats, it’s easy to get confused if you look down for a moment or get distracted as to which goat you are. The screen feels cramped even when docked, and I can’t imagine trying to get a four player GoatPunk routine going while my Switch is on the go. It’s totally plausible, and it’s not bad playing with just one JoyCon, but I’d highly recommend having a secondary screen to connect to so that you aren’t overwhelmed with movement and distraction.

GoatPunks is a great game for people who like to play with other people. It’s cute, it’s limited enough, the concept delivers well and you can figure it out in a few minutes and perfect it five minutes after that. If you want to really rely on the online aspect, you might get lucky and have a ton of people to connect to, and so you can enjoy the hell out of being the GOAT at any time of day. However, for players who prefer a single player experience, there’s very little to be had here, and the milk dries up fast when you’re suckling for one. Consider if you can get a friend or two to get onboard with you, then skip around to your heart’s content. Otherwise, if you’re a herd of one, it’s time to move on to greener pastures.

GoatPunks is a cute and simple party game, and might find regular replay for the right people with the right conditions.