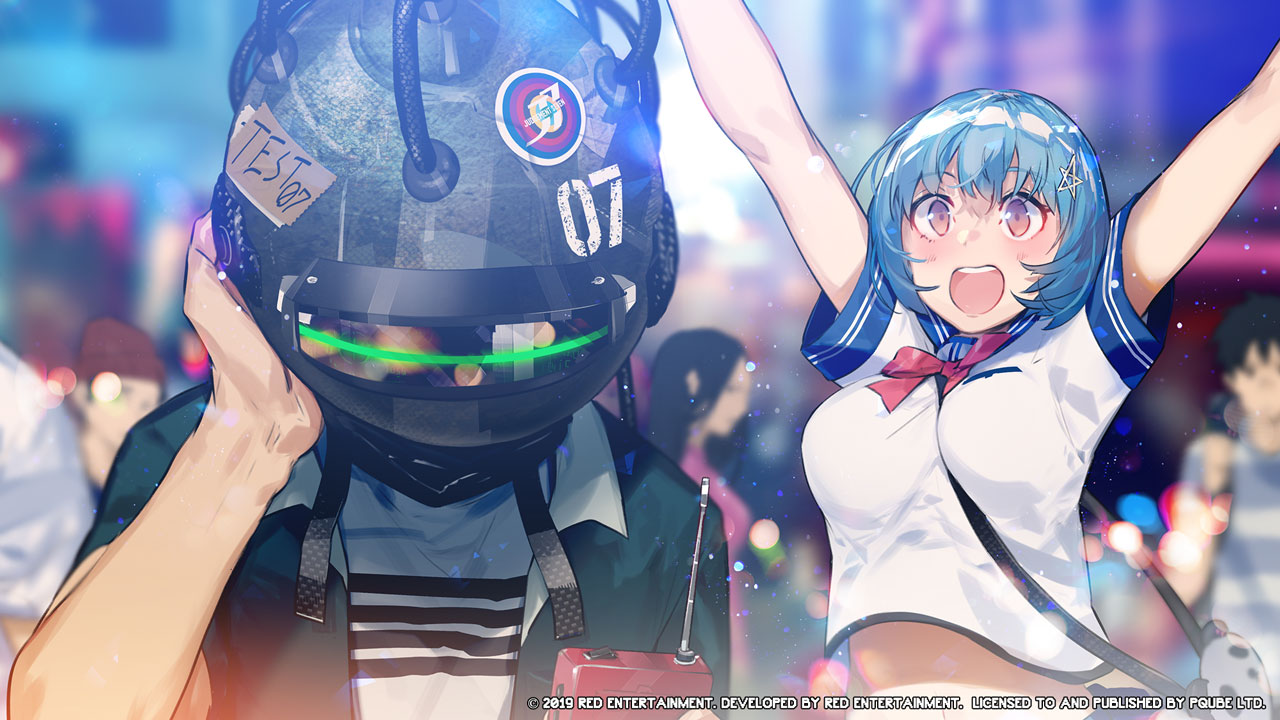 So far, with visual novels that have come to the Nintendo Switch, there’s been a good amount of variety in terms of what players can choose from. There’s been some truly fantastic and successful pieces that see their first port to the Nintendo system, a fair number of romance simulations to play for both sides of the table, and, naturally, fan service far beyond what most people would consider “tasteful.” Still, Nintendo has proven that they’re welcoming, within reason, to having what was originally seen as a niche genre to run rampant on their console. The sales of Japan in terms of hardware and digital downloads probably support those releases, but it’s still a pleasant surprise. So it shouldn’t be a huge shock that a new visual novel, coming to us from Red Entertainment, would see a console release, even on the Switch, before it reaches the Steam storefront. Especially not when a visual novel manages to tick so many of the trope boxes that players would be eager to indulge.

Our World Is Ended is the story of Judgement 7, an experimental game development company, and of its part time worker, Reiji Misaki. Judgement 7 has had a series of games that have done very middling, with one exception that no one ever talks about. The lead developer, Sekai Owari, believes that this next project, World End Heaven, will be the greatest success, and is backing it with his own VR/AR (augmented reality) hardware/software, called W.O.R.L.D. Reiji is testing it out one day on the streets of Asakusa when something glitches and he sees apocalyptic visions of the future, though no one can explain how or why. Reiji meets up with his team to discuss the future of the company, and then attempts to head on home, when the most peculiar thing happens. It quickly becomes apparent that Owari’s creation is even greater than he realized, and the team of Judgement 7 must work together, along with some mysterious and sinister outsiders, to decide if this is the end of the world…or the beginning of something new altogether.

Our World Is Ended is a true dynamic visual novel, with a massive amount of read and spoken text, which Red Entertainment claims hits the delicious 40 hour mark for a lot of VN deep divers. Throughout the game, you’ll occasionally be presented with “Selections of Soul,” which are unique ways of choosing responses and input to characters in a timed, limited fashion. While the Selections scroll by the screen in a manner that’s similar to scrolling comments on video streams, a player may only get a second to decide one before he or she ultimately is forced to choose a singular option, which isn’t always the one you wanted to say. It’s a clever style that makes the player question what they did or didn’t say and demand replay value, which is easy enough to get to: the game keeps track of all read lines, and new games will allow you to skip directly to choices and unread dialogue so that you don’t *need* to slog through everything all over again in order to find out what you missed. And, in many cases, there were moments where I just wanted to see the new stuff and definitely fast forward through the old. 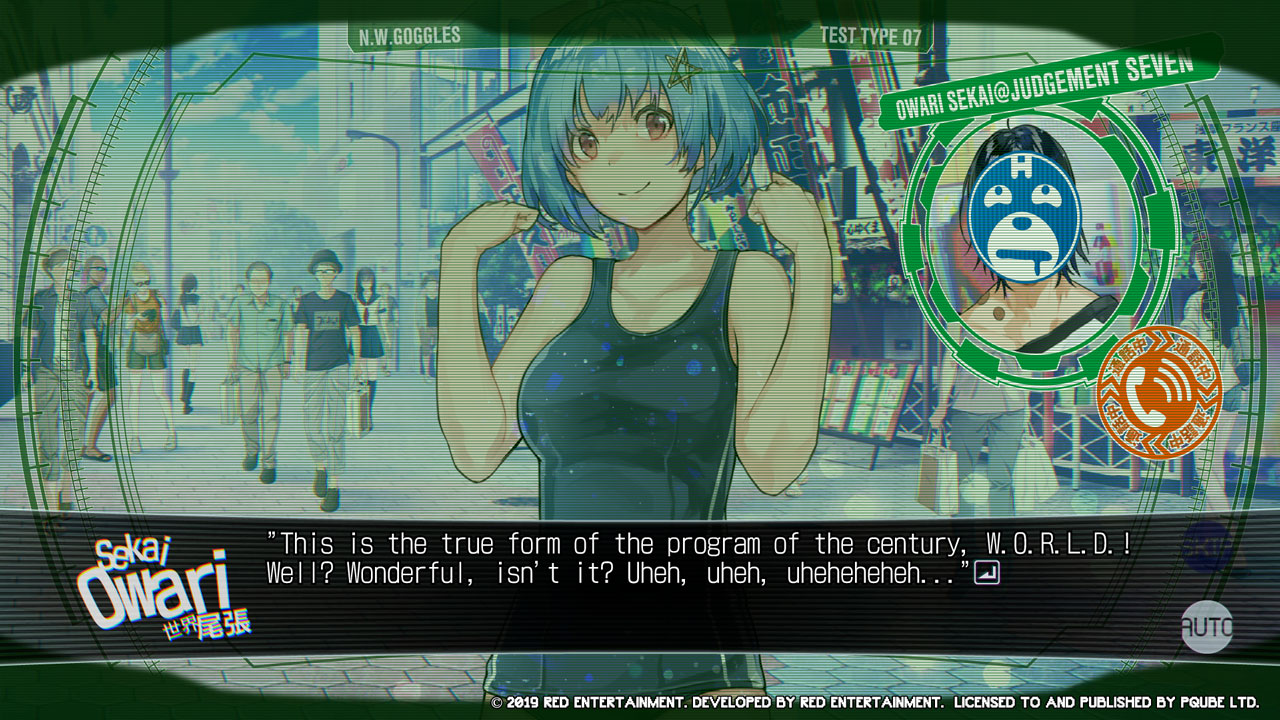 Taking apart Our World Is Ended on a technical level, I gotta say I’m impressed with the level of atmospheric design and aural shaping that went into the creation of this game. The voice talents that were hired for the game are top notch, including former actors for big visual novels like Muv-Luv and landmark animations such as The Melancholy of Haruhi Suzumiya. While I didn’t always like what was being said (more on that in a moment), the director was able to help each persona really shine through and match their character, from the bubbly and blunt Yuno to the unbalanced and often perverted Sekai himself. While the text can often be very flowery and overlong, it’s worth it to hear the solid deliveries that range from screaming proclamations to muttering, personalized monologues with another person barely in earshot. They wanted to capture the best of both a game and an animation, and I would say there was wild success in that field.

Additionally, choosing Asakusa as a backdrop for Our World Is Ended was a smart move on the part of the developers. While a very recognizable and identifiable part of Tokyo, people usually want to focus on the bigger tourist traps (Akihabara, Roppongi, Shibuya) to set their games up within, and it’s been done to death (and pretty well with many a title). By having a place like Asakusa, players who’ve visited the historic area will be able to easily spot temples, shrines, and familiar streets that make up the township. When the game deviates in some places by both swapping out actual business names and, in a few instances, leaving the premises for other walks, everything is still circling back to Asakusa, which adds to the air of detail and planning that went into the game. It also allows the character models (which very infrequently chance much more than a pose or expression) to function on a higher level, allowing the world to shape around them even if they themselves don’t alter much. I wonder if that was intentional to mimic what’s happening in the game’s plot, or just coincidence?

The rub comes from the game itself, and, more specifically, the players within. Our World Is Ended presents an incredibly cool concept in terms of science fiction technology and a potential future dystopia that we may find ourselves in at some point, but a lot of the valid talking points are shouted down (almost literally) by the cast of characters themselves. You’ll be playing/reading for several hours before you reach people who take the situation more seriously than the people who’ve created it, and, even then, you never fully get away from the crew of Judgment 7, who are all massive, intentional stereotypes. You’ve got an ill-tempered sound designer who’s always drunk, a literally huge otaku who talks like he’s in an epic novella, a borderline murderous gothic lolita and the head designer, who is unwashed, ill kept, unabashedly focused on erotica and secretly a coding savant, though he doesn’t know it. Combined with the high schooler with massive breasts and a tsundere maid that you meet later on, and it ticks all the boxes you could imagine. We have a more diverse cast coming up later (including the pivotal and honestly best balance of Girl A/Reina), but things get mired in the details of who we MUST deal with throughout. If Judgment 7 could stop fighting, fantasizing and tangenting every eight seconds, the whole book might be done in ten hours, tops, with plenty of great story anyways. 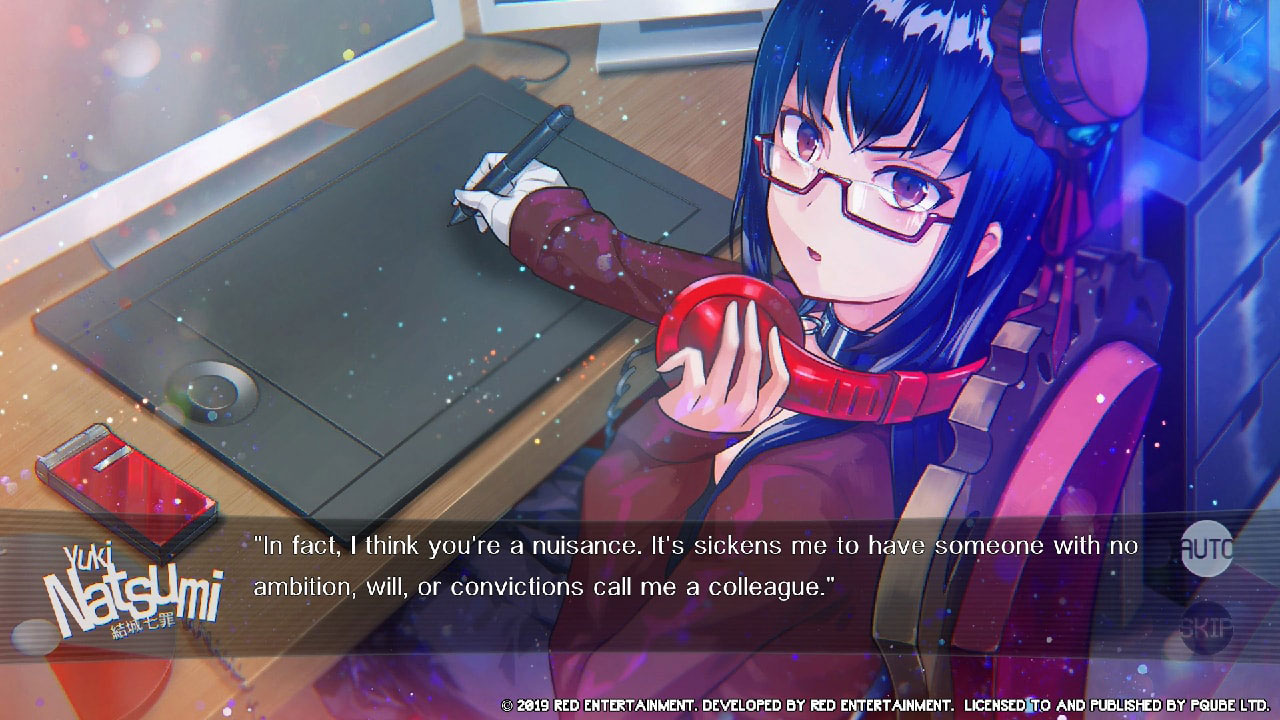 But here’s the craziest part: it all still works. Anyone who’s spent time in anime that isn’t firmly mired in a singular element or style understands that sometimes, the off-kilter characters keep it moving and interesting. If Keiji just picked up Natsumi and piggybacked her away from danger, that’d be fine, but adding a few extra pages of thinking about her breasts on his back, her realizing this, and the awkward exchange of it all makes it authentic in the minds of devs and fans alike. Our World Is Ended keeps the game from getting too bleak, heavy-handed or serious because of WHO created this situation, not what or where. It’s a merry band of idiots and impulsive idealists who have put everyone in danger, and they need to fix it while learning a bit but not actually changing who they are. The fact that the game ends with some pretty clear homoerotic humor floored me, and I praise the game for that. It’s a grand story, and people who are looking for along the Science Adventure style are going to be miffed, but it’s incredibly well done in terms of quality, humor and retreading of what we expect of anime.

Our World Is Ended is a pretty massive adventure, and it’ll take a while to read, but the menus are fantastic and the interface with the Switch is quite good. It’ll easily take you a couple of weeks, maybe less with dedicated Switch use. If you’re looking for an original, entertaining and occasionally heartwarming story with loads of oddball humor, perverse jokes and random references (I can’t believe Tatiana’s last name is Sharapova), then you’ll find this World opens brand new doors for Switch visual novelists.

Our World Is Ended. Review

Our World Is Ended does players a solid by being one of the better blends of crazy storytelling, ballistic humor and excellent pacing between the two.