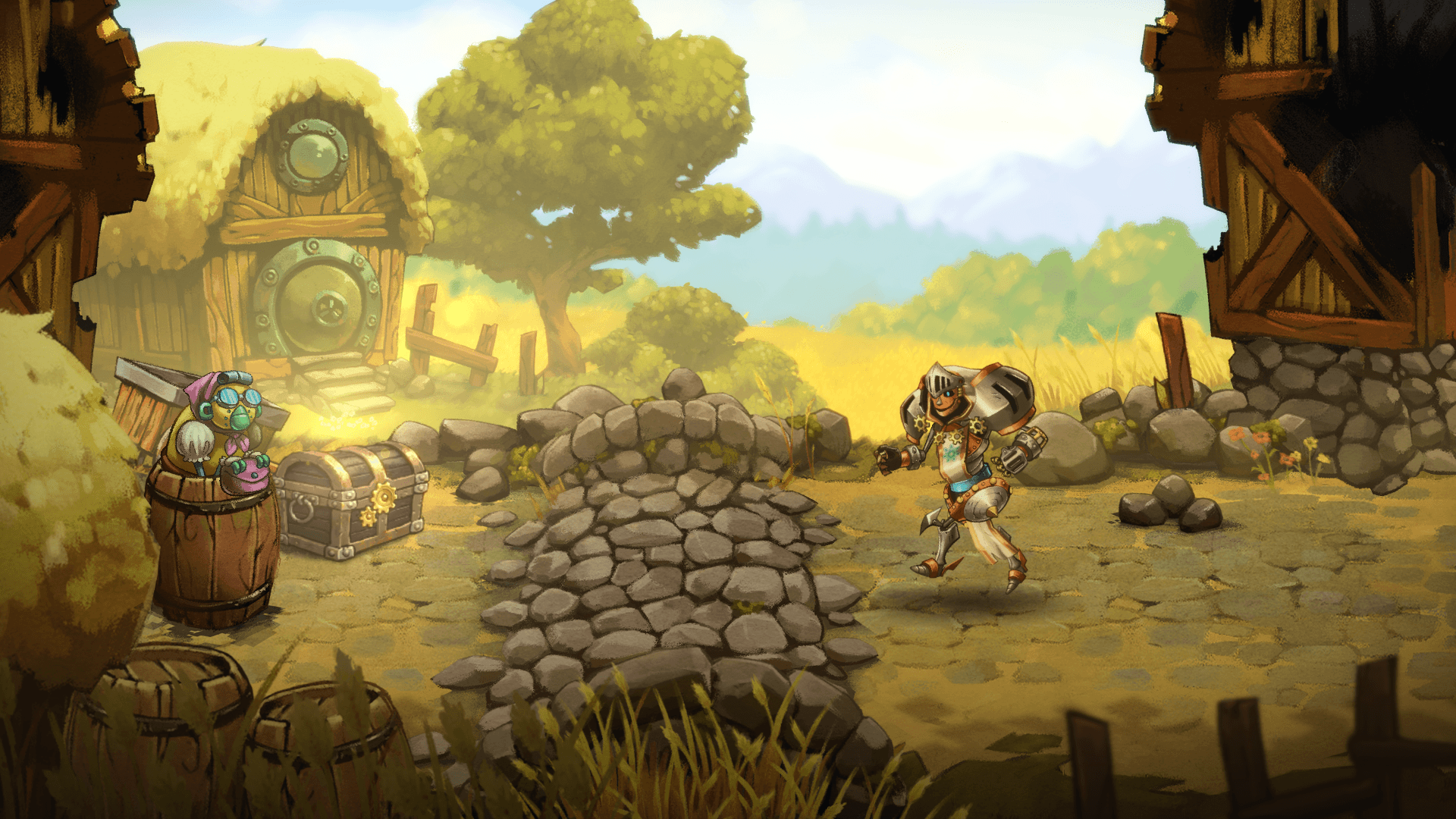 The folks at Image & Form must have some really interesting and creative minds kicking around, because the realm that is Steamworld is always a fascinating one to me. Starting off as a rather innocuous tower defense game, we’ve seen the evolution of this “steampunk with less meat” setting go from deep in the past to far in the future and everywhere in-between. Despite the lighthearted puns, clever banter and fanciful characters, you can really find some deep lore and history to the games if you pay attention and you can piece together this overarching mythology by playing the games and taking notes. So for fans who’ve already invested heavily into the storyline, they’ll be pleased to know that, despite taking some very safe but interesting choices, the latest instalment of the Steamworld games brings plenty more to the tale table, especially with some great twists and reveals.

Steamworld Quest: Hand of Gilgamech takes place in a medieval style period of Steamworld, in which swords, alchemy and good versus evil are all central. You play three characters who all travel together in one pack, and they are your heroes for the duration. Armilly is the feisty and excitable knight-to-be who cannot contain her enthusiasm and, as a result, sometimes appears a bit daft. Copernica is an alchemist/wizard who is most intent on getting some serious ingredients to mix helpful potions and is openly exasperated at having to deal with Armilly’s exuberant personality. Galleo, a craftsman and basement dweller, is a bit reluctant to join in on the quest, but, after the events of the second chapter, falls into line with everyone. There’s some kind of evil army marching across the land, calling itself the Void and given that they introduce themselves by burning down a village, it’s safe to say they’re not the nicest of folks. Armilly’s gang decides they need to do something about this, and they set off to stop whatever dark Lord is commanding this destruction and to hopefully follow in the footsteps of Gilgamech, the remembered-but-forgotten hero of the realm. 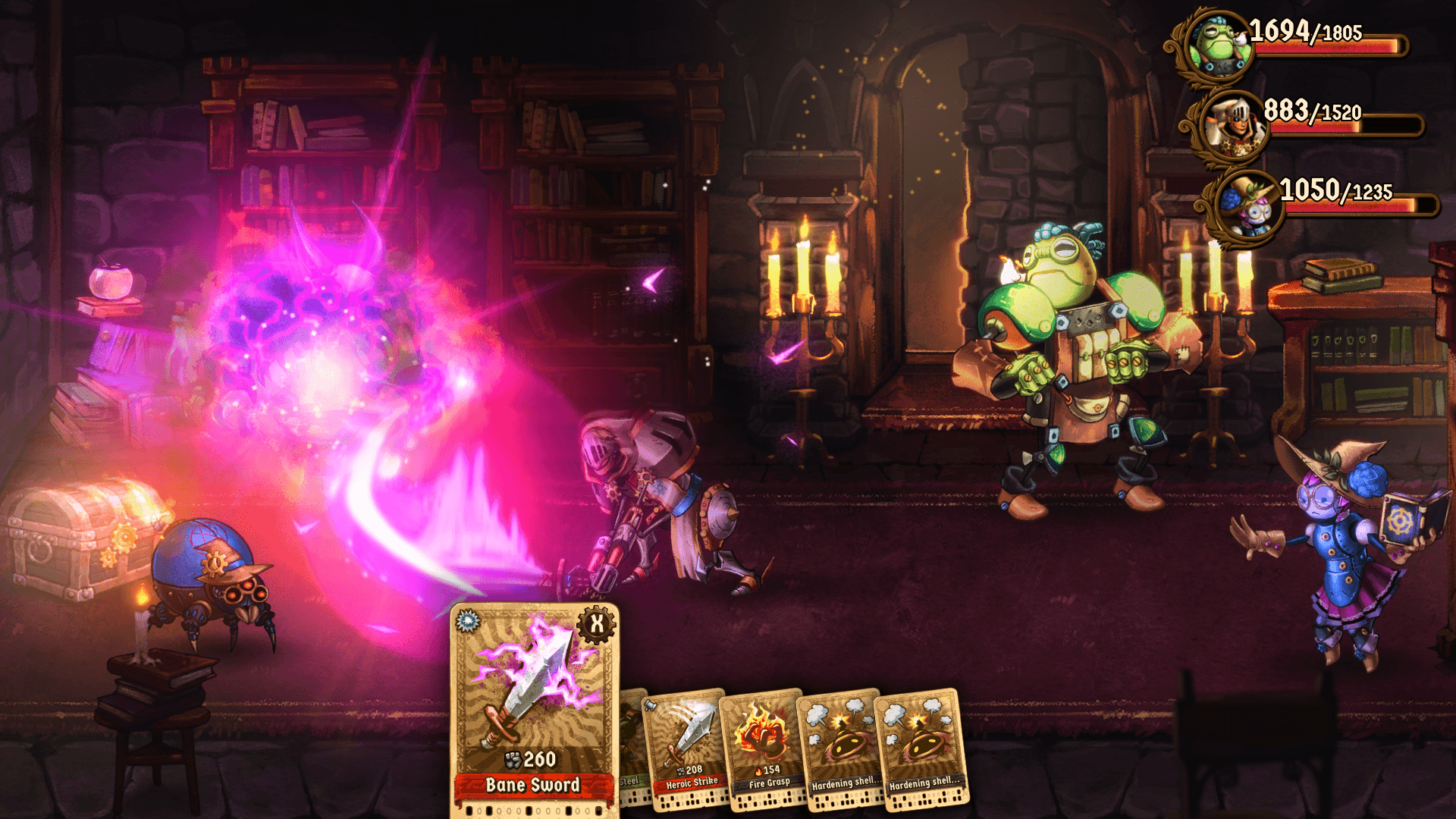 Steamworld Quest is in an interesting situation, as it’s described as an RPG with deck building mechanics. The primary focus of the game comes down to two elements: exploration and combat. The former is set up in an odd way that sort of feels like it defies the modern idea of “role playing game.” Far from being an open world or allowing the player to try and feel their way towards their goal, each “chapter” of the game is divided into multiple rooms that are connected by inflexible tunnels, such as doorways or screen edges. Theoretically, you’re able to get to the goal for each chapter by simply walking along and choosing whether or not you’re going to go the extra distance and explore to find additional treasure, encounters and such. Once you beat a chapter, you have the option to go back and re-play a chapter to grind against enemies or find the rest of the secrets that you may have missed. There’s a percentage meter at the end of each chapter to let you know how well you’ve done, and, that way, you can go back to discover things you may have missed, such as healing items or extra cards. Oh, and each level has a save point that does heal your party completely BUT also respawns all enemies, making it fantastic for those looking to grind up their levels and devastating for people surviving by the skin of their teeth. I like it!

As for the combat, Steamworld Quest asks the player to work out a deck-building mechanic, initially starting each character with only eight cards they can bring into battle apiece and introducing additional cards as the game goes on. The mechanic balances itself by requiring you to use smaller cards to charge up power in order to execute larger cards, so you can’t just fill yourself up with Copernica’s most powerful spells and call it a day. There is the additional bonus of doing a hero chain as well: you can only use three cards per turn, and, if you use all cards for a single hero, you get a bonus fourth attack that can seriously help out. Copernica’s Mass Barrier, which generates shields on everyone, is invaluable, whereas Armilly’s extra strike can be the difference between another round of combat or not. When you purchase additional weapons from the traveling shopkeeper, your extra attack can change, so it’s more than simply boosting your HP, attack or magic points by upgrading the equipment. I mention the Mass Barrier by name as it is invaluable right up until about chapter 10, when it stops preventing as much damage as you’d like, but damn is it an impressive thing to have off the bat. Additional cards can be found and, later on, purchased, and you get to spend an undue amount of time trying to figure out what’s the best balance for everyone in terms of healing, attack, charges and fast strikes.

The deck building of Steamworld Quest is interesting, and it helps to expand and grow as the game does. I thought this title would be over in an afternoon after I cleared the first two chapters in under 30 minutes, but the game does open up, making the maps bigger and more complex with different enemy types and treasures. You have to take a moment to make sure you’re swapping in and out the cards that you need or want for combat, and boss fights will often put your deck mastery to the test. Players can, theoretically, go the whole game without swapping out much from their primary decks, but laziness and invested timelines come with a cost. Players who put a lot of thought into deciding what cards will and will not work end up agonizing over the right combination of strikes, defenses, heals and elemental weaknesses, which change from enemy to enemy, area to area. Players who just rush through without much thought end up missing the opportunity to make battles significantly easier on themselves, and, moreover, disrespect the true roleplaying element of Steamworld Quest, which is creating a combat deck that’s true to your play style versus what the game simply deals you. Galleo is rather unbalanced at the introduction of his character, but taking time to weed out the more obtuse cards and focusing on his strengths of healing and blunt force trauma really help out in the future. 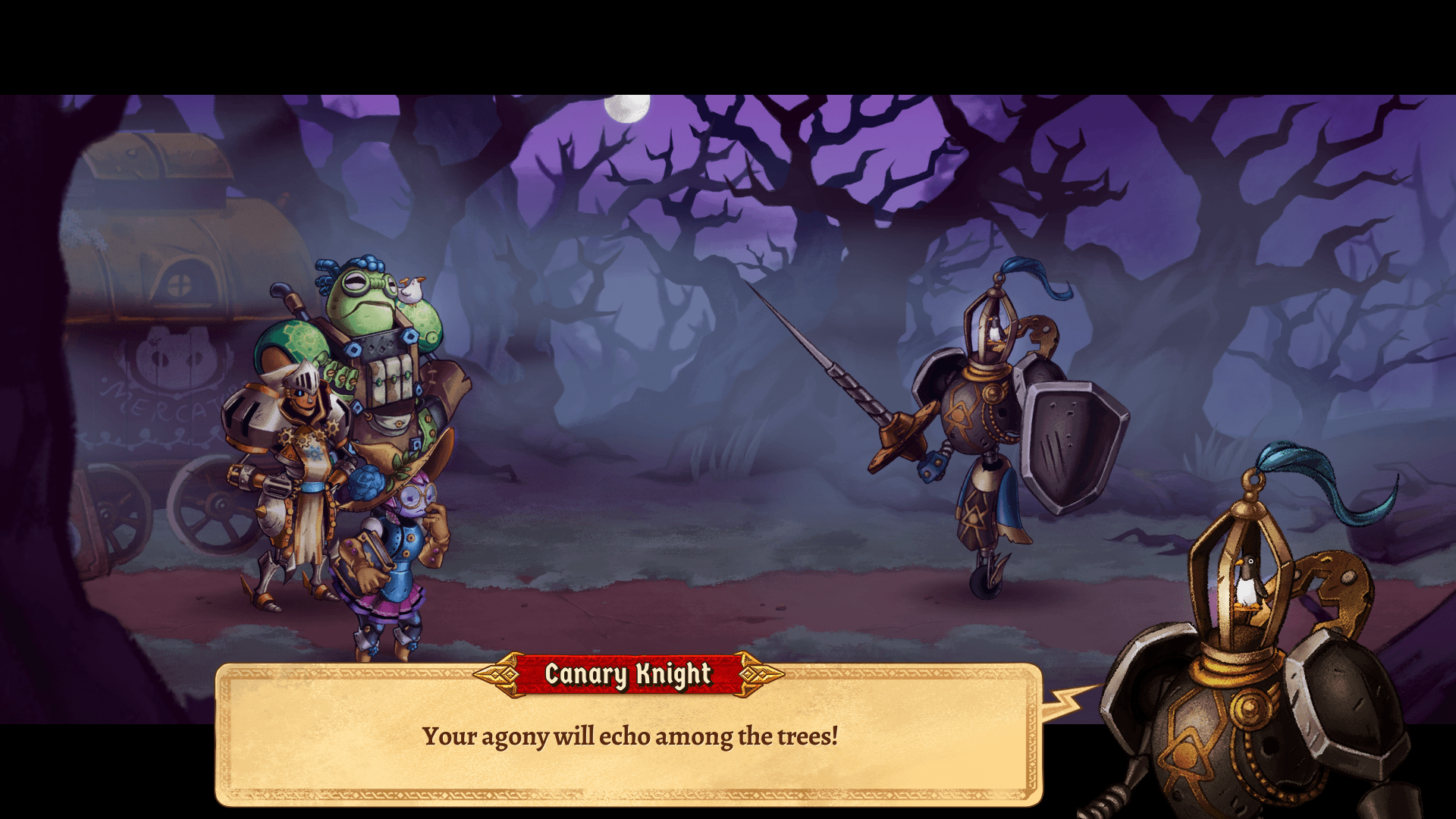 Boss fights are an integral part of any RPG, and Steamworld Quest is no different, though it feels strange to consider them in a separate category. Each chapter features at least one major boss battle which is usually the end point of the chapter, though, granted, not always. The bosses are hallmarked with a massive boost in hit points as well as additional skills, such as being able to summon underlings to manage the side distraction. Bosses are…they’re sort of almost an annoying additive to help bookend the chapters instead of just having the chapters end in storytelling. They’re never particularly difficult to deal with (with one major exception late in the game), and they often require you to dance in the same patterns time after time in order to wear down the boss and reach success. I think the process of having the save point heal you but respawn enemies is meant to intimidate, but it just makes things easier in terms of successfully having an overpowered set of fighters to deal with bosses who’s biggest claims to fame are elongated HP bars. If you’ve ever played Earthbound, you know that Frankie is easily conquered by defeating Sharks until you’re overleveled, which takes almost no time at all. The same applies here, but over and over again. Keep at least one spell in Copernica’s pocket to block attacks and don’t waste your vials on smaller fights and you’re on easy street.

I don’t feel like RPG is the right term for Steamworld Quest, but I’m hard pressed to consider what else it would be. It’s not bombastic enough to be an action game, and it’s got enough story and dialogue to distance itself from a traditional adventure game. The writing and effects of the characters are marvelous and honestly worth slowing down and appreciating from the very beginning. Everyone knows their position in the story, from the cowardly bot hiding from the fire to the purposefully dull-witted enemies that spout off cliche one liners about the Dark Lord or whatever. I genuinely enjoy Armilly’s enthusiastic approach to the world and to prove herself to the Guild, despite the remaining member(?) of the Guild rebuffing her while simultaneously sending her on a quest. Add that in with a refined art style, and this is probably the best of the Steamworld games so far in terms of presentation. It’s got some of the pomp and circumstance that Dig 2 contained, but it’s got the varied design and minor edge that Heist had, plus it stands quite originally in the game world and the delivery method of all the information and gameplay. I suppose, in the sense that I am literally playing a role in this world, that it’s an RPG, but that still feels like I’m forcing the term.

Overall, Steamworld Quest: Hand of Gilgamech does what it sets out to do and does it well. The punch cards are clever and enjoyable, the story is interesting and becomes downright fascinating after several chapters, and it feels right-at-home in the chimera of the Steamworld Universe. You can burn through the main story in probably about 15 hours, potentially less if you’re hell driven on beating bosses without upgrading, but players will want to go back and snoop out all the secrets and additional treasures. Steamworld Quest has elements of delight and excitement that are sometimes elevated by the combat, while occasionally getting bogged down in repetitive actions that vary significantly between large chapter jumps, but not terribly between shorter ones. While I think I would have liked a bit more of an open feel to the game, there’s nothing inherently wrong with the semi-linear nature of the design, and it does prevent Armilly from wandering away too far and getting everyone lost. And what does this mean for the future of the Steamworld games? Well, I think we can agree that the answer is all in the cards.

Steamworld Quest is charming, engaging and works the card combat mechanic well, and should be plenty for Steamworld fans to jump into immediately.