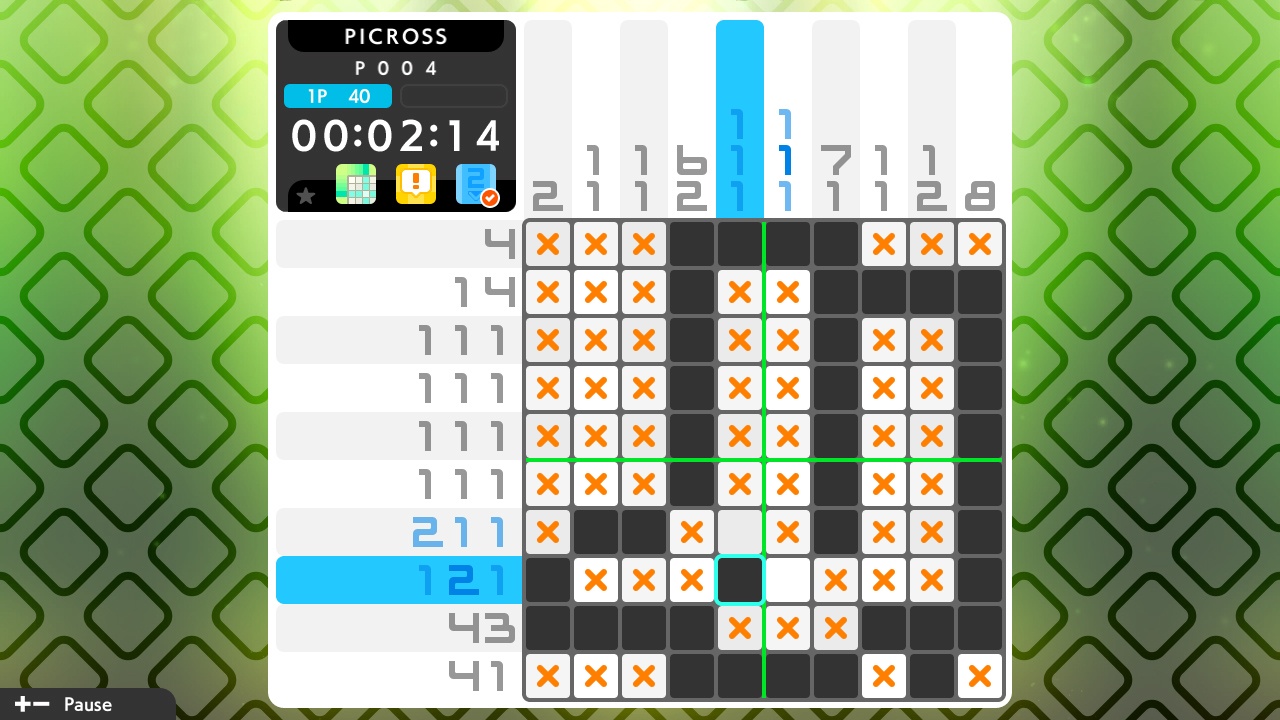 Nonogram puzzles have been a staple on Nintendo consoles since the mid Nineties, ever since Mario himself started the virtual run with Mario’s Picross way back when. Over the years, the popular Japanese puzzle has spread across other IPs and formats (such as mobile), but it’s always had a home on Ninty’s consoles, especially in handheld form. Picross S3 is the latest instalment, and it continues the legacy with varying degrees of success.

The whimsical logic puzzles haven’t changed much over the years, and the same can be said this time around. Each puzzle involves successfully choosing which boxes are coloured in and which ones aren’t, eventually forming a picture if the correct squares are chosen. It’s a little like a picture form Sudoku, using simple maths and critical thinking to make the correct decision. A normal Picross run will involve shading in the correct squares, leaving an appropriate number of boxes empty in the grid depending on how many need shading, as displayed at the side of each row or column. You can also mark which ones you’ve worked out need leaving empty. Many of the easy puzzles aren’t much of a challenge, but later on the game requires careful planning and occasionally, a little guesswork. 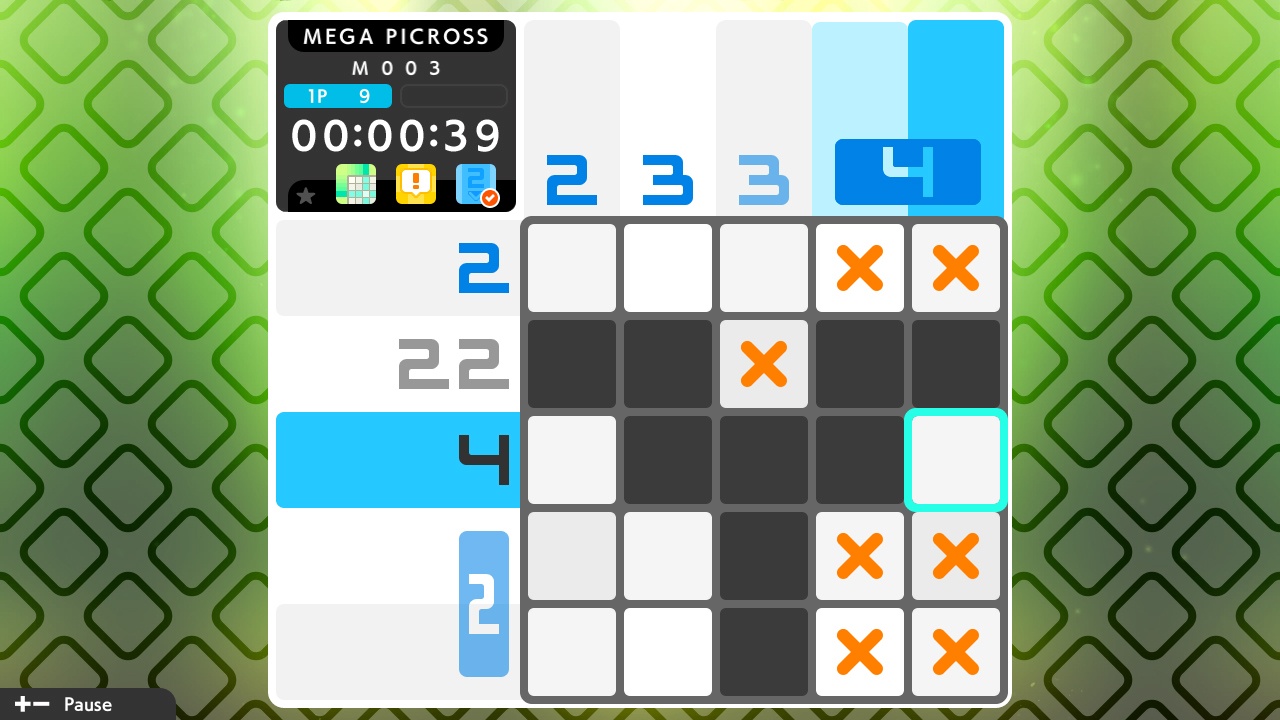 In the basic mode, the puzzles start simple, for example, picking the correct squares on the tiny 5×5 grid creates an apple, but the grids go all the way up to giant 20×15 beasts, where you create more elaborate scenes and items. This is your usual run-of-the-mill Picross affair, and if you’ve played a Picross title before, this is the area you’ll spend the least amount of time in, especially as a lot of the puzzles create the same items that many previously games have had you create. It’s also quite easy, and even the larger puzzles don’t have the same difficulty curve that some previous instalments have had. That being said, if your after a challenge, you can always try to beat your high score or finish all the levels without making a mistake.

But S3’s biggest draw is probably the inclusion of several great Picross variations. Mega Picross often overlaps some of the things you create in other modes, but offers a far deeper challenge. This time around, the grid includes numbers that could be in one of two rows, meaning you need to work out which row or column the number is spread across. It’s much more challenging but really satisfying to complete. Another mode is Clip Picross, which is essentially the same as the normal mode, but each grid creates part of a larger picture, essentially making for a mini jigsaw.

Perhaps the most exciting inclusion is Colour Picross, a long-awaited feature for returning players. Instead of shading in the grid with black boxes, the grid is filled with various colours that can touch, so there’s not necessarily gaps between each block. There aren’t many Colour Picross grids, but I had the most fun playing through these and it was the only time I felt I needed to make use of the hints the game offers you. 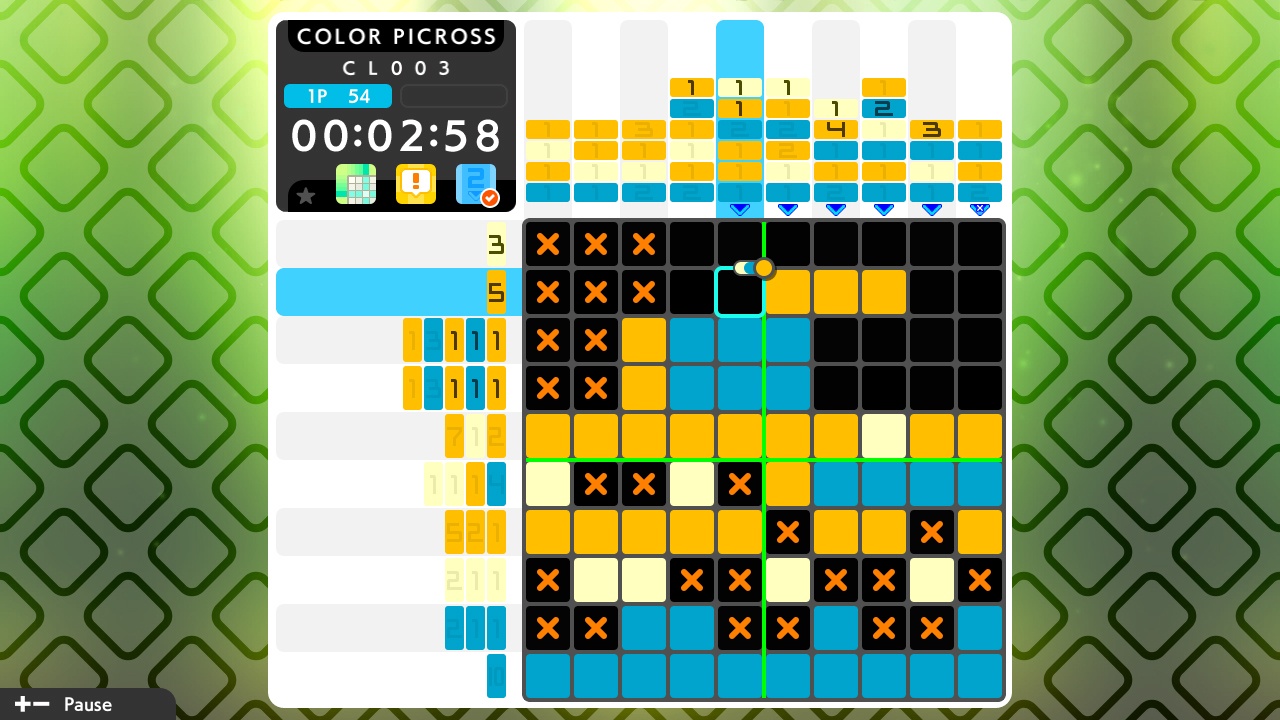 While the package boasts plenty of puzzles and content, I can’t help but feel that if you’re a returning player, then there isn’t much here for you. Many of the grids feature samey designs as you’ll have previously experienced in other titles in the series and it’s still disappointing that the completed puzzles look nothing like what you’re being told you’ve created. Whether it’s a sandwich, a tree or a dog, unless it specifically said underneath, you’d never guess what you had made; the layoff always feels cheap and lacklustre.

Unfortunately, if you’re waiting for S3 to be the series’ first Switch touchscreen entry, you’re going to be disappointed. It seems really weird that, with several Picross titles on the Switch now, the touch screen hasn’t been incorporated into any of them. It feels like such a useful tool is baffling to exclude, especially with the larger display of the Switch compared to say, the 3DS, which was far more prone to accidental touchscreen presses. The actual controls are fine, though, but at this point it feels like we have a Picross title for the sake of a Picross title, rather than pushing the series forward.

Picross S3 is an easy-going, enjoyable puzzler and a solid entry into the franchise. If you regularly play Picross titles, whether there’s enough to warrant you coming back this time around is open for debate, but if you’re interested in getting started this is a great, place to start.

A great entry point for new Picrossers, S3 is solid, but doesn’t do enough to push the series forward for returning players.