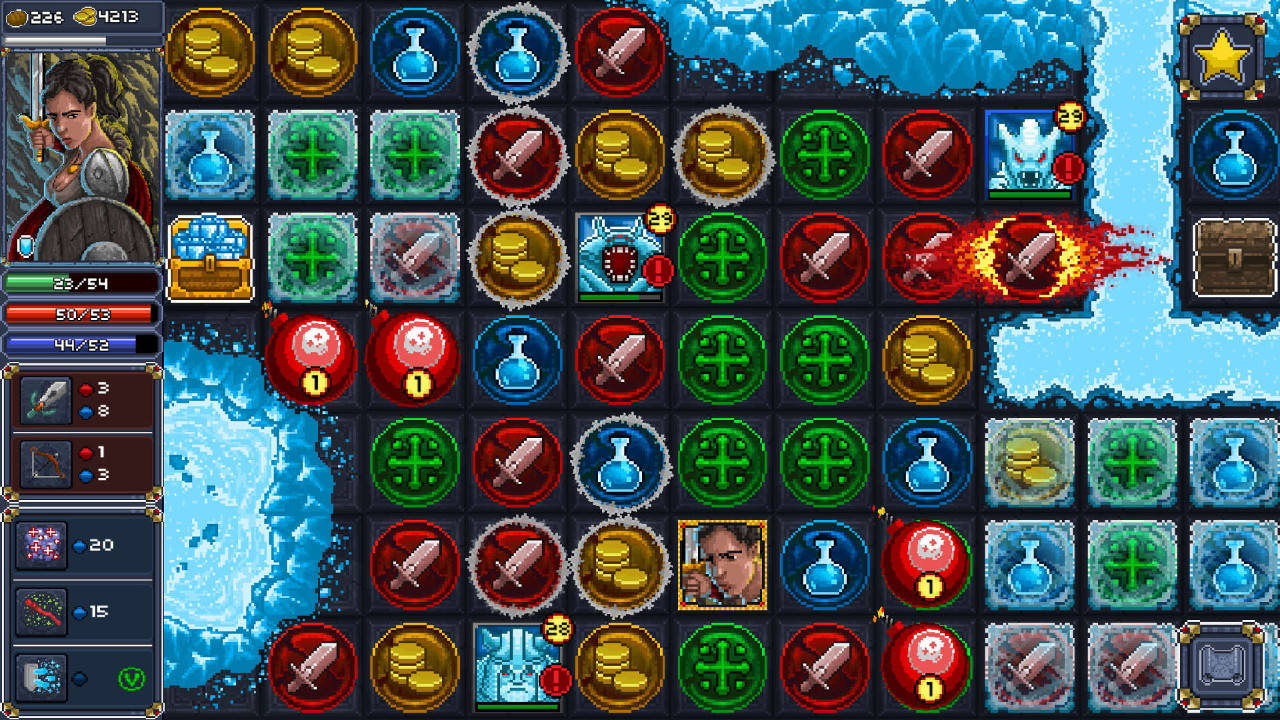 The whole premise of a match-3 style puzzle game being laced with an element of role-playing is nothing new. It’s been done quite successfully before with a myriad of games within the Puzzle Quest Series. The same can also be applied to role-playing games in general. In essence, they generally follow a similar blueprint of good versus evil, the epic journey and a series of quests which need to be fulfilled in order to become the overall hero. These days, both puzzle and role-playing games need to bring something different in order to stand out from the crowd, be it a more expansive open world, a wider range of puzzles or, as with Puzzle Quest, an amalgamation of genres. Although similar in look, Ultimate Games’ latest title builds upon the mechanics of a match-3 puzzler, as well as brings a layer of role-playing and dungeon crawling in Darkest Hunters, out now on the Nintendo Switch.

At first glance, it is easy to assume that this is simply just a match-3 puzzler. However, you couldn’t be further from the truth. In fact, the main component here lies within its role-playing mechanics, with its gameplay elements lying within the background to bolster the journey within. To begin with, there is a story here and a journey on which to embark. In the usual role-playing trope, you are a hero, or can even be classed as a set of heroes, who embark on an adventure to explore a series of locales and dungeons in order to the rid the world of the evil that lies within. In terms of story-telling, it’s a very basic premise at work here, but it works in what it is trying to achieve. Namely, the pursuance of giving the player a reason to play, as well creating a sense to finish the journey upon which you have begun.

From a series of world maps, you progress through each land, level by level. Each of these sub-levels, presents you with a dungeon-style layout that is filled to the brim with a series of tokens that represent various items, as well as a colour-coded guide on which to play. Each of the tokens basically represent combat ability, health, gold and mana; each of them co-ordinated with the usual tone of colours in red, green, yellow and blue. Where this game differs from your usual match-3 mechanic, is that you don’t simply match-3 to progress. Instead, you draw a path for your hero to traverse along; its trajectory decided upon by joining up adjacent tokens of a matching colour, or type, until your path can no longer continue along the selected route due to the surrounding tokens no longer matching your selected colour. 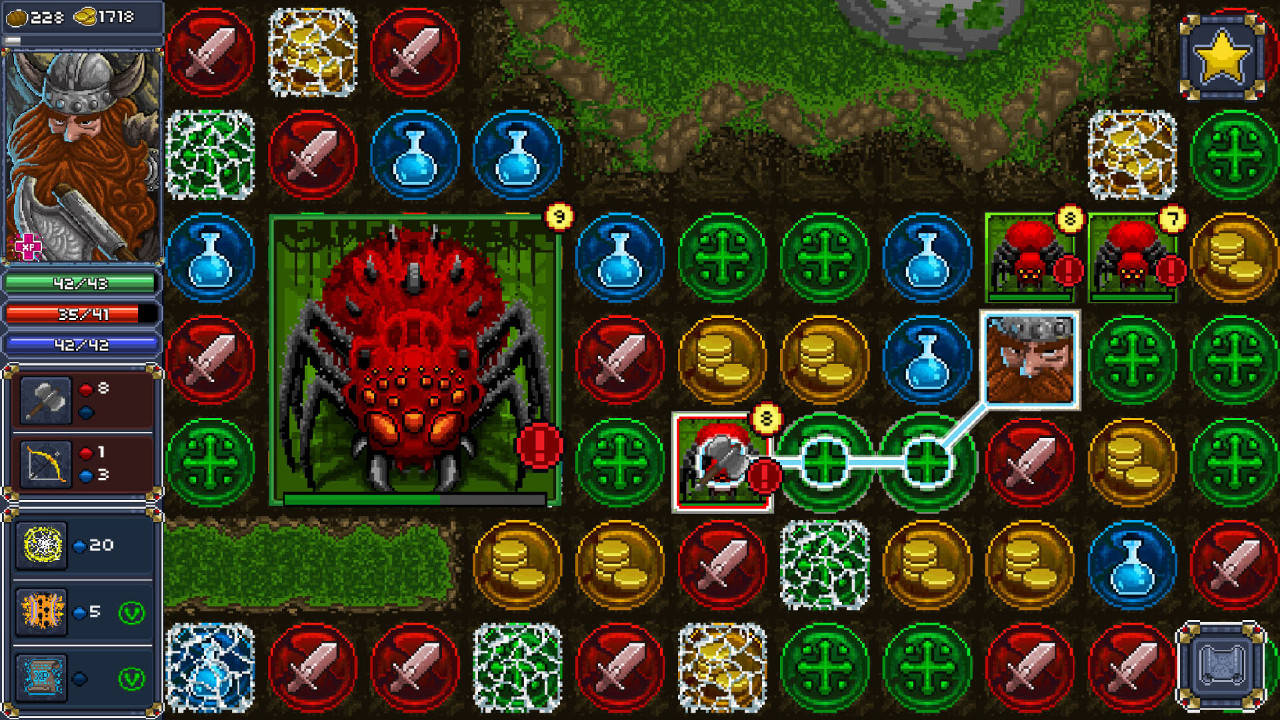 Once your path has been laid out, the hero then follows your drawn trajectory, collecting the tokens in order to maintain their levels of combat effectiveness, health and mana reserves. In essence, you guide your hero around the map by linking tokens in order to traverse the level towards a waiting exit. However, you’re simply not alone within the corridors of your current location. Further tokens also inhabit your immediate area, from a variety of monster-types to treasure troves and chests, narrative notes to add a background to the story element and a few other surprises that can alter the layout of the landscape. It brings a tactical element to the gameplay that is determined by a number of factors. For instance, accruing gold allows you to build monetary funds, opening chests grants you items such as weapons and armour and combat forces you to replenish your reserves in order to survive.

Should an enemy encounter leave you with low health, then you must draw a path that enables you collect as many green tokens as possible. The same applies to weapon efficiency, red tokens and mana reserves, blue tokens. However, each level isn’t simply a task of getting from A to B and finding the exit. A series of tasks, or quests, also need to be fulfilled in order to collect stars so that you can unlock further levels. These can range from destroying a specific amount of a certain enemy types, finding a secret that is hidden with the dungeon or executing a multi-kill with a skilful level of tactical play. Some of these quests may be fulfilled with one playthrough of the level, others however, will force you to revisit the level in order to attain the star associated with it.

Not only do these stars allow progression, but reaching certain milestones per level also rewards you with monetary gains and treasure chests. These soon become an important element of the gameplay, as inbetween each of the levels, you can visit the local town where you can interact with the townsfolk by buying weaponry and armour, purchasing spells or simply changing your hero. It’s here where the role-playing element of the game come into play. As well as attaining armour and weapons, some of which are required with elemental abilities, long-range attack capabilities and board-altering magic, you can also upgrade equipment and characters through XP progression and spending your reserves of gold. This in turn increases your health, damage and mana reserves, thus making your hero more powerful. 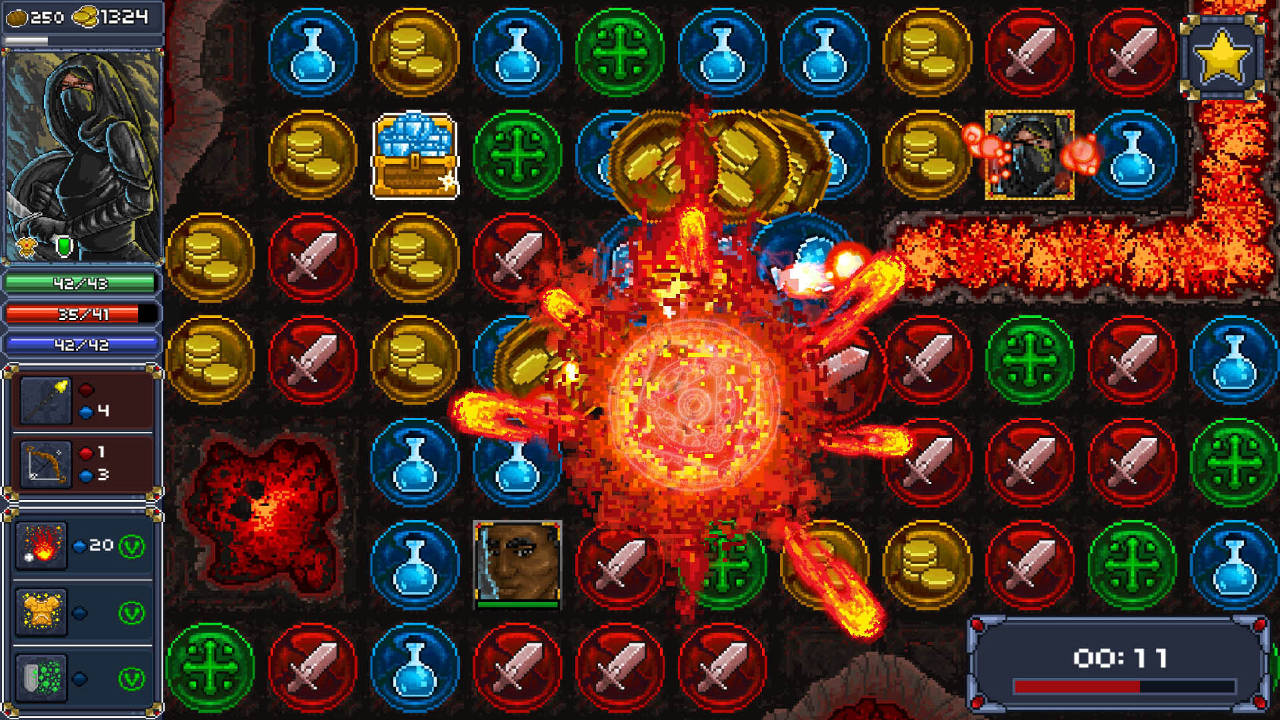 Some levels also contain boss-fights that requires more tactical thinking than the standard dungeons; requiring more damage to be inflicted and more tokens to be collected. However, to help turn the tide, you can create special tokens that deal damage, as well as create a modifier to the amount of energy you can gain. These can be achieved by stringing together large paths of a specific token or colour; the larger the path the more powerful style of token is created. Once activated, these can clear entire rows or columns of tokens, thus gaining you a wider variety of resources, but can also be used to damage enemy types or clear specific paths that may be blocked by cobwebs. If you manage to achieve the maximum chain, the special token can clear everything in a quadrilateral patch; decimating everything along the row and column upon where it sits.

When you add all of its elements together, there’s a lot of depth within the gameplay of this title. However, it also brings with it a lot of repetition and a grinding nature with a constant need to revisit levels in order to clear everything it has to offer. This isn’t necessarily a bad thing as the game as a whole does provide a good form of entertainment and is genuinely fun to play. However, despite that, this isn’t necessarily a game that brings anything new and all of its components have been done before in a variety of other games. Saying that though, the game as a whole does bring something different and with its pocket-money pricing, offers superb value for money.

Overall, Darkest Hunters is a worthy addition to anyone’s Switch library, but only as long as you don’t expect too much from it. There’s nothing here that will amaze you or even excite you. In fact, in terms of its gameplay components, it’s largely generic in its execution. That’s not to say though that it isn’t fun, as it will genuinely provide you with an entertaining time in a casual capacity. This isn’t necessarily a bad thing though, as this is a game that can only be played in the Switch’s portable mode and does not allow for docked play. It’s graphical presentation is charming with its pixel-artstyle and the tactical element of its gameplay and dungeon-crawling do provide a good form of entertainment. However, you can’t escape the grind or repetition that comes with it. As far as game goes, this is nothing more that your average affair, but with plenty of depth and content, it does offer good value for money and is definitely worthy of a purchase if you’re a fan of puzzlers and dungeon-style role-players.

Darkest Hunters is best played in a casual capacity, but does offer good value for money with its depth and playabliity.