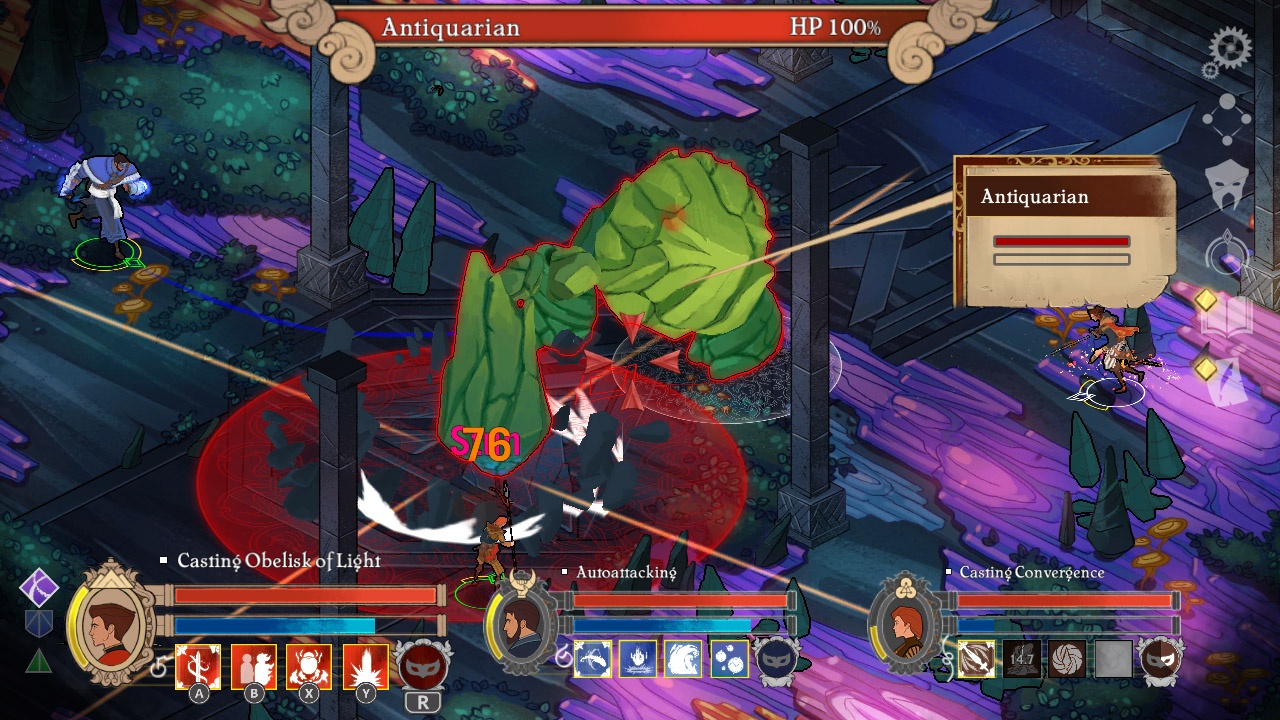 We, as human beings alive during a fantastic era of content creation and curation, are always looking for a new tale to hear and a new saga to enthrall and entertain. For some of us, that comes in microdoses of five minute gameplay, ten minute streaming videos, a quick story that crops up in a particular thread. For others, we want to create a sprawling story that folds in massive amounts of detail, from new languages and species to a complex history that exists entirely off screen in order to justify what you’re reading/seeing now. There’s something to be said for trying to deliver such a massive idea through a new medium, but there’s got to be a clear understanding: if you’re building a better mousetrap, make sure the mouse is attracted to it.

Masquerada: Songs and Shadows is a crowdfunded game that is, to say the very least, ambitious. Set in a fantasy world that’s wrought with magic and a ton of Renaissance-era design, the tale begins in Citte Della Ombre, a beautiful capital city in the middle of a long, bloody civil war. The battle belongs to two factions: The Masquerada and the Contadani. The Masquerada are upper class members who wear Masquerines, Venetian masks that grant the user elemental magics and increased strength and dexterity. The Contadani have no masks, and, as such, are viewed as lesser than, despite being the lifeblood of the city and the people outside the walls. These two groups are conflicting more and more, especially with the appearance of Maskrunners, who are, essentially renegade Masquerada. This is all stuff that is known in the books of history for the NPCs, and it sets the stage for the main game, wherein Cicero, formerly exiled member of Ombre, is now invited back to investigate a kidnapping. This, naturally, is a “more-than-meets-the-eye” situation, and this singular crime has a lot to do with the mess that was mentioned beforehand, especially the Maskrunners. Honestly, I don’t want to spoil a lot of what happens in-game plot-wise, because that aspect of Masquerada: Songs and Shadows is very well written, and the most interesting part of the whole game.

Witching Hour Studios, who brought Masquerada to life, had a lot of keen ideals that they were mostly able to execute within the game. As mentioned above, the story of Masquerada is a gripping and exciting tale, one that has a lot of great setup both in environment and in characters. As Cicero finds out more to the secret of the Masquerines and their creation, there unfolds deeper and deeper layers of connection, relationships and betrayals. The details of the different portraits of the NPCs and heroes alike move and talk beautifully along colorful banners, adding this narrative sense that you wouldn’t normally expect in such a game. The voicework allows the conversations and sudden exposition to really come to life, and I was very satisfied to sit and listen to everyone share their own stories and revelations, even when they were very obvious (seriously, Tristan? You thought that was a secret?). 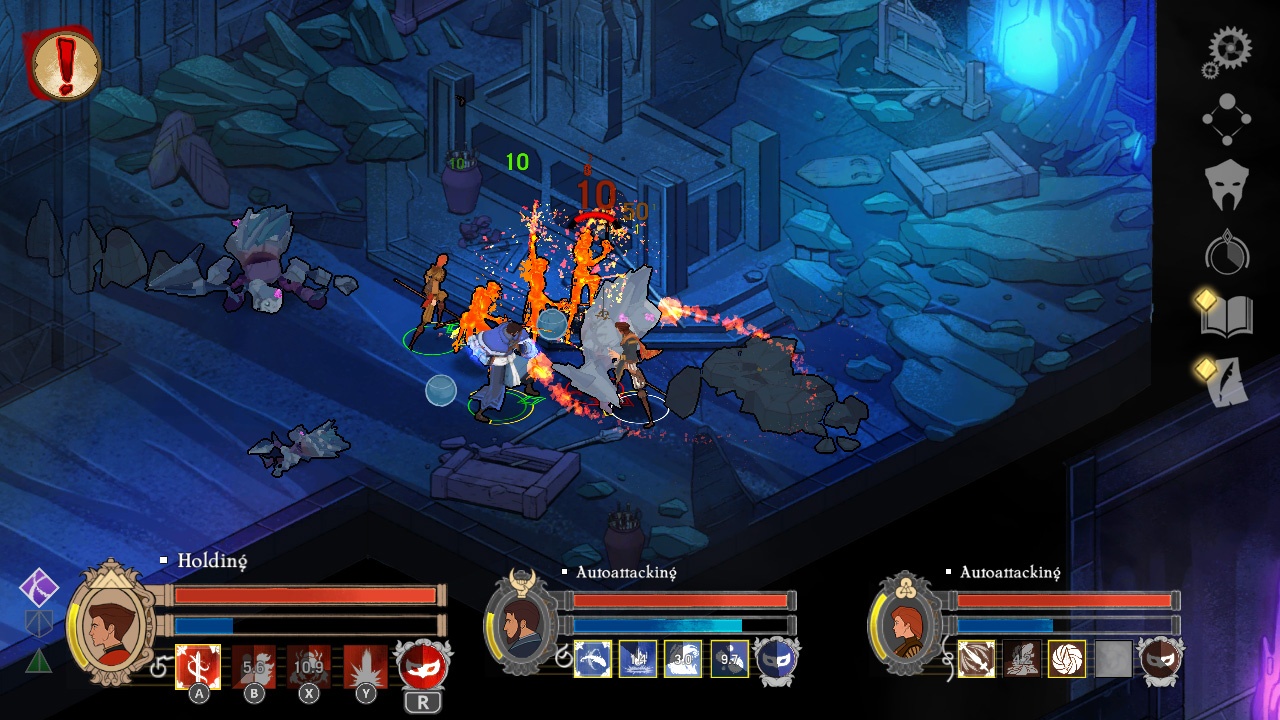 Once you understand what Witching Hour Studios is trying to do with Masquerada, you can sort of fall in line a bit easier with the overall tone and execution. You see, initially, I got very frustrated by the false sense of open control the game suggests. You do not have a lot of choice as to the where and when of what you’re doing. For the most part, though you might be able to cross multiple screens in pursuit of your next target or goal, the game is somewhat linear, and the variances offered are few and far between. You have party customization, sure, but even that gets set aside in the face of certain plot driven moments. The overhead view that suggests a traditional RPG goes out the window, and you understand that it’s the best way to present the story as it happens. This gives players a better sense of the scope of the world and allowing for brief exploration and expansion, which does aid in telling the story more. If Masquerada dropped everything on you in a visual novel sense, the evidence would be overwhelming. If you had this game in a JRPG methodology where you can just roam about, the likelihood of missing something important or getting lost while trying to get your bearings is exceptionally high. For the game to work and tell the story it wants you to hear, you have to believe you’re in control even if you’re not. It lets you discover all the various chapters and addendums to the Codex to fully flush out the world of Masquerada without asking you to search high and low for days. It’s a tough pill to swallow, but it makes a lot of other things make sense, including the combat.

Right, as for the combat of Masquerada…this is where things take a bit of a turn. The combat is unique in that it’s a very odd balance of choices and automation. You take helm of a single character at a time, and basically hold down a single button to start whacking away with whatever weapon you’re holding. You have to be careful, though: since the battlefield is slightly isometric, there were a couple of times when I was swinging a sword at someone who was a bit to my right and hitting me while I wasted time stabbing the air. Additionally, you only control one character at a time, even when you have a party of four, so you’re left in a very interesting touch-and-go rhythm in order to get things done. You swap to a character, “pause” the game using a time freeze mechanic, and then order out a technique for them to do (usually some kind of elemental attack based on the Masquerine they’re wearing). You can take as long as you want to figure out proper trajectories and such, or see which spells will combo best with larger groups, then unpause and let the fur fly. And, for the most part, it works. You stop, assign, start, swap to the next character, and repeat. The results vary from very satisfying when you see techniques combo and massive damage get dealt to feeling very angry when someone throws a spell towards one NPC and then turns and autotargets another, wasting combo potential and delaying the fight. This also is kind of a weird situation, because regular combat on a normal difficulty level can take a shockingly long amount of time (think Final Fantasy Tactics long), but putting the difficulty to “Story Mode” removes almost all incentive to strategize or plan whatsoever. I did the same battle on normal difficulty and on story, and the difference was night and day. So, if you’re stuck by the combat, just swap to Story Mode and forget everything. 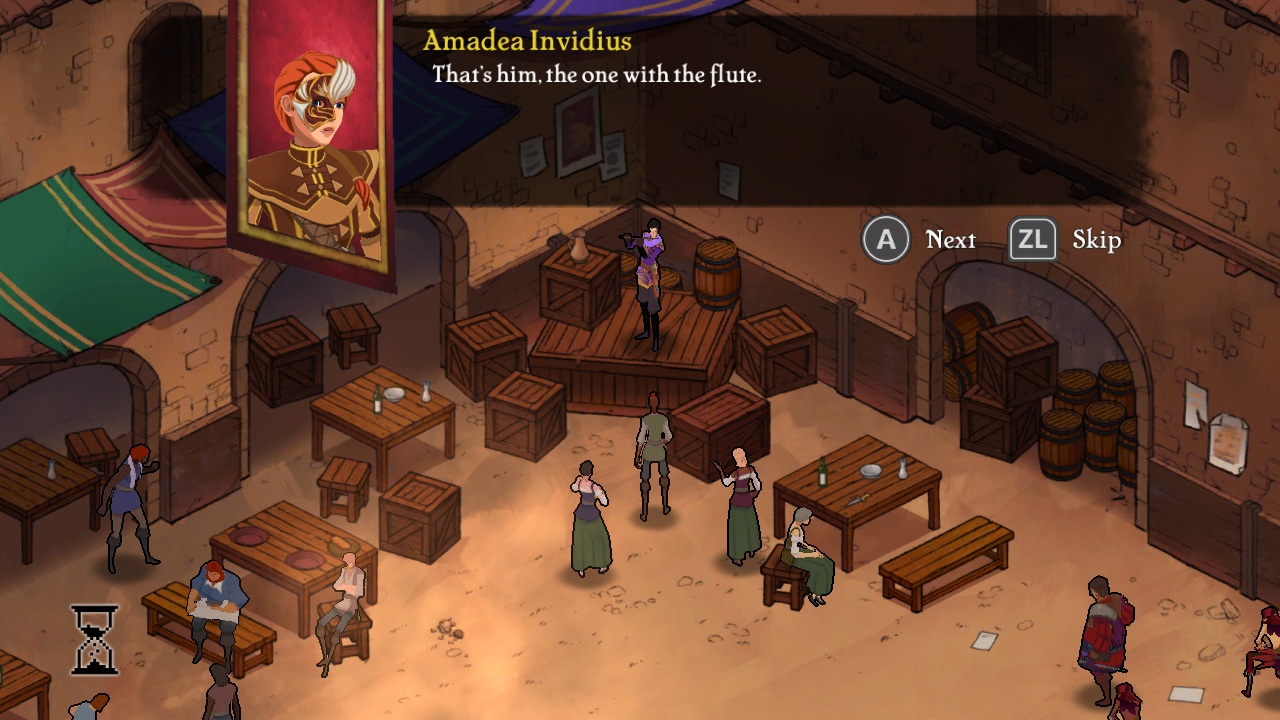 As an added customization, you can assign different elements to your party members and essentially change their classes, but it should be done very early on or not at all. The skill distribution system is a bit unforgiving in terms of class change, so, once you start along a path, you basically want to keep to it or risk wasting a lot of time and making your character permanently unbalanced and wonky. This is probably set up so that players don’t just go hopping along like mad, swapping every battle and making some kind of elemental God as a main character, but that wouldn’t be so bad: after all, the combat itself is kind of a strange duck.

The final note for Masquerada is the performance on the Switch, and this might be a tipping point for some. Once you’re in the game or into a conversation/event, everything runs mostly smoothly. The combat can stutter when there’s a lot of spells being activated at once or when there are extra NPCs that rush in to save their cohorts, but even that’s negligible in comparison to the load times. You feel like it takes an ungodly amount of time just to load the game up cold, and then it gets worse when you’re attempting to load up a new chapter or new scenario. You watch the progress bar load up, percent by percent, and then stop and just sit there. There was never a point where the game crashed and DIDN’T load, but, in a day and age where there’s no moving parts and the whole game can fit on the internal memory of the Switch handily (under 5GB), it feels like a lifetime of sitting and waiting for the next page to turn so you can get on with it. I’m hoping that Ysbyrd, who’s done the publishing, can help streamline the Unity build for the Switch and patch up some performance in the not-too-distant future.

Masquerada: Songs and Shadows feels like the first step towards something much bigger and bolder for the world of the Masquerines and their ancient history of Gods and magic. I could see prequel games and sequel events, and the lore, overall, is fascinating to read and experience. The characters are well designed and in-depth, and nothing has been overlooked in terms of history, yet nothing is overly explained to the point of boredom. The combat is wonky as hell, but it could get better OR you could simply not care about it and have it be a minor obstacle in terms of the storyline. God willing, we’ll see the game get a little cleaner with a fast patch, and we can all appreciate that it’s on the Switch for the same price as the PC. The New Game + mode offers both challenge and incentive to revisit this modestly sized title (about 14 hours, give or take), and it does feel like something I’ll come back to see again. In the meantime, if you are ready to don a mask and find out what secrets lie in Citte Della Ombre, now is your chance to take the show on the road.

The beautiful, engaging world of Masquerada has lots to tell and some good ways to tell it, but trips over performance porting issues and wonky combat.