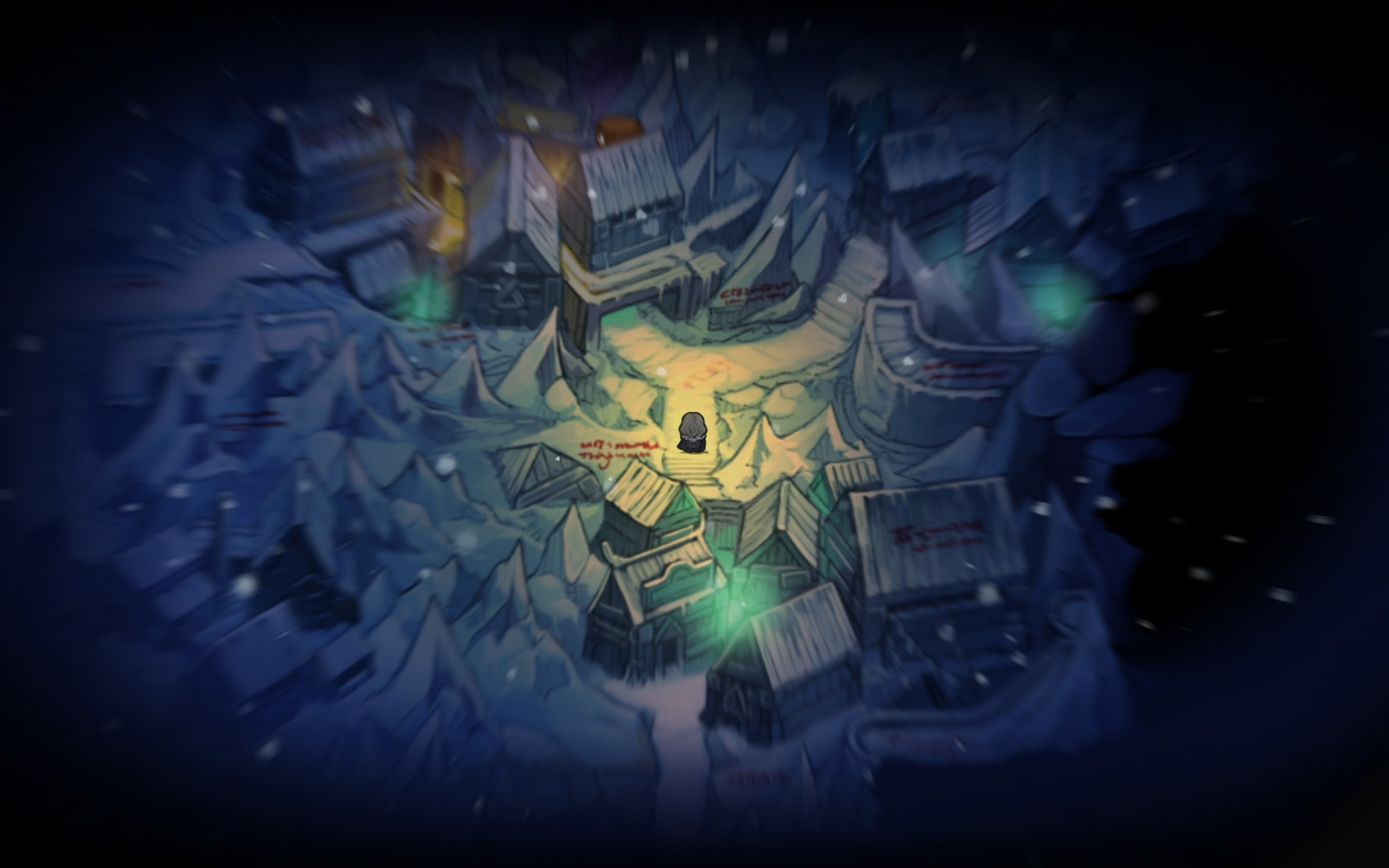 Vambrace: Cold Soul is the newest title from Devespresso Games, whom you might have heard about thanks to their horror game series The Coma. For starters, while in Vambrace the studio’s visual charm and narrative experience can feel very similar to the one found in The Coma, the gameplay itself is nothing alike.

With that said, you don’t even need to play the game to get a sense of how it plays, or from where it draws inspiration from. The developers mention that they’ve been inspired by The Elder Scrolls and Castlevania series, as well as FTL and Darkest Dungeon, but it’s this last one in particular which seems to have left a note noticeable mark in Vambrace’s design.

Vambrace: Cold Soul is a fantasy adventure game set in the city of Icenaire, a place isolated from the rest of the world thanks to the King of Shades, who unleashed a curse upon the city. Frostfell, a frozen barrier that instantly kills anyone who touches it, everyone except you apparently, surrounds the city and divides the city into several different zones. Now the city surface is brimming with Green Flame cultists who worship the King of Shades, wraiths, humans who have gone mad, golems, spooks, and all sorts of traps, thus forcing the remaining survivors to take shelter underground, in the town of Dalearch.

The story is told through dialogue sequences, which are illustrated by the gorgeous 2D art that you can see in the screenshots, very much like the studio’s previous games. There are a few characters that you’ll get to meet throughout your journey, while simultaneously exploring the city. Likewise, you might also run into pages of this Codex that you inherited from your late father, which will reveal details about the game’s world and add quite a bit in terms of background and worldbuilding.

However, In contrast to the game’s narrative element, the actual core of the game revolves around combat and managing your party, which is pretty similar to Darkest Dungeon, so if you’ve played that, you will feel right at home in Vambrace. Dalearch acts as a hub for your adventure, where you’ll be able to hire companions (for free), craft consumables and equipment, as well as travel to various locations on the surface as you gain access to them. 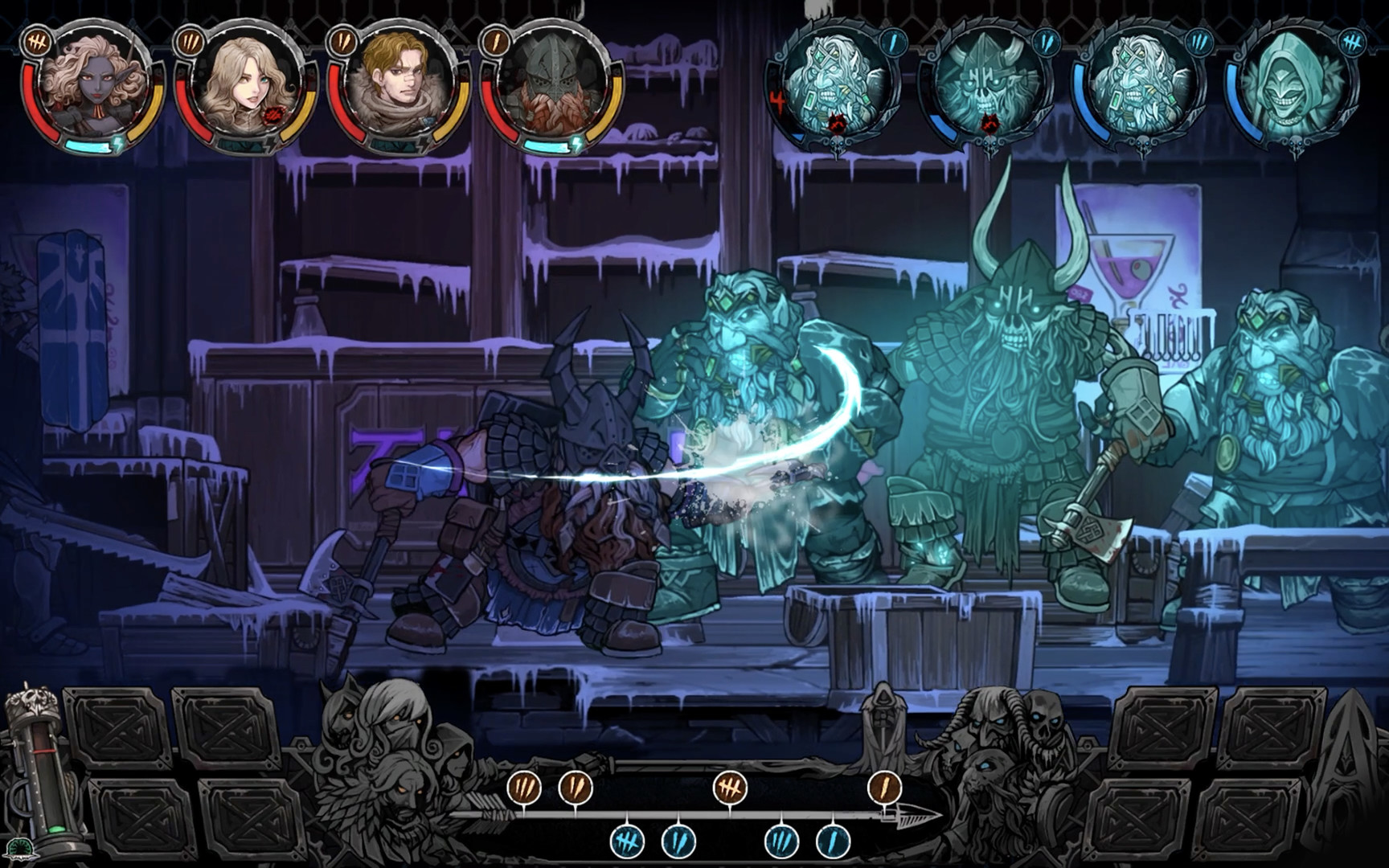 Exploring Icenaire is done in a traditional FTL fashion, like dungeon crawling, where each location consists of five different zones, and each of these zones has a series of rooms where you can take multiple different paths in order to reach the exit. After you complete all the zones in an area, you get to face a boss and, if successful, you will progress in the story and unlock a new zone to travel to. However, you might find yourself failing quite a lot and having to repeat the same level over and over, as you farm resources to craft better consumables and relics that will eventually allow you to endure the entire journey up until the boss. This ain’t no walk in the park, and a lot of times it seems that the game does everything in its power to make things even more difficult for you.

The game has ten different character classes (ranging from healers, tanks, berserkers, and so on), and the recruitment wall does not always offer you a single unit of each class, so you’re not entirely in control of your party composition. With that said, the only way to save party members for future runs is if you sacrifice yourself in order to keep the rest of your party alive. If the main character dies, and she does take one place on the total party number of four elements, you are immediately brought back to Dalearch to recover. The penalty to dying, besides having to start the dungeon from the beginning, is that you lose any equipment that your characters might have equipped.

Combat is turn-based and is extremely reminiscent of Darkest Dungeon (I apologize for making this reference yet again, but I just can’t help it). Depending on the class of each character, they’re either placed at the front or the rear of your party, because the two front spots are usually reserved for units with melee attacks (or at least just one), with the other two in the back being left for ranged units. In any case, each character only has two different attacks, one physical attack which has no cost associated with it, and a special ability that requires your Flourish bar to be full, which is done by using your basic attack. This essentially makes the combat feel very basic, as there’s little to no room for tactical planning in terms of attacks and synergies. In fact, since the classes that are offered in the recruitment board are random, you can’t even properly plan a battle strategy with a specific set of classes that complement each other since you’re at the mercy of what the game offers you each time. You just have to make do with what you have.

With that said, there are different stats that affect your character’s performance, things like Combat and Awareness, which influence how much damage you deal or how effective you are in spotting traps respectively. Still, there is no experience or leveling system, so you pretty much have to rely on the base stats of each class. Nonetheless, you can use relics to improve stats, and these can either be found while exploring, crafted, or bought from traders, but if the character that holds it during an expedition dies, you lose that item forever. This can be a particularly devastating blow since the amount of crafting parts that you can bring with you back to town depends on how many people are alive when the main protagonist dies or when you complete an area. The game really limits you in terms of customization and of how much you can carry at all times. 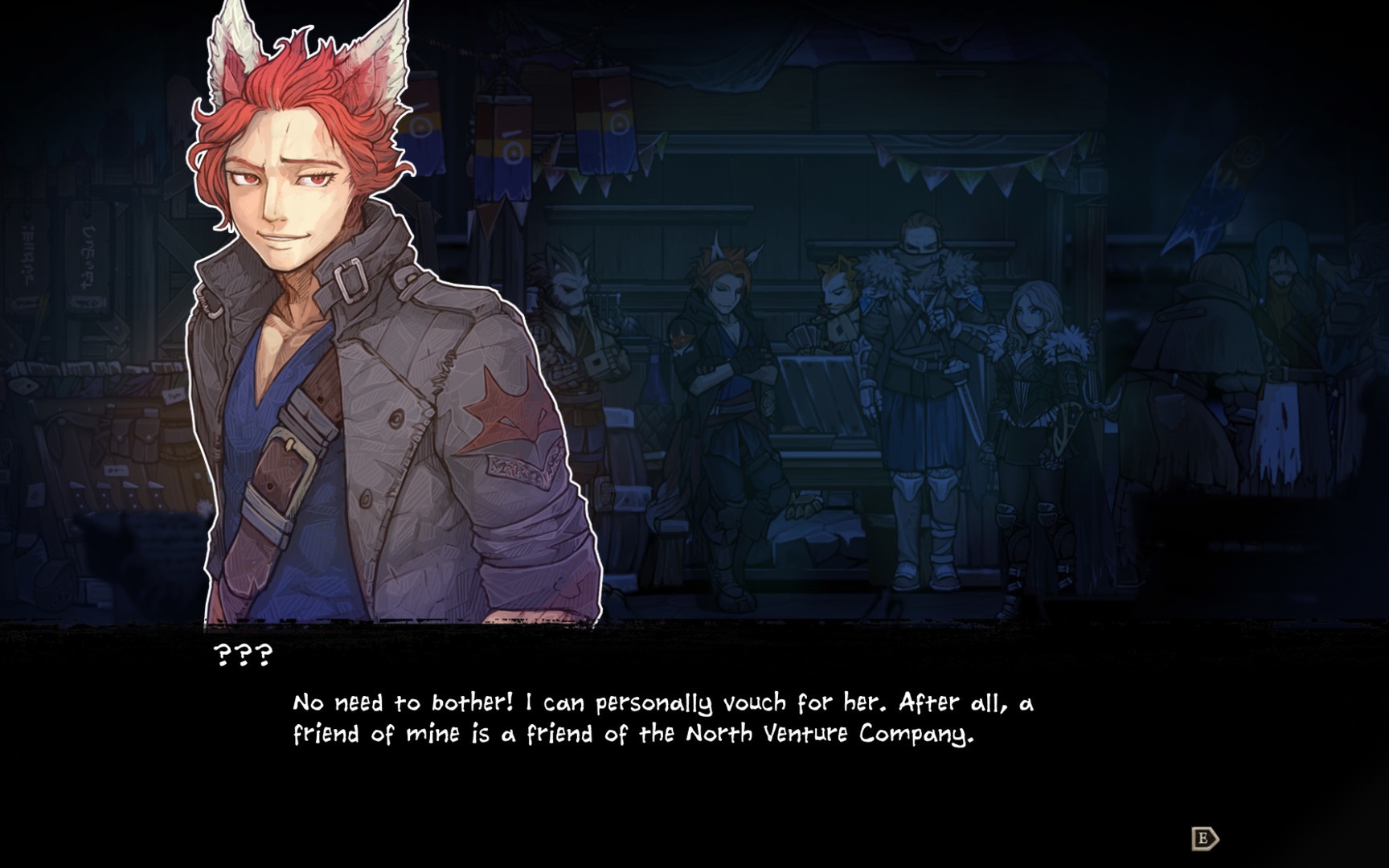 The struggle for having a strong party doesn’t end there though, as consumables and relics can only be equipped/used when you’re in town or when you camp while you’re on the surface. This brings up another issue that I have with the game, and that is that camping feels extremely unbalanced as it is, and this is solely due to the fact that camping spots are not fixed, they may or may not spawn in each zone, so you can’t plan your runs around this, but at least the developers have made it so that you always have a camping spot right before a boss fight. This means that if you get into a tough fight and your characters are low on health, all you can do is hope that the game puts down a camping room right in your path so that you can heal (assuming you have brought any healing items with you), otherwise you’ve pretty much lost already. I also can’t fathom why crafting is strictly done in town, or why you can’t consume potions during combat at the cost of a turn. These just seem like really odd design decisions to me, that do nothing but hamper the gameplay and the enjoyment that the game, in general, could otherwise bring.

Then there’s another thing that really intrigues me as well, and that’s Vigor, which acts as a sanity meter in theory, but it ultimately is just another separate health bar. If a character’s Vigor is depleted that character dies, just like if it ran out of health points. In practice, this only really translates to how you’re able to recover each of these two different values. Personally, I think that it doesn’t make sense to have two different character stats whose sole purpose, if it reaches 0, is to kill your character. A system where low/depleted Vigor would instead trigger certain debuffs would be much more interesting and dynamic.

Then there’s also the enemy AI, which seems to need a bit of work. A lot of times I’d have a character low on health, and the enemy would completely ignore it, instead focusing their attacks on other party members who had a lot more health points. Funnily enough, I’ve ran into some problems with a specific enemy unit which would just keep healing itself and not attack me, but this has apparently been fixed. Hopefully, as time goes on and developers receive more feedback from players, further tweaks to the AI will be implemented.

At the end of the day, while the story did manage to grab me, and while the characters are interesting and unique in their own ways, the combat just makes the whole game dull and tiresome to play. It’s crystal clear where the developers got their inspiration from in regards to the combat, but, unfortunately, it just falls flat and ends up being too simple to be engaging, and sometimes the whole gameplay loop can even become quite frustrating. While not a bad game, Vambrace: Cold Soul, to me, ended up being rather disappointing, because no matter how invested I was in its world and characters, the game always seemed to turn its gameplay into an obstacle that would just stop me from enjoying it.

Vambrace: Cold Soul is a fantasy adventure game featuring turn-based combat and dungeon crawling from the makers of The Coma series.