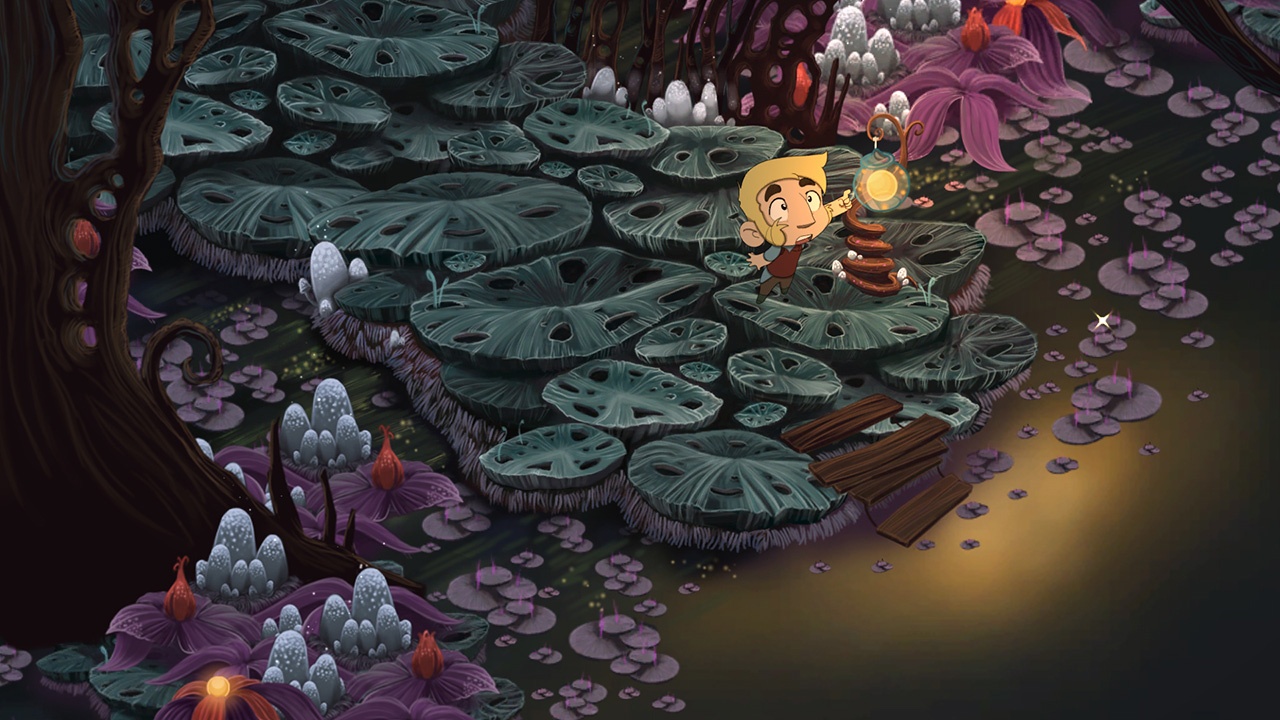 When it comes to video games, we have to judge a title and a concept on a multitude of variables. Gone are the days of “will this attract kids with quarters” and “can I convince someone this green dot is a frog.” Instead, we look to games to be escapisms, true, but also to tell a story, to inspire ideas, to create discussion and to provide vessels for music, discoveries and more. Pewter Games Studio has an idea they want to share with the world, and they understand it’s not a very long story to indulge in. Still, it’s not how long a game drags on for (though any game that gets more than 40 hours out of a player is impressive), but what the game does in that time. And that approach, along with a healthy heaping of charm and design, help propel The Little Acre into the hearts of gamers everywhere.

Set in 1950’s Ireland, The Little Acre is the story of Aidan and his daughter, Lily. Aidan’s father has gone missing, and no one is really sure what’s become of the wacky old inventor. Aidan doesn’t have to go searching far before discovering his father’s created something truly remarkable: a portal to another, mystical world called Clonfira, one full of strange creatures and lost civilizations. Unfortunately, Aidan finds this out by getting pulled through the portal, and now Lily has to figure out where HER father has gone, just as Aidan is searching for his. Together, Lily and Aidan create an odd game of tag in the process, as the story unfolds further and we discover that saving the farm might not be the most important thing, but saving the world itself. The whole story is very charming in terms of delivery and concept, and is better accented by delivering it as a game: you’re able to ingest different chapters of the tale through first Aidan’s eyes, and then through Lily’s, taking them in turn. The whole thing is also a very short romp, in the grand scheme of it all, so having it play out as a game instead of an animation makes total sense. 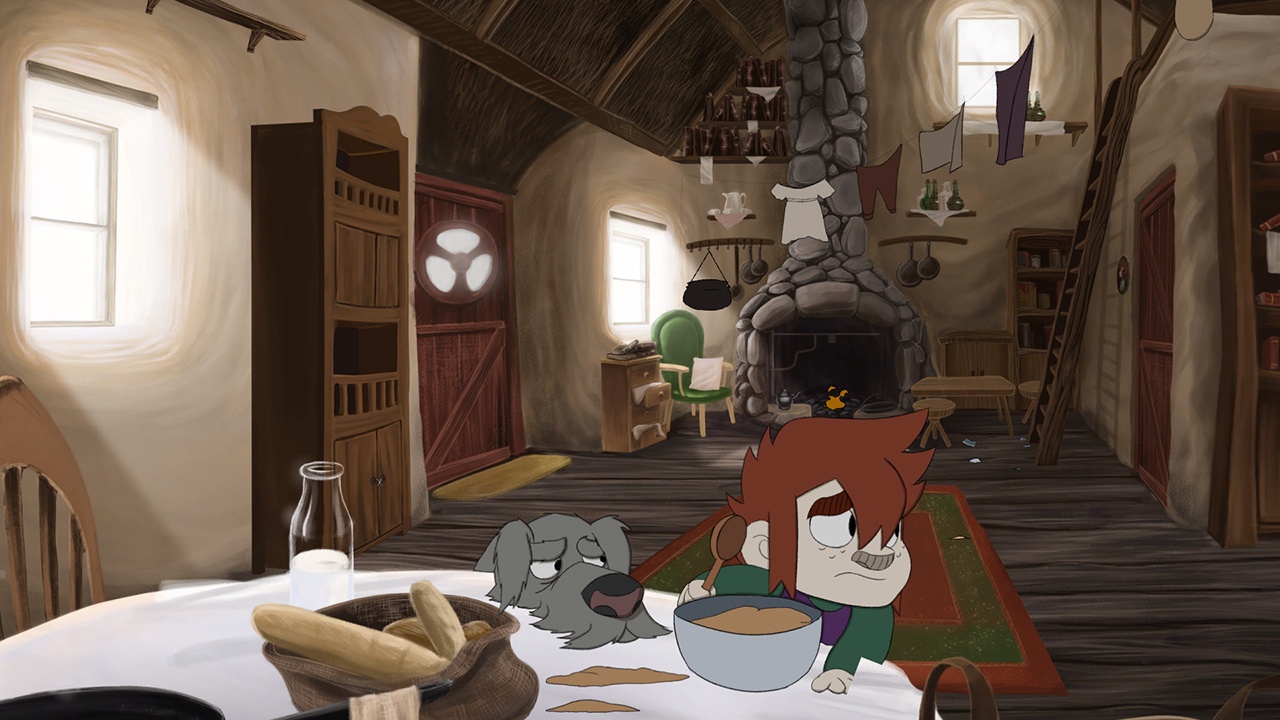 In terms of gameplay, Little Acre is an adventure game, very linear, and fluctuates between a bit of a puzzle adventure, a point-and-click adventure and a general “walk and explore” adventure. There are times where you’ll need to find certain items and discover how they interact with other things to progress the story, and, at others, everything you need will be on the screen you’re locked into, and you can’t progress until the pieces fit together. Eventually, you’ll get to puzzling screens as well, but this isn’t going to be a game of “scratch your head, tear out your hair and scream” to find solutions. Very often, the answers are as plain as the nose on Lily’s face, and you simply just need to move your character to where they need to go in order to progress. The easiness of the puzzles feels very intentional: they’re meant to add to the atmosphere of the story at hand, not to slow down the player by forcing them to work out illogical jumps.

The format of the different segments of the game are both a blessing and a curse for Little Acre. On the one hand, it does make for very relaxing, directional gameplay, allowing the player to focus on the tale being told instead of hesitating very long with certain ideas. One of the earliest puzzles, in which you need to get grandpa’s generator up and running, is a perfect example of simply following what’s on the screen and using a modicum of sense to fit everything together and making the generator work. This is a boon, and it also plays in well to what we understand about Aidan’s father and his general designs. On the other hand, when things don’t quite make sense, they become incredibly frustrating. You have to leave a note for your father before Lily can set off into the machine, and Lily wants to find a place to leave it. I trudged back to the home in order to put the note on either the table, the door, the generator or any number of other places where you’d expect a note to be, and Lily rebuffed me every time. It was only when I decided to leave the note on the dog’s face that things moved on, and I was left scratching my head as to why on earth that made sense.

These sort of “wait, what?” moments attempt to elongate the game, which, and I can’t stress this enough, is not very long. Players will feel like Aidan moves far too slowly in the “real” world when they encounter him and might get a bit batty trying to urge him to move faster. Moving through the realm is fast enough, but you spend only about half the game there, so the rest of the time you’re just trudging through the front yard of Little Acre, trying to figure out how to get to your next point faster. If you’re here just for dynamic gameplay, you’re going to be quite out of luck. The game ports to the Switch well enough, though you might get a bit hung up mashing buttons to interact with items, dragging obvious things out of your inventory and matching them up, and then having to wait for certain events to resolve before doing anything else. Additionally, you might also get tripped up when the game glitches. It doesn’t happen often, but, since a lot of actions and choices are in a preset animation routine, the game will sometimes freak out and there’ll be two Aidans on the screen for the briefest moments, which honestly freaked my girls out. 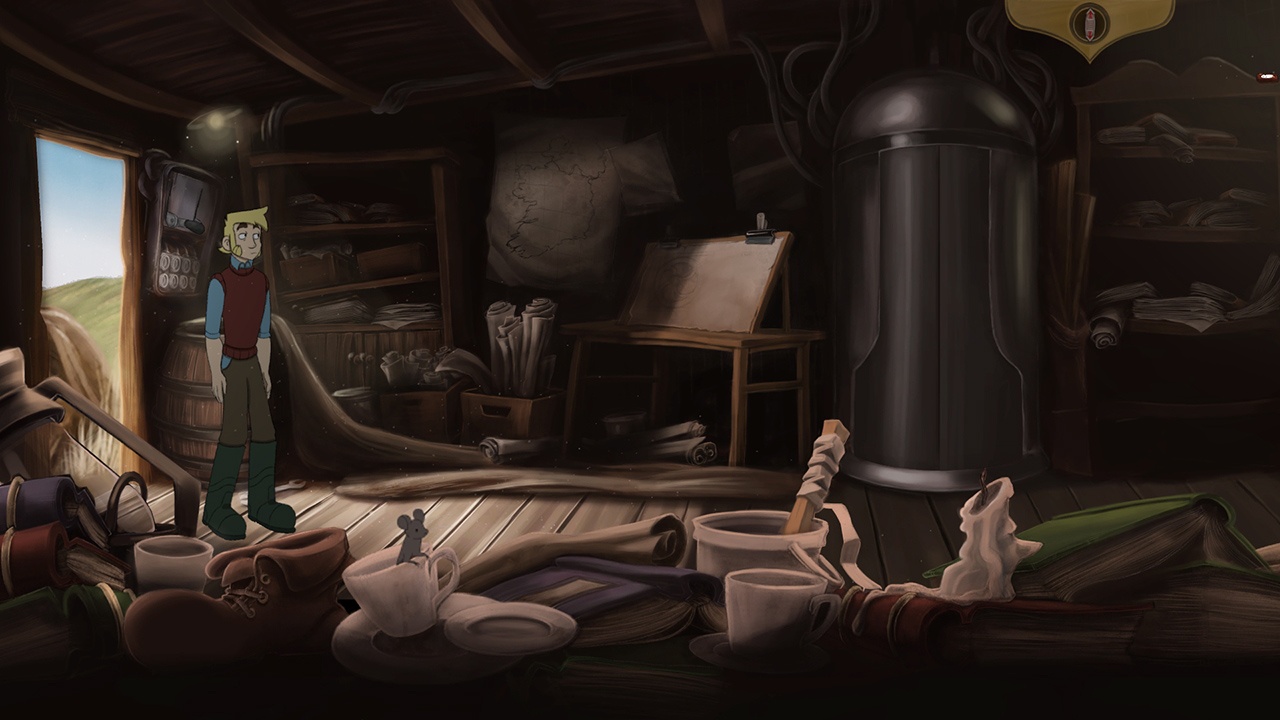 Yet it’s the story of Little Acre and the style in which it’s told that makes for a grand experience. The animation, simply put, is sublime, some honest-to-goodness hand drawing that makes Pewter Games a grand point of attention. Even their logo is more engaging than some game designs that I’ve seen in recent memory. Everything from the merry bobbing of the characters as they move about to the surprisingly detailed and engaging backgrounds deserves your attention. Since the puzzles are both short and easy to solve, the game shifts from a concentrated task to an almost passive enjoyment, like I was watching a movie from my childhood play out on the screen. The voice acting is superb, giving Aidan, Lily, Nina and others a real presence on the screen. The soundtrack is a bit repetitive, but suitable for the atmosphere, with a whimsy to the lighter moments and appropriately “child-level menacing” for when certain bad guys are revealed. The tale isn’t necessarily for children, but anyone who lived through the emotional destruction of Pixar films (or, for the older people, Don Bluth) will be able to enjoy the story and the twists.

Overall, Little Acre is an enjoyable visual and aural game that’s worth the price of admission for presentation and content. If someone is looking for a serious puzzle game or a challenge to their psyche, they’re going to be sorely disappointed in how simplistic the overall “gaming” element is. However, if you’re willing to let your ego relax and understand you’re the passenger, not the driver, you’ll have a wonderful time. Don’t cheap out and watch YouTube plays: travel down to The Little Acre with your own two legs.

Wonderfully animated and voiced, The Little Acre does little to challenge players, but sometimes the joy comes from what’s being shown, and not how you see it.