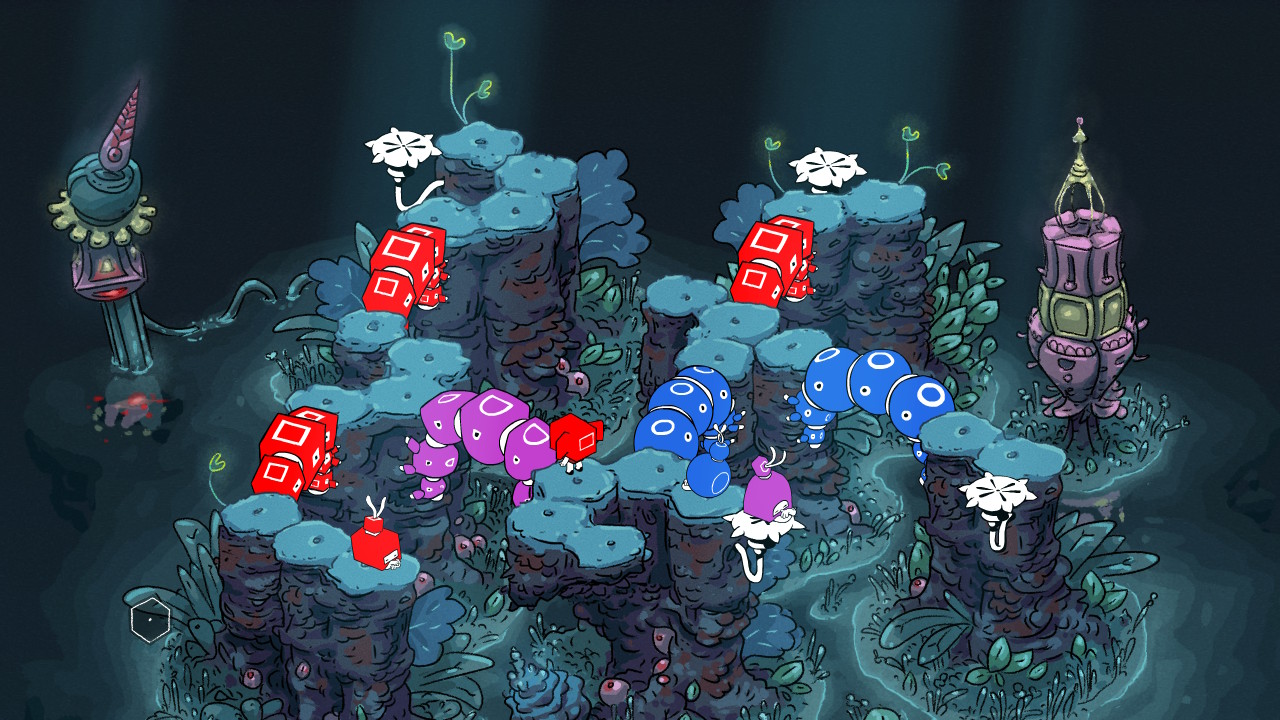 Good puzzle surprises are so hard to come by nowadays. A lot of the time, when it comes to puzzle games, I feel like the genre has been overcome with off branded match 3 titles, time management sims disguised as puzzles or incredibly obtuse concepts that masquerade as “artistic” when they’re really just “annoying.” A great puzzle game takes time and attention, lets the players unfold details and unpackage routes without discouraging them or actively making the game less enjoyable. The end result is, always, something that requires concentration while still being relaxing. Jumpsuit Entertainment has managed to hit this critical nail on the head with their release, She Remembered Caterpillars, and also crafted something that seemed to resonate with an odd part of me that felt…touched.

The objective for each level of She Remembered Caterpillars is simple: you’re in charge of some small, colorful beings (who we learn are called Gammies) to their various bases so that they can helicopter away and declare the stage cleared. When you’re first introduced to the characters, they’re static beings of a single color, and the rules begin to present themselves. A red Gammie can cross a red bridge, but cannot go through a red arc: a blue Gammie can go through that red arc, but not a blue one. The first few stages are really just to help you get your sea legs for the control and movement of the game, which can feel odd at times. The characters seem to move on a fixed grid system between panels, but the panels themselves aren’t really in straight, clean lines, meaning you’re sometimes moving at a slight angle and can lead to initial frustration with directionality. You need to figure out that you swap between the Gammies with the L/R buttons, and I’m surprised the game doesn’t tell you this, but it’s the last of the instructions that come unclear. After you finish the first full act, things get…weird. 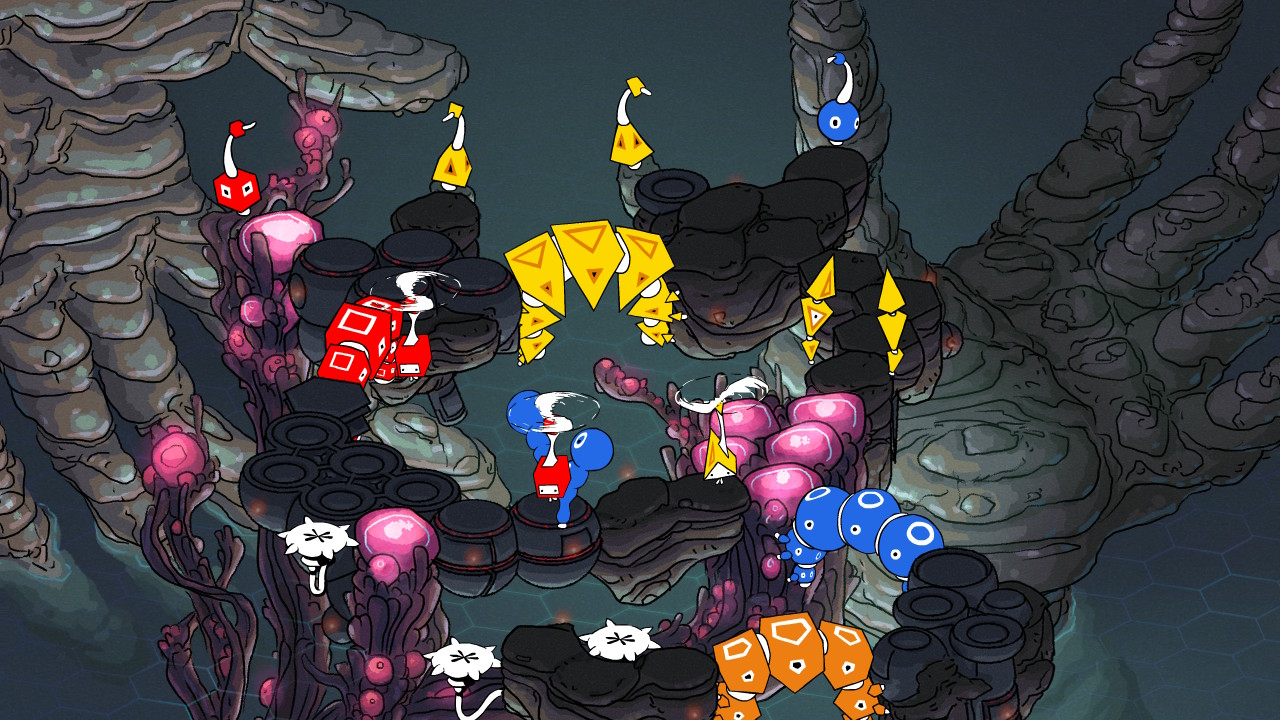 She Remembered Caterpillars starts to compound ideas and rules on you, though at a thankfully reasonable and rationed pace. You gain the insight to combine different Gammies, which creates mixed colors that have both the strengths and weaknesses of the individual colors. You figure out that certain bridges only appear if you have one Gammie stand on a panel to keep it up while another Gammie runs across. You even start to add and remove color from the Gammies, turning them into different beings based off of what will help you solve the puzzle. What’s really grand, again, is that everything feels intuitive and builds off of what you learned previously. By the time you reach act six, you’ve learned everything that you need to get to the end of the game, but that doesn’t mean it’s an easy ride. You’ll never hit a point, for the entire game, where you’ll be stuck to where you have to reset, but She Remembered Caterpillars doesn’t hold your hand at all, which is ironic considering the background story that’s happening.

Right, the background story. If you’re here for confusing, convoluted and potentially emotionally devastating framing devices, then you’re in good company with She Remembered Caterpillars. The game mixes equal parts of a mythical, fictional narrative that feels like a B story to Hollow Knight or Samorost and some real life trauma between a father and child (I got the impression it was a daughter, but what do I know). As things unfold, from act to act, you are drawn into this realm of storytelling that only gives you snippets: excerpts from a tome that you’ll never fully read, one portion of a conversation, the last words shared during a terrifying reveal, and that’s all you’ll get. While I can’t fully piece together the story (and I’m hesitant to do so for fear of spoilers), the overall tone was so sad that it rang a distant bell somewhere inside me. The feelings of love, lost time and attempted forgiveness are real, and heavy, and sit in dynamic contrast to the task at hand as the small Gammies forge ahead, attempting to do whatever it is they hope to do. 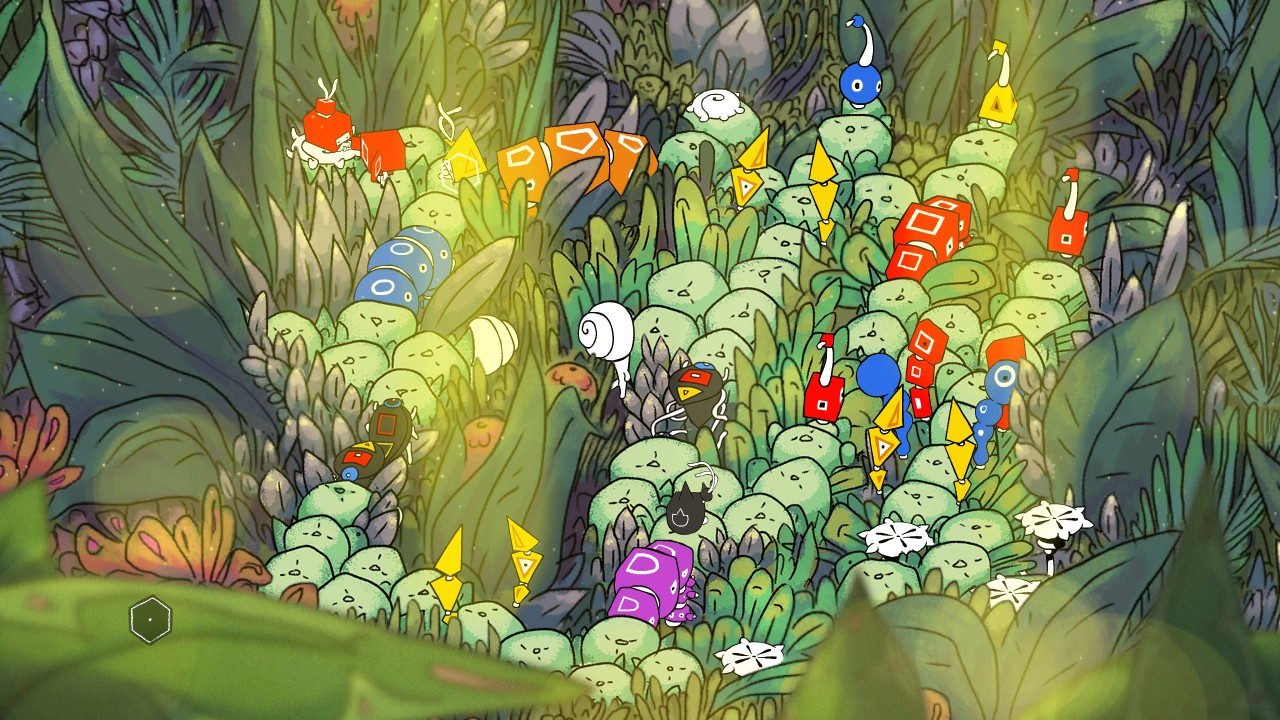 Naturally, the entire package of She Remembered Caterpillars is sold in visual presentation, not only the puzzles or the story. Far from just being a weirder Pikmin with target goals, each stage that you encounter feels lovingly crafted to match the atmosphere and intent of the Acts as the story unfolds. Beginning in simple, almost dark realms, crawling and matching amongst roots, the levels ascend and take on bold new meaning as you move further to the truth and towards the underlying thematic of the entire game. It’s fascinating to watch the same elements of gameplay move from lonely cliffs to the inside of what looks like a cathedral, and then into a poisonous, barren swamp. When you finally reach the final act, which is such a beautiful culmination of gameplay and aesthetic, you’re locked in awe of how everything has come together in a narrative and environmental idea. The subtle music and sound effects of the Gammies only adds to the overall tone, and it becomes a memorable end to the game, complete with a suiting, saddening credit roll.

She Remembered Caterpillars is not an easy task to undergo, no matter how you look at it. You’ll fly through the first couple of Acts, and gradually slow down as the seemingly innocuous levels become harder, more complex, more demanding of careful movement and replacement. You’ll trace and retrace pathways, not because mistakes were made, but because it’s the only way to properly line up everything to signal the grand finale. When you lock in everyone and they take off in a helicopter fashion, you feel yourself fly alongside them, drifting upwards and onwards to what comes next. For the briefest moment, like Lenny the Leaf, you can see the whole picture, the whole image, and it’s beautiful in the ending. She Remembered Caterpillars will stick with you, both in what it had to say and how it said it, and will gladly welcome back repeat players as long as you can handle the process all over again. And, perhaps, it may be worth it to revisit and see just what love can truly mean in a family.

A gorgeous puzzle tale that is rimmed with sadness, She Remembered Caterpillars will certainly leave an impression on your memories.