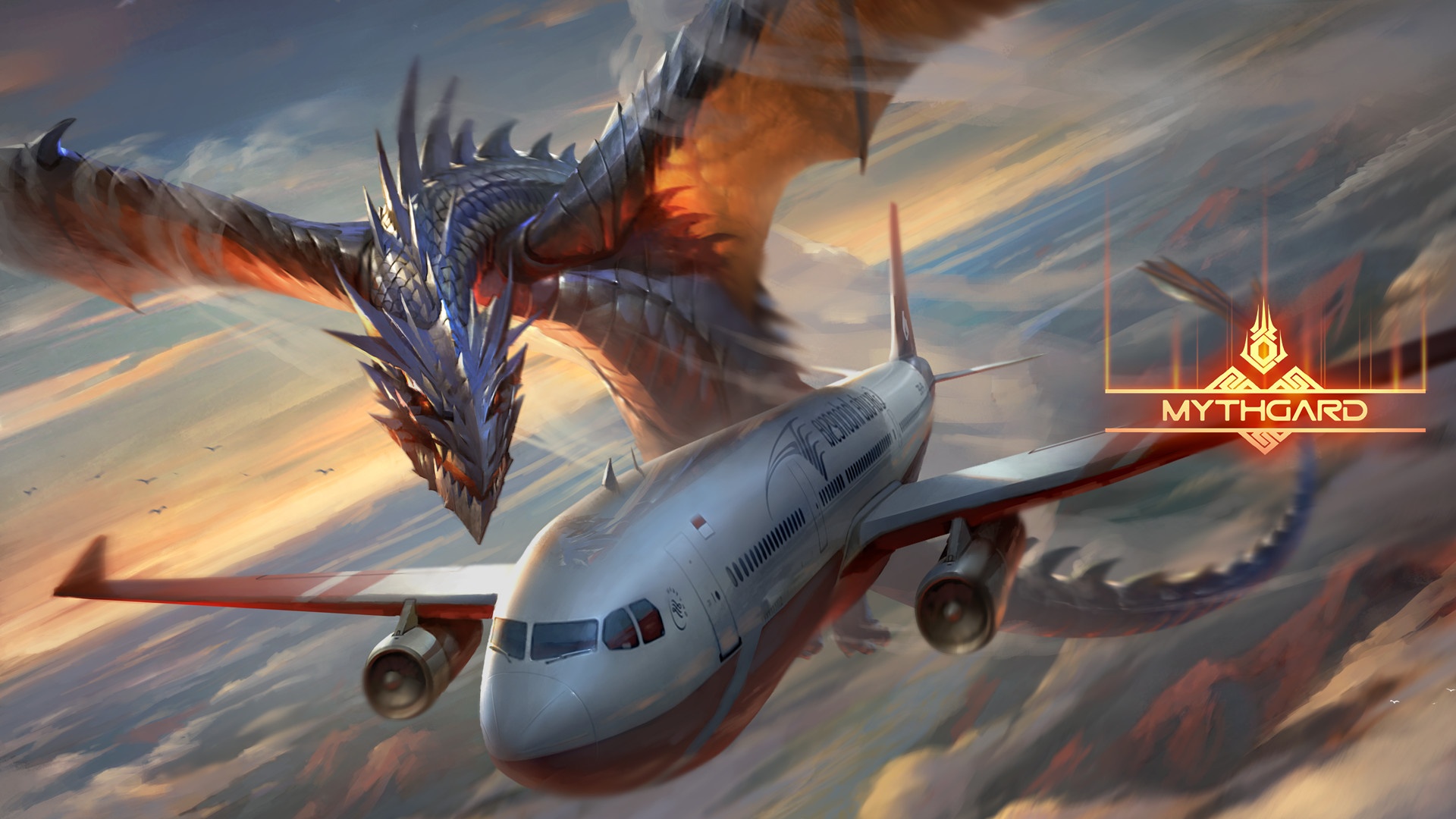 Mythgard is an exciting, action packed Collectible Card Game currently in development by Rhino Games, a San Francisco studio founded in 2016 by Peter Hu (Former Blizzard developer) and Paxton Mason (former Google X Senior Software Engineer). The two came together in 2016 to create a CCG with mechanics akin to Magic: the Gathering, but designing it for exclusive digital play like Hearthstone. If you’re someone who is worried about this being another poorly-developed CCG inspired by Hearthstone, there’s no need for concern. Even though Mythgard is currently in closed Alpha, it sports a great deal of content that would keep any CCG fan entertained for hundreds of hours; Draft and Constructed modes for PvP & PvE, Ranked play, 2v2 games, puzzles and a unique, interesting story mode.

Mythgard is set in a modern-day alternate reality where the gods of myth are real. Over the centuries, most of the most powerful deities have disappeared, leaving the remaining gods and mythical creatures to find their place in a world now overrun by man. Mythgard draws inspiration from American Gods, Fables, Grimm, Harry Potter, and True Blood, amongst others. Its modern-mythology/urban paranormal setting, while extremely popular in most other media, is greatly under-served in the gaming space.

The story mode introduces several protagonists as you play it, each belonging to a different faction that have their own creature archetypes, preferred playstyles and mana type (I’ll cover this shortly). This cyberpunk, creature-infested world allows for some very unique creature archetypes that we’ve mostly not seen from other CCGs, allowing Mythgard to develop it’s own identity as you play it. Blue cards mix Vikings and motorcycling culture, Red cards mix Greek underworld creatures and Vampires, Orange cards have middle eastern and desert themes, Yellow cards mix high technology with Aztec & Mayan themes, Green cards combines witch and nature themes and finally there is one more faction yet to be released or detailed, which will be Purple. These 6 factions will allow players to drive their decks in a direction that they want quite easily, and players can choose to mix said factions however they want when they make a deck, making for some very in-depth and stylised decks, something that should appeal to most Magic: the Gathering fans.

As you play through the story you get hints at the story and world that each protagonist lives in, and learn that each card in their decks means something to either the character or their faction, giving a sense of weight to each creature or spell you play, which is something that most CCGs have been missing in the past. This is further developed through voice acting during cutscenes and summoning sound effects that keep the combat interesting as you play. While there’s some missing or rough audio, however what is there is generally high quality and suits the theme of their cards/characters. The background music is composed by John Robert Matz and gives an epic and gripping tone to all of the cutscenes and combat, which you can preview on his Soundcloud here. 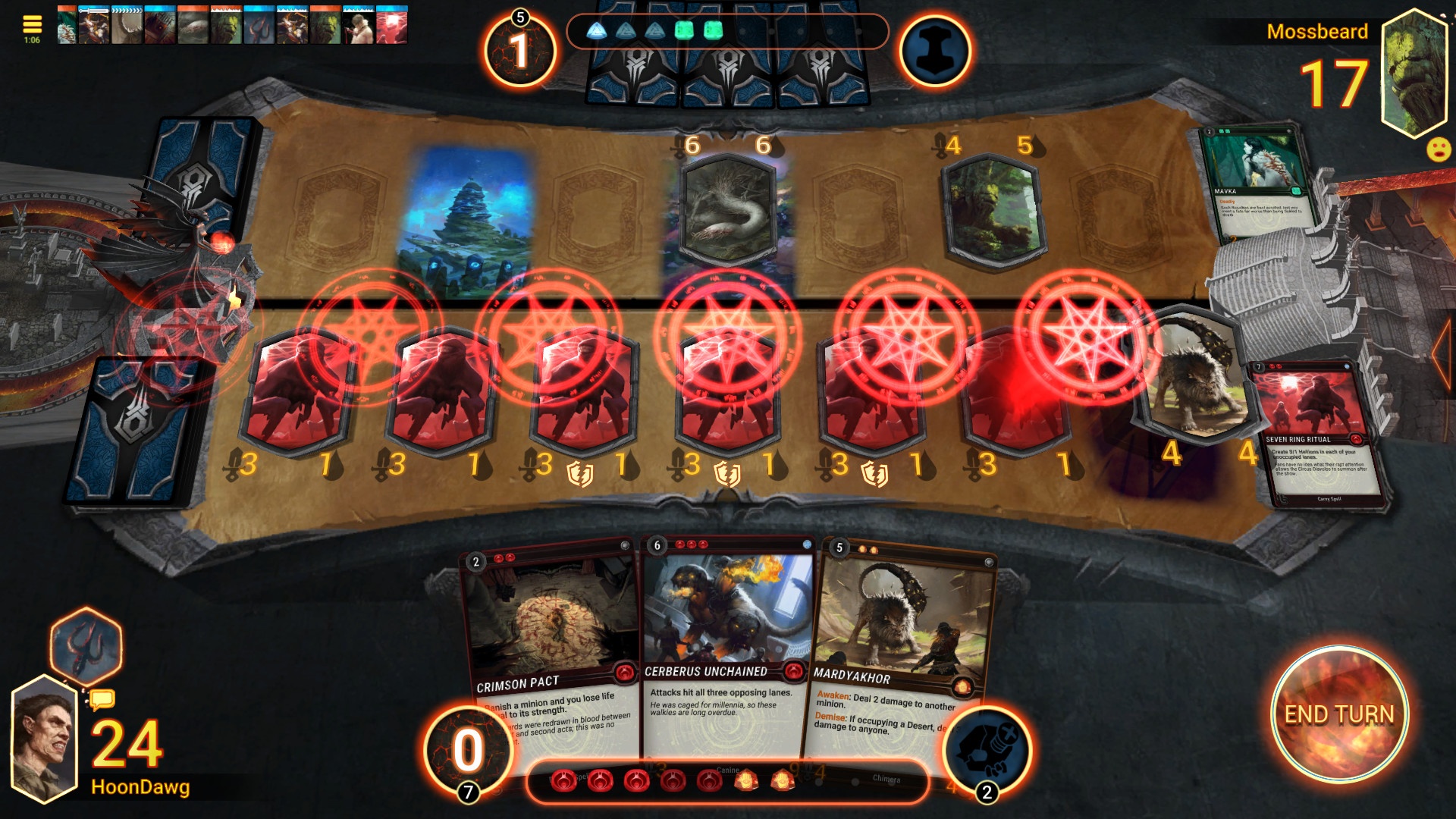 As for the art of the game, every card has a unique piece of art that is beautiful and contains high quality images. All of the card art is detailed and clearly communicates the idea of the card to the player, further making the cards feel part of these alive factions and not just cards in a video game. The art style somewhat resembles Magic: the Gathering‘s style, but with it’s own unmistakable flavour, which is refreshing and relieving.

While there are a lot of similarities and clear inspiration taken from Magic: the Gathering in particular, Rhino Games has developed their own style not only in the art, but also in the gameplay, which has led to some innovations on mechanics from other CCGs that are a warm welcome to what has mostly been a bland genre for the past few years.

The creatures of Mythgard can have multiple different effects that players familiar with most CCGs, but more specifically Hearthstone, should feel comfortable using. There are abilities that allow creatures to deal damage first, have effects trigger when summoned or killed, dealing extra damage after attacks, trigger when dealing damage to the opposing player, instantly kill other creatures, the list goes on and on and can all be found on the Mythgard wiki. Where Mythgard begins to develop its own unique systems is when it comes to how the game is played, rather than the intricacies of creature types.

Each card has not only a mana cost, but a required amount of specific mana types needed to play said cards. To gain mana players must burn their cards, which means returning the card to your deck and marking it as burned (meaning it can’t be burnt again), shuffling the deck, and giving the player 1 mana crystal of the appropriate faction. Every turn a player is given an amount of mana equal to their crystal amount, but a player’s crystal count doesn’t raise unless cards are burnt. This is really interesting as it adds a completely new level of strategy, where control-oriented decks will have to carefully choose what tools they’ll sacrifice for their much-needed ramp, while aggro-oriented decks get to develop a board state quite rapidly. To offset this, control creatures are quite powerful and the spells aren’t very expensive, which means aggro decks can also run them to help push their tempo. While it is possible that this could create a meta that other CCGs have suffered from, like Zoo-focused deck metas from Hearthstone, it looks like it will be similar to Magic: the Gathering, where each style of deck has its own tools and win conditions that allow them to be competitively viable in a ranked ladder or tournament environments, which is really exciting. 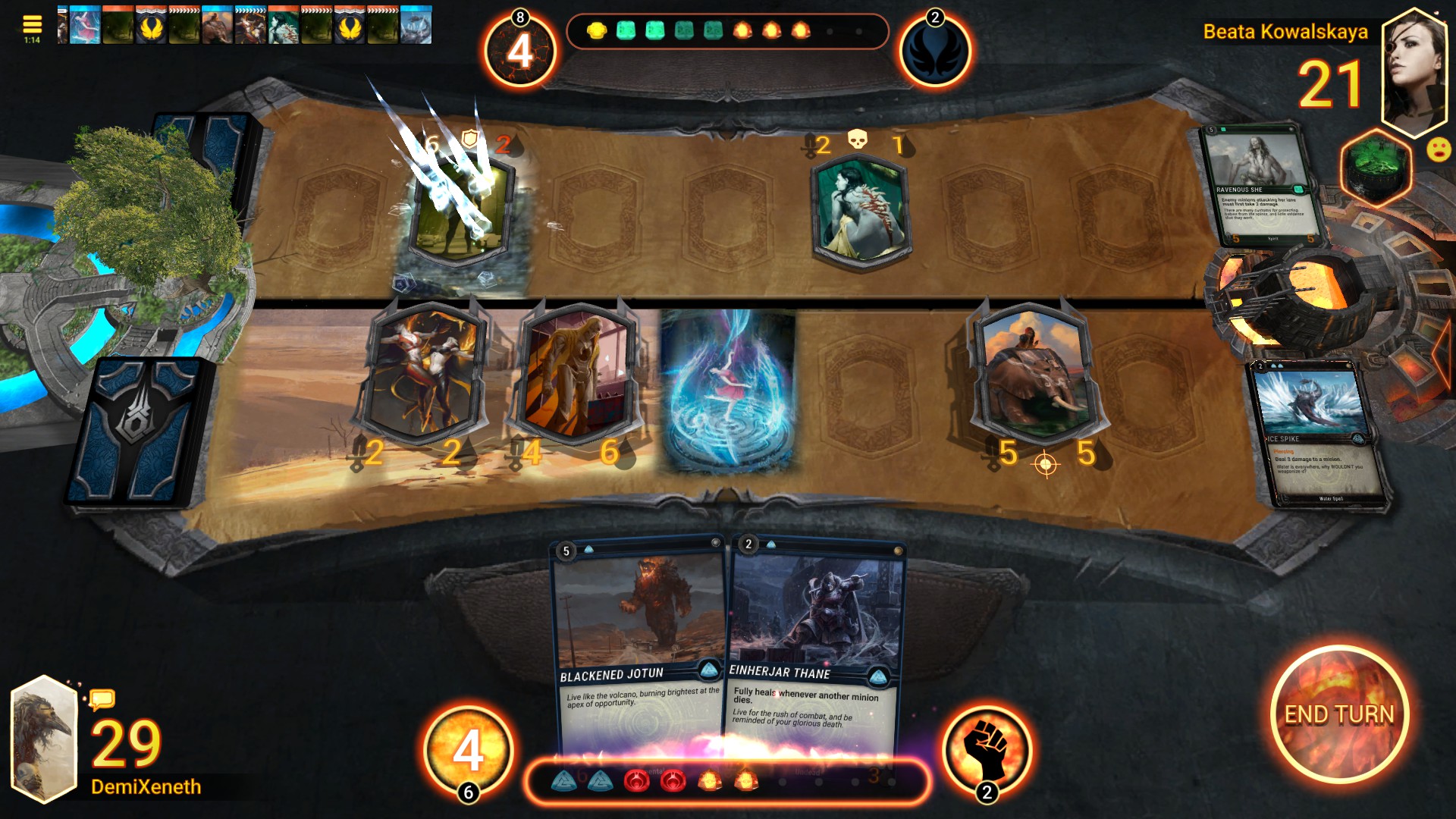 Another innovation that Mythgard has created is their Lane system, which adds yet another level of strategy to the game. The board is made up of 14 tiles, 7 for for each player that sit opposite their opponent’s 7 tiles. When a creature makes an attack it either hits the opponent directly or a creature that’s within the 3 tiles directly opposed can choose to block the attack. To try and avoid this, players can move creatures by sacrificing their attack with said creature to move one tile left or right, unless they are at the edge of the board of the creature has the teleport skill, which allows it to move anywhere. When creatures actually deal damage to each other, it is handled the same way as Hearthstone, where each creature loses health equal to the attack of it’s opponent(s). Furthermore, players can enchant these lanes through spells or monster effects, which are not to be confused with Artifacts, which are instead cards that have wide-scaled effects that have lasting effects the game’s state and pace.

Finally, each deck has two more inclusions, which are their Paths and Powers. Powers are basically the same as Hero Powers in Hearthstone; 2 mana, does a thing and you can do it once every turn. Where it changes from Hearthstone‘s design though is players are able to choose a power regardless of their factions, allowing players to create their own class in a way. Powers are similar in terms of players being able to choose which one they want to use, but rather than being activated they give passive bonuses and extra starting health, helping shape your playstyle rather than your class like powers do.

I’ve played several different CCGs through the years and Mythgard is one of the most promising experiences I’ve ever had. While there is some rough placeholder UI assets and other assets that need to be added, the current experience of the game is refreshing and very entertaining. It’s incorporation and innovation of other CCG elements feels revolutionary for the genre and I have no doubt it will take off. Be sure to keep your eyes open for news surrounding Mythgard and if you’re a fan of the genre I highly recommend you sign up for their closed beta, which is available at the bottom of this page.

A brand new Collectible Card Game from a small team of industry veterans that combines elements of MTG and Hearthstone, with their own innovations on the genre.