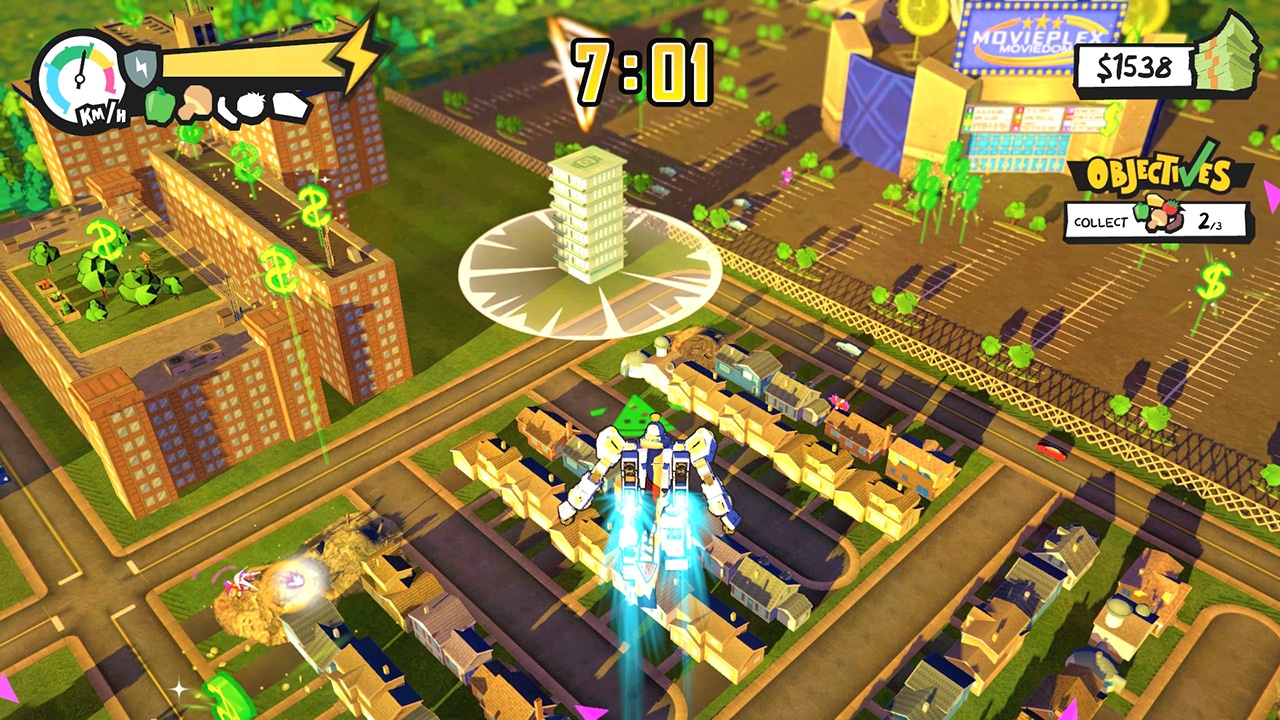 If you got a craving for pizza, you know who to call! Delivered right to your living room by a robot ten stories tall! These are the first words you’ll hear upon starting up Pizza Titan Ultra, and it’s hard to deny that they do a pretty good job of summing up the premise! Pizza Titan Ultra is indeed a game about a giant mech delivering pizzas – in fact, the mech isn’t just for delivery, but contains the entire restaurant within itself; a vision of the future I think I can get behind.

If you’re wondering what I meant when I said ‘the first words you’ll hear’, wonder no more: Pizza Titan Ultra has something I can’t remember seeing in a game for a long time, which is an actual honest-to-goodness theme song. It comes complete with karaoke-style lyrics on the main menu and everything! It’s an uplifting way to start a game, and it gives an immediate impression of a sort of Saturday morning cartoon kinda vibe, which I think is something that developers Breakfall have baked in throughout each delicious slice of the entertaining dish that is Pizza Titan Ultra.

Pizza Titan Ultra feels like an affectionate parody of a season of a Gundam-style mecha anime, although I’d be inclined to think that if it were an anime then the events of the game might be the second season rather than the first; there are a number of references in the narrative, such as it is, to things that happened before the game picks up the story. We learn in the Star Wars-esque opening crawl that five years ago, a peculiar mouse-robot thing named Cheezborg attacked Galactic City but was defeated; at the beginning of Pizza Titan Ultra, the player (in classic visual novel style, as an unnamed and unpictured mute) joins the crew of the Pizza Titan mechstaurant as the new pilot, and from there we move into a mozzarella-strung-together plot that’s really just an excuse to have a good time and make pop culture references. 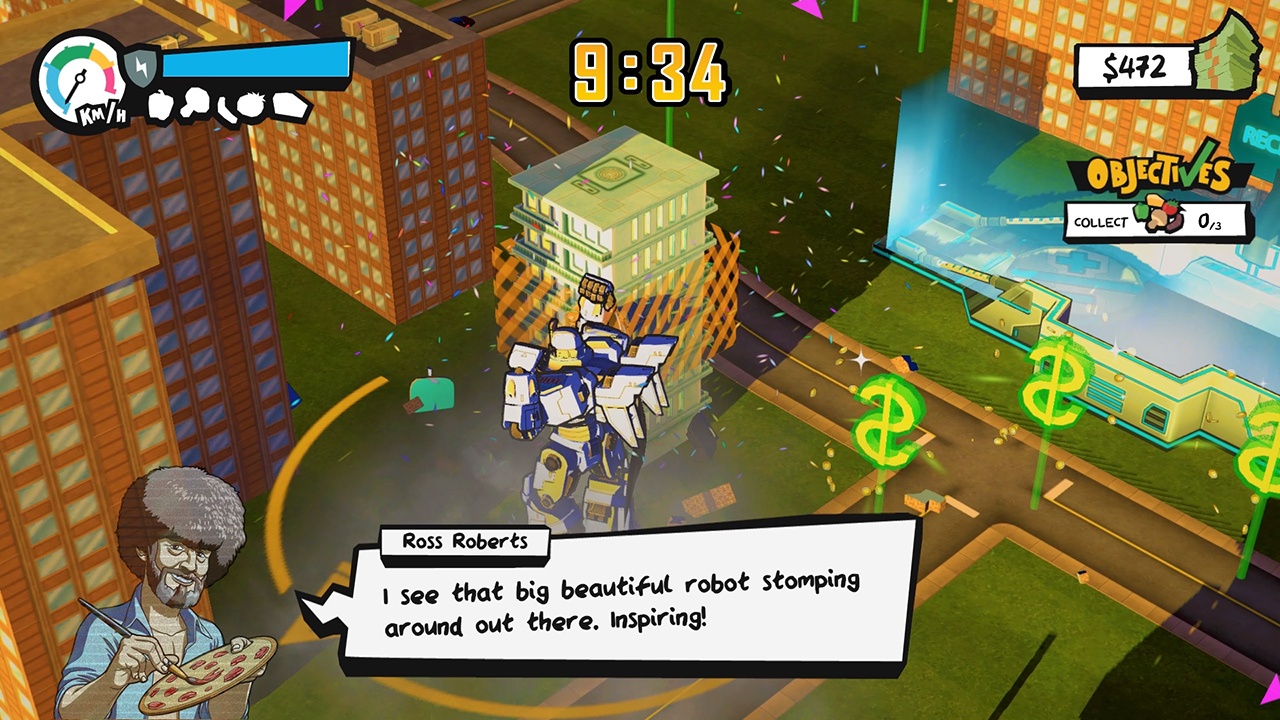 The cyclical (or crust-shaped, if you like) progression of Pizza Titan Ultra unfolds like this: through completing missions, you get cash. Once you’ve completed three story missions in one area of Galactic City, you can use the cash to open up a new area – if you haven’t got enough, you can replay missions or undertake a sort of time-attack free mode in which the only goal is to make as much money as possible – in which you can do more missions! The plot unfolds through visual-novel-lite segments presented at the beginning and end of each mission: the crew takes a pizza order from a caricature of a figure from pop culture and learns something about the ominous return of Cheezborg, then delivers that pizza by firing the mech’s rocket fist directly into the person’s home, taking out a huge chunk of hopefully-not-load-bearing wall in the process.

Over the course of the game, the threat of Cheezborg develops from ‘oh heck, there are little cheese robots’ to something along the lines of ‘Cheezborg is a mad AI who’s resurrecting himself to destroy the world’ – or, in fact, simply to put Pizza Titan out of business, since he can’t stand having a rival pizzeria. It’s not really super important, to be perfectly honest, and I don’t mind that at all. Some games are all about telling powerful stories, and some string together a bit of a plot just to give a reason for amusing things to happen, and that’s OK. Pizza Titan Ultra knows, I think, that it’s in the latter kitchen, and just kind of leans into it by lampshading everything as hard as it possibly can.

As for the missions themselves – which is to say, the huge bulk of the gameplay – they’re generally pretty fun. It’s simple to pick up the controls: move around, break into a run, kick or punch, jump – you know, the usual. In ‘free’ missions you’ll just be delivering as many pizzas as possible within the time limit, which plays very much like a souped-up giant robot version of Crazy Taxi in that you’ll get more time added on with each pizza you deliver, so building up chains of successful, speedy deliveries will allow you to keep going for longer. Story missions have ancillary objectives: they’re still timed, though, so continuing to deliver pizzas around the map (or grabbing bonus time pickups) will help you to keep the game going long enough to complete your mission.

There are a couple of fun little additions, such as ‘walk-in’ customers: people you can just find wandering around the city who’ll ask you to make them a pizza on the spot, which triggers a short Cooking Mama-style minigame. Plus you’ll want to spend some time gathering Ultra Ingredients – ‘hidden’ items which give you a fair amount of money for finding – and cash pickups, since you’ll need some dollars to add new parts to the Pizza Titan mech. Parts are mostly cosmetic, but purchase a certain number and you’ll unlock a new special move, such as a sprint or powerful laser attack. 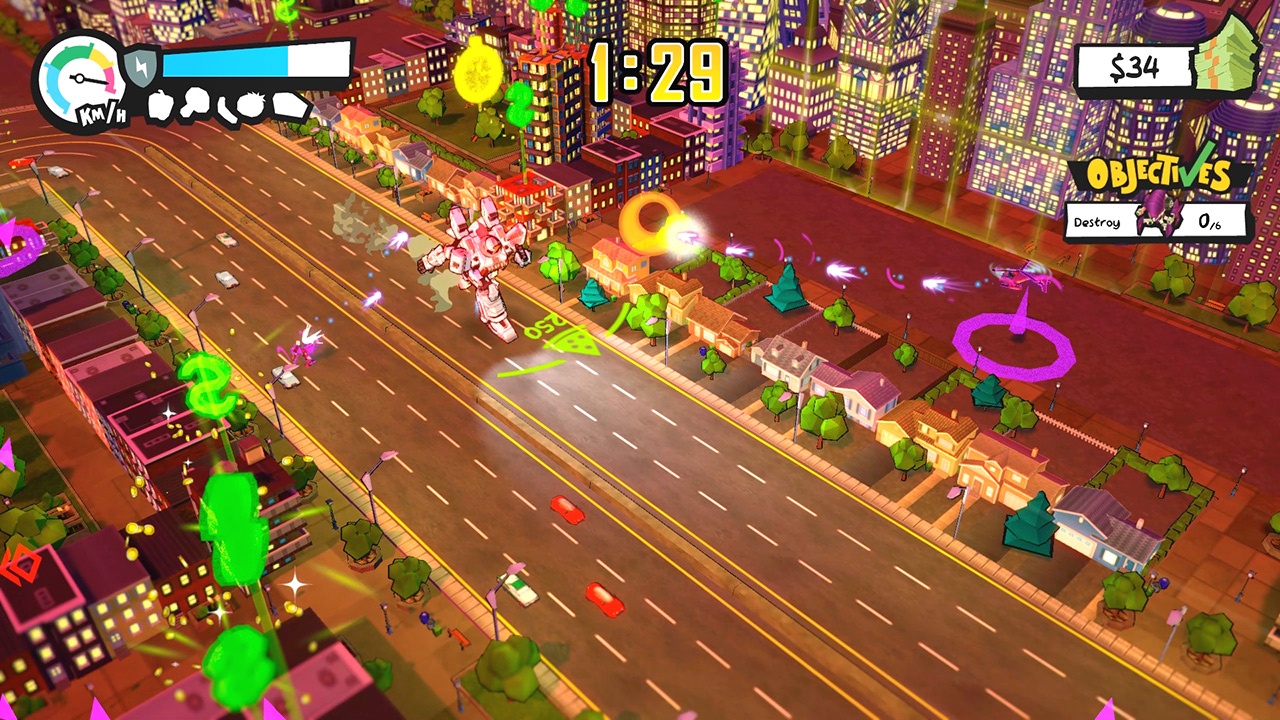 As the game progresses, the objectives become more numerous and more difficult. You’ll start out punching a few helicopters, but eventually you’ll be required to smash a whole ton of more dangerous opponents while also avoiding doing damage to the city’s many buildings (for example, although there are a whole lot of other potential combinations). Cheezborg’s cheezbot forces become more ferocious, too, and Pizza Titan Ultra goes fairly quickly from ‘I don’t have to worry about health at all’ to ‘avoiding death is a big problem right now’ somewhere around the missions in the low teens. That said, I don’t think the difficulty ever reaches the point of being frustrating for the wrong reasons.

Breakfall have put together a pretty well-constructed game by most measures: it’s really nice to look at most of the time, with bright colours and easily-distinguished sprites, and the audio isn’t hugely memorable (other than the main theme, of course) but always feels like it’s doing its job. Gameplay flows pretty smoothly the majority of the time: from a technical perspective, there are a few noticeable instances of slowdown when too much is happening onscreen, and I had two instances of the game just completely freezing on me during my playthrough, but other than that there are few glaring problems. There are a couple of little things that I think could have been ironed out – a character references ‘adding’ a direction indicator to the HUD at one point, but it had been there the whole time! – but they don’t tend to detract from the overall experience, which is a sort of amusing, easygoing chaos.

You might find yourself getting a little fatigued by the time you reach the end, since the gameplay never really changes in any significant way beyond your objectives evolving, but I think Pizza Titan Ultra is more of a pick-up-and-play sort of game, something you can spend an hour on here and there between more ‘serious’ gaming experiences to unwind. And that’s great! Games like this need to exist, and Pizza Titan Ultra is, for my money, a well-worthwhile bit of fun.

If you got a craving for pizza, you know who to call in Pizza Titan Ultra.