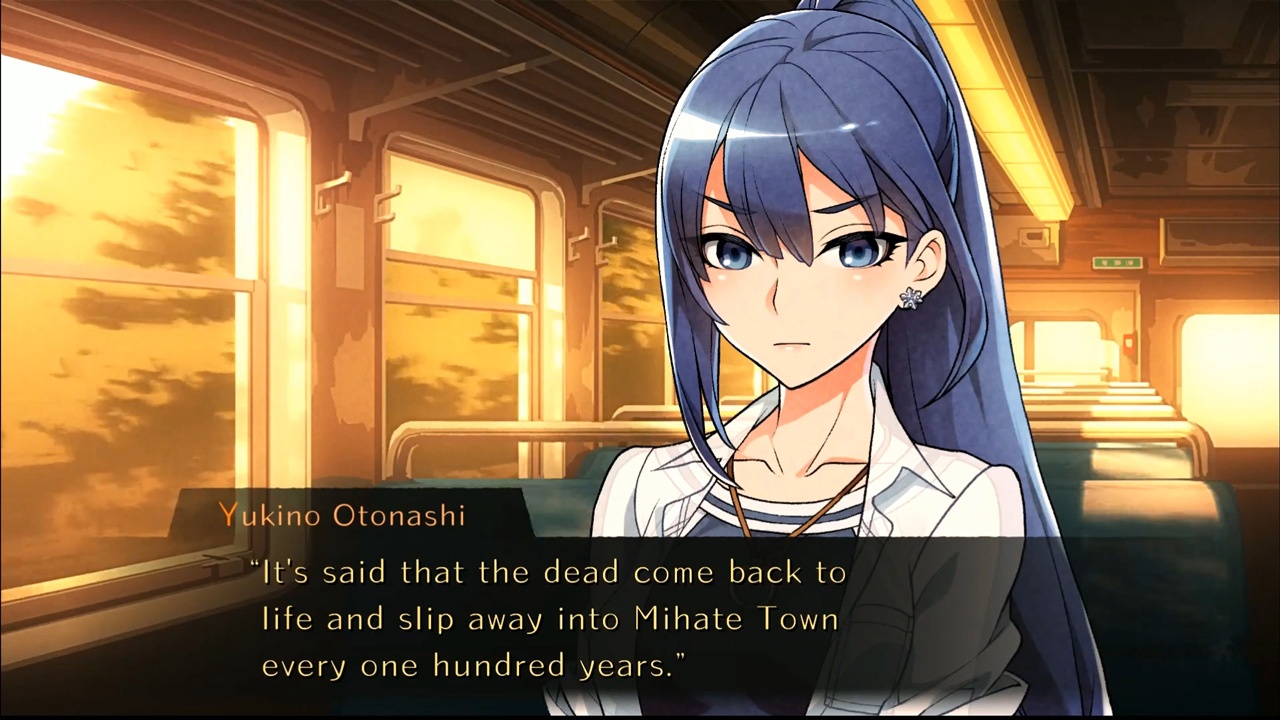 Balancing genres, especially within video games, can be especially difficult. Far too often, a title that’s attempting to wear two different hats at once tends to lose direction and become an unfettered mess by the end. Looking into World End Syndrome, which comes to us from Toybox Inc. via Arc System Works, you might be confused as to which angle you approach from. Is it a romance dating sim? A slice of life visual novel? A mystery/horror investigation title? Surprisingly, the game is all three, and, for the first time in a long time, I felt utterly compelled to play this game for as long as humanly possible to find out more and get more details. It’s not just the content of World End Syndrome that drags you in: it’s the execution and razor-thin tightrope of comedy, romance and thrilling horror that keeps everything perfectly in check.

World End Syndrome puts you in the shoes of a male protagonist who has recently moved to the sleepy little town of Mihate. There’s a mansion here that belongs to his uncle, and he’s moving here in order to get a new start on life after the tragic loss of his sister last year (don’t worry about spoilers: you learn this, without any choice, in the first 20 mins or so). Mihate Town is unique in that it’s home of the legend of the Yomibito: a spirit of the dead that returns to life every one hundred years or so, unaware that it has passed and growing slowly more dangerous and insane as reality sets in. Naturally, this is the one hundredth anniversary of the last time a Yomibito was seen, and odd events have started, such as the disappearance of a highschool student. You, along with the fellow members of the Mystery Club that you’ve unceremoniously joined, work together to solve a number of interesting cases, such as the missing (and probably dead) student, the true nature of the Yomibito and the families connected to the history, and about the secrets everyone seems to be keeping…including the protagonist himself.

World End Syndrome does a fantastic job of hooking in the player almost immediately with a well played bait-and-switch technique that I’m almost loathed to spoil, but must in order to convey what the game is like. You see, the website and the Nintendo page for World End Syndrome talk about a lot of factors, elements and choices that a player might be utterly confused about, simply because they don’t exist the first time around. You have to play World End Syndrome for a full “ending” in order to unlock the real game, and it’s done in a seriously clever way. Initially, the game feels like a traditional (if exceptionally pretty) visual novel, with a couple of inconsequential choices but mostly kinetic. The only thing that might clue you in that something is amiss is the fact that the opening song, which is often a cornerstone of visual novels, is mysteriously and suddenly cut off by a broken celluloid effect. So, as a result, you move forward, totally unaware what’s happening, until the ending drops on you like a ton of bricks…at which point the real game opens up. 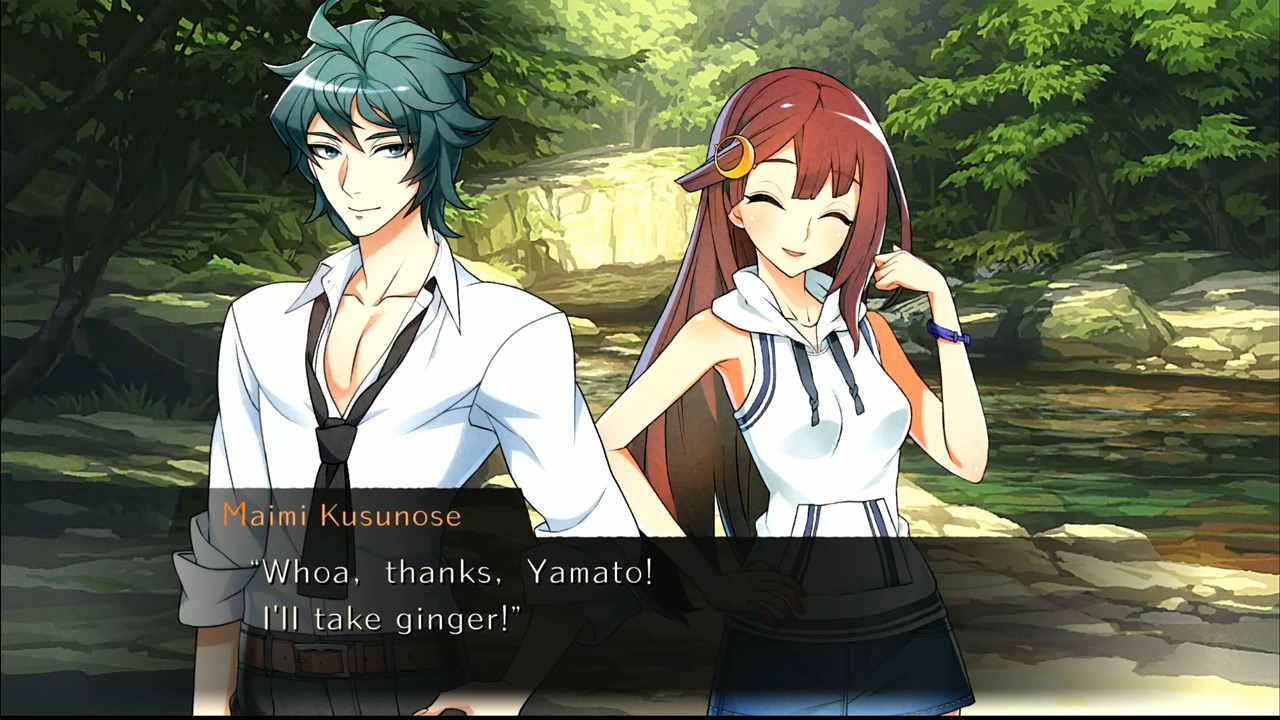 The timeline for World End Syndrome keeps the player busy from the beginning to the end of August, with almost every day having three choices for what you can do in terms of location. In the space of four weeks, you need to figure out the mysteries of Mihate Town, as well as creating relationships (some stronger than others) and discover a ton of lore that’s locked into the game. Each segment of time (morning, afternoon and evening) asks you to travel to a different part of town and explore different areas, such as the beachside cafe, the lonely hospital, the ominous bridge and the aptly named Sacred Lands where people mustn’t go (I know, we all realize the hypocrisy, let’s roll with it). By chance, every place you visit at every time has a different opportunity to meet with someone, at which point it can be an inconsequential conversation, a relationship building moment, or a chance to partake in a mission which will give you different rewards. The rewards vary from collectibles that add to the mythology of Mihate, random photos that you might want to look at from time to time (example: Maimi in a bikini, because why not) and added relationship points to build towards that grand finale of what may or may not be.

World End Syndrome does a phenomenal job of taking a fairly massive project of a game and making it very approachable, even for brand new players to visual novels and dating simulation games. Firstly, the mechanics for the Switch are very well executed. Everything is button based, but you’ll have no problem bouncing between menus and choices, and the number of save slots available are sprawling. Moreover, the simultaneous double save system means you can reduce the amount of playtime significantly. As you save your main game, the software is also saving an “overall” data map, so that, should you reload a save or start over again, it not only allows you to fast forward through text you’ve read before, but also are aware of what choices will lead to something. So, for example, if you encountered Saya and Hanako at the hotel on the afternoon of August 11th, the next time you play through that day, there’ll be notifications that you’ll encounter them at that place so you can plan accordingly. This is fantastic for getting to the replay of things quicker, and working towards the routes you want to achieve the most.

Additionally, the game is absolutely drenched in extra information and clever asides from the game itself. For most conversations, you’ll run into words that a character says that are highlighted in orange, meaning you can hit the “+” button and read more context for what people are talking about. This ranges from historic significance to why things are set up in Mihate Town, to expansion into the world that exists in the game but outside the town (example, the Pop group ZZ Panda), to asides about the characters and their personalities that feel more like outside gossip and critique than actual information (Kensuke, mostly). Some of it is important to better understand the motives of certain characters (particularly the Yamashiro family), but most of it is just atmospheric, allowing you to enjoy the game fully from start to finish.

World End Syndrome does so many things right in terms of creation and execution for the story at hand (which is a good one overall, but pushed to greater heights by the design itself). Visually, this is one of the more pleasing and enjoyable simulation/visual novels that I’ve played. The character models are alright, cute and interesting but nothing particularly groundbreaking. You’ve got the teacher with a massive chest and a heart of gold, the spoiled rich girl who might secretly dream of rubbing elbows with the common man, a shy introvert and a bombastic pop idol who are definitely not the same person, and several others that have their own designs and moments of close up portraits. But it’s the background and the framing, strangely, that really make it for me. Unlike most visual novels, a lot of the locations you visit in Mihate town have just a bit of dynamic nature to them, which makes all the difference in the world. From the very beginning, when you’re on the train and talking to Yukino (the first character you “meet”), you can see the background whipping by in the windows. Pinwheels along the walls of Mihate spin slowly in the breeze, and, when the weather turns sour, you can see the rain beat down on the sidewalk outside your school. There’s nothing photorealistic or crazy about these movements, but they draw the eye and put you deeper into the environment of the game, making it feel more engaging and less “I’m watching a play.” 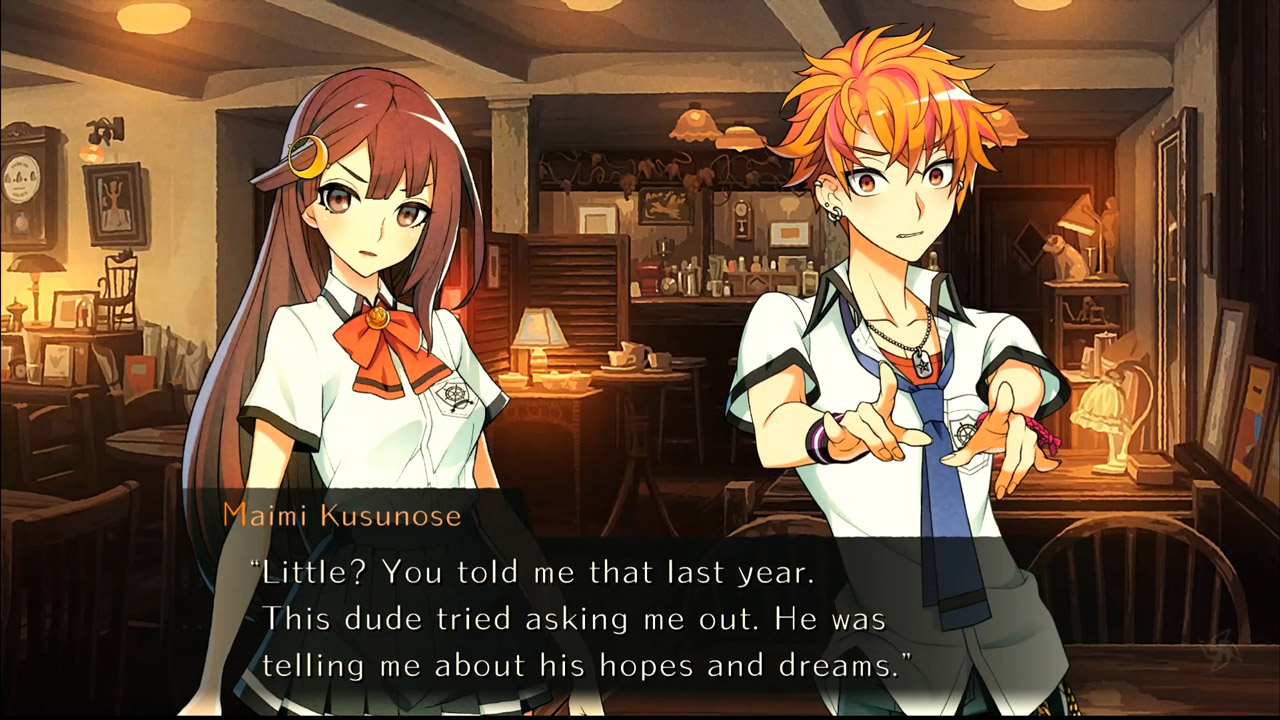 The writing and delivery is also shockingly good. More often than not, World End Syndrome had to go out of its way to remind me that there are terrible things afoot because I got lost in having a good time conversing with everyone in the game. The detective who seems hellbent on breaking the law to arrest a child, the manservant who appears and vanishes like a ninja at the behest of his liege, and, especially, Kensuke. Kensuke is such a stereotypical foil of a best friend character that you can’t help but love his nonstop interjection into the matters at hand. He can and will take things seriously when need be, but it doesn’t happen a lot, and his one track nature brings out the best in the ribbing and roasting from everyone else. You have so much fun that you need to literally see someone get murdered to bring you back to earth, and now you remember that it’s your second time playing, something bad is afoot, and you’re running out of time till the end of summer, where something is DEFINITELY going to happen. Toybox Inc.’s choice to voice only important moments gives gravity to the game and allows you to see when you’re on the right track (you hear people talking) and when you’re just wasting time (they speak, but you can only read it). There are still moments that I fast forwarded through so that I could try approaches again, but there are some moments, like the presentations during the camping trip, that I had to read again because it’s so well balanced. Humour, philosophy of life and death, elements of Japanese folklore…I’m certainly impressed.

I haven’t yet achieved the “True” ending of World End Syndrome, but the path seems clear, though I’m certain there are twists and turns that I haven’t yet anticipated. Once you get your second and third endings with the different girls (hint: focus on the aura points that come from good interactions and try and stick with one color), you get the feel for what needs to be done, and the rest is trial and error. Don’t be afraid to have several save games at once, and be sure to look into your collection for clues as to what you might want to do next. It’s so refreshing to have a visual novel/simulation experience that hasn’t already been on PC for months, and to let players try something new that works on a console fantastically. Definitely consider the Switch version for portability and convenience, and consider the physical copy if you want those mission photos to exist as a hardcover art book. If you’re at all interested in a good mystery thriller with some bloody elements and some eyebrow raising moments of intimacy (no sex on the Switch, don’t worry), then you’ll want to come journey to Mihate yourself and see what happens…when the world ends.

Dark, thrilling, romantic &amp; hilarious, World End Syndrome ticks all the boxes of what an engaging and enjoyable simulation should be, right down to the endings.