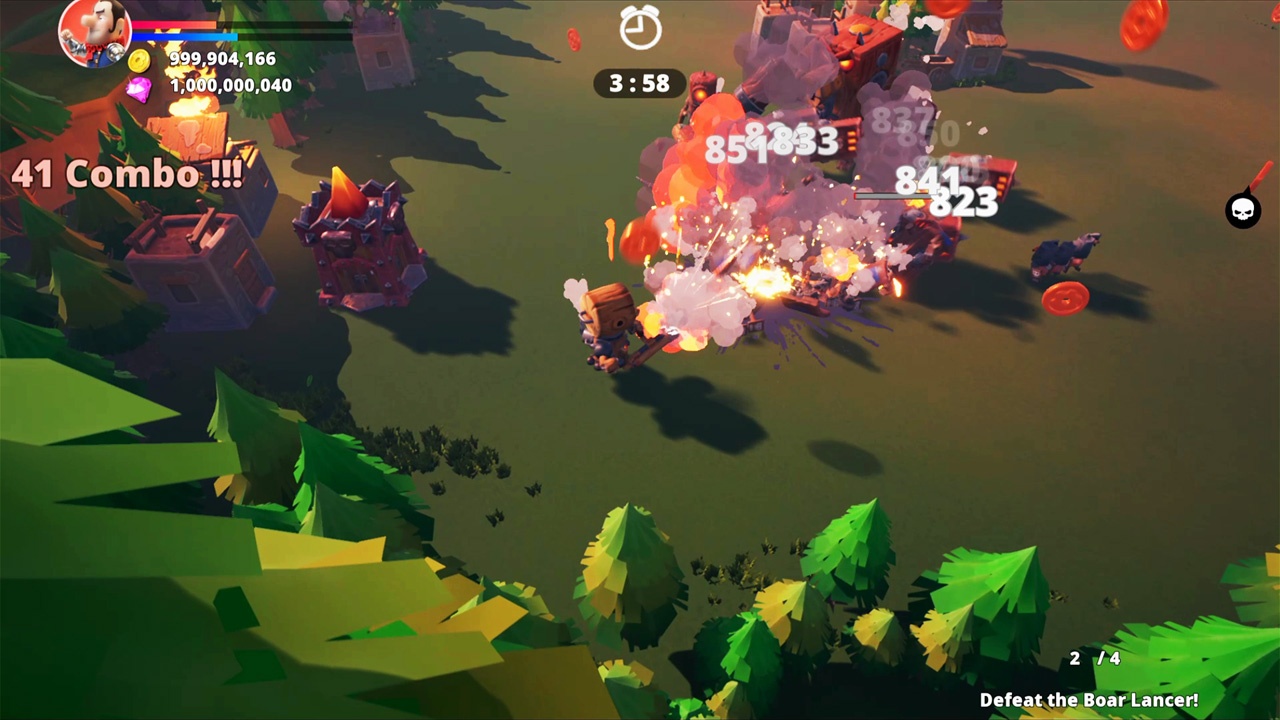 With the recent rise in Mecha style games, now and then something comes along that stands apart from the rest of them. Different enough that most fans will overlook or dismiss these titles for something more traditional. They want the more high-speed action game though space than a lumbering wooden doll marauding around a small map. Machi Knight -Blood Bagos- lays more to the latter, and with this could wrongfully be an unrated game. Most could be fooled into thinking this is a kids game, but it can be very challenging.

Not only is MachiKnight -Blood Bagos- a competent action hack and slash type game, it also has an element of an RPG in there. In the form of levelling up the pilot and the slow upgrading look to the Knights. Each going hand in hand with each other. With all that MachiKnight -Blood Bagos- can also be played alone or with one other with local Co-op.

Machi Knight -Blood Bagos- is set in a world not too dissimilar to our own, on the surface it looks set in the middle ages. Simple houses made of wood, stone and mood huts, lush green fields not destroyed by advancements and giant wooden robots known as ‘Knights’ spewing Fire or swinging giant maces around to annihilate enemy combatants. Taking the mantel of one of three noble men, piloting their own Machi Knights, it is up to you to stop the evil Kenos organisation from reviving the long-lost weapon Bagos, The Giant.

The stories premise is a simple one, but as the levels are completed, the game shows snippets of the story in the form of a book. MachiKnight -Blood Bagos- drip feeds small bits of information on the three Machi Knights and their personalities along with the current events happening within the world. I felt the story could have been fleshed out considerably more, there is enough in there for players not to get distracted by a big story, as for me being a lore nut, this was just not enough information. 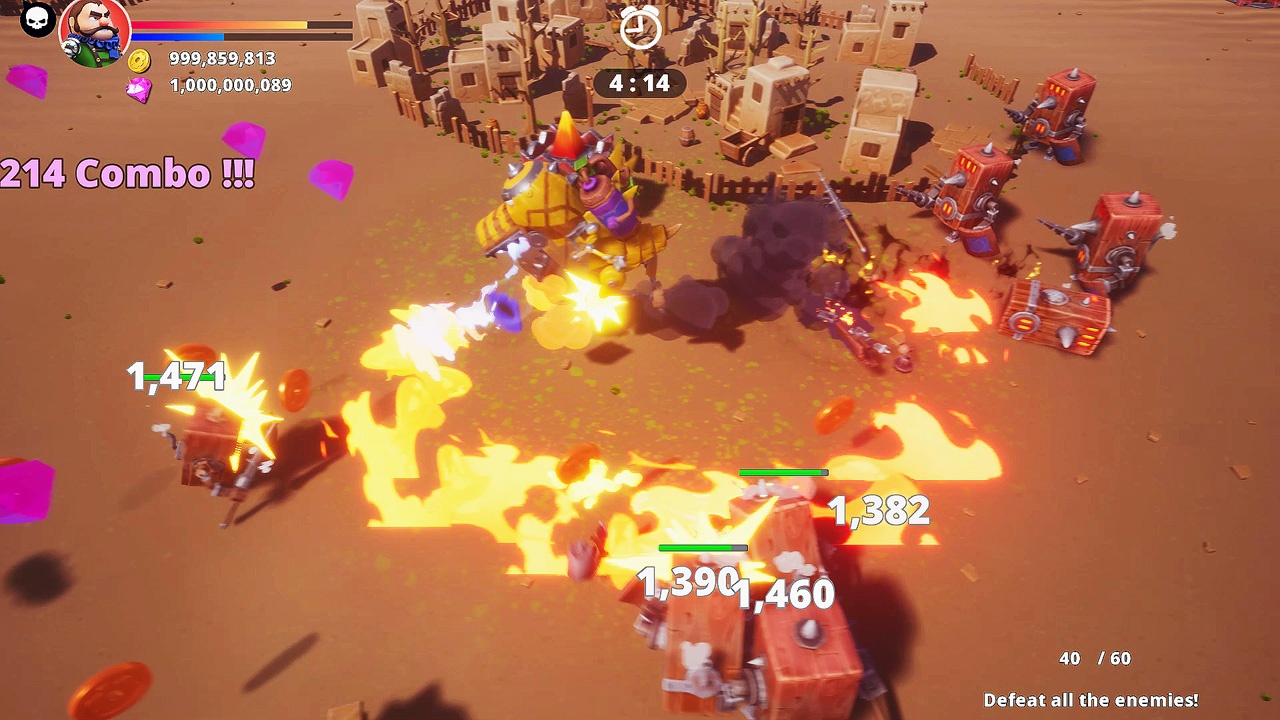 When starting up MachiKnight -Blood Bagos- the first thing that will be apparent is how sublimely beautiful the game is. MachiKnight -Blood Bagos- has a cel-shaded cartoon-like feel to the character models and the world around them. Vibrant bright blocked colours of the wooden knights and the more advanced units. To the subtle changes in the grass colours, each one fitting the world perfectly. On closer inspection, there is a high level of detail on each Knight that is not overly apparent on a first glance. The explosions are glorious with Knights exploding in fire and smoke as they are blown apart and fall to the ground.

MachiKnight -Blood Bagos- is powered by the Unreal 4 engine, and it shows, with the number of things that can be happening on screen at one time, and the frame rate stays solid with no slow down I noticed, even with bullets flying Knights exploding more being dropped into the level. With the Unreal 4 engine, the lighting and shadows are excellent not to mention the fire effects.

When it comes to the audio for MachiKnight -Blood Bagos- it is diffidently a mixed bag in both soundtrack and sound effects. For the most part, the music is totally unforgettable, most of the time I did not even notice that there was any. This is not an overly bad thing, with everything happening on screen, especially on the harder settings, there will be no overpowering music scores to distract from the gameplay. On the world map, the music is more prevalent, and it gives the feeling that there is some impending doom on the horizon.

The sound effects for the player controlled Machi Knight is very well done, the mechanised sounds of gears grinding as the Knight walks, the rush of air over the axes while performing a spin attack or the sustained shots of a Gatling gun sounds outstanding. I had the feeling that I was piloting a Machi Knight that packed a punch. However, then trash mobs don’t get as much care, sound effects are not as good of quality. Sound quality is viable enough to know that one mob is shooting at the Machi Knight or that the Machi Knight killed the few human enemies with a loud scream. It seems as if the developers wanted to keep the focus on the Machi Knight. Making the external noises quieter leads to the feeling that you are again the pilot.

Overall the audio does a good job of allowing the player to feel as if they are in full control of the Machi Knight, while not detracting from that experience with external sounds. The external sounds are there to facilitate the fact the enemies are there.

The game revolves around the three Nobel pilots and their Machi Knights. Each Knight looks and plays different from the last, they also have three different weapon types that work differently changing gameplay even more.

There is no Machi Knight better than the other while playing it will be down to personal preference and how each Knight and weapon set to fit your play style. For my playthroughs, I swapped between Musket with a Gatling gun and Fire with Oil barrel (also Fire is a DRAGON!). Melee just did not feel right to me in this game, that is not to say no one will like to melee, it was just me.

Each Machi Knight has a health bar and a steam bar. The steam bar allows for the Machi Knight to perform specific actions, one shared action is dash and this uses a set amount of steam, and all Machi Knights have to utilise dash to survive, as it grants invulnerability frames. Two more specific actions are depending on the equipped weapon. For instance, Gatling Gun can throw a bomb to do high damage in a small area as well as a power boost that lasts for 10 seconds, improving damage per bullet. Once the steam bar has depleted, the best way to replenish it is to use the standard attack, this will in a single combo attack refill the steam bar enough to perform a special attack. With this in place, the hack-and-slash becomes more tactical, and resource management is a must.

While amid battle, items will drop from fallen Knights. These range from, health pickups, shield, power and speed boost. Making sure that the Machi Knight gets as many as these as possible is at time vital for beating the levels, especially on Hell mode (hardest setting). 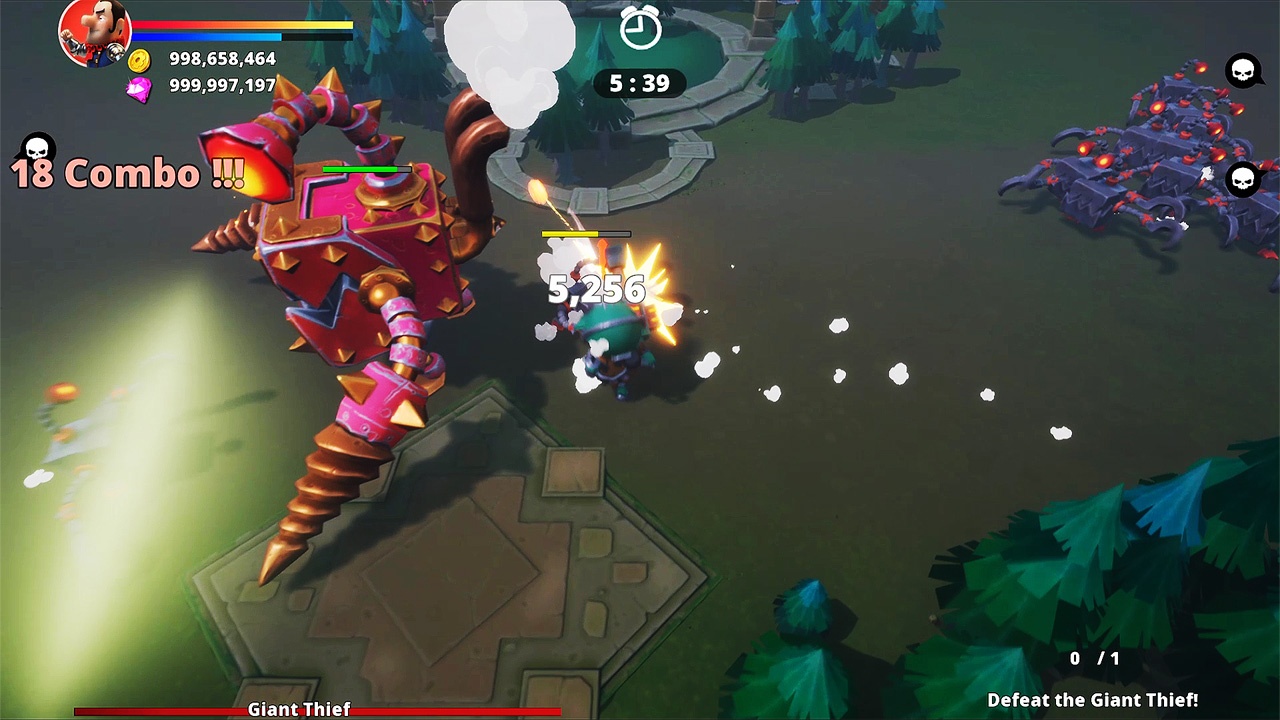 MachiKnight -Blood Bagos- is not a perfect game; there are one annoying design choice and a few irritating issues within the game. The design flaw is with the Musket Knight, there is an auto lock on the closest enemy, that can not be turned off. Usually, this would not be much of a problem, with MachiKnight -Blood Bagos- it is. You could be trying to take out one of the bigger Knights to finish the mission moments before the Knight is killed the Musket will spin around to a small trash mob and shoot at them, meaning moving towards the original target. It would have been better if the Musket worked like a twin-stick shooter. Fire class has a somewhat similar annoyance when using the Spew Fire ability the Knight can walk about at half speed but cannot change direction it is facing.

Some of the other problems I noticed where at times attacks did not hit, for example, I was swiping with my axes (I at least tried melee) and one small Knight walked close to me I could not hit it. Having to dash away and move back to attack it. The problem also affected the Fire Knight’s melee attack with it missing, as well as its fire attacks. The Musket Knights other problem was with the bomb attacks. Bombs are aimed by the direction the Knight is walking. More than once the bombs would be thrown in the opposite direction to where the enemies are as the Musket Knight was walking away from the mob.

The Map is a beautifully designed island with differing biomes and has a series of nodes that indicate levels, once the current level is beaten the next node is open. Each level is timed, making sure the action is none stop, on top of this there will be an objective to meet to finish the level. For example, kill 30 Knights. These are all simple level designs but is easy to be overwhelmed by the enemy, more so when facing bosses. Even on normal, a boss can one hit the Machi Knights in battle and it is game over. When boss battles start, there will still be normal mobs as well as the bosses. Lucky for most of the bosses attacks, there are indicators on the floor, showing where the attack will hit along with telegraphed attacks. Most of the boss fights are more an endurance fight then overly hard.

After a level, you can upgrade the Machi Knight. While in the hanger (of sorts) this is where the RPG element comes in, with some lucky RNG. The pilots can be upgraded in four ways damage, health, crit attack chance and crit damage. These are all increased by spending money, each level the cost will increase with every level. Money is readily available every enemy destroyed drops some.

While in the hanger weapons can be equipped also. To get new weapons gems to need to be spent on weapon boxes, these range from level one to five, the higher the level the more gems they cost. The tradeoff is the more passive abilities the weapon can have equipped (as well as damage increases). Each weapon box will have three random weapons within them for the currently selected class. With this in mind, weapons can be combined. Combining weapons allows for a single passive ability to be swapped out for a different ability that the weapon being used to combined has. Gems are gathered in two ways, killing bigger enemies and Bosses, as well as selling weapons that are not used.

Overall MachiKnight -Blood Bagos- is a fun, exciting action RPG, that is on the simple side with all its mechanics. This, however, allows for a quick jump in and play games. With my time with it, three hours passed, and I didn’t notice thanks to the frantic passing and the smaller levels where everything is drawn towards the Machi Knights. This will not be for all Mecha fans as it is not in-depth in any way shape or form. I feel an opportunity was missed making the mechanics simple. If you are looking for something fun to play, that looks beautiful and has mechs with tons of customisability then I have to recommend this.

MachiKnight -Blood Bagos- is a fun, exciting action RPG, that is on the simple side with all its mechanics. This, however, allows for a quick jump in and play games.