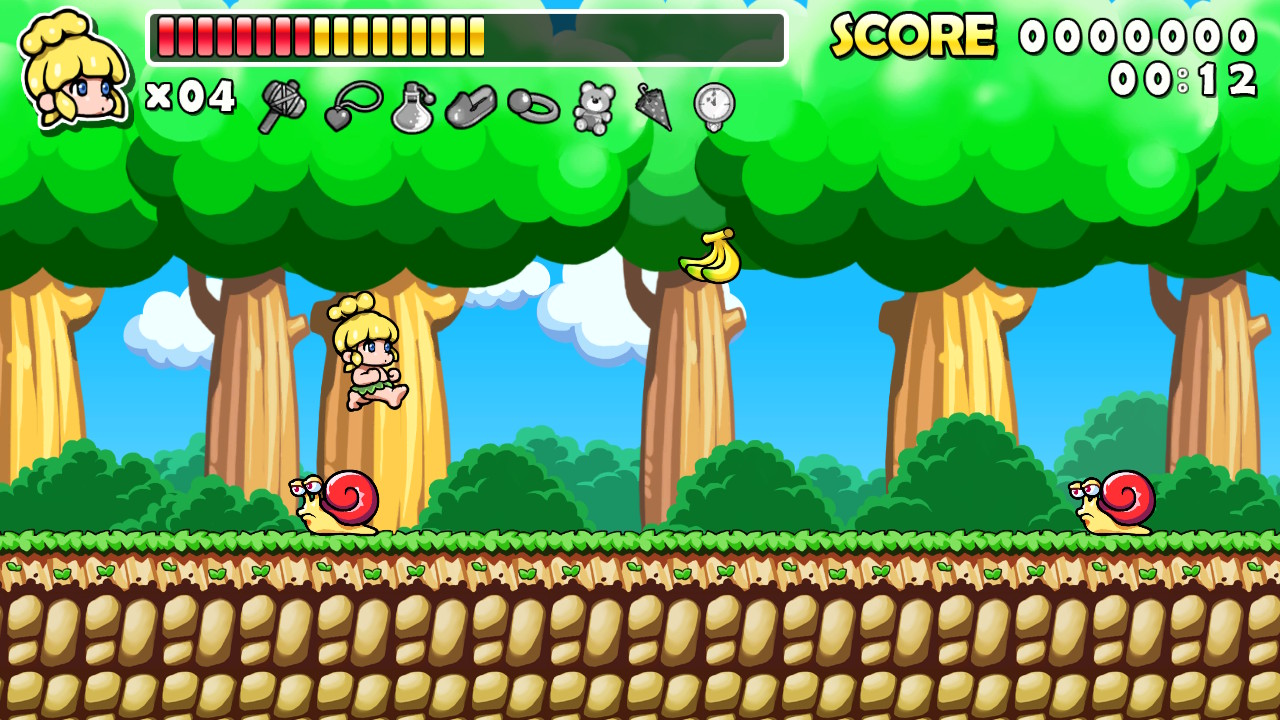 Growing up as a Nintendo kid with a little bit of Sega influence from my best friend (who, naturally, enjoyed his own style of video games), I sometimes feel like I missed out on some great titles through sheer ignorance. Sure, I knew about Sonic and Mortal Kombat (mostly because the latter got an SNES port), but things like Kid Chameleon, Rinstar and even Toejam and Earl didn’t crop up on my radar until emulation was in my wheelhouse. Since I was firmly entrenched in the land of SNES, the OG Sega Master System totally slipped under my radar, and it honestly didn’t even show up until much, much later. Thankfully, Sega and CFK decided to really reach back into the annals of video games and bring Wonder Boy/Monster Boy into the present day in a big way. We’ve had Wonder Boy: The Dragon’s Trap. We’ve had Monster Boy and the Curse Kingdom. Now, we’re going to where it all began with Wonder Boy Returns: Remix.

Wonder Boy, the original in 1980, was a pretty great title for its time (which I can attest with a comparison to other games from that generation). Right before the big video game crash, companies were still dumping money into titles, expecting to get a full return on their efforts, and it shows with Wonder Boy. You play Tom Tom, a caveman who’s just hanging out, having a good life, when his girlfriend, Tanya (formerly called Tina), gets kidnapped by an evil devil dude. Naturally you’d like to get her back, but Tom Tom is facing the classic issue of people alive at this time (and any time, really): he needs to eat. Like, all the time. Tom Tom needs to continually, constantly grab food as he runs by, or he will simply drop dead in the middle of the level. Also, for some reason, it’s not just food you’d expect a Paleolithic person to eat, because there’s very little meat and quite a few fruits and vegetables (and, on occasion, Japanese yogurt drinks). Anyways, one hit kills you, you can starve to death, your fullness drops exponentially from tripping over a rock, and that’s all before you reach the first boss. 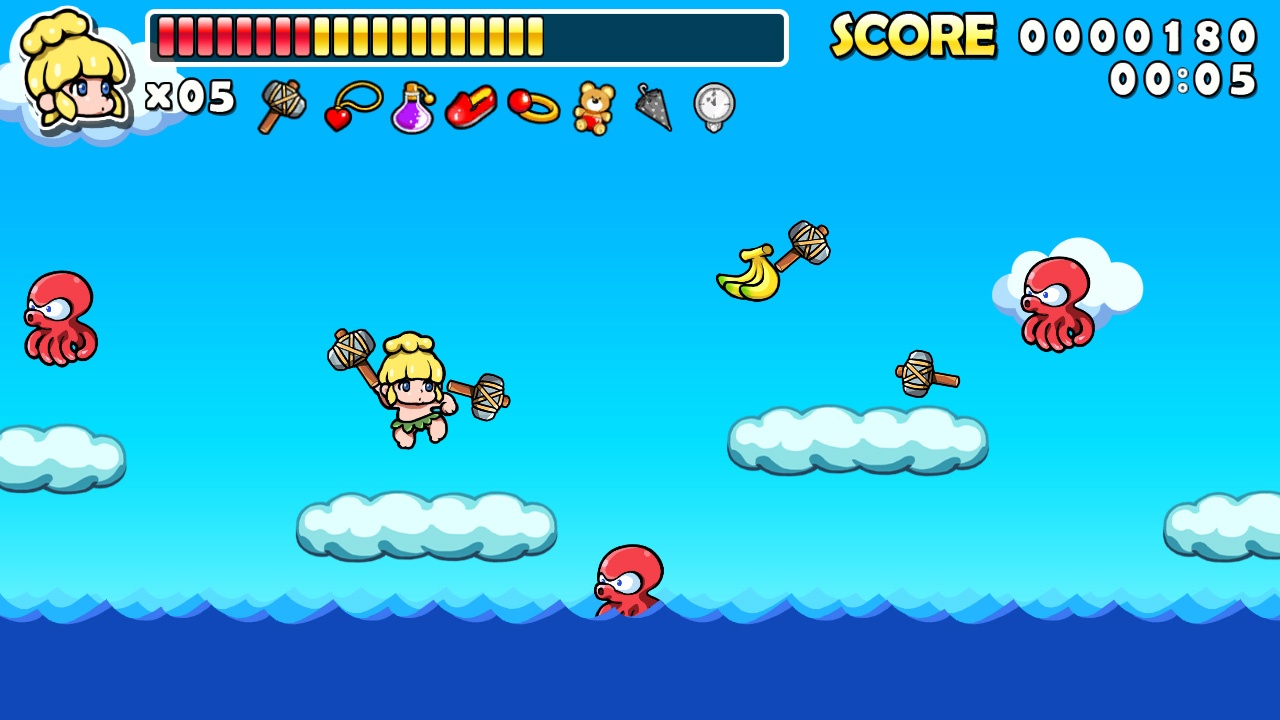 With Wonder Boy Returns Remix, there’s a few things you should know. Firstly, the “Remix” part of the title does nod to the fact that Wonder Boy has already “Returned” a couple of years prior. The version of Steam and other platforms that exist carry some (but not all) of the stuff that the Remix contains. This Remix contains several additional factors that we’ll touch upon in a moment, but the key is to not be fooled and think this is merely a moniker for Switch rebranding. CFK has actually done Switch owners a solid and incorporated some really great improvements and also shucked out some of the stuff from the original Return that didn’t quite fit in with the tone of Wonder Boy as a standalone update. The levels have been retouched, making them more akin to the original game, and the “classic” skin for Tom Tom has been shucked out. The fact that the original creator of Wonder Boy, Ryuichi Nishizawa, was brought in to keep faithful to how the game was is nothing short of amazing. Also, the Remix is launching at the same price as Returns currently is on other platforms, so, if you’re a fan in general, I HIGHLY recommend grabbing the Remix.

Wonder Boy Returns Remix carries all of the caveats and difficulties of an arcade action game from the early early 80s, and I say that with a touch of nostalgia and appreciation. Enemy density isn’t off the charts, but you can and will be killed by bumping into most things. Sometimes the controls feel just a touch floaty, causing Tom Tom or Tanya to sort of overdrift and end up tripping over the side of a platform, resulting in an undeserved death. Especially if you’re playing the harder difficulty (dubbed One Coin mode), it can be stressful as hell to make those jumps, stop in time before running into fires, or time your jumps for when bad guys and obstacles come rushing at you from the left side of the screen instead of the right. Even picking up certain power ups can be a bit maddening: the skateboard allows you to take one additional hit, but it also speeds you along faster than your normal walking speed and can result in crashes earlier. The invincibility angel is a temporary protector against obstacles and baddies, but you’ll die all the same if you head off a cliff. There are always ways to help along your gameplay, but it’s entirely possible to overcompensate and ruin yourself. On occasion, there is a “dark angel” you can get that’ll protect you as long as it can sap your food bar. Once you’re in the red, it leaves, and you have just a few seconds to get more food before you die from exhaustion.

Still, the gameplay of Wonder Boy Returns Remix is also a great reason to keep playing. It’s the ultimate in classic style done with a fantastic modern flair. The graphics look even better on the Switch than they did on the PS4 and Steam versions, with minor tweaks such as segmenting the food bar and rounding Tom Tom and Tanya a bit more to made them pop and look more cheerful. You can do a whole stage in just a few minutes, but the entire game can take hours, especially if you want to get the best score. There are hidden spots in the levels that are incredibly unassuming, but jumping in just the right frame means that a giant arc of fruit appears, almost instantly filling up your hunger and gaining massive points. Grabbing Tanya dolls used to be a “target” in the original Return, and here they’re just big point gets if you’re aiming for that motif. The game floats, but it floats just like platformers did back in the day, and anyone who held a controller that only contained one joystick or directional pad will know how to accommodate. The soundtrack, full of robust sounds, steel drums and so much life, is a fully remastered version of the classic tunes, redone in a way that shows off what we can do nowadays with the right technology and the right score. 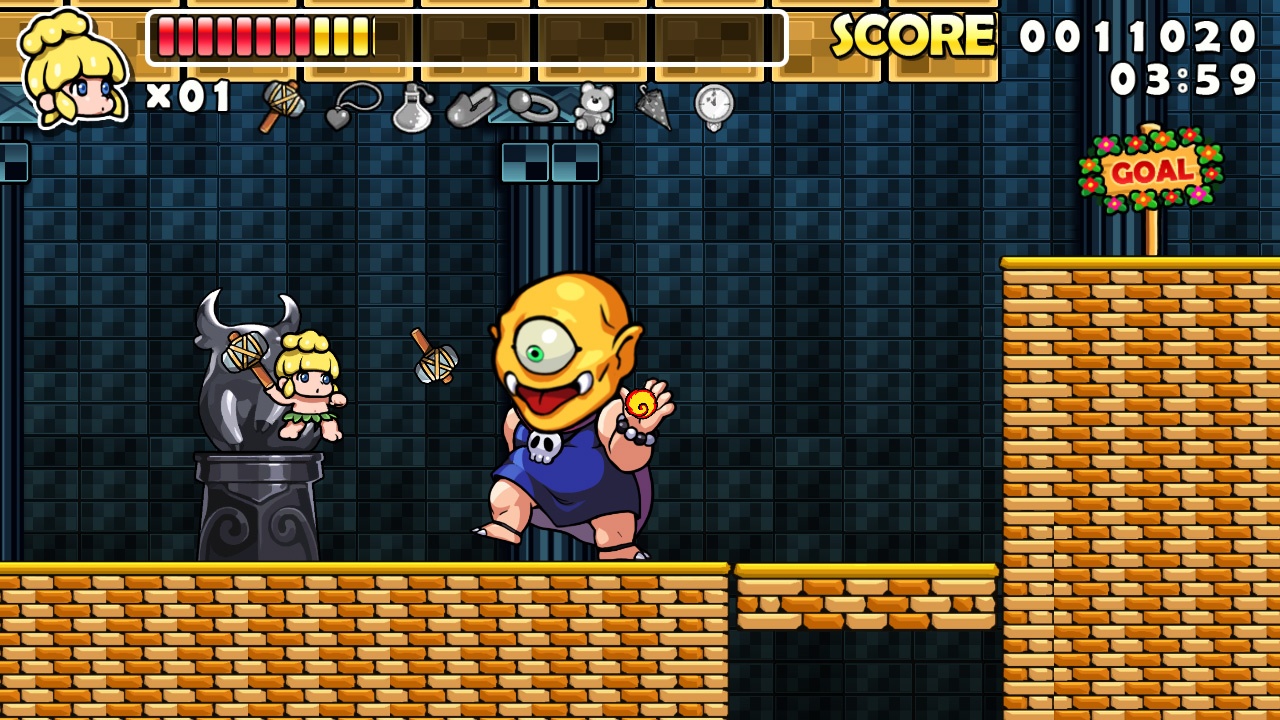 The extras for Wonder Boy Returns Remix also make for a better game overall. There’s now an easy mode where you can play as Tanya, on her scooter, with permanent angel mode enabled, so that you can soar through the whole game and see what’s on the horizon (but, again, fall deaths still exist, so don’t check out completely). The One Coin hard mode has a totally different ending from Tom Tom’s normal ending, with the added challenge that, while normal mode lets you continue from any point in the game, One Coin means you start from the beginning, have ten lives, and no do overs. There’s also a new mechanic: the Charge Shot, where you hold down the throwing button to toss a massive hammer (or boomerang, if you’re Tanya). The giant tool will smash multiple enemies and even obstacles before disappearing, and it can be a game changer at certain points where a ton of enemies appear (or when you’re just utterly done with rocks). It’s not 100% necessary to use, and it can actually hamper you if you’re too dependent and fail to realize it doesn’t affect bosses in the same way, but it’s a great addition and changes your approach overall.

What I truly appreciate about Wonder Boy Returns Remix is that it feels like a game I would have salivated over in my youth, seeing a commercial for it during Saturday Morning cartoons or playing on a television display in K-Mart. It’s got all the right moves because it’s a perfect copy of a classic game with all the best tweaks to make it appeal to today’s crowd. While there’s substantially less content than Dragon’s Trap (and leagues less than Cursed Kingdom), it’s great to see where the series started, and why Hudson went so far with their Adventure Island copy. The price is right, there’s a great amount of content, and it feels like a Nintendo game. I can’t think of a single reason why the platform loving, high-score beating, calloused-thumb crowd would pass on this. Wonder Boy Returns Remix launches on May 23rd, so be sure to get this as soon as it drops.

If the Nintendo Switch is the new home for Wonder Boy and Monster Boy remakes, then so be it: this updated classic is still a joy to play.