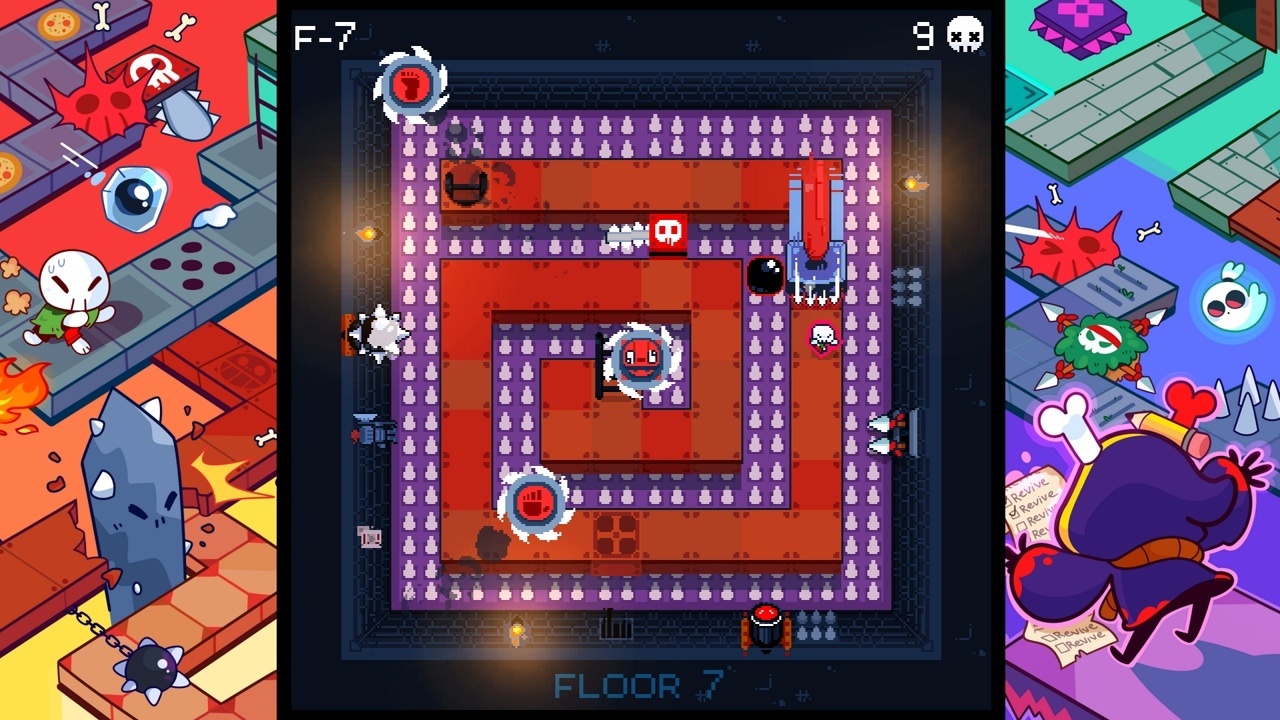 A clever title is sometimes enough to at least get you through the front door. While shorter titles like DOOM, Lost or Ghost can convey plenty through brief interjections, the existence of a book called “The Jewish-Japanese Sex & Cook Book and How to Raise Wolves” has driven me to bookstores around the country to try and find this absurdly titled tome. So I can see the mentality that was being used by BolHut when they were dropping a flagship title onto the Nintendo Switch. How could they make sure they weren’t lost in a sea of indie titles that crash upon the shores of the eShop daily? By making their name as long and memorable as possible, which is certainly how I ended up playing You Died but a Necromancer Revived You.

The title explains the “plot” of the game quite well, and there isn’t much more to be said. Basically, you were a do-nothing knight/peasant trying to invade this tower for some reason, and you get killed by a trap. Unfortunately for you, this tower contained a necromancer who decided to bring you back to life so that you could try again. And again. And yet again, because television doesn’t exist in this world and there’s some kind of enjoyment to be had by continually bringing people back to life. But at least you’ve got time on your hands and nothing else to do, because, well, you were revived by a necromancer: you sort of have to do what he says anyways, so you might as well make the most out of it.

You Died but a Necromancer Revived You plays as a procedurally generated speed trap runner that is broken into different “floors” according to the tower. Each floor has four rooms that is randomly set up with spikes, cannons, swinging blades and any other sort of trap you could imagine that kills you instantly if you step on or into it. Additionally, after a few seconds, the safe flooring starts to vanish/detonate behind you, giving you very little time to plan out your strategy and, instead, forces you to start running as soon as you can. Initially, this doesn’t seem like much: just keep it moving so that you don’t get killed, and, if you do die, respawn and try again. But the procedural generation is what keeps this spicy. Players are forced to very quickly look, assess, and do what they need to do before the room starts ending, and you cannot simply memorize trap and path timings like certain other games. This is all about split second reasoning mixed in with a healthy amount of luck so that you don’t step directly onto hell. 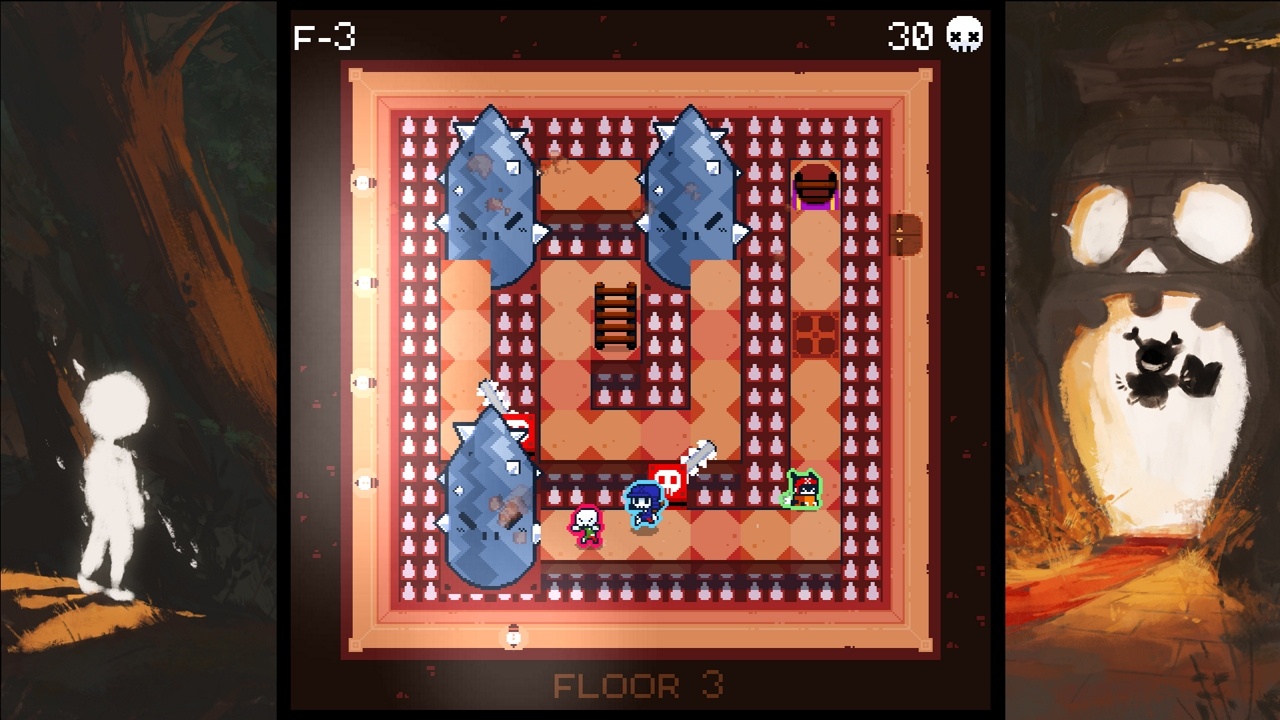 You Died but a Necromancer Revived You does its best to keep things fun and simple while still maintaining an edge. There are no other controls other than movement, and, due to the pixel nature of the game and the “retro” flavor that permeates throughout, you can forego the joystick and just use the directional buttons if that’s more your speed. There’s no worrying about jumping or anything like that: just stay alive and keep moving. There are unlocks that you can get through different achievements (finishing floors, more or less deaths, etc.) but they’re purely cosmetic and give you a variety of skeletons to choose from that are all, in terms of performance, exactly the same. Not only does this remove the stress of trying to get some kind of super character to do the heavy lifting, but it also transitions well into the game being a multiplayer experience. You can do the main story mode with up to four players, each player is intangible to each other, and only one person needs to survive to make it to the next level.

Yet the game is far from something overly simple. Each new checkpoint area of You Died but a Necromancer Revived You contains new twists and traps that screw up your previous cockiness from successfully getting to a new place. The traps upgrade to include a massive buzzsaw that seems to fire in any given direction and is utterly impossible to avoid. Making your way to the Mirkrooms means dealing with some Scooby-Doo style doors that teleport you around, complete with a massive ghost that will charge at you at the speed of sound. There are traps that you need to step off of IMMEDIATELY, traps that require you to stop because they affect the areas around them, traps that damage multiple areas randomly around the board…and that’s not even speaking about what happens when you finally reach the top of the tower and find the necromancer himself. I hope you enjoy bullet hell shooters, because things go from “I have to dodge a few things here and there” to “ALLOW ME TO WEAVE A TAPESTRY OF SORROW.” It’s insane, and it’s even crazier when you realize the Necromancer is essentially trying to get you to defeat him. Seriously, once you got this close, shouldn’t he STOP bringing you back to life since you’re beating down his door?

By and large, the presentation of You Died but a Necromancer Revived You is done extremely well. The install size is small enough, and the sprites and graphics are colorful, cute and detailed. I especially love the look of the massive blast furnace that strikes like Mega Satan, and each skeleton character has a certain charm about it. I especially liked the side art that’s added to the game’s borders, and recommend the MDLune theme, it’s quite charming. The music is fairly repetitive but appropriate given the tone of the mission and what you’re doing. Plenty of bouncy chiptune with a lot of bounce to remind you to GO FAST.  It’s got some good variety per floor, and it gets pretty driving and engaging as you reach the top of the tower. There are also audio cues that come from traps and such, so I’m glad the music is decent so that everything can balance together nicely (though you can mute one or the other if you so choose). This kind of style and design does make for an overall good experience on the Switch, and it’s attractive enough in presentation and, again, the great name. 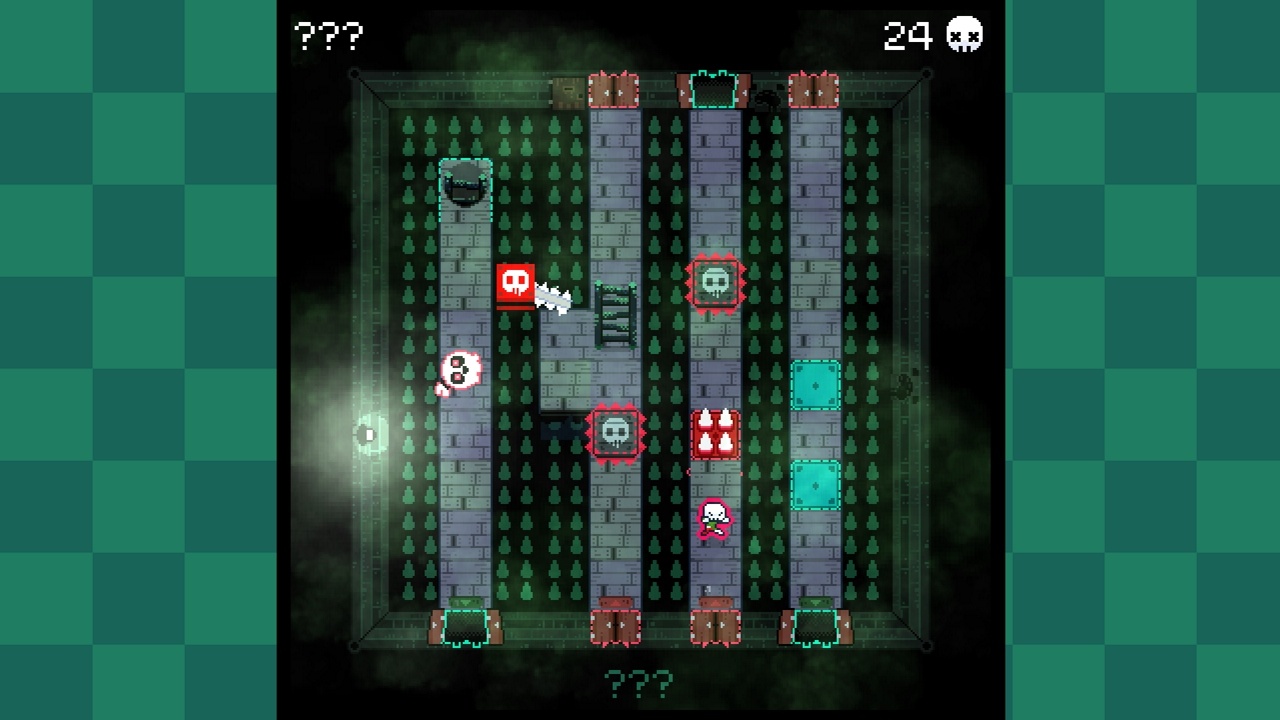 The flaw comes from the core element of the game. If you’re determined, you can play, from beginning to end, in under ten minutes. And I don’t even mean flawlessly, I mean you can die several times, including at the boss, and still be done before Weekend Update finishes. As a result, you need to look at this more of a party game than a solo expedition unless you sincerely enjoy procedurally generated hell rooms. The versus mode of the game is clever enough (be the first to reach the center and detonate the room), but, again, you don’t interact with your fellow skeletons. It just feels like multiple ghost modes active at once. And if you’re really masochistic, you can do endless mode and get a feel for how much the game can throw at you, but, uh, it’s endless. So good luck with that if it’s sincerely your cup of tea.

You Died but a Necromancer Revived You has a lot going for it. Good aesthetics, tight controls, decent amount of play and a tenuous balance of humor and difficulty. I’m hesitant to say it’s worth the full nine dollars, but, if you enjoy punishment puzzlers and want to have a good game to drag your friends into challenging, this is more enjoyable than some I’ve come across. Give it a try, or wait for a sale, but don’t expect the game to magically bring interest back to life once you’ve beaten it. When you’re dead, you’re dead.

You Died but a Necromancer revived you Review

A great title on top of a tight and polished insta-death puzzler, the only thing that keeps this game from immortality is a lack of solo replay value.