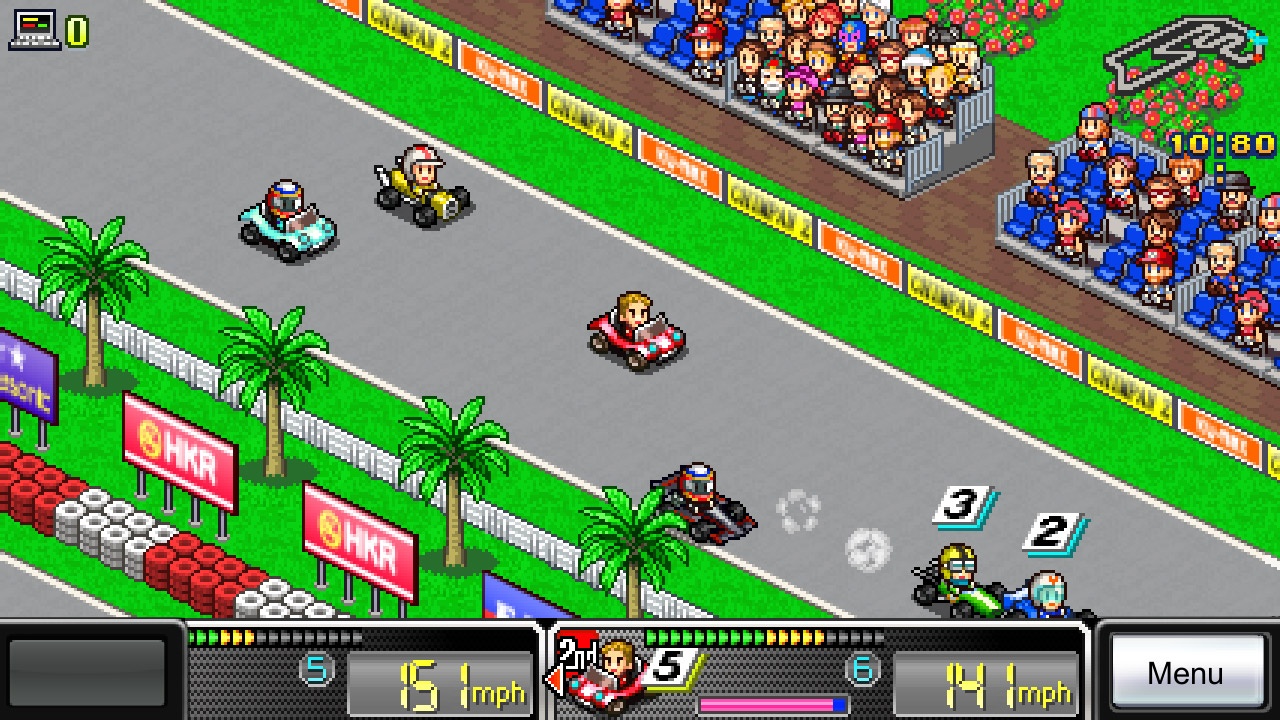 It’s no secret that when it comes to games developed by Kairosoft, they’re all instantly recognisable and contain a certain charm and level of playability that makes them easily accessible and ideal for all age groups. You can always guarantee that their titles are a safe bet with their cute and colourful presentations but overall, also know you’re getting good value with their abundance of game play. Whatever the game, all of the above apply and Grand Prix Story is no different, propelling its simulated subject matter into pole position as it races a release onto the Nintendo Switch.

If you’ve played other Kairosoft titles in the past, then you’ll be instantly familiar with the look, layout and style of this particular game; even more so if you’ve also played Pocket League Manager as its general premise and menu selection remains largely the same; albeit with a few more elements thrown in for good measure. Grand Prix Story revolves around the running of your own motorsport team and not just the Formula One style that you might expect from the title. From the functionality of the garage, to picking your drivers, mechanics and cars, you take overall control of your team from its lowly beginnings to embark on a journey that makes you a world championship organisation.

To add a touch of personalisation, you pick your team’s name and colour of your cars, before setting the development of your first car. For the first few races, you’ll struggle for pole position. However, as you begin to raise funds through races and sponsorship deals, you can begin to develop a variety of areas within your team. These can range from vehicles, parts, driver training and mechanic skills and knowledge. The more you invest, the bigger the rewards and it won’t be long before you start posing a serious challenge during the myriad of races that become available to you. 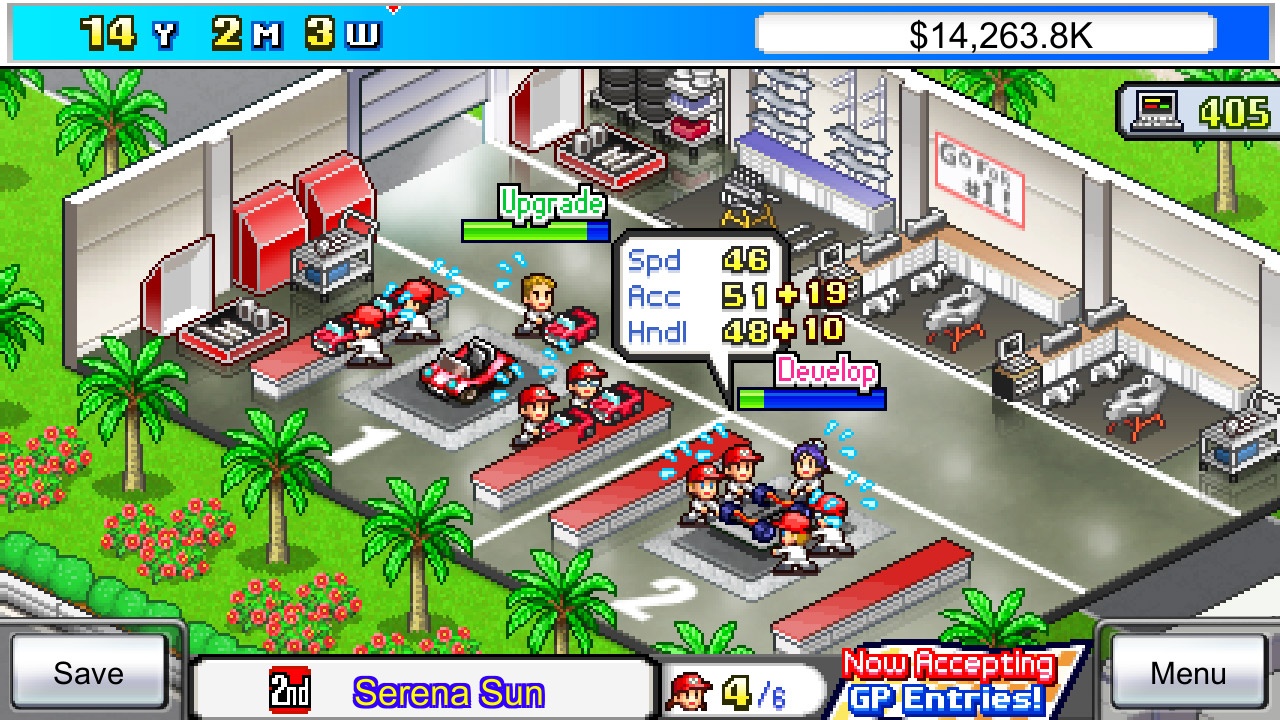 There are a lot of options, or elements that need to be tended to, but due to the presentation and accessibility of the game, never feels overwhelming; although when compared to Pocket league Story, there are more functions and an extra layer of slightly complicated tasks that need to fulfilled. Whereby Pocket League was more team focused, Grand Prix covers a more individual feel with the functions of development. However, as you begin to learn all of the menus and the various elements that comprise them, you’ll soon begin developing a garage and staff roster with relative ease.

The game contains the same simple, addictive formula of the more you invest and develop, the more options that become available to you. It produces an alluring premise that simply keeps you playing as you begin to see the fruits of your labour develop before your very eyes. The races themselves too, are never complicated in their execution, or really ask anything more from you. In fact, in terms of participating in the actual events on which the games are based around, there are more functions within Pocket League’s style rather than here. There’s no pit-stops to worry about or tyre wearing; although you do get the occasional break down, but these are very few and far between and largely depend on your ability to keep the cars in pristine condition and your drivers in top shape before each race day. 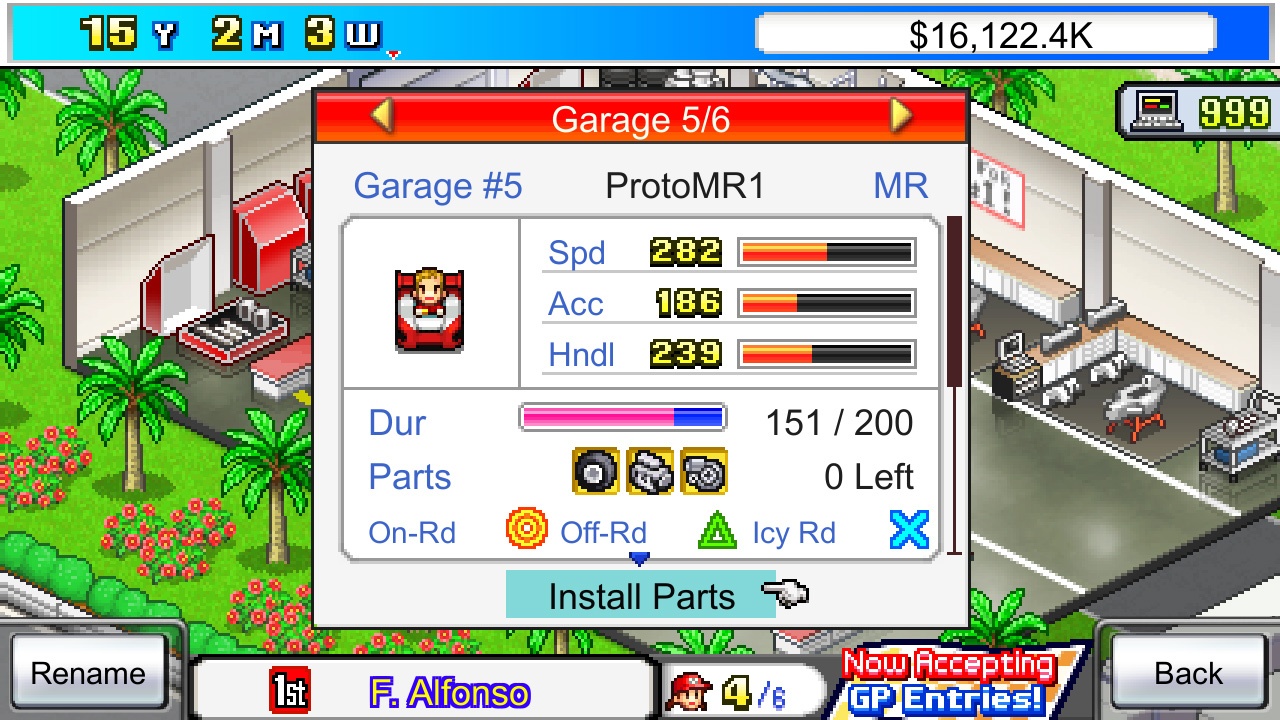 In fact, being a game that revolves around the sport of motor racing, the races themselves aren’t particularly exciting affairs, as you simply spectate with the hope that your training and research produces enough results to reach a podium finish. Fail to do so and its back to the garage to try and get more from your team, drivers and cars. Despite containing a satisfying element in watching your team develop, Grand Prix doesn’t hold the same level of satisfaction of its closest competitor, Pocket League. However, that doesn’t make it any less playable and in terms of replicating a arcade-style of motorsport management, actually does a stellar job; especially when you begin to develop formula one style racing cars and engines to match.

One thing you can do here, is develop your garage to house more than one car; allowing you to expand your team to a number of drivers and mechanic, as well as enter them into a series of races. As your team grows, so do your finances, allowing you to invest more and open up further elements of the game. However, you can also choose to scrap cars that are no longer needed. These in turn, reward you with tech points with which to develop faster and more manoeuvrable models. At times, your driver may possess an aura, which effectively boosts their capabilities on and off the track. Utilise them when your developing and you can produce vehicles or parts that far excel their base stats. Save it for the race track though and you’ll gain a temporary boost to your speed; especially useful when you need that extra oomph to pip your rival to the post.

Overall, Grand Prix Story does a solid job of replicating the functions of running and developing your very own motorsport team; albeit in a very simplistic way and arcade style. If your looking for a sim that contains a plethora of technicalities, then you’re better off looking elsewhere. However, what this game does is presents a family-friendly setting that players of all ages should find some enjoyment with. If you’ve played Pocket League Story and are looking for more of the same, then this game does present in a very similar style, although for me personally, I found the soccer sim a more immersive experience. As with any Kairosoft game, this is a charming title with cutesy presentations and accessible gameplay that adds to produce an addictive style and, ultimately, is a worthy addition to anyone’s switch library.

Grand Prix Story may not quite reach the pole position of other Kairosoft titles, but is still an entertaining and addictive game nonetheless.