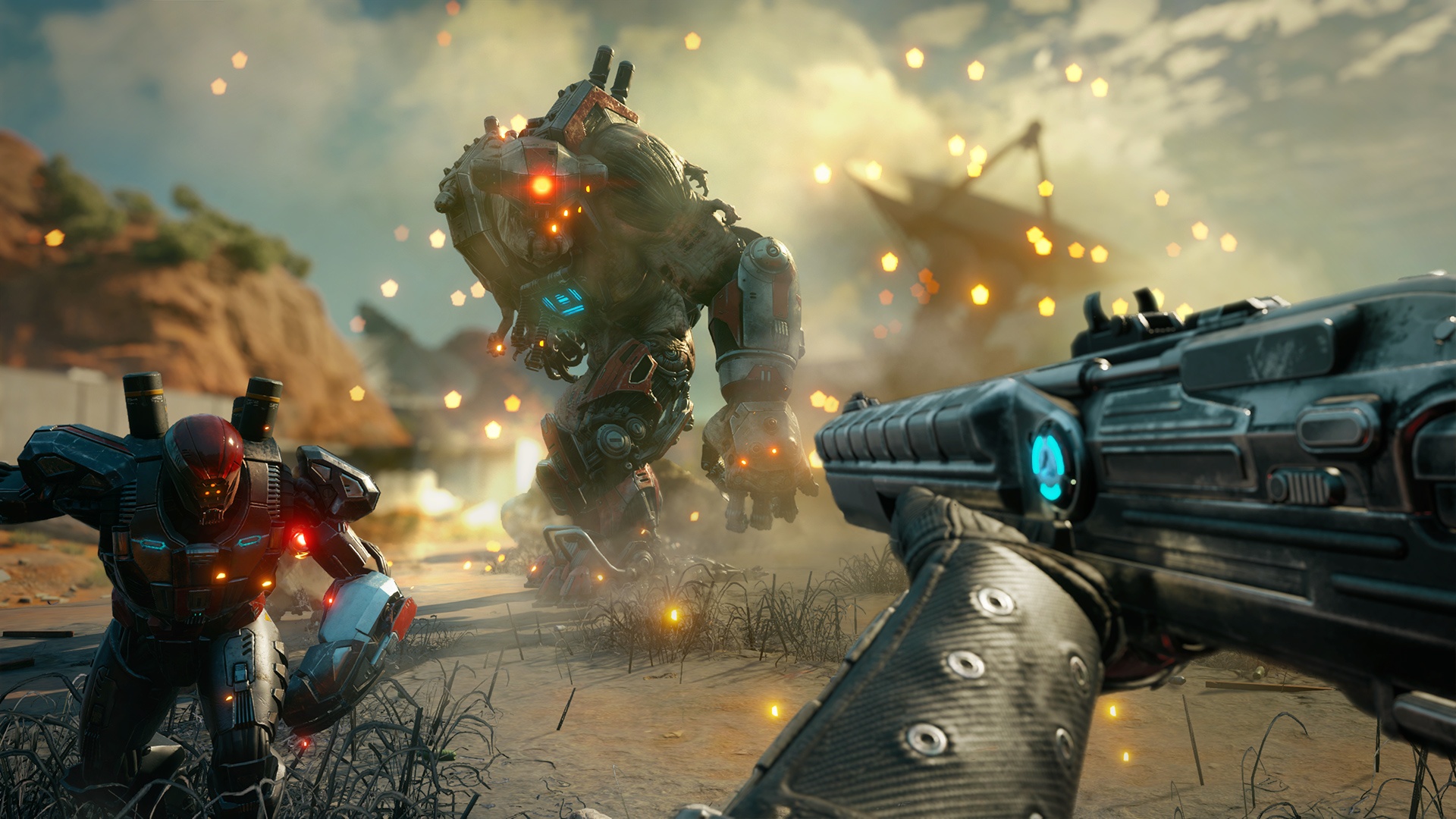 When the original Rage was released to mixed reviews in 2011, I landed heavily on the positive side of the spectrum. At the time, the game was unique in a world where post-apocalyptic shooters hadn’t grown stale and the gaming landscape hadn’t fallen victim to repetition and lack of innovation. I was enthralled with its visceral combat, engaging vehicle mechanics, and unconventional world. Rage 2’s announcement reminded me of that thoroughly exciting romp I had through the original, but my wait for the game has left me with a mixed bag and a bitter aftertaste.

Players won’t need to have played the original game to dive into Rage 2. The story isn’t treated as much more than merely something to motivate you to go bonkers on thousands of enemies, so if you’re looking for a narrative-focused game, you won’t find much here beyond the typical “big bad guy wants to destroy stuff” trope. The only real choice you’re given is the option to pick a male or female character, but they’re both generic action hero types and the choice is inconsequential to the plot. Voice acting is mostly solid around the board, and I really enjoyed some of the characters I met along the way, but I would have liked to have felt more invested in the game’s lore. Exposition is mostly doled out through obligatory data pads and the like, so there’s little to latch on to beyond the surface. 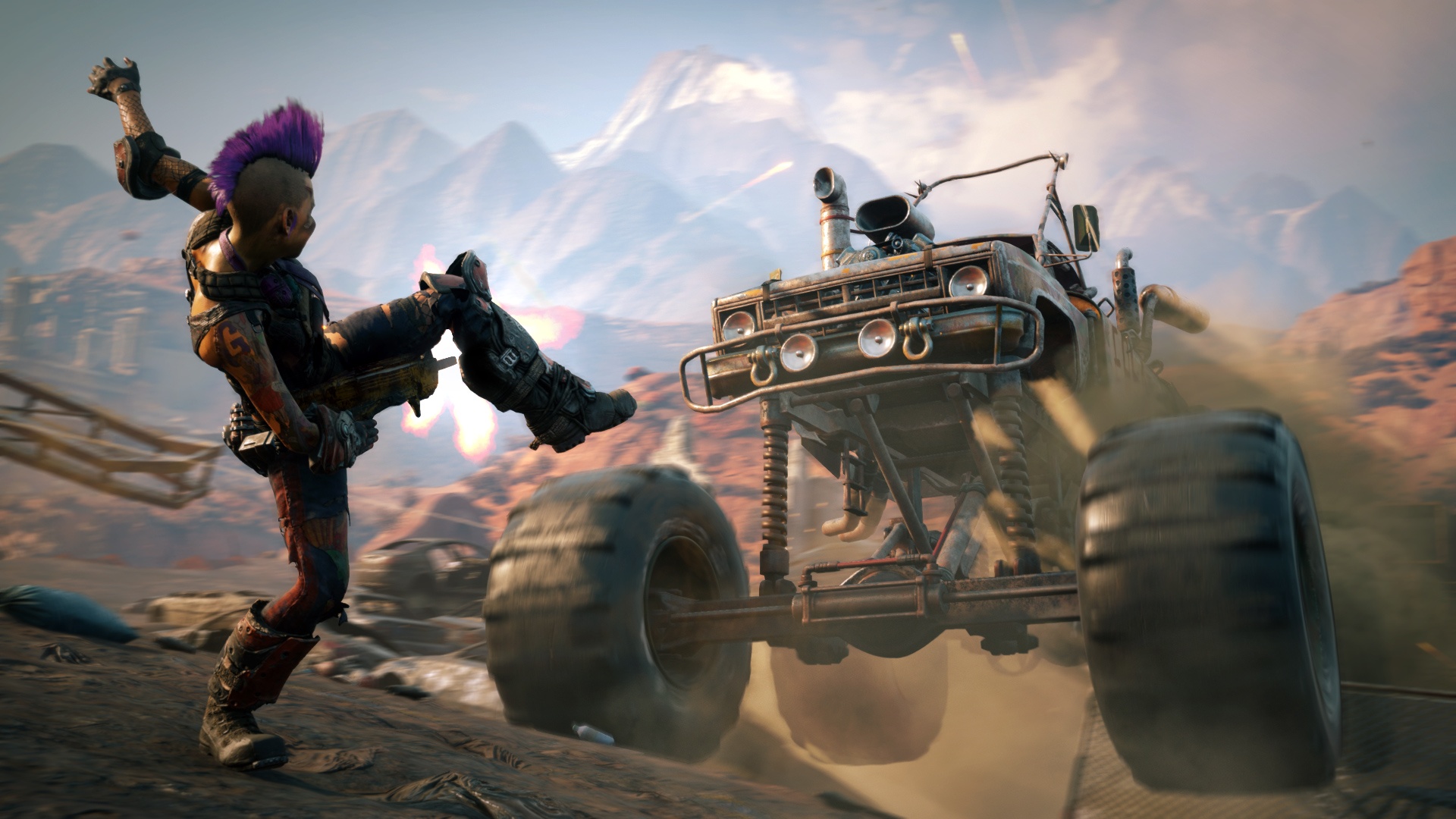 Rage 2’s move to fully open world exploration comes at a price and feels at war with its frantic shooting gameplay. Whereas the original gave players open levels just large enough to explore and discover something consistently while mowing through mutants, this sequel’s open space is barren and lifeless with muddy graphics and a dull aesthetic. Massive swathes of land are void of anything to find or do, and the smattering of your typical open world bandit camps and checklist objectives are fairly tame and repetitive affairs. There are only a handful of objective types throughout this 15-20 hour experience – go here, protect this, clear that, find those. You’ve seen this all before, but Rage 2 has a real “us too” complex and really needs you to know it.

Each area has a specific number of boxes of money and material to find in order to check it off as “completed”. Since the money and materials are so vital and otherwise not very obtainable otherwise, players are forced to spend time repetitively tracking them down at every stop they make. Sometimes they’re well-hidden and actually manage to be fun to round up, but it usually just feels like padding because, well, it is. By the end of the game, you’ll have spent at least a quarter of gameplay time looking for these pink boxes – time that could’ve been better spent involved in far more engaging gameplay. It’s one of the biggest examples that Rage 2 is a small game in a huge open-world package, and we’re left with too little to do and too much downtime.

Thankfully, the constant thrill of upgrading various tools, guns, and perks can make grinding through some of the more mundane aspects of the game worth it. These options are all spread across a gamut of initially confusing different systems, each with its own type of currency, materials, and type of progression. Once you understand the way each upgrade system functions, however, it becomes consistently rewarding to seek out and find the various requirements to keep the improvements pouring in. Upgrading a shotgun to have a larger magazine might sound pretty basic, but move over to another perk tree and you may find that you can learn an ability that lets you hover in midair. Tab over again for a group of perks that are unlocked as you gain more approval of a few main NPCs you meet along the way, granting you access to cool abilities like using your melee attack to hit enemy grenades back to them or sliding into enemies to send them up in the air. 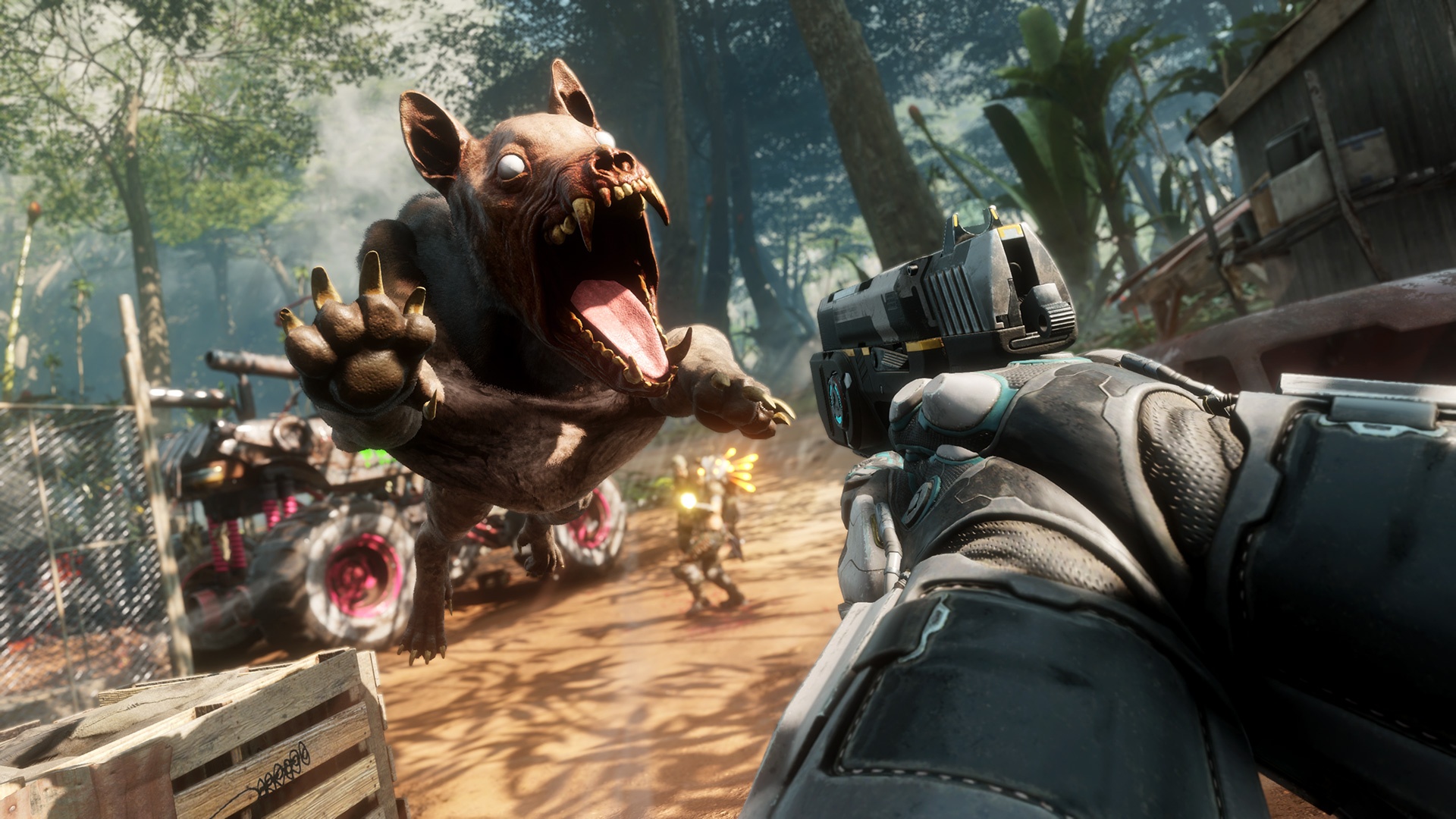 These endlessly entertaining combat options keep Rage 2 enjoyable even when it’s a victim of its own reliance on genre norms. I may have been bored by the time I reached a new objective in the game’s unnecessary open world, but I always got excited by seeing a group of enemies to use my skills on. Rage 2 is simply at its best when it’s giving you violent creativity in frenetic fights against waves of mutants who want nothing more than to see you dead, and its suite of fun combat options keep things from feeling too rinse-and-repeat. Using all of your skills together to create a cacophony of destruction is a visual and tangible treat offering an exciting charge of dopamine rarely found in a first-person shooter. Epic boss battles round out the enemy variety and can be a true sight to behold, and some of them even manage to be quite a challenge. Overcoming hulking beasts of this size feels empowering and fresh in a genre that has moved more and more away from stylized fantasy in favor of a more realistic designs. This is much more DOOM and much less Fallout.

Sadly, its driving mechanics fare far worse, and that’s a shame since you spend some much time navigating the world in vehicles. They don’t control very well and offer muted, unexciting combat encounters and races that feel obligatory rather than natural this time around. There are plenty of upgrades available meant to improve the driving experience, but I had long since lost interest by the time I unlocked a few of them. There’s a difference between offering upgrades as a way to improve an already fun time and making something completely unenjoyable until you grind out said upgrades.

Rage 2 has taken a few steps forward, and in some ways it has brought the series into modern shooter territory, but those steps forward seem to have ultimately led it off the side of a cliff. The game’s fundamental mechanics mostly function fine, and there’s fun to be had if you’re just looking to point and shoot at things, but there’s a significant amount of potential wasted in the game’s obsession with being like every other open world game instead of honing in and focusing on its unique voice.

Rage 2 has taken a few steps forward, and in some ways it has brought the series into modern shooter territory, but those steps forward seem to have ultimately led it off the side of a cliff.