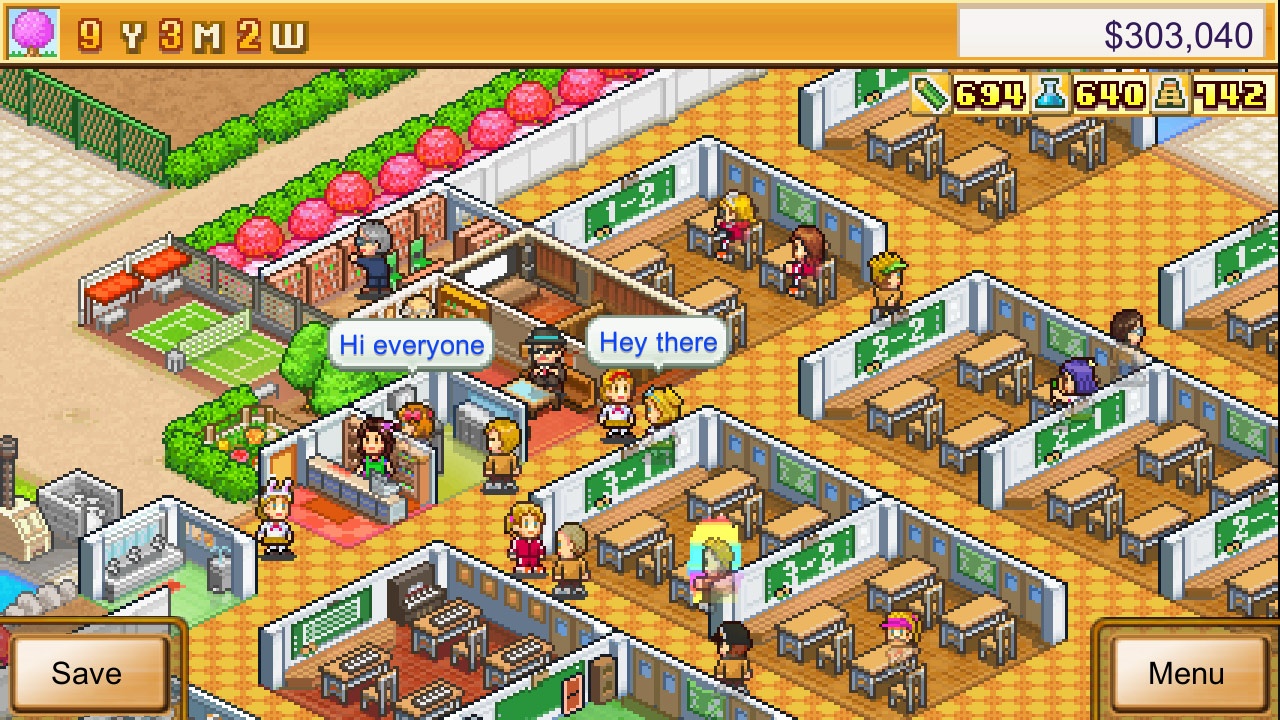 Kairosift’s game Pocket Academy in its own way is unique compared to their last two games I have previously reviewed. Those being Ninja Village, and Mega Mall Story. However, its missing certain components from these games that made them fun and enjoyable to play.

Pocket Academy puts the player in charge of running an academy with the job of not necessarily of being the biggest school out there, but instead to display that your learning system works and that you have the best school spirit. I mean, sure, you can build things like libraries and music rooms and class pets, but in the end they all affect how wel youl, and your students learn in a subject. These subjects being Maths, English, Spanish, Science and History. 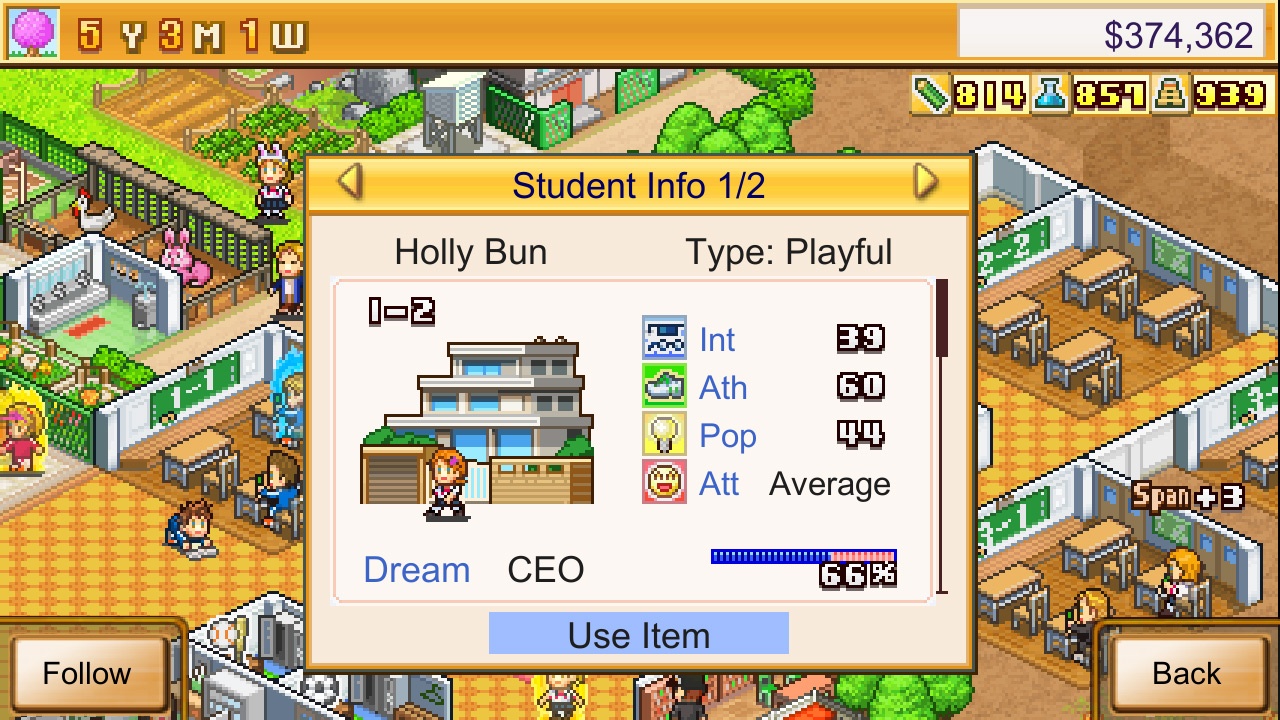 Unlike other Kariosoft games, Pocket Academy just throws you into the game without pointing you in the right direction, without explaining any of the game’s mechanics and dynamics. If for someone who has played their past games like me is struggling in the beginning to get a grasp on what to do, imagine how someone would feel if Pocket Academy was the first game they have played. Once the game starts, a brief welcome introduction is played and after that your off on your own. I really spent a huge amount of my time watching students go to class and teachers just walking around the school wondering if the game had actually started yet. There really isn’t a indication if I was even doing anything right either.

The one major thing that Pocket Academy doesn’t excel at, is the tycoon aspect of a simulation game. With the game revolving around mostly how the students are performing in class, there is less attention how money is earned in the game. At times when I had first began playing, I found myself going bankrupt within a couple minutes due to maintenance cost of the school and paying the faculty and staff. Pocket Academy requires planning and strategy in order to keep your school up and running. With this being said, this game requires a lot of time and patience as you will find yourself constantly waiting until you have enough money to do anything, from building a new facility or hiring a faculty. What I also did not like was the game didn’t really give a good description on what each facility did towards your students learning. I often at times would be blindly placing buildings down not knowing what they would do. 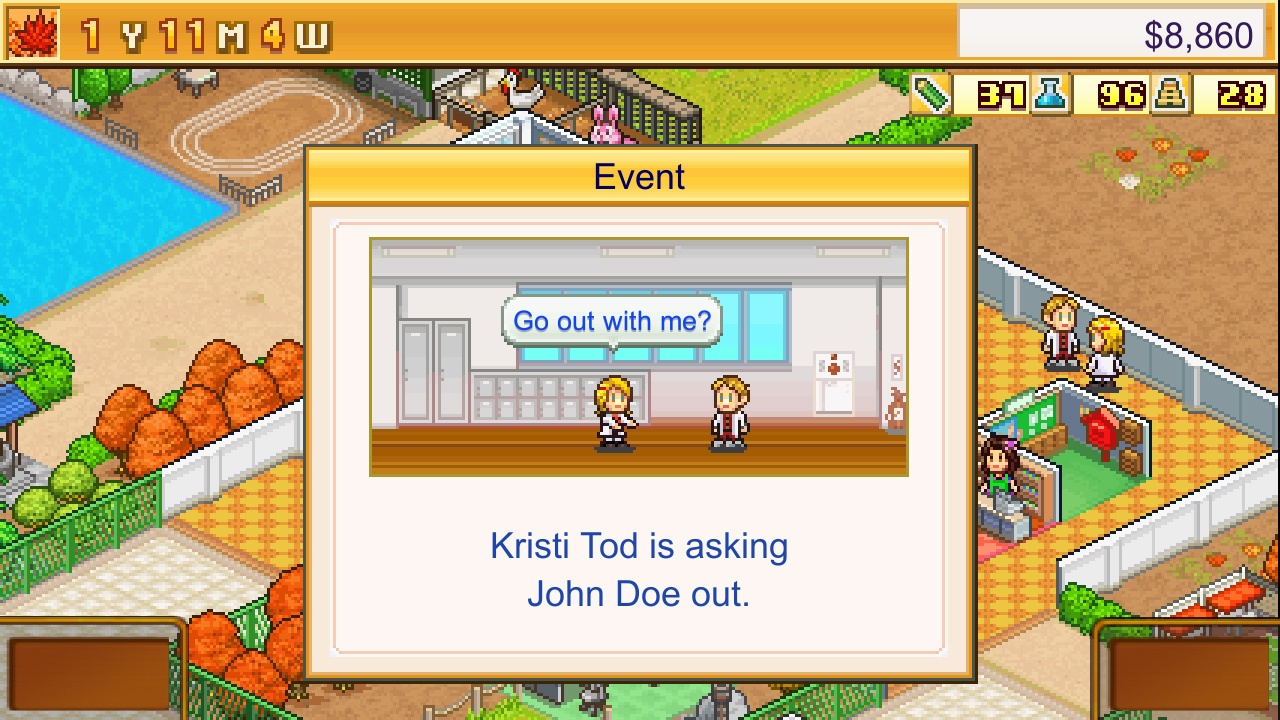 The one thing that Pocket Academy does that’s different from the rest of Kariosoft’s games is that you feel more invested in the characters, since this game focuses way more less than being a money tycoon. I often at times would find myself spending my time trying to help a specific student improve in a course they were struggling in the most. To see them succeed and improve felt satisfactory and put a smile onto my face. In the game you are able to send students to various events to earn some quick cash and they are able to join clubs and have boyfriends and girlfriends, which all brings popularity towards your school.

Pocket Academy is overall is a interesting game that changes game mechanics compared to other Kariosoft games. However this game just felt over the top to me compared to other simulation games. With the lack of instruction and tutorial, the game overall seemed confusing and difficult to me. Considering all the other Kariosoft games that are out there, you are better off playing them than Pocket Academy which, in my opinion wasn’t one of their best works.

Pocket Academy is overall is a interesting game that changes game mechanics compared to other Kariosoft games.