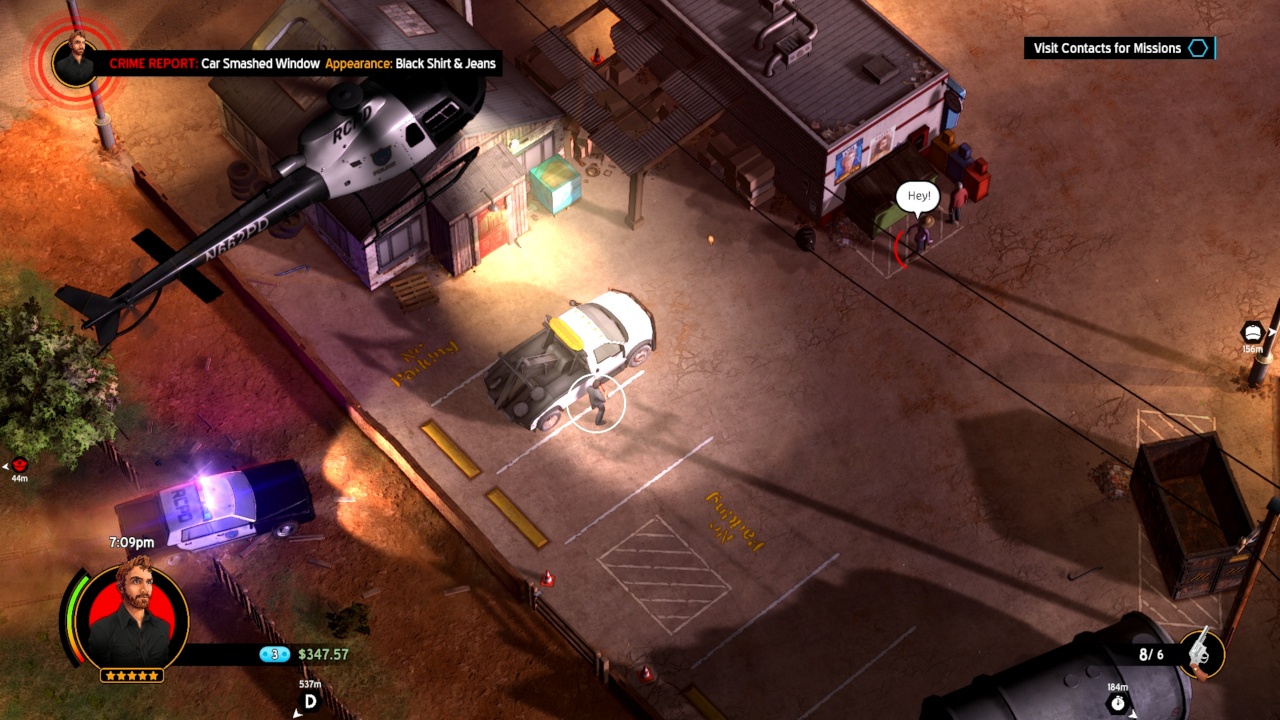 As seventies UK rock band The Clash sang, “I fought the law and the law won”, it’s never an easy thing to avoid the clutches of the long arm of the law when you find yourself on the wrong side of it. However, it’s most certainly worth a try in the latest crime-busting title to escape a release onto the Nintendo Switch in American Fugitive.

Developed by Fallen Tree Games and published through Curve Digital, American Fugitive places you firmly within the shoes of William Riley, a man who is wrongly imprisoned for the murder of his father. Following an escape from jail, you are set free within the sand-boxed world of Redrock County, where you must interact with a number of characters who help you to find the person who was truly responsible for the death of your father and prove your innocence. Viewed from a top-down/isometric perspective, the backwater countrysides have been superbly presented, with some nice detailed environments and real-time physical attributes that presents a believable, living and breathing world to explore.

There’s plenty to do and interact with here, from stealing clothes off of washing lines in order to change your attire, a handy little function in more ways than one, to picking up handy items or food supplements and leaping over fences to hiding within the shrubbery. You can even acquire any of the vehicles that may be driving around or parked up for your convenience, producing a very Dukes of Hazard feel within the overall presentation of the gameplay and the world around you. In fact, the level of interaction within the environment is simply staggering, making the county of Redrock a very believable place in which to reside. 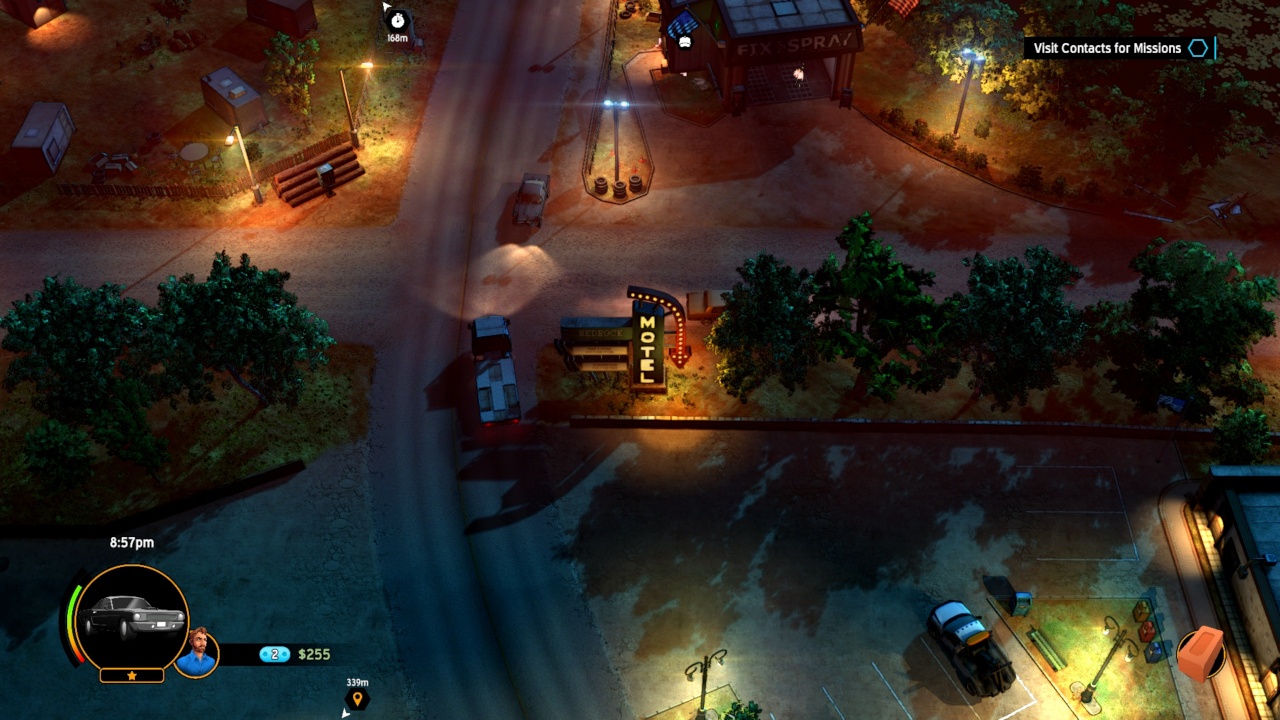 However, you’re simply not a tourist or here for sightseeing, as you have the police searching for you, as well as the task of finding who was responsible for framing you. This is achieved by, first of all, working with your brother-in-law and running a set of mission objectives that sees you firefighting amongst rival gangs, stealing cars and paperwork, breaking into properties and taking out targets of opportunity. As you progress further into the story, you also unlock a variety of further characters, activities and establishments that offer races for money, vehicle paint sprays and weapon dealers to name but a few. By completing tasks and races, as well as opening the world around you, you also accrue XP which allows you to level up and develop buffs and techniques, such as extra health or extra weapon damage, to help you on your quest.

There’s an abundance of different elements at work here, from the mechanics of driving vehicles to breaking and entering, down to the tension of police chases and escaping the law through hiding and changing your appearance. For instance, when it comes to entering buildings in order to rob them, you can look through the windows to ascertain if anyone is inside and if you have the required tool, if not, you can search for one nearby, you can smash or open the window and climb inside. The viewpoint then changes to a blueprint-style layout of the floor plan, where you can go from room-to-room and search the immediate area. You can even tie-up any inhabitants should any be inside and rob them.

All of its elements combine to produce an exhilarating and often tense affair. With no on-screen mini-map as such, searching the area around you or trying to escape from any police attention can be thrilling, as you hurtle blindly down dust-tracked roads or run across the countryside in search of a suitable hiding place or another way to avoid unwanted attention. You do have access to a world map on which you can place markers to reach specific destinations, but the thrill of the chase when you aren’t familiar with your surroundings can produce some very heart-pounding moments. It’s here where the game excels. However, there are other elements that produce a more lacklustre experience, bringing the game down to a more frustrating experience. 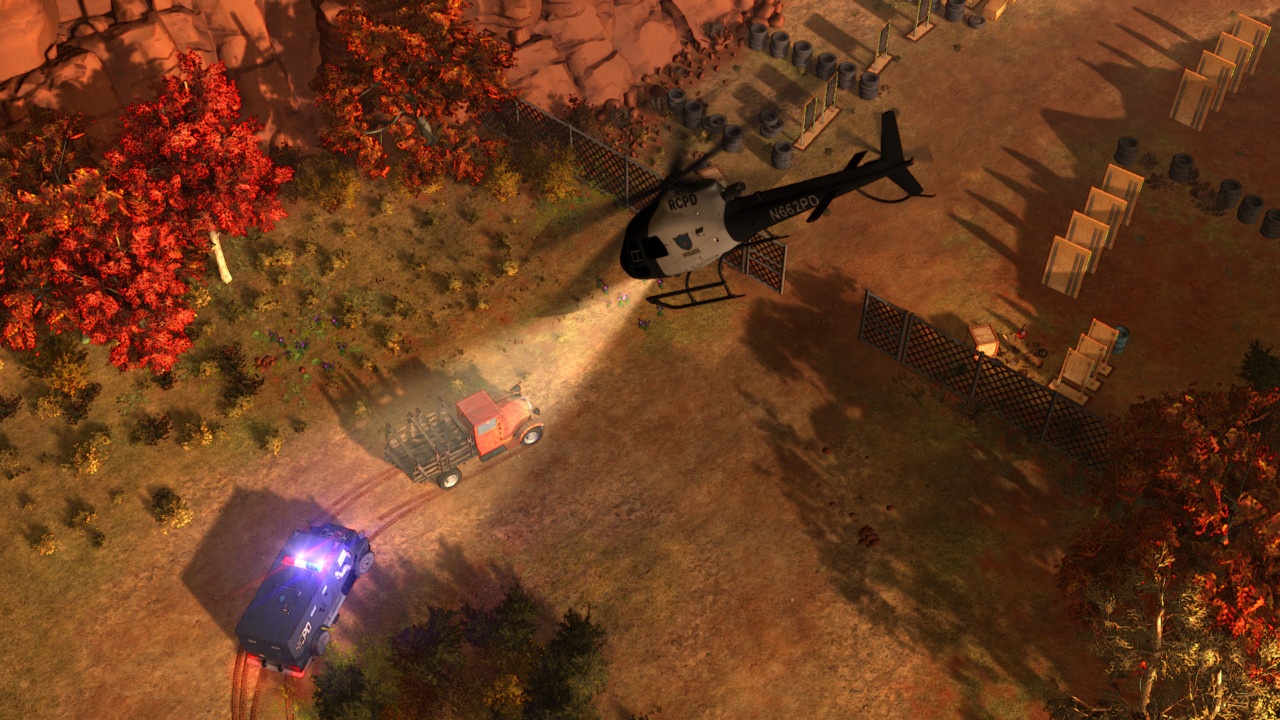 The most common of these comes in the structure of the mission types that are available for you. More often than not, you begin to run a series of errands that mimic others that have come before it, leading to some repetition in the gameplay or a series of uninteresting tasks. However, worst still are some of the mechanics in which these missions are executed. Gunplay is particularly hit-and-miss, utilising a twin-stick mechanic that falters in the accuracy of lining up your shots. Whatever your job, it all seems a little too easy to attract the attentions of the local sheriff, producing a very unrealistic feel to an otherwise realistic world. Although escaping any police interest can be thrilling, the way in which you can escape their pursuits can be a bit too simple at times, as sitting in a nearby bush out-of-sight, or changing your clothes immediately lowers your wanted level and the police call off any pursuit.

This is equally marred by a few technical issues too, such as a stuttering frame-rate when the going gets tough and more worryingly, I found myself on more than one occasion where my intended target had run beyond the scenery and out of the playing area of the map, forcing me to restart the game and pray to god that the same thing didn’t happen again. A couple of static crashes also produced some problematic moments that simply hampers the flow of the game and ultimately, the fun that can be had with it. There are also elements that fool you into thinking that there are deeper mechanics at play here, such as narrative choices in deciding your next step. However, whatever response you choose to pick, none of them have any particular bearing on the story or alter its path in any way, as whatever choice you choose, the same linearity of story plays out.

Overall, American Fugitive does offer a lot of fun in some of what it presents, but in other areas, it simply fails. In terms of presentation and the thrill of the chase, the game excels, but when it comes to mission structures and some of its overall executions, it merely begins to feel broken. With luck, a few patches can smooth the ride and produce an overall experience that matches its presentation. It has to be said that the world around you is perfectly recreated and the physics-based interaction is sublimely done. If you can see past its downfalls, then there’s a really great game here, but too many frustrating moments will eventually catch up with you, producing a game that could have been, rather than a polished experience that needs to be played. It’s not a bad game, in fact it is rather good, just too many broken elements bring it down a bit, which in my opinion, is simply criminal.

American Fugitive places you firmly within the shoes of William Riley, a man who is wrongly imprisoned for the murder of his father.