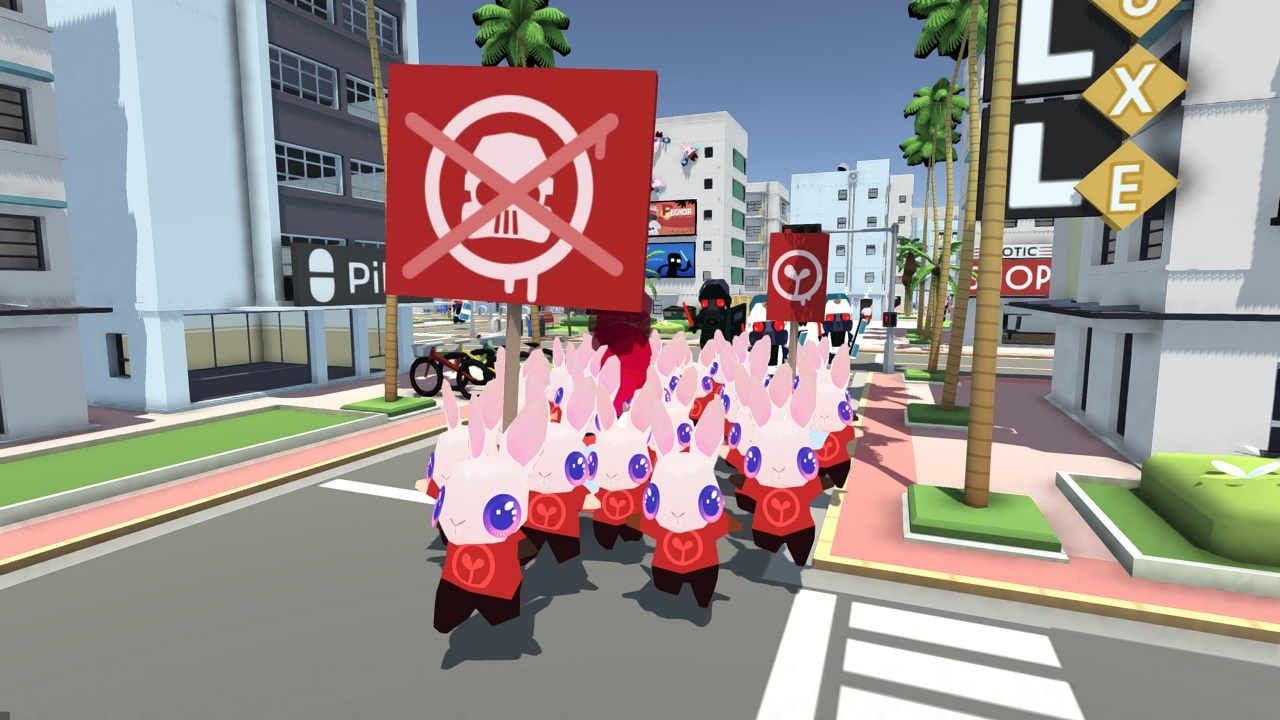 There are a lot of voices that scream about the coming rebellion. Saying that it will rise in one country or another, and that the moment of catalyst may not be easily identifiable, or televised, but will absolutely lead to a change in a country’s government, if not the world’s. The younger generation froths at the mouth with disdain for how the older ones handle the reigns of the future, and we wonder, when will there come the tipping point? This may have been the thoughts running through the head of Anarteam as they developed their riot crowd simulator, Anarcute, or they may have simply thought of a funny idea, a cute execution, and really made the most out of it. I’m not terrifically sure, but one thing is certain: this game is adorable.

Anarcute’s world is currently overrun by a baddie organization called the Brainwash Patrol. Setting up in major cities the world over, these masked menaces are oppressing the freedom and happy nature of all, and making the world a significantly less awesome place. A single voice needs to be the first to speak in order to get the changes to occur, and it just so happens that you, dear player, are the match that starts the fire. You find comrades not only in your streets, but in different cities, different countries, and you know what must be done. Joining together all walks of life, watch alligators, rabbits, octopuses, shiba dogs and more form a truly ruly mob and take back the world one spot at a time!

The first time playing Anarcute might be confusing, but let me assure you it plays well enough once you get a hang of things. You usually start each level as just one or two characters, moving together in tandem as you patrol the streets. By and by, you’ll discover other people who want to join your cause, either just milling about or already captured by the Brainwash Patrol and waiting for freedom. Each level has some variant of objective, be it to destroy a Brainwash Patrol base, shutdown multiple antennas broadcasting brainwashing signals, or just blow up the Eiffel Tower (which isn’t really the Eiffel Tower, but, you know, sure looks like it). Naturally, your mob isn’t welcomed too happily by the police, who will attempt to beat you up and disband your mob. If someone in your group takes a hit or two, they’re down and you’re out a party member. Which is a problem, because you WANT a big mob. A bigger crowd means more powers, and things get positively hilarious when your protest blob hits numbers like 60 or more. 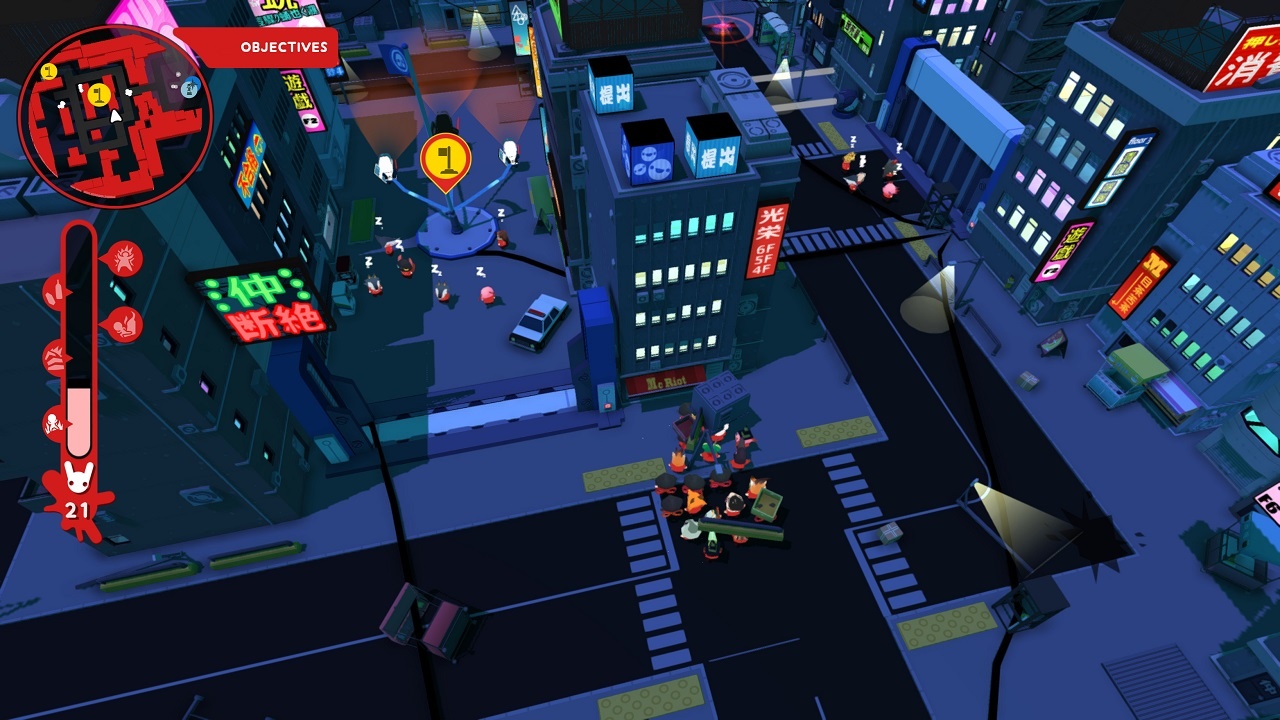 Gameplay is pretty straightforward. The group of Anarcute can do a general “beating” on baddies by mashing the A button, and things get more complex the bigger you are. You can hurl random objects that you pickup, such as trees, benches and bins, and there’s a separate button for throwing cars, which are dead useful for taking down some walls or dealing with larger, more brutish officers. You get coins for successfully completing the levels, which are used in a vending machine to add more perks for your mob. For example, you can normally do a stomp at 20 people, but what if you could do a FIRE stomp and incur some extra damage? And a sixty creature mob is great, but what if it just got even bigger because you were SO CUTE the cops had to drop their batons and join your gang? That’s not to mention things like unlimited objects to throw, knocking over buildings and, with a little coin upgrade, PICKING UP BUILDINGS to hurl. At some point, the game really teters on the precipice of “cute” and “scary,” but never falls overboard because I then find a new animal to unlock and I’m happy again.

Playing through Anarcute might not take a ton of time, but getting things right and doing it well takes precision, accuracy and patience. There are a finite number of would-be protesters in each level, and, once they join you, that’s their one chance to live and increase your numbers. If you lose them to police, land mines, lasers or otherwise, you can’t get them back without restarting the stage, and you might paint yourself into a corner as a result. A couple of times, I realized that I was floating around 28 protesters, and I needed 30 to knock over buildings, and I simply couldn’t find anyone else that was tied down. It was still possible to finish the level, but I felt like I was doing a subpar job as a result. Additionally, since you control the mob and not a single character, it can sometimes be hard to make sure you’re targeting what you want to at the proper time. Certain officers can do a massive stomp and incapacitate multiple protesters at once, but, if there’s another officer nearby, there’s a chance you might target the non-threatening one instead, wasting your time before getting wasted. And if the dashing officer has his sights on you, it’s easy for one of your mob to get wasted because you couldn’t dash all fifty critters out of the way in time. 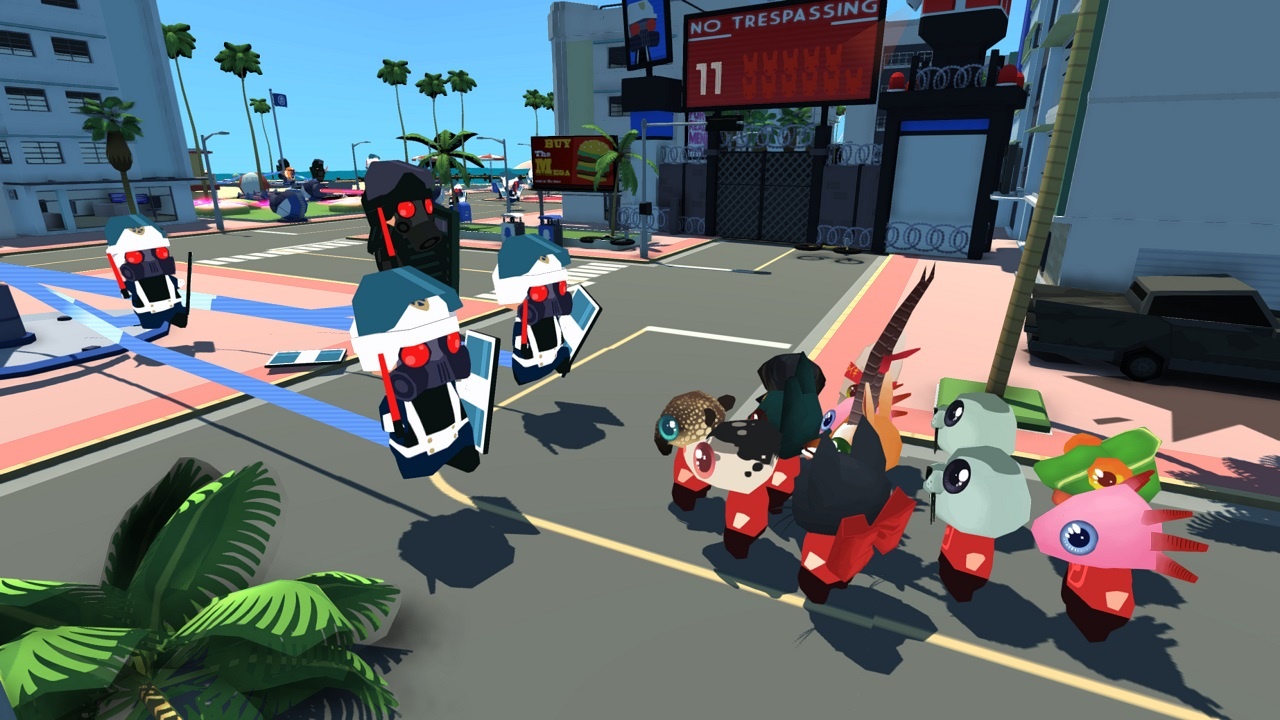 Yet the game still brings you along, merrily and happily, for a truly cute and bizarre experience. Anarcute isn’t just all about smashing things, it’s sometimes espionage missions, sometimes tactical boss battles, and, yea, sometimes just mayhem in chibi form. All the different animal mascots that you can get have massive heads and eyes on tiny bodies, making even traditionally non-cute animals like crows and fish turn into something endearing (the spider is still not endearing). You end up collecting so many that you can choose what you want in your crew so that you have mainstay favorites always on the front lines, and branching missions give you the option to participate in extra-anarchy activities, or just stick to the plot and jump from Tokyo to Paris to Miami and beyond. It’s visually pleasing, and the music is catchy, upbeat, very happy-go-lucky, and manages to put a fun spin on everything that’s happening. Anarcute really does the job in making something that could have easily been violent, bloody or super political and, instead, delivers a concise, enjoyable package that sits there, pleasantly patient, for you to find all the friends, unlock all the different power ups and really just have a ton of fun rioting.

Playing Anarcute is akin to having a great save file of Grand Theft Auto. You got to where you are because you put in the work, and now you’re awesome, and you have some choices. You can go back and see the ending of the game time after time, or you can revisit your old haunts and have chaotic fun. When you have such a magnificent mob of critters with these borderline obscene abilities, it’s sometimes feels better to go back and demolish every single thing that you can find. After all, what better way is there to inspire a government upheaval than to create an artificial cataclysm? While the camera might sometimes be a bit touchy, everything in this Switch port is enjoyable and worth bringing on the go, and I’m happy to see the cutest little uprising take place right on the Nintendo screen.

Rabbits, dogs, cats &amp; even turtles come together to tear down the establishment in Anarcute, a perfectly accurate simulation of if anime animals went full mob.