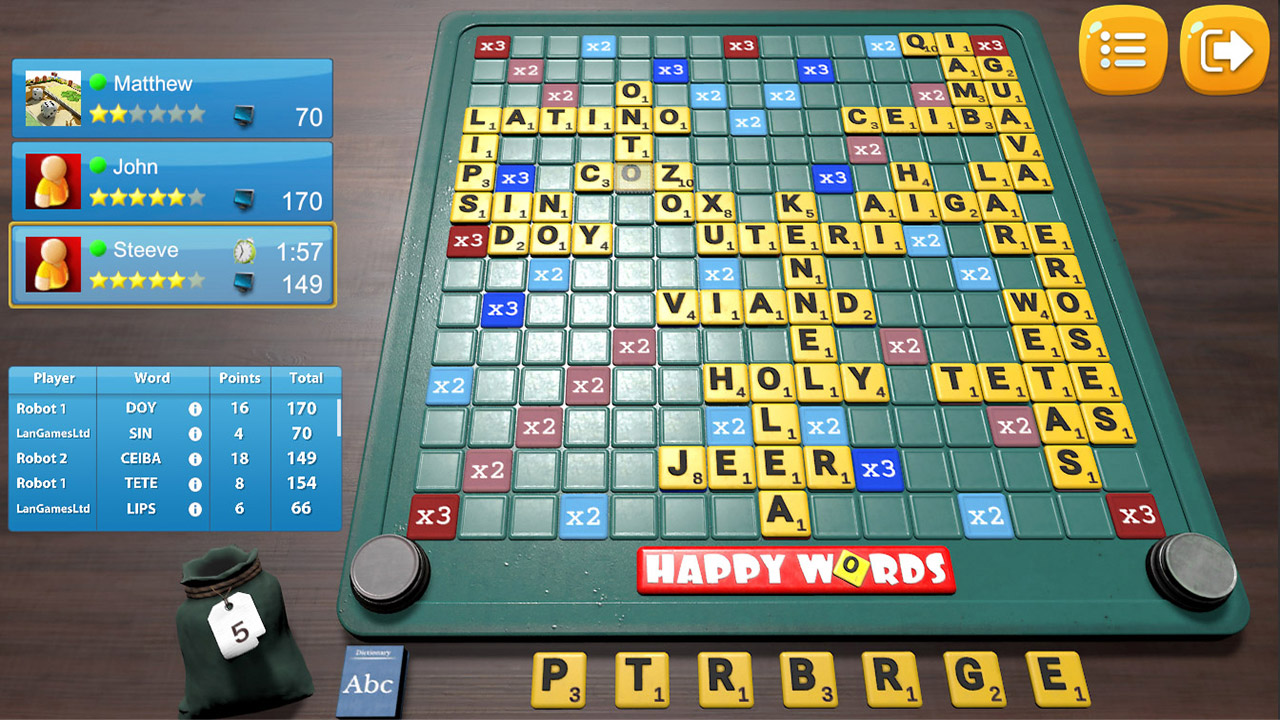 The classic board game, Scrabble has enchanted worldwide audiences for over eighty years. Its formula of creating words from a set number of letters, plus adjoining them to other words that have been created on the board has to be one the simplest games ever devised, yet also one of the most fiendishly difficult and addictive board games to date. Its premise has seen a transition to a digital format too over recent years, as well as spawn many imitators and variations on its themes, the latest of which comes in the form Happy Words as it spells a release onto the Nintendo Switch.

Developed and published by LAN – GAMES EOOD, Happy Words follows along the same successful formula of Scrabble, but also adds a few variations of its own, as well as an abundance of customisation options and play modes to create a more personal experience. The game caters for one to four players, either as solo play against AI bots, online in real-time multiplayer and local couch play with family and friends. It also contains a wealth of options that allows you to adjust certain rulings, such as the time taken to be allowed to think of a word, depicting the amount of letters that are available, either within the bags that hold the letter tiles or the amount of letters that each player can possess at one time and dictionary or language options. You can even customise other features such as board or tile colours and camera angles or views.

In terms of how the game plays, it follows a very similar structure to the classic game of Scrabble. The objective here is to chain together a series of words from a limited selection of letters that run across the board in a similar vein to a crossword puzzle. From a selection of tiles that each player possesses, you must try and construct a word, however, each word you create must adjoin to an existing word on the board and so on and so forth. Each letter tile you use also comes with a numerical value that denotes the score associated with that letter; the longer or more complex the word, the higher the score you can achieve by adding each of the number values within each tile. 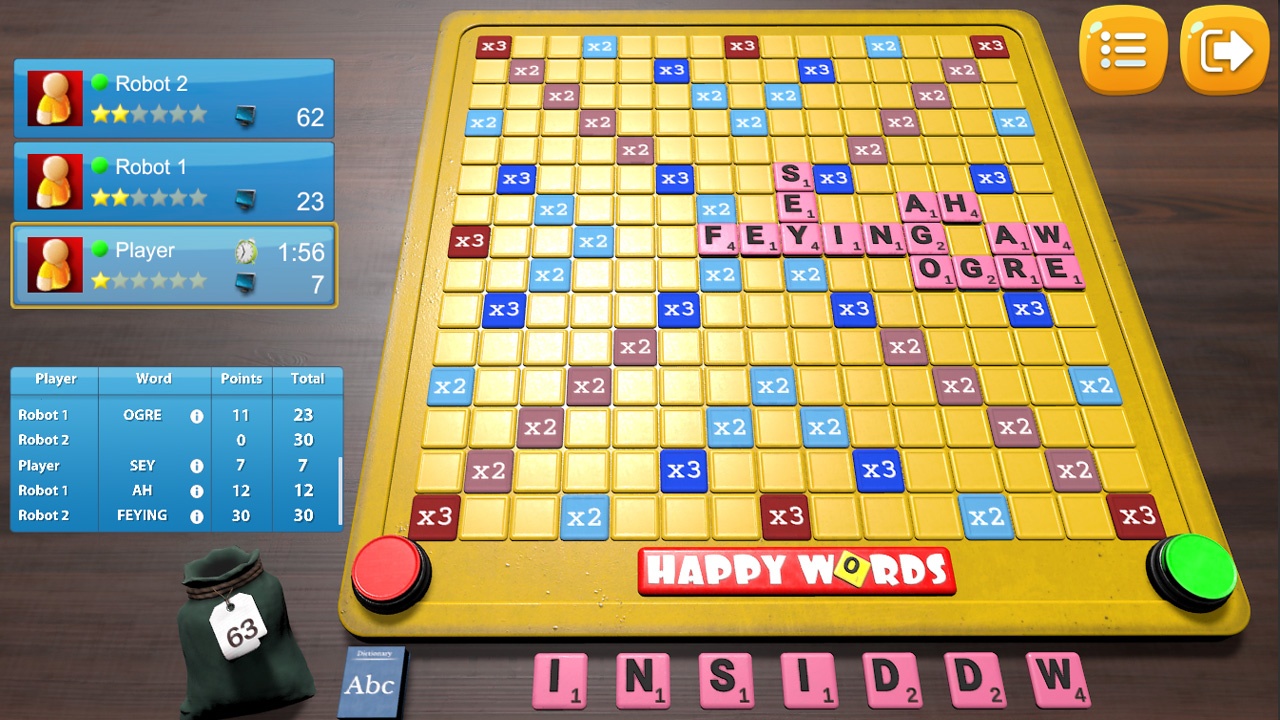 Certain areas within the game board contain a number of bonuses such as double or triple letter values; making a one point tile double or triple in value. Other areas can produce a bonus that even double or triple the score of your overall word, creating a battle for supremacy upon the board as you each try and create the highest word that can land on one the bigger bonuses. The game ends when all of the tiles have been used or whenever each player cannot create any more words. The person who has attained the highest score is then the overall winner. It’s a very simple, yet very effective premise that is simple to learn, yet can be difficult to master. It largely depends on the skill level of your own vocabulary and the ability to spot effective areas on the board upon where to build your words.

To help you with the creation of words, Happy Words also incorporates a handy dictionary option that allows you to check if any words you may have thought of are acceptable within the game; although some limitations do apply, such as words that begin with a capital letter, names or abbreviations being void words. There are some nice features here and variations of gameplay styles from a top-down view of the board to a more isometric view and even the ability to zoom out to a table top view complete with photographic sceneries in the background. You can also change the colour schemes of the board and tiles, plus create your own rules to add a touch of variety. 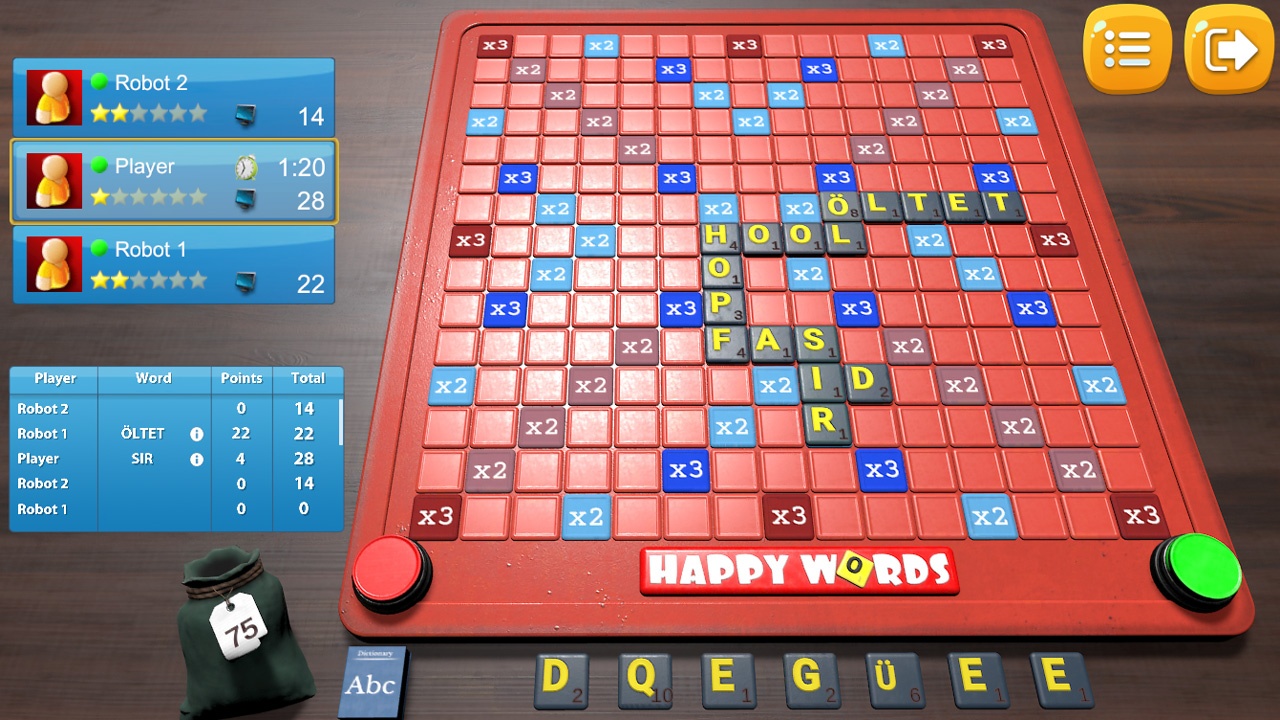 As far as board game simulations, or even puzzle games go, Happy Words does a good job of recreating the formula upon which it is based; at least in terms of board placements and score tallies. However, a few questionable control options can take time to get used too, such as depressing the left joy-con to change the directional flow of your text from a horizontal plane to a vertical one and the use of the right joy-con to move your cursor. Some of this can be alleviated with full touch-screen support, but the main fundamentals of its execution can still remain fiddly. Playing solo can also produce some frustrations, as at times, the AI can take up to five minutes or more to make their move; leading to a disjointed playing style rather than a free-flowing game. Again, this can be alleviated with some of the personalisation options, but this merely presents an easier challenge as the AI often misses a move due to your added time constraints.

Although the game presents a fairly decent experience for the solo player, it’s in its multiplayer capacity that the game plays infinitely better. As a couch multiplayer game, the game simply excels, mimicking perfectly the premise of playing the Scrabble board game. Its a game mode that is also enhanced with the customisation options that are available and adds a good deal of long-term playtime. However, in its real-time online capacity, the function in which the game if most touted for, it simply failed to produce any lobbies for me to try over the period with which I had the game for its review purposes. Even more worryingly here, was the fact that this was within its release window and not down to the fact that that game hadn’t been released yet. With luck, its lobbies may become more occupied or hopefully, add a cross-platform capability. (I was unable to find any information on whether the game already incorporates this or not).

Overall, Happy Words does do a good job of replicating the formula of playing a Scrabble game. With a wealth of customisation and options, there is more than enough here to keep any word enthusiast entertained for the long-term. This is further bolstered with the ability to play over various multiplayer modes, although the lack of any online lobbies is a bit worrying. However, that’s not to say that this isn’t a game that doesn’t come without its problems, some of which I encountered were words within its dictionary that still weren’t accepted and worst of all, the AI opponents taking so long to take their turns; playing against three AI players, each taking in excess of five minutes to make their move, left me staring at a motionless screen for up to fifteen minutes each go, creating a stop-start game that soon began to drag. If you’re considering getting the game to play with friends, family or partners, then there’s a really entertaining game here, but for solo players or those looking for an online experience, there simply weren’t any letters that I could find to create a word to describe it.

Happy Words writes a love letter to the classic board game, Scrabble, but only in its couch multiplayer. For solo or online players, it simply writes a letter of despair.